Background: Hepatocellular carcinoma is one of the most common cancers in the world due to its association with chronic hepatitis infections. Amongst the most usual metastasis of hepatocellular carcinoma are the lymph nodes, the lungs and the bones. Soft tissue metastases are extremely rare.
Case presentation: Herein, we report the case of a 73-years-old male patient who presented with cervical and upper extremities muscle pain along with paresthesias and a palpable mass on the cervical region.
Conclusion: This unusual clinical manifestation along with the above-described rare presentations of hepatocellular carcinoma must be taken into account, especially among patients with chronic hepatitis infections.

Hepatocellular carcinoma (HCC) is usually found among patients with chronic hepatitis B or C infection, autoimmune hepatitis, steatohepatitis, primary biliary cirrhosis and sclerosing cholangitis1-3. Its’ frequently encountered metastasis include the lymph nodes, the lungs and the bones. Metastases to the muscles or the subcutaneous tissues are extremely rare. Although hepatocellular carcinoma’s bone metastases are well-described, metastasis to the skeletal muscle is an infrequent phenomenon. This infrequency could be explained by the increased contractility action of the muscle, its local pH environment, and the presence of tumor suppressors in the skeletal muscles4. This report describes a chronic hepatitis B patient, who presented with pain and paresthesias of the upper extremities and the cervical region, where a palpable mass was located.

A seventy-three years-old man presented to the hospital due to pain and paresthesias in the cervical region and the upper extremities.

From his past medical history, the patient had chronic hepatitis B infection for thirty-five years, for which he had not received any surveillance at all. He was considered high-risk for developing hepatoma, regarding the very long duration of chronic hepatitis B infection. On clinical examination, the patient was afebrile, while tachycardia was present along with pain and paresthesias in the cervical region, which had spread to the upper extremities, too. In addition, the patient had a palpable, painful soft-tissue mass in the cervical region and palpable, but painless liver. Despite the existence of a palpable cervical mass, the patient’s major complain, which brought him to the emergency department of the hospital, was his immense pain along with paresthesias and lack of strength in his upper limp. C3-C6 dermotomes were affected, which were responsible for the pain and lack of strength of scalene, biceps and triceps muscles. His neurological examination had no other pathological findings (plantar reflex was normal, while no clone was present). The patient underwent a cervical CT scan, which demonstrated the mass that had invaded C6 and C7 vertebrae and was protruding into the spinal canal (Figure 1). Abdominal ultrasound revealed disruption of the normal architecture of the liver, with the presence of multiple lesions, amongst which the largest had diameter 5.5 cm. After intravenous administration of INN-sulphur hexafluoride, this largest lesion was attenuated in the arterial phase, while the INN-sulphur hexafluoride disappeared at the portal phase. The liver ultrasound (sonovue) was compatible with cirrhosis along with the existence of a mass that was suggestive of hepatoma. Serum alpha fetoprotein levels were 98.64 ng/ml (normal range 0-15ng/ml). Biopsy specimens were obtained from this lesion as well as from the cervical mass. Both biopsies were -morphologically and after immune-staining- compatible with hepatocellular carcinoma of low grade differentiation and histologically grade III according to Endmondson and Steiner5. Histologically, the cells of both tissues had median to severe nucleus atypia and severe mitotic activity, findings suggestive of a carcinoma. Immune-staining was positive for glypican-3, CK8.18 and CD34, findings that were compatible with hepatoma (Figures 2 and 3). 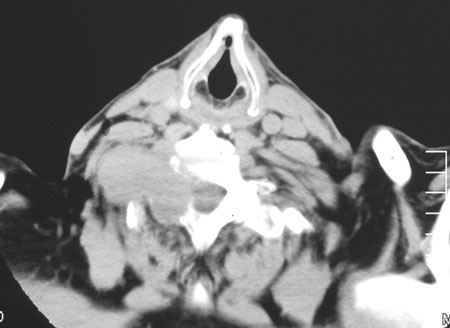 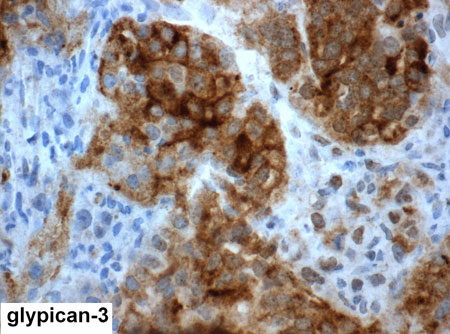 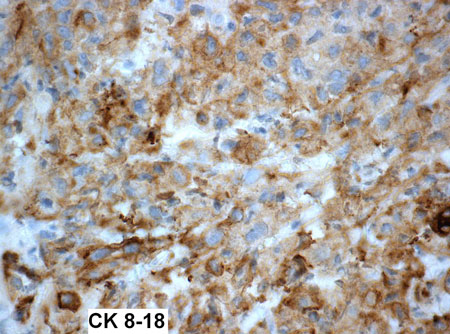 Figure 3: Immune-histochemistry for CK8.18 antibody had a granular cytoplasmic staining pattern, which is characteristic of hepatoma (CK8.18, x600).

The patient was assessed by an oncologist, who suggested radiation therapy of the cervical mass. Indeed, the patient underwent radiation therapy of the cervical mass and was later transferred to the oncology department of our hospital for further treatment. The patient received chemotherapy with doxorubicin and tamoxifen. At the latest follow-up six months post-diagnosis, he is still alive, able to serve himself and not suffering from intense pain.

Hepatocellular carcinoma (HCC) is one of the most common malignancies in the world. It is associated with hepatitis C virus (HCV), hepatitis B virus (HBV), other hepatitis viruses, autoimmune hepatitis, steatohepatitis, primary biliary cirrhosis and sclerosing cholangitis. Most of the HCC have occurred on the basis of cirrhosis. Chronic hepatitis B infection is the most common etiological factor for hepatocellular carcinoma1-3. If untreated, HCC is a rapidly fatal disease with mortality rates approaching 95% within six months of diagnosis. The poor survival reflects the aggressive nature of hepatocellular carcinoma, related to its propensity for hematogenous dissemination, together with the extent of the disease at the time of its presentation.

Extra-hepatic metastases occur in approximately 42% of cases and are most commonly conferred to the lungs, central nervous system, regional lymph nodes, bone, adrenal glands and pancreas6-8. Together, metastatic disease to the bones and muscle accounts for approximately 16% of all extra-hepatic HCC metastases, and it is associated with advanced disease.

Bones and spinal metastases from HCC have been documented9-12. Although HCC bone metastases are well-described, metastasis to the skeletal muscle is an infrequent phenomenon13-14. This infrequency could be explained by the increased contractility action of the muscle, its local pH environment, and the presence of tumor suppressors in the skeletal muscles4.

Recently, palpable masses in the right scapula and the neck with associated cervical pain have been reported to reveal the presence of hepatocellular carcinoma8. Also, recurrence of HCC has been demonstrated by a painless subcutaneous mass in the humerous muscle15.

Despite diagnostic and treatment advances, improving patient survival is highly dependent on maintaining a high degree of suspicion and early disease detection16. Optimal management of any soft tissue mass comprises of complete clinical assessment, appropriate radiological investigations, and sampling of the mass for histological examination. Metastasis of HCC should be included in the differential diagnosis of rapidly growing lesions in unusual localizations. Adherence to such protocols avoids inappropriate surgery and allows a planned therapeutic algorithm.

To our knowledge, cervical and upper extremities muscle pain with paresthesias as the presenting symptom of hepatocellular carcinoma has not been described before. This unusual clinical manifestation along with the above-described rare presentations of HCC must be taken into account, especially among patients with chronic hepatitis infections.