Cerebral venous thrombosis (CVT) is a clinical condition which is caused by the partial or complete occlusion of the dural sinuses and cerebral veins. Cases of associated CVT and multiple sclerosis (MS) have been reported and CVT development has been attributed to the previous lumbar puncture (LP) in majority of these cases. We report a case of 32-year-old woman with no previous history of recent LP, who developed CVT after high dose intravenous methylprednisolone and discuss the possible role of high dose steroids in development of CVT in MS patients.

Cerebral venous thrombosis (CVT) is a clinical condition that results from partial or complete obstruction of the dural sinuses and cerebral veins. Symptoms and clinical course are variable and several factors are involved in its etiology1.

We here report a case of 32-year-old woman with a definite diagnosis of MS with no previous history of recent LP, who developed CVT after high dose intravenous methylprednisolone and discuss the possible role of high dose steroids in development of CVT in MS patients.

A 32-year-old female patient with a diagnosis of relapsing-remitting MS for 7 years presented with numbness and weakness in both legs. The patient first experienced numbness in the left side of her face in 1996, and double vision in 1998 and 2002. These complaints resolved spontaneously within 15 days. The patient presented to our clinic with double vision in 2004 and was diagnosed with MS and started on interferon beta 1b 44 mcg therapy. At subsequent follow-ups she complained of numbness in both hands and legs in June 2006, numbness in the left arm and leg in June 2008 and numbness in both legs in August 2009. During these attacks, she received intravenous (IV) methylprednisolone at a dosage of 1 g/day for five days. There was no history of alcohol, cigarette or oral contraceptive use, diabetes, obesity or any other systemic disease.

On admission, she had numbness and weakness in both legs. Physical examination was normal. At neurological examination, consciousness, orientation and co-operation were normal, speech was normal, vision 20/20 in both eyes, eye movements were normal in all directions, and other cranial nerves, brain stem functions, bladder and bowel functions were normal. Muscle strength in both upper extremities was normal, and 4/5 in both lower extremities. Deep tendon reflexes were hyperactive in the upper and lower extremities, with bilateral extensor plantar responses. Sensory examination revealed reduced sensation of light touch and pain below thoracic level 10, and decreased vibration in both lower extremities. Expanded Disability Status Scale (EDSS) score of the patient was 3.5. Cerebral MRI revealed hyperintense, non-contrast enhancing, chronic demyelinating MS lesions on T2 and FLAIR images in the bilateral periventricular and deep white matter, the corpus callosum, the right part of the mesencephalon and the right cerebellar peduncle. There was no signal change suggestive of venous sinus thrombosis (Figure 1). Cervical MRI revealed a hyperintense, non-contrast enhancing, demyelinating MS lesion approximately 3.5 cm in size at the level of vertebrae C 5-6-7. Thoracic MRI was normal. Full blood count, sedimentation and CRP, serum electrolytes and liver and kidney functions were all normal. The patient was started on a high dose (1 g/day) of IV methylprednisolone for MS attack theraphy. On the fifth day of iv methylprednisolone therapy, constant and severe headache began, involving the entire head but more distinctly the left side, accompanied by nausea and vomiting. No change was observed at neurological examination, and fundoscopic examination was normal. The left transverse sinus was hyperdense at cranial CT (Figure 2). Cranial MRI and MRI venography was performed with a preliminary diagnosis of venous sinus thrombosis and thrombosis in the left transverse and sigmoid sinus was determined (Figure 3). There were no findings suggesting an infective condition and the patient was started on iv heparin therapy. 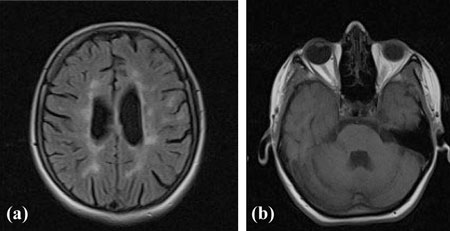 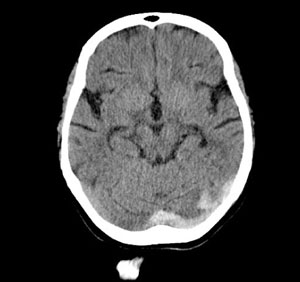 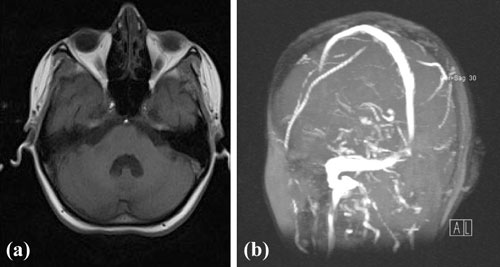 After 5 days of heparin, the patient continued with oral anticoagulant therapy and the headache declined significantly within 1 week. The patient was discharged with oral anticoagulant therapy, and the headache disappeared entirely after 2 weeks. Cerebral MRI and MRI venography performed 3 months later revealed recanalization of the the left transverse and sigmoid sinus (Figure 4). Repeated investigations of other thrombotic factors also revealed no abnormality on follow-up of the patient, which supported the role of steroid therapy in the development of CVT in our patient. 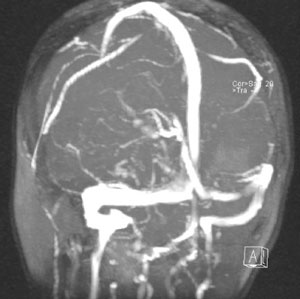 CVT is a rare disease which may be related to several etiological factors, including infectious or inflammatory diseases, pregnancy, puerperium, intracranial tumors or neoplastic diseases, trauma, dehydration, coagulation abnormalities and drugs; the underlying cause in 20%-30% of cases cannot be determined1.

MS cases developing CVT have been reported in the literature. Kalanie et al have reported that CVT may occur with an estimated incidence of 0.58 % following steroid administration in MS patients with no other risk factors2. The question of whether LP and high-dose steroid therapy are predisposing factors for the development of CVT in MS patients has been debated. High-dose steroid therapy given after LP before the development of CVT has been held etiologically responsible in the great majority of reported cases. It has been suggested that LP leads to decreased cerebrospinal fluid pressure and downward displacement of intracranial vascular structures and injury in the dural sinus wall, venous vasodilation, stasis and thrombosis as a result2-8. There was no history of recent LP in our case. In addition to LP and high-dose steroid therapy, the role of MS by itself in the development of CVT has also been debated. MS is an inflammatory disease of the central nervous system with no systemic involvement. While MS patients that developed CVT in the absence of LP, high-dose steroid therapy or any other risk factor have been reported, these few reports might suggest a greater possibility of the two diseases developing coincidentaly4. The literature contains no significant data corroborating a direct relationship between MS and CVT.

Although high-dose steroid therapy is widely used in many neurological diseases, few cases suggesting that the treatment can induce CVT have been reported. LP prior to steroid therapy has been held responsible for CVT in some reported cases, and other accompanying risk factors in others4,7-10. The absence in our case of a history of cigarette or oral contraceptive use, diabetes, venous thrombosis or other systemic or inflammatory disease that might represent a risk for thrombosis, the absence of any finding of dehydration or that might indicate an infective condition and all tests being within normal limits led us to exclude all other etiological factors for CVT. Although interferon therapy itself also has been reported to be a risk factor for a hypercoagulable state, to our knowledge there is no previous report of CVT attributed to interferon therapy in MS patients11. Also the close time relationship between the onset of CVT and steroid therapy in our patient has again supported the role of steroid.

Although it has been suggested that steroid therapy may play a procoagulant role in the development of CVT, its role is not known for certain1. Cushing syndrome, in which glucocorticoid levels are high, has been reported to be correlated with hypercoagulability, and the risk of venous thromboembolic event rises in Cushing syndrome patients. Although the pathogenetic mechanism of this predisposition to coagulation is not fully understood, increased von Willebrand factor, shortened aPTT, thrombin development and impaired fibrinolytic activity have been shown in Cushing syndrome patients12. In addition, an experimental animal study investigating the development of femoral head necrosis after high-dose steroid therapy reported that hypercoagulability developed with rising plasma fibrinogen levels 24 h after steroid therapy13.

In conclusion, the absence of any etiological risk factor that might predispose to thrombosis in our patient, no history of recent LP before CVT, the development of CVT immediately after the end of high-dose iv steroid therapy suggests that high-dose steroid therapy may be a risk factor for CVT in MS patients. Although it is impossible to definitively exclude the random, simultaneous development of the two diseases, care should be taken regarding clinical findings and symptoms that might suggest CVT during high-dose steroid therapy, especially in patients with additional risk factors, and the appropriate prophylactic therapies should be planned if required.

Authors have no conflict of interest.