Background: Tendon entrapment as a consequence of forearm fracture is rare. Only a few such tendon incarcerations have been described in the literature. Case Report: An 8-year-old boy presented with inability to extend the middle, ring, and little fingers of his right hand. Six months earlier, he had sustained an open Salter-Harris II distal radius and greenstick ulna fractures treated elsewhere with an external fixator and a Kirshner wire. After clinical evaluation, surgical exploration was decided. During surgery, the deep flexor tendons of these fingers were released from a bone canal proximally to the previous fracture site. Two years postoperatively, the patient presented with growth arrest signs of the palmar aspect of his distal radius. Shortening, epiphysiodesis of the ulna and epiphysiodesis of the radius were performed. Conclusion: Three tendons entrapped proximally to a previous fracture site is a unique incident. It indicates the need for a high level of suspicion to recognize and manage these severe complications timely. HIPPOKRATIA 2017, 21(1): 52-54.

Entrapment of flexor tendons in the callus following a distal radius fracture in a child is a very rare entity. Fifteen cases have been published so far1, most reporting one tendon entrapment, while two cases involved two tendons2,3. All incarcerations occurred at the fracture site. Another complication of a physis fracture is the growth plate arrest. We report a unique case of three deep flexor tendons’ entrapment proximally to the site of a previous displaced fracture of the distal radial epiphysis in an eight years old child which was further complicated, at a later stage, by growth arrest of the distal radius. Both complications were surgically treated.

An 8-year-old boy presented with inability to extend his right middle, ring, and little fingers (Figure 1A). On clinical examination, the range of motion of his wrist was almost diminished (no extension, 30o of flexion), and there was excessive scarring over the palmar aspect of his wrist. Plain X-rays of the wrist showed a radiolucent area within the distal radial metaphysis (Figure 1B and 1C). Six months earlier, he had sustained an open (Gustillo II) Salter-Harris II distal radius and greenstick ulna fractures, treated elsewhere with debridement, open reduction, and application of an external fixator and a Kirshner wire (Figure 2). Radial nerve dysfunction and Volkmann’s contracture were excluded and was decided to undergo surgical exploration. Intraoperatively, the deep flexor tendons of the middle, ring, and little fingers were found buried in a bony canal proximally to the previous fracture site (Figure 3A). The tendons were released from the surrounding connective and bony tissues (Figure 3B). The excessive scarring was excised, and the wound was reconstructed with a z-plasty, resulting in an excellent result (Figure 3C). 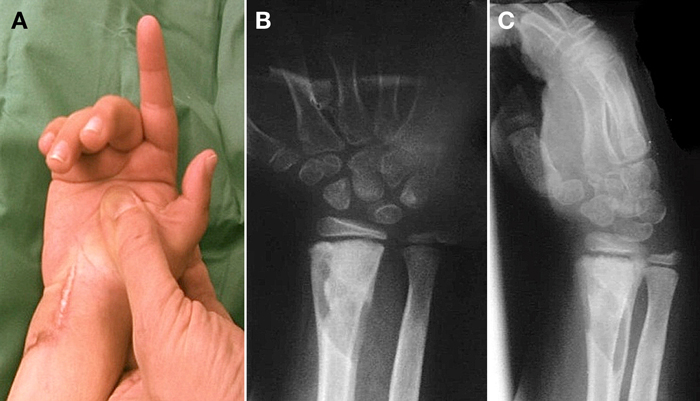 The child was lost to follow-up and presented two years postoperatively with apparent growth arrest of the palmar aspect of his distal radius. Clinical examination also revealed a diminished range of motion and grip strength (Table 1) and was decided to undergo a third operation during which shortening of the ulna and epiphysiodesis of both bones were performed (Figure 3D and 3E). Six months after his last operation, the boy was asymptomatic, and its wrist’s range of motion and hand strength measurements were improved (Table 1).

Figure 3: A, B) Intraoperative images showing the flexor superficiallis tendons been retracted on the radial side (yellow continuous arrow), and the entry and exit point of the entrapped profundus flexor tendons (green interrupted-line arrows). In image B the roof of the canal is opened and the tendons released, C) Postoperative image (2nd operation) demonstrating the full active extension of all the fingers postoperatively. D, E) Postoperative radiographs of the wrist (3rd operation; D: posteroanterior view, E: lateral view) demonstrating the shortening of the ulna and epiphysiodesis of both bones two years after the second operation.

Tendon entrapment as a consequence of forearm fracture is a rare entity, most commonly affecting the extensor tendons4. Regarding the flexor tendons, the flexor digitorum profundus (FDP) is the most commonly entrapped tendon1,2. Fifteen cases have been described so far reporting involvement of the flexors1. Deeney et al found a specific pattern of a short oblique fracture of the ulna with a spike of the proximal fragment in seven cases5. The spike was reported to have pierced the FDP muscle during closed reduction. In our case, neither the fracture type nor the type of entrapment found approximate that pattern. The tendons’ entrapment seemed to be more proximal to the previous fracture site. It could be explained by the new bone formation in the metaphysis following the initial injury, entrapping the tendons. Also, we examined the patient six months after his injury, when the elongation of the metaphyseal bone could have possibly made the tendons’ entrapment to appear more proximal to the fracture site.

Regarding the diagnosis of this rarity, it should be differentiated from radial nerve injury, Volkmann’s syndrome, or tendon contracture/stiffness unrelated to the fracture. To identify, whether the tendon has been engulfed near the fracture site, due to new-born tissue related to the healing process, or is passing through the bony fragments, a thorough clinical examination and a magnetic resonance imaging scan may be of help. Plain radiographs can be indicative of entrapment, as in the reported case, with a visible bone tunnel. Post-traumatic cystic lesions, although rare, have been reported and must be differentiated6,7. Painless restriction of passive finger extension shortly after application of a cast, and nerve palsies that persist on follow-up even after rigorous hand therapy require further investigation.

In the reported case, the fracture was also complicated by growth arrest of the distal radial growth plate. This complication is probably associated with the amount of energy that passed through the growth plates during the injury8. It is known that the K-wires used for fixation do not cause substantial damage to the physis9. Growth plate arrest is a well-defined incident that can develop following significant energy passing through and damaging the physis cells8,10. Physis arrest of the radius leads to an ulnar-positive variance at the wrist. If the developmental difference is symptomatic, treatment aims at accomplishing a level joint8. In our case shortening and epiphysiodesis of the ulna were performed, along with epiphysiodesis of the intact portion of the distal radius. A corrective osteotomy for the palmar tilt of the radius was not performed, as the final correction will be decided if needed when the patient will be skeletally mature.

When dealing with decreased finger range of motion in the forearm region, a high level of suspicion is necessary. The orthopedic surgeon should always differentiate tendon entrapment from the more common Volkmann’s syndrome. Surgical exploration and release of the tendon from the involved area is the only option in such cases. Dissection near the bony and other newly-formed tissues can be challenging, and recognition of any adjacent neurovascular structures is essential before freeing the tendons. If there is a bony gap after the tendon release, bone grafting should be considered. When a growth plate injury is suspected, the patient and his parents should be informed regarding the potential complication and advised to be re-examined should any new symptoms or malalignment occur.