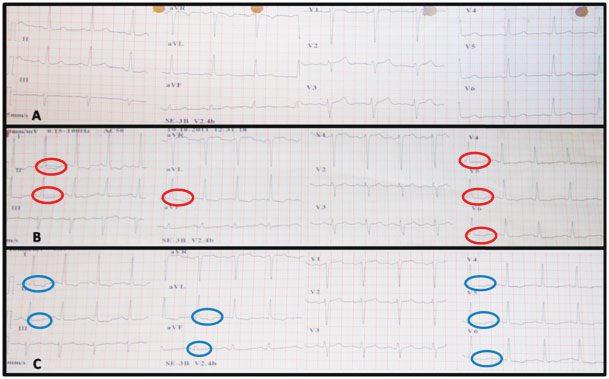 Major cardiovascular toxicity (cerebral ischemic infarction, peripheral arterial thromboembolism, myocardial infarction) of bleomycin appears to be lower than 1%3. An acute chest pain syndrome, self-limiting with no apparent etiology or complications, is also described with a frequency of about 3%4. Although rare, acute chest pain and myocardial infarction cases during bleomycin chemotherapy have been described in the literature5-10. Patients having predisposing risk factors for cardiovascular disease seem to face a higher risk3.

The pathophysiologic mechanism of the acute chest pain described during bleomycin infusion remains unclear. Serosal inflammation, manifesting as acute pleuropericarditis as part of the more generalized mucocutaneous toxicity common to bleomycin therapy, could be a possible explanation. A vascular etiology for the pain has also to be considered, since other pulmonary vascular diseases, such as pulmonary hypertension and pulmonary embolism may cause both substernal and pleuritic chest pain even in the absence of infarction4. Further courses of bleomycin are not contraindicated, however it seems reasonable to stop the drug in those with intolerable pain or ECG changes4. Slowing the rate of infusion, analgesics and (if indicated) anti-ischemic treatment should be applied for relieving the patient and preventing further complications3,4,6.

We report here a case of a young woman presenting with atypical chest pain during bleomycin infusion and ECG signs of myocardial ischemia. Anti-anginal agents were immediately administered, improving clinical presentation, while antithrombotic treatment was initiated to prevent thrombus formation in the coronary circulation. Cardiac enzymes remained negative and echocardiographic findings showed no regional abnormality. The patient had no recurrence of the chest pain and bleomycin was excluded from future therapy.

Cardiovascular complications pose a rare but potential fatal adverse effect of BEP chemotherapy and should be carefully addressed, especially in patients with additional cardiovascular risk factors11-13. Physicians dealing with bleomycin-based therapies may find this knowledge useful for a more comprehensive evaluation of chest pain syndromes in those patients.

The study has been presented as a poster at the 18th Panhellenic Congress of Clinical Oncology, 26-28 April 2012 in Athens, Greece.