Human ovary is known to contain polyovular follicles. Most of the reports come from IVF programs1-5.

Here, we describe four cases of binovular complexes found during follicular punctures in the IVF Unit of the General University Hospital of Alexandroupolis, Greece. In three cases, oocytes contained in binovular follicles were fertilized in order to test the developmental potential of the generated embryos.

Description of the cases

Three of the cases were referred to the IVF Unit because of male factor infertility and one because of unexplained infertility. The age of women ranged between 22 and 33 years. A short GnRH-agonist protocol was applied in two cases and a long GnRH-agonist protocol was applied in the other two. Triptorelin (Decapeptyl, Ferring GmbH, Kiel, Germany) was used for hypophysis down regulation at daily doses of 0.1mg (short protocol) or depot 3.75 mg (long protocol). Human menopausal gonadotrophins (Menopur, Ferring GmbH, Kiel, Germany) were used for ovarian stimulation. The oocyte retrieval took place 35-36 hours post administration of 10,000 IU of human chorionic gonadotrophin (Pregnyl, Organon, Oss, The Netherlands), under anesthesia and ultrasonic guidance. The mature oocytes from binovular complexes were fertilized with intracytoplasmic sperm injection (ICSI) and the developed embryos were cultured, with sequential media (Origio, Jyllinge, Denmark).

In each of the four cases, a binovular complex was found. In three binovular complexes, the two oocytes were surrounded by zona pellucida having a common part of zona between them; it seemed as the two zonas were fused (Figures 1a and c). In one complex (3rd case), the two oocytes were included in the same zona pellucida without having a part of zona between them (Figure 1b). 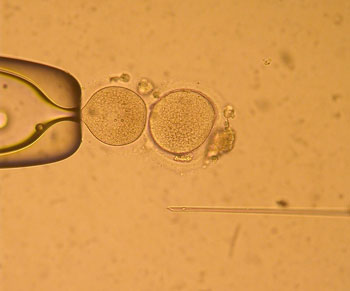 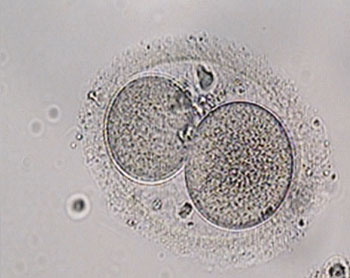 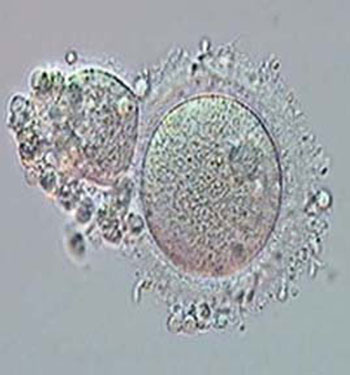 Figure 1: Binovular complexes; a) a mature and an oocyte at GV stage (2nd case), b) both oocytes are mature (3rd case), c) a mature oocyte and a considerably smaller immature oocyte attached to the mature one (4th case).

In the first case, the woman was 33 years old. She underwent ovarian stimulation with a short GnRH-agonist protocol due to male factor infertility. At the day of oocyte retrieval, 18 oocytes were collected of which 14 were mature. Both oocytes of the binovular complex were mature (MII). They were successfully fertilized but they did not developed into embryos.

In the second case, the woman was 32 years old suffering from unexplained infertility. She followed a short GnRH-agonist protocol and 17 oocytes retrieved of which 11 were mature. In the binovular complex found, one oocyte was at metaphase II and the other was at germinal vesicle (GV) stage (Figure 1a). The mature oocyte was successfully fertilized and developed an embryo, which appeared with four cells (grade II due to unequal blastomeres) at day 3. Its development stopped at this stage.

In the third case, the woman was 22 years old and without any apparent pathology. She underwent ovarian stimulation with a long GnRH-agonist protocol. At the day of oocyte retrieval, 16 oocytes were collected of which 13 were mature. In the binovular complex, both oocytes were mature, surrounded by the same zona pellucida without having any part of it between them (Figure 1b). With this configuration the immobilization of the oocytes with the holding pipette was not possible, thus ICSI was not performed.

In the fourth case, the woman aged 27, underwent ovarian stimulation with a long GnRH-agonist protocol due to male factor infertility. Eleven mature oocytes were recovered. In the binovular complex, one oocyte was mature whereas the other was considerable smaller, less than half of the normal the size, at metaphase I. The second oocyte had a thin zona pellucida seemed to be attached to the zona of the mature oocyte (Figure 1c). The mature oocyte was successfully fertilized. At day 2, it had six cells with considerable fragmentation; at day 3, it had eight cells and increased fragmentation; it failed to develop further.

None of the embryos generated from binovular complexes was transferred.

Two convincing hypotheses have been suggested for the existence of multiovular follicles. According to the first, a multiovular follicle is the result of accidental development when oocytes lying in close proximity fail to be separated by connective tissue1. The second hypothesis suggests that binovular follicles are generated through an abnormal meiotic division2.

It is reasonable to presume that during ovarian stimulation the exogenously administrated gonadotrophins increase the incidence of abnormal follicles, including binovular ones. This notion is supported by the cases presented here: In all the four cases, the common element was the high response to ovarian stimulation; this was evident by the high total number of collected oocytes.

In binovular complexes presented here, at least one oocyte was mature. According to our observations, the mature oocytes of binovular complexes although can be fertilized successfully and develop cleaved embryos, their developmental potential seems to be deficient, thus, a priori, they should be considered as abnormal.

In conclusion, the cases reported here indicate that binovular follicles are more possible to appear in women with a good response to ovarian stimulation. The mature oocytes contained in binovular complexes can be fertilized but their developmental potential is limited.