Introduction: Cardiopulmonary resuscitation (CPR) is the most important intervention that connects the cardiopulmonary arrests (CPA), to life. Ultrasonography (USG) is used to detect the presence of cardiac activity during CPR.
Methods: Files of the patiens, admitted to Kayseri Training and Research Hospital during one calendar year (2011) and suffered CPA were retrospectively evaluated by using hospital information management system. Patients enrolled in the study should have arrival electrocardiogram and cardiac ultrasound performed and recorded.
Results: A total of 410 patients were included in the study. When we examined the cardiac rhythm on arrival, 290 patients (70.7%) had asystole, 45 (11%) patients had ventricular fibrillation/ pulseless ventricular tachycardia (VF/pVT) and 75 (18.3%) patients had pulseless electrical activity (PEA). Twenty-four hour survival rates of the groups that the cardiac activity was detected with USG on arrival to the Emergency Department were: 2 patients in asystole group, 35 patients in VF/pVT group and 44 patients in PEA group.
Conclusions: Usage of USG during CPR in order to evaluate cardiac contractility, increases the success rate of accomplished CPR.

Cardiopulmonary arrest (CPA) is the main cause of death in many parts of the world in spite of significant improvements in treatment1. CPA patients have a high mortality rate2. Cardiopulmonary resuscitation (CPR) is the most important intervention that connects the CPA, to life1. Usage of the bedside ultrasound (USG) in the emergency department by emergency medicine specialists began at the late 80s with trauma patients, and expanded rapidly over the last ten-years2-8. USG is also used to detect the presence of cardiac activity during CPR and for invasive procedures (intubation, central/femoral vein catheterization, etc.)2,4,6-12. Although USG usage in patients undergoing CPR is limited, it has a high predictive value to determine the absence of cardiac activity2,9. From a different point of view, the presence of cardiac activity in USG is associated with the return of spontaneous circulation (ROSC)12. The use of USG is not routinely recommended in the 2010 CPR guidelines8,13. The most important factor restricting the use of transthoracic USG during CPR is that one has to pause chest compressions8,13. On the other hand, the use of USG during CPR can help the physician to decide quickly2,13. Transthoracic USG is very useful in detecting reversible mechanical causes of asystole and pulseless electrical activity (PEA)13. The chances of survival of patients with PEA arrest rhythm is quite low14. USG can be used to determine the cause of arrest in PEA and asystole during CPR14,15. In order to evaluate survival, a cardiac sonography can be quickly and successfully integrated to the CPR14,16,17.

All of the patients who were admitted to the Department of Emergency Medicine of Kayseri Training and Research Hospital, were evaluated and treated by emergency physicians. All of the emergency medicine specialist physicans have experience in bedside USG and are certificated. The study was granded permission by Kayseri Training and Research Hospital Education Planning Board (date: 20/06/2012 and number: 2012/7). Patient files admitted to Kayseri Training and Research Hospital Training And Research Hospital during one calendar year (from 01.01.2011, until 31.12.2011), who suffered CPA, were retrospectively evaluated by using hospital information management system (HIMS). In order to include eligible patients in the study we defined three inclusion criteria: 1) age over 18, 2) presence of arrival electrocardiogram of the patient and 3) cardiac USG performed at patient’s arrival. Patients who had an arrival electrocardiogram recorded and a cardiac USG performed at arrival were enrolled in the current study. Patients whose cardiac rhytm was not recorded or a cardiac USG was not performed at arrival were excluded from the study. USG examinations were performed using a CHISON 8500 with a 3,5 MHz curvilinear transducer (Chison Medical Imaging Co. Ltd, China) (Figure 1). 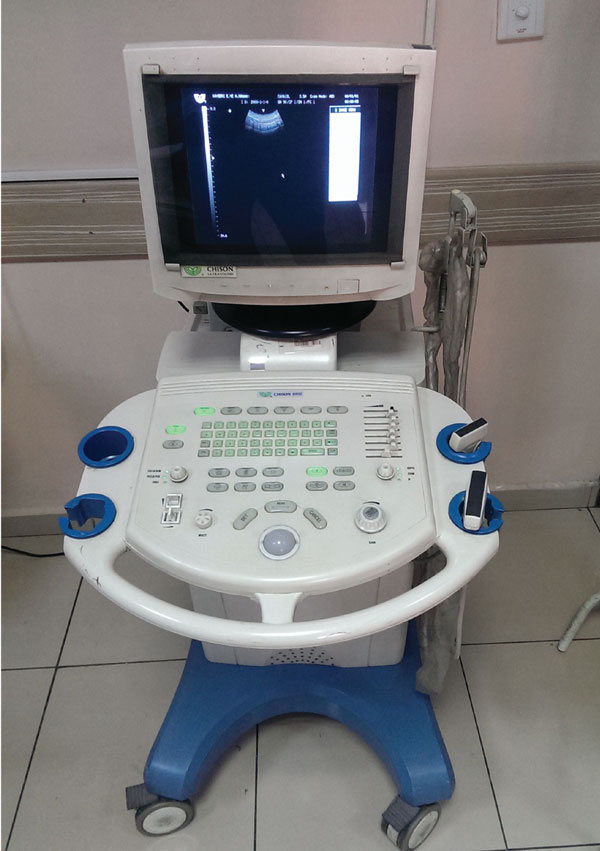 Figure 1: Ultrasound device CHISON 8500 with a 3.5 MHz curvilinear transducer which is used for bedside ultrasound in the emergency department.

All patients’ data were analysed with SPSS version 16.0 for Windows (SPSS Inc., Chicago, IL, USA). Quantitative and qualitative data was expressed with mean ± standard deviation, median (min-max) and rate (%), respectively. For the qualitative data the Chi-square test was used, while for the quantitative data, the Mann-Whitney U and Kruskal Wallis test were used. In order to control if the quantitative data conforms to a normal distribution, we used the Kolmogorov-Smirnov test. In all statistical analysis, p value <0.01 was considered significant. Multivariate logistic regression analysis was performed among the groups.

During 2011 all CPRs’ were performed by four Emergency Medicine specialist physicians. All the Emergency Medicine specialist physicians are certified for the use of emergency ultrasonography and have enough experience. In our department we routinely monitor the presence of cardiac activity by USG in arrest patients, which is recorded. Adult patients over the age of 18 years, who were brought to the emergency room with CPA or suffered CPA in the emeregency department, from 01/01/2011, until 31/12/2011, were eligible to be enrolled in the study. The total number of patients who attended the emergency department during that one year period was 435,375. A total number of 483 cases of CPA were interfered by CPR in the one year period. Data was obtained from patients’ files and from the HIMS. Seveny-three out of the 483 arrest cases were excluded from the study because they did not fulfill the inclusion criteria. A total of 410 patients were included in the study.

When we examined the cardiac rhythm on arrival, 290 patients (70.7%) had asystole, 45 (11%) patients had ventricular fibrillation/pulseless ventricular tachycardia (VF/pVT) and 75 (18.3%) patients had pulseless electrical activity (PEA). Results for the out-of-hospital patients (n=348, 84.8%) were asystole 285, VF/pVT 25, PEA 38. Stratified according to the initial arrest rhythm, clinical characteristics (duration before CPR, CPR duration, presence of cardiac activity, and 24-hour survival) are shown in Table 1. There was no significant difference in terms of age (p=0.37) and sex (p=0.15) according to rhythms of arrival. Duration to initiate CPR was significantly longer in asystole group compared to VF/pVT and PEA groups (p=0.001) but there was no significant difference between the PEA and VF/pVT groups (p=0.016). CPR duration of asystole group was significantly longer compared to VF/pVT group (p=0.001) but there was no significant diffence between VF/pVT and PEA groups (p=0.38). Asystole group was significantly higher in cases of out of hospital CPA (p=0.001). The presence of cardiac activity by USG (p=0.001), successful resuscitation/ROSC (p=0.001) and 24-hour survival (p=0.001) were significantly lower in asystole group in comparision to VF/pVT and PEA groups. There were no significant differences between VF/pVT and PEA groups in terms of presence of cardiac activity by USG, successful resuscitation/ROSC and 24-hour survival (Table 1). Twenty-four-hour survival rates of patients who had sonographic cardiac activity were significantly higher in all three groups (asystole, VF/pVT, PEA) (Table 4).

The success of resuscitation of patients with PEA or asystole requires considerable time and effort. Unfortunately, there is no consensus as to when to continue or terminate time of resuscitation. The purpose of USG in CPR is to evaluate cardiac contractility and increase the success of CPR9,12,18. Similar to previous studies, in the current study it was seen that the presence of cardiac contractility on cardiac USG at the beginning of CPR is associated with successful CPR and survival. There is insufficient evidence to refute the routine use of USG or predict the success of resuscitation, although this heart-focused USG has been shown to be used to identify cardiac activity during CPR2,9,12,13.

Some studies have indicated that the fast cardiac sonography can be used integrated with CPR14,16,17. In our study we have found that the rapid cardiac USG examination, which is performed in order to detect the presence of cardiac activity at begining of CPR, can be useful and gives information about the patient’s survival. It is very difficult to predict the rhythm of the CPA patient with PEA rhythm, if their monitor rhythm is real or false. It is quite difficult to decide how long to continue CPR in this patient population. In a study of Shoenberger et al, they have shown that cardiac sonography may be useful in deciding to terminate CPR in the patients with PEA rhythm19. Cardiac USG is used as a effective diagnostic tool to determine the causes of real asystole and PEA13. It is shown that there is a strong association between detection of sonographic cardiac activity and ROSC (resumption of a palpable pulse and blood pressure) and later survival rate12,18. In our study, presence of cardiac activity on USG was more frequent in VT/pVT and PEA rhythm groups compared to asystole. Hospital discharge rates and ROSC are higher in the patients whose arrival arrest rhythm is VT/pVT than in other rhythms1. In our study it has found that ROSC and 24-hour survival rates of the patiens whose arrival rhythm was VT / pVT and PEA are better than those in asystole group. We think that cardiac ultrasound control during CPR has a positive impact on the results of the CPR. When the multiple variables are considered all together, it was found that the presence of cardiac activity on USG is a valuable predictor of 24-hour survival.

Data of 73 patients (15%) were not availiable as all information was obtained from patients’ records. The most important limiting factor of the current study is its retrospective design. Due to this retrospective study design, only data of the first 24-hour survival could be derived and data of long-term survival could not be obtained.