Background: Neuroendocrine adenoma of the middle ear (NAME) is a rare benign glandular tumor with neuroendocrine differentiation arising from the middle ear mucosa. The common symptoms and clinical findings of this tumor are usually non-specific. When the tumor appears as a reddish retrotympanic mass, it can be misdiagnosed to be a paraganglioma.

Case description: A 38-year-old male presented with a 12-month history of left ear fullness and tinnitus. Otoscopy revealed a reddish retrotympanic mass with an intact tympanic membrane. The imaging demonstrated a soft tissue mass adjacent to the eardrum and the ossicles, compatible with a paraganglioma. The mass was surgically removed through a posterior tympanotomy. The histological and immunohistochemical examination showed the specimen to be a neuroendocrine adenoma. Four years after the operation, the patient remains without any sign of recurrence.

Conclusion: NAME is a rare tumor, mimicking tympanic paraganglioma, while its final diagnosis is only provided by histological and immunohistochemical analysis. HIPPOKRATIA 2017, 21(4): 201-203.

Neuroendocrine adenoma of the middle ear (NAME) or adenomatous tumor of the middle ear is a rare benign tumor1 accounting for less than 2 % of all ear tumors2. NAME usually appears in the 5th decade, without any sex predominance2. It arises from the middle ear epithelium, with epithelial and neuroendocrine differentiation and there are no specific clinical findings, while the definitive diagnosis is based on histology and immunohistochemistry1-3. 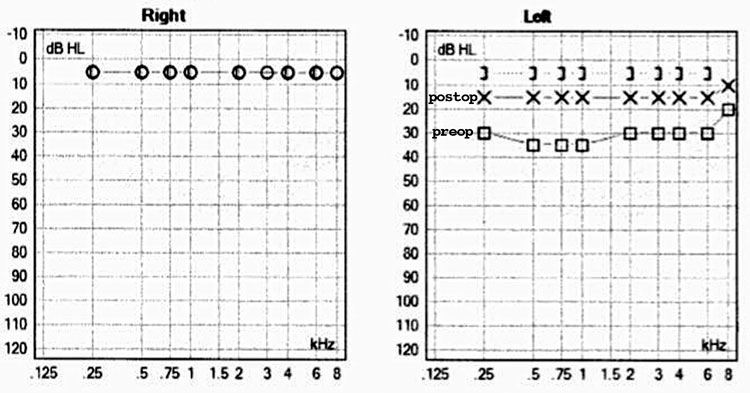 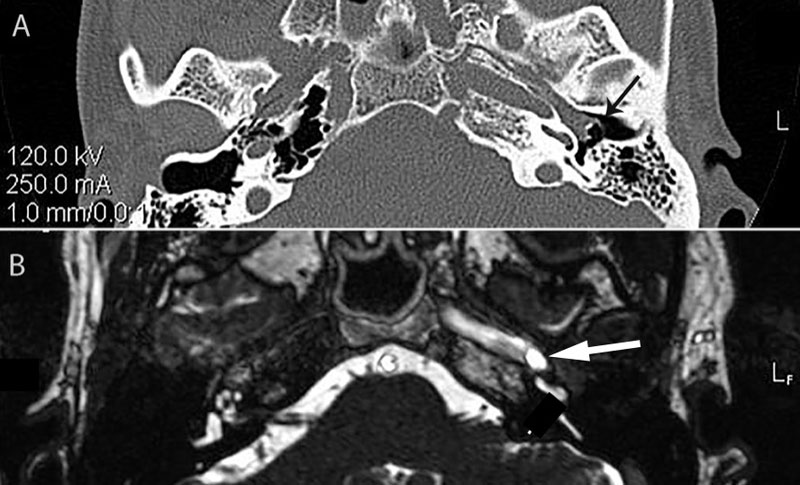 The mass was surgically approached through a left posterior tympanotomy. It was found to occupy the mesotympanum and hypotympanum with many adhesions, surrounded the ossicles without eroding them and was removed relatively easily in pieces without any intraoperative complications.

Histology and immunohistochemistry of the excised specimen showed to be a ΝΑΜΕ. The tumor was characterized by moderate-sized cells without any particular cellular diversity, in a loose cohesion, with a plasma-like appearance in diffuse growth, while immunohistochemistry was positive for cytokeratin CKAE1/AE3 and synaptophysin. Four years postoperatively the patient remains without any sign of recurrence in the MRI imaging (Figure 3).

NAME belongs to the benign glandular neoplasms that originate from the middle ear epithelium and was described in 1976 by Hyams and Michaels4,5. Until 1980, all these tumors were referred to as ‘middle ear adenomas’. In 1980 was described by Murphy the first carcinoid tumor of the middle ear, as a well-differentiated neuroendocrine glandular tumor with metastatic potential6. The term NAME was first proposed by Thompson and Mills in 2002 for a benign tumor with neuroendocrine differentiation7.

There is much discussion in the literature as to whether these three types are different clinical entities or a spectrum of the same entity with different degrees of differentiation in terms of neuroendocrine expression and the possibility of metastases. So there is a tendency to use the term Middle Ear Adenoma for all three types of these tumors. This is also reflected in the WHO classification in 2017 that uses this same term1,7.

The predominant symptom is conductive hearing loss, (the degree of which depends on the size and location of the tumor). Other infrequent symptoms are tinnitus, aural fullness, otalgia and even more rarely presents with facial nerve paralysis and otorrhoea10,11. Even with a neuroendocrine type tumor, there is almost never any clinical or laboratory evidence of neuroendocrine function1,9. Latif et al reported a case of carcinoid syndrome, with symptoms such as diarrhea, abdominal cramps, skin flushing, and bronchoconstiction10.

Otoscopically, the tympanic membrane is usually intact, with the mass located behind the eardrum. Depending on the color, the mass can be confused with, and incorrectly diagnosed as paraganglioma if it is red, or cholesteatoma if it is white12. In the reported case, due to the redness of the mass, the clinical diagnosis of paraganglioma was initially made, which was not questioned following the imaging studies.

There are no specific CT and MRI findings, but these imaging modalities are useful for assessing the extent of the disease, as well as the presence of erosion of the ossicles. These tumors rarely show osteolytic destruction of the ossicles, so it is helpful to make a differential diagnosis from cholesteatomas and adenocarcinomas.

Complete radical surgical excision is the treatment of choice for these tumors. The extent of resection depends on the dimensions of the tumor and whether the ossicles are eroded or not. Ιn the reported case, the tumor was easily removed so there was no need to remove the ossicles and the preoperative patient’s conductive hearing loss was improved postoperatively (Figure 1). However, if the ossicles are not removed the chances of recurrence are higher.

The final diagnosis is the result of the histological and immunochemical examination. Immunohistochemistry for a neuroendocrine tumor of middle ear adenoma includes chromografin-A-, cytokeratin (AE1/AE3)-, synaptophysin-, and chromogranin-positivity1,4.

All three types of middle ear glandular neoplasms have a very good prognosis. Types I and II do not give metastases, but they may recur. For Type I, recurrence or persistent disease occurs in 15 % of cases13. A long follow-up is considered to be necessary13.

In conclusion, NAME belongs to uncommon, well-documented neoplasms of the middle ear, with no specific symptoms or clinical presentation. Surgery is required for treatment, and an immunohistochemical examination defines the diagnosis. Recurrence is considered rare, but a long-term follow-up is necessary.

The authors declare that there is no conflict of interests regarding this publication.