Skip to content
hippokratia.gr > Volume 21 (2017) - Issue 4 > Metastatic spread of cutaneous melanoma to the sigmoid colon: a rare but important consideration

Background: Cutaneous melanoma is known for its aggressive tendency for metastasis, most commonly to lymph nodes, lung, liver, and brain.

Case report: We present the case of an 80-year-old male, with a history of cutaneous melanoma, found to have biopsy-proven metastatic melanoma deposits in the sigmoid colon. This rare case was initially thought to be a walled-off perforation secondary to diverticulitis. Although, computed tomography, showed features more strongly suggestive of malignancy. We propose early consideration of bowel metastasis in patients with a history of cutaneous melanoma presenting with lower gastrointestinal symptoms.

Conclusion: Once malignancy is included in the differential for any inflammatory type bowel lesion, arranging endoscopy and biopsy is essential to confirm the diagnosis and guide management. Multidisciplinary team discussion is recommended to determine the most appropriate treatment strategy – radical versus palliative, which must always consider the patient’s performance status alongside cancer staging. HIPPOKRATIA 2017, 21(4): 194-196.

Melanoma, defined as malignancy of melanocytes, is a form of skin cancer on the rise around the world, having increased by 360 % since the 1970s1. It is well recognized that cutaneous melanoma has an aggressive tendency for metastasis, with common sites being lymph nodes, the lungs, liver, and brain. Only 1-3 % of primary melanomas are metastatic to the colon2. Early staging allows a multidisciplinary team (MDT) decision-making regarding management options, including radical versus palliative treatment. We present a rare case of visceral metastasis from cutaneous melanoma, which initially appeared radiologically as an acute inflammatory condition. We discuss the role of computed tomography (CT) in distinguishing malignancy from inflammatory states, and how early action including arranging endoscopy is essential for both accurate diagnosis and appropriate treatment planning. Furthermore, the importance of interconnected PACS systems between Trusts and MDT discussion in cancer management is emphasized.

This case concerns an 80-year-old Caucasian male, with a background history of mild chronic obstructive pulmonary disease, chronic lymphocytic leukemia, and hypothyroidism. He was a former Royal Artillery driver in the Far East for two years in the late 1940s, during which he was often highly exposed to sunlight. The patient had first noticed a scabby lesion on his right forehead in the last ten years, but only presented to his General practitioner a year before as it had persisted and become painful. The lesion was subsequently removed and revealed to be melanoma. Unfortunately, the patient had local recurrent lesions, developed in the right preauricular region and left forehead. These were all surgically removed and reconstructed with skin grafts. Given the progression, the patient’s dermatologist arranged a positron emission tomography (PET)-CT scan, which revealed metastatic spread to cervical lymph nodes and the lungs. As such, following MDT discussion, according to the European Society for medical oncology (ESMO) guidelines3 and due patient comorbidities a palliative care strategy was decided. The patient underwent several cycles of palliative radiotherapy to the head and neck and systemic multi-agent therapy containing paclitaxel and carboplatin. The patient initially presented to our hospital four months before, with lower abdominal pain and diarrhea. His blood testing revealed white cell count (WCC) 15.9 x 109/L, and hemoglobin (Hb) 12.2 g/dL. He underwent CT of the abdomen and pelvis with intravenous contrast in portal venous phase, which was reported as acute diverticulitis with a walled-off perforation in the sigmoid colon region. He was treated with antibiotics, and his symptoms settled. He re-presented three months later with recurrent symptoms despite antibiotic therapy, and the blood tests showed WCC 16.0 x 109/L, C-reactive protein (CRP) 141 mg/L, and Hb 9.7 g/dL. A repeat CT revealed features strongly suggestive of malignancy (Figure 1A) as opposed to diverticulitis with walled-off perforation. The previously seen lymphadenopathy had persisted, which included a necrotic node adjacent to the sigmoid colon, again supportive of malignancy (Figure 1B). Lower endoscopy was arranged, and sigmoid colonic biopsies were performed. The results came back positive for melanoma (Figure 2), and MDT discussion determined that the cutaneous melanoma had metastasized to the sigmoid colon; thus, further palliative treatment was felt to be the best option given his comorbidities and known history of pulmonary metastases. Palliative treatment was continued following the patient’s discharge from the hospital. This included visits from the district nurse, and currently does not require additional care or transfer to a care home setting. Overall survival of patient from initial diagnosis was 21 months.

Figure 1: Axial computed tomography (CT) scans showing: A)Sigmoid metastasis (green arrow) on the initial CT (portal venous phase CT, with positive oral contrast having been administered beforehand). This was initially felt to be a walledoff perforation from diverticulitis; note several diverticula arising from the sigmoid, which has swayed the radiologist. The progressive size and eccentric wall thickening on the second scan are more suggestive of malignancy, B) Necrotic lymph node (green arrow) adjacent to the sigmoid colon. Necrotic and persistent adenopathy again suggests malignancy. 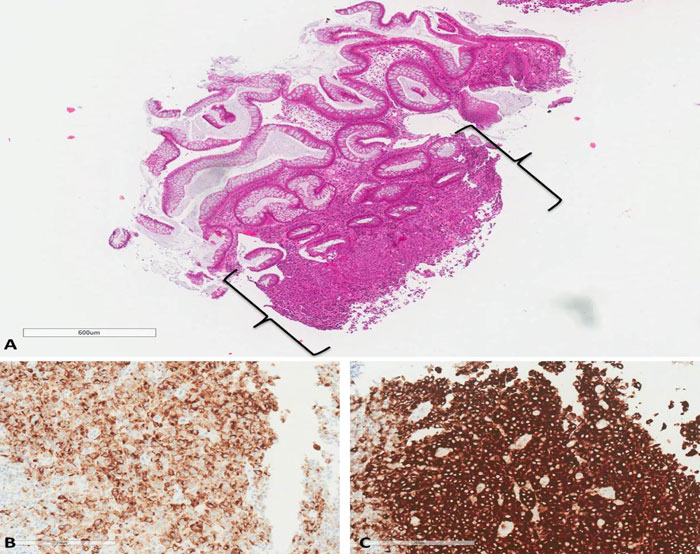 Figure 2: Images of sigmoid biopsy histology slides. Tumor (including the double braced region) is shown to infiltrate underneath large bowel mucosa, but the absence of surface dysplasia suggests this is metastatic as opposed to primary colonic carcinoma (A). Immunohistochemistry is positive for HMB45 (B) and Mel A (C) expression – confirmation of melanoma (internal scale bar on the images).

There were 14,509 new cases of melanoma in the UK in 2013, making it the fifth most common cancer1-3. The sharp rise in cases has been attributed to more UK families traveling to sunnier climates for holidays, thus being increasingly exposed to natural ultraviolet radiation. The increasing prevalence may also be due to better public awareness through the ABCDE melanoma campaign (Table 1), which has increased self-presentation to primary care physicians4. It is of great importance to diagnose melanoma early given the poor prognosis of advanced disease5-7. The main risk factors for melanoma include a family history of melanoma, sunlight exposure, pale skin, red or blond hair, greater number of nevi, and previous sunbed use before the age of 358,9. Gastrointestinal metastasis from cutaneous melanoma is a rare phenomenon, of which large bowel deposits represent a minority of reported cases (percentage of distribution: 9-15 % colonic vs 35-67 % small bowel vs 5-7 % stomach)10. However, it is worth noting that over a quarter of post-mortem cases of melanoma had evidence of gastrointestinal metastases, despite only 4 % having been diagnosed during life10,11. This could be due to many patients being asymptomatic from gastrointestinal metastases, prompting clinicians to actively seek out such deposits using modalities such as PET-CT, CT colonoscopy or direct visualization with endoscopy12. To our knowledge, there are only four other case reports of biopsy-proven large bowel metastasis from cutaneous melanoma13. Several important issues are raised in the reported case. The first is that an abscess or walled-off perforation secondary to acute diverticulitis can appear very similar to sigmoid carcinoma on standard portal venous phase CT. Of interest, a study by Goh et al, recommends the use of CT perfusion in this scenario, as cancer shows significantly higher blood flow and permeability, and shorter transit time in comparison to diverticulitis14. Furthermore, blood tests are nonspecific, as the raised inflammatory markers and WCC in our case can be attributed to either malignancy or diverticulitis. Therefore, history is essential in determining differentials and guiding patient management. Had sigmoid metastasis from cutaneous melanoma been considered at the time of the first scan, the endoscopy and correct diagnosis would have been concluded sooner and expedited palliative measures. Indeed, the literature supports the selective use of endoscopy post-diverticulitis in high-risk patients (e.g., age >50; history of previous malignancy; suspected mass lesion on CT) and in protracted courses of illness15. Metastasis of melanoma to large bowel is incredibly rare, which could dissuade radiologists from considering this in the differential diagnosis. Upon retrospective analysis of both CT scans, the persistent large (> 2 cm) necrotic lymph node adjacent to the sigmoid colon is beyond what would be expected from local inflammation, and this should trigger the concern about malignancy – particularly in the context of known metastatic melanoma to the neck nodes and lungs. Thus, the pattern and nature of lymph nodes should guide the radiologist in their differential. It is also important to mention the need to check the CT density (Hounsfield units) of any lesion arising from the bowel wall. The sigmoid lesion was thick-walled, returning a soft tissue density. The subsequent CT demonstrated increased wall thickness and dimension of the sigmoid lesion. A walled-off diverticulitis perforation would tend to be thin-walled, contain an air-fluid level, and not progress over time. A final point to consider is aiming for more unified patient care. This patient was looked after in three different healthcare Trusts, with resultant lack of continuity of care. This is an issue that differing healthcare Trusts need to address given the increasing movement of people during their lifetime, both nationally and internationally.

The Authors declare that there is no conflict of interest.

This research received no specific grant from any funding agency in the public, commercial, or not-for-profit sectors.