A 76-year-old man with Adamantiades-Behçet’s disease (ABD) presented with a ruptured abdominal aortic aneurysm (RAAA). ABD was diagnosed ten years earlier, and the patient was on long-term methotrexate and colchicine. Five years before this presentation, computed tomography (CT) scan demonstrated no abdominal aortic aneurysm (AAA). On this occasion, he had spent the previous two months in another hospital suffering from subarachnoid hemorrhage due to a fall. During his hospital stay, a CT revealed an 8 cm-diameter AAA and a 4.3 cm-diameter aneurysm of the right internal iliac artery (IIA). He was assessed by a vascular surgeon, and elective repair was planned. However, five days later, the patient suffered severe abdominal pain and collapsed. A new CT showed that the aneurysm’s diameter had increased from 8 to 9.5 cm with radiographic signs of periaortic hematoma. As there were no emergency endovascular facilities locally, the patient was referred to our vascular unit for endovascular management. On arrival, the patient was hemodynamically stable. An emergency endovascular repair was performed using a bifurcated Endurant (Medtronic) stent-graft with the right limb extending distally in the external iliac artery. He had an uneventful recovery and was discharged home on the 7th postoperative day. Follow-up imaging at 1, 12, and 18 months showed an excluded AAA, stable in size with no endoleak (Figure 1). ABD is an autoimmune disorder that involves multiple organs and classically causes oral and genital ulcers, in addition to ocular inflammation. Perivascular inflammation may lead to hemorrhage, stenosis, aneurysm formation, thrombus formation in both arteries and veins. Aortic involvement is one of the most severe manifestations1, occurs in 1.5-2.7 % of patients and is associated with higher mortality. Such cases usually present as pseudoaneurysms of the abdominal aorta. Open surgery is considered complicated and technically challenging. Aneurysm-related mortality is 10-30 %, and recurrent false aneurysm at an anastomotic site develops in 10-50 %. Graft occlusion or infection, as well as thromboembolic events, are not infrequent1. Endovascular treatment, being minimally invasive, may prove to be the treatment of choice in such patients. Two of the largest endovascular series to date had been reported from China and Turkey on 17 patients (19 pseudoaneurysms)1,2. One patient died within 30 days with multiorgan failure after emergency stent-grafting owing to enlarging periprosthetic hematoma following open surgery for a ruptured aneurysm. The aneurysm in our patient seemed to be fusiform and not saccular in shape, and a true aneurysm rather than a pseudoaneurysm. Whether this was a typical AAA similar to those seen in the general population and not an ABD-related one, it is impossible to tell. Endovascular repair has the drawback that, being performed via a remote site, no aneurysm tissue is available for histopathology. The latter would have been possible during open surgery. In conclusion, an RAAA in patients with ABD is a challenging lesion carrying high mortality and morbidity rates. Endovascular repair may minimize the magnitude of the procedure and improve the results. 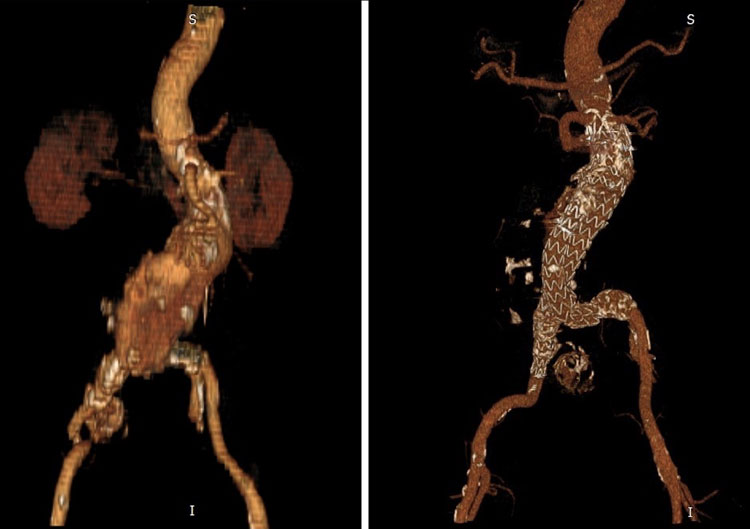 Figure 1: Preoperative (A) and post-stent-grafting (B) 3-D computed tomography angiography of the ruptured abdominal aortic aneurysm. Also, note the covered right internal iliac artery aneurysm which is perfused in a retrograde fashion.