Case description: A 35-year-old female patient presented with a 15-year history of spastic paraparesis with minimal upper-limb involvement. Serum and cerebrospinal fluid samples were positive for HTLV-I. TMS was performed with a figure-of-eight coil (recording, abductor hallucis and first dorsal interosseous muscles). Thr was measured at 1 % steps. SPs were elicited at 5 % increments from 0 to 100 % maximum stimulus intensity (SI), and data were used to construct a stimulus/response (S/R) curve of SI vs SP. The resulting S/R curves were fitted to a Boltzmann equation and statistically compared to control data. Voxel-based DTI analysis was performed with SPM 99. Corticospinal tractography was based on diffusion tensor data. The TMS examination disclosed that MT was significantly increased (54.5 ± 6.36 % vs 41.08 ± 7.85 % in a group of 82 controls, p=0.019). The patient’s SP S/R curve had significantly reduced Max values compared to 13 age-matched controls (160.4 ± 0.91 ms vs 228.36 ± 38.69 ms, p <0.001). Fractional anisotropy was decreased in a cluster of voxels corresponding to the area of the pyramidal tract (0.388 ± 0.015 vs 0.506 ± 0.02 in 20 age-matched controls, p <0.001).

Tropical spastic paraparesis (TSP) or human T-cell lymphotropic virus-I (HTLV-I)-associated myelopathy (HAM) is an uncommon neurological manifestation of infection with the HTLV-I virus1. The latter is endemic in the equatorial areas, the southern part of Japan, and parts of South America but can also affect human immunodeficiency virus (HIV)-infected patients and drug users.

The present case study aims to extend the previous TMS findings in TSP and also to perform DTI analysis and corticospinal tractography.

A 35-year-old Caribbean female patient presented with a 15-year history of spastic paraparesis with minimal upper-limb involvement. On examination, muscle strength was mildly reduced in the upper and particularly the lower limbs (grade 4+/5 and 4–/5 of the MRC muscle scale, respectively). Laboratory investigations revealed positive serum and cerebrospinal fluid samples for HTLV-I.

TMS was performed with a Magstim 200 stimulator (Magstim, Dyfed, Wales) and motor evoked potentials (MEPs) were recorded from the first dorsal interosseous and abductor hallucis muscles. For upper limbs, stimulation was performed with a 70-mm diameter figure-of-eight coil (Magstim type 9925), optimally located and orientated for the excitation of the motor hand area. For lower limbs, a double cone coil (Magstim type 9902), centered over the vertex, was employed.

Silent period (SP) stimulus-response (S/R) curves were constructed and analyzed as previously described7. Briefly, S/R curves of SP duration against stimulus intensity (SI) were constructed using a wide range of SIs (from 5 to 100 % maximum SI in 5 % increments). At each SI, four SPs were obtained, and the average value of SP duration was used to construct the S/R curve. Stimuli of different intensity were applied in random order to avoid serial order effects. As previously shown, the resulting S/R curves are sigmoidal7. Therefore, the Boltzmann equation was used to fit these data by the Levenberg-Marquard non-linear least-mean-square algorithm. The Boltzmann function is given by the equation:

where Y is SP duration, and X is SI, Min and Max are the minimum and maximum values of SP duration, V50 is the SI at which SP duration is halfway between Min and Max, and slope is a measure of the steepness of the curve.

Corticospinal tractography was based on diffusion tensor data obtained with a 1.5 T MRI scanner in 20 healthy age-matched controls. Voxel-based DTI analysis was performed with the statistical parametric mapping 99 (SPM’99). 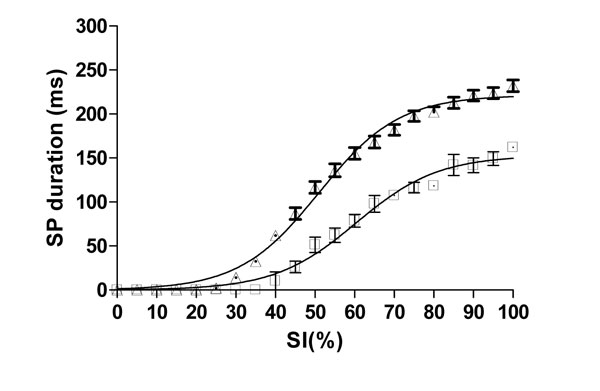 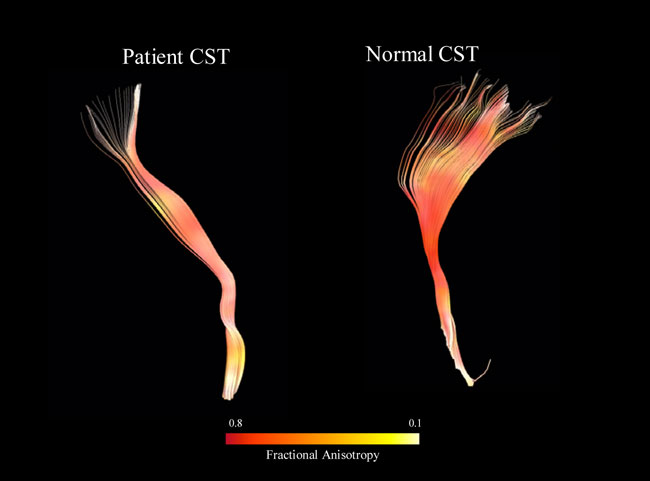 The present study provides novel neurophysiological and imaging evidence for central motor pathways malfunctioning in TSP. The previously reported prolongation of CMCT to lower limb muscles was confirmed. It was additionally shown, however, that corticomotor threshold to upper limb muscles is increased and the inhibitory phenomenon of SP is markedly altered. These latter novel findings imply that brain excitatory and inhibitory mechanisms are involved in TSP. The pathophysiological substrate of these findings is unclear. A neuropathological study indicated that inflammatory brain changes occur in the area between the cerebral cortex and the underlying white matter10. Therefore, they are strategically located so as to interfere with intracortical circuits modulating motor cortex excitability.

DTI revealed degradation of the corticospinal tract, in line with Vilchez et al6. A decrease in FA would be anticipated to occur in cases where axonal degeneration predominates. It should be noted that the essential histopathological changes in TSP include both demyelination (which explains the aforementioned CMCT prolongation) as well as axonal degeneration. For instance, a recent study of amyloid-precursor protein, a marker for impairment of fast axonal transport, in the spinal cords of TSP patients indicated that axonal damage might be a primary phenomenon in the pathogenesis of TSP rather than being secondary to demyelination11. Similar axonal changes may possibly explain the pyramidal tract degeneration revealed by the presented DTI data.

It could be argued that the observed findings are an epiphenomenon, resulting from longstanding retrograde degeneration, rather than a direct reflection of the underlying TSP pathophysiology. Unfortunately, both the rarity of the entity under study and the cross-sectional character of our investigation preclude the possibility of clarifying this point. Accordingly, this issue remains to be addressed in properly designed longitudinal assessments.

The authors report no relevant conflict of interest and no funding support.