Background: Infertility is a major issue of concern for couples at reproductive age. The underlying causes of infertility remain unknown in 15-30 % of the cases. Plasminogen activator inhibitor type 1 (PAI-1), which is a major fibrinolytic factor, has been associated with increased infertility risk. DNA variants at PAI-1, such as -675 4G/5G promoter polymorphism, have been implicated in infertility-related reproductive disorders, possibly due to a molecular mechanism involving implantation failure. This study aims to investigate the association of PAI-1 4G/5G polymorphism to otherwise unexplained female infertility in a sample of women of Greek ethnic origins.

Methods: We enrolled inthis study 222 women from the population of Northern Greece; 115 women with unexplained infertility (group 1) and 107 normal fertile women (group 2). All participants were genotyped for PAI-1 -675 by real-time polymerase chain reaction.

Results: Our results indicate an association with the PAI-1 4G allele in our sample of women with unexplained infertility. The dominant genetic model supports the association, in contrast to the recessive genetic model.

Conclusions: Our results indicate that PAI-1 4G/5G polymorphism is a promising screening factor which could potentially be a target for certain cases of unexplained female infertility. However, they should be interpreted with caution and should be validated in larger studies and diverse populations. In addition, other variants in genes involved in thrombophilia might need to be considered. HIPPOKRATIA 2017, 21(4): 180-185.

The basic infertility evaluation fails to identify the causes of infertility in approximately 15 to 30 % of couples. As a result, infertility of unknown etiology is usually treated empirically, on an individual basis and remains a challenging issue concerning its causes and appropriate management1.

Embryonic implantation failure, defective placentation, and thrombophilia have been proposed as some of the underlying contributing factors in unexplained female infertility. For the prevention of pregnancy loss, attributed to fibrin accumulation in the intervillous space, decidual vessel thrombosis, and problematic placental circulation, the balance between coagulation and fibrinolysis is crucial. The imbalance towards hypercoagulation has been associated with pregnancy complications, such as placental abruption, recurrent pregnancy loss, intrauterine growth retardation, intrauterine fetal loss, and preeclampsia2,3.

Plasminogen activator inhibitor-1 (PAI-1) is an important fibrinolytic factor, which is implicated in thrombotic complications4. PAI-1-675 (4G/5G) insertion-deletion polymorphism in the promoter region of SERPINE1 (PAI-1) gene, is one of the modulator variants of PAI-1 expression. The 4G allele is associated with upregulation of PAI-1 transcription and overexpression5, resulting in higher PAI-1 plasma levels and possibly inhibition of fibrinolysis4. At the same time, it could trigger or reinforce the trophoblast invasion process6,7.

Association studies between PAI-1 gene variants and pregnancy complications are limited and controversial. Moreover, their association with unexplained female infertility remains largely unexplored. The present study aimed to evaluate the contribution of PAI-1 4G/5G polymorphism to unexplained female infertility in a sample of Greek women from the population of Northern Greece.

This retrospective case-control study was conducted from October 2011 until October 2017. All participants were Caucasian and of Greek origin, who lived in Northern Greece and were enrolled in the study from January 2012 until January 2016. They consisted of consecutive infertile patients attending the Hematology outpatient clinic, of the fourth department of Internal Medicine in co-operation with the third department of Obstetrics and Gynecology of the Aristotle University of Thessaloniki, at Hippokration General Hospital of Thessaloniki. A total of 222 women from the population of Northern Greece were enrolled. The study was approved by the Bioethics Committee of Medical School of the Aristotle University of Thessaloniki and written informed consent was obtained by all participants of this study. Women were divided into two groups: the first group consisted of 115 women with unexplained infertility, and the second group, which was the control group, consisted of 107 normal fertile women (with normal conceptions and pregnancies, and no history of miscarriages or pregnancy complications) (Table 1).

The diagnosis of unexplained infertility was established after detailed personal medical history was recorded and the following examinations had been performed, in order to rule out known infertility factors:

i) Ultrasound, hysteroscopy or hysterosalpingogram for anatomic abnormalities in the fallopian tubes or the uterus, as well as polycystic ovary syndrome (PCOS) or endometriosis.

If any of these infertility factors was identified, cases were excluded from this study (Figure 1). 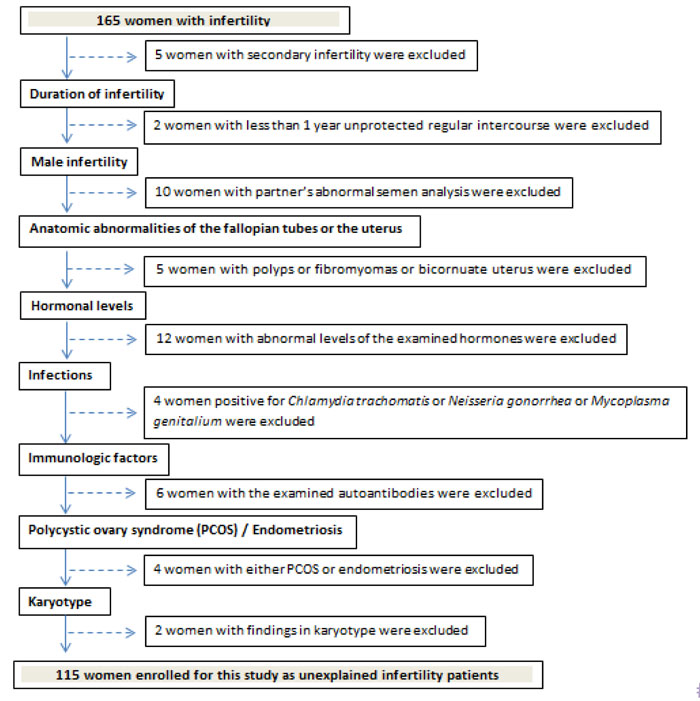 Figure 1: Flowchart explaining the process of excluding cases for the enrollment of women with unexplained infertility.

During the participants’ visit in the clinic, written informed consent was obtained, and a sample of whole peripheral blood was donated for this study which was collected in ethylenediaminetetraacetic acid (EDTA) tubes. DNA was extracted using the QIAamp® DNA Blood Mini Kit (QIAGEN®,Hilden, Germany) and the PAI-1 4G/5G variant was determined by Real-Time polymerase chain reaction (PCR), using the commercially available kit, LightMix® Kit human PAI-1 4G/5G (TIB MOLBIOL GmbH, Berlin, Germany) according to the manufacturer’s instructions and specifications. Following PAI-1 gene PCR amplification with specific primers, specific hybridization probes allowed PCR fragment analysis. Thus, the 5G/5G, 4G/5G, and 4G/4G genotypes were determined by the identification of the different melting points (Tm) of the 4G and 5G alleles in the melting curve.

The SPSS Statistics for Windows (SPSS Inc, Chicago, Illinois, USA) version 17.0 was used for statistical analysis. The Chi-square test was used to examine the Hardy–Weinberg equilibrium (HWE) for PAI-1-675 (4G/5G) genotype distributions in the control group. Deviation from HWE was assessed for a p-value of less than 0.05. The Pearson chi-square test was used to determine the significance of the differences between patients and controls. The indication of statistical significance was set at a p-value of 0.05 or less.

Testing for HWE was considered essential in order to confirm the quality of data. The control group was in HWE for the PAI-1-675 polymorphism (p =0.135).

Our results suggest that the quality of our data, after testing for HWE, is sufficient to exclude the case of genotyping mistakes or publication bias. Statistical analyses indicate an association between the PAI-1-675 genotype and unexplained female infertility. In fact, with our null hypothesis (H0) of no association and p-value of 0.022, the likelihood of falsely rejecting H0 is limited to a 2.2 % chance. Similarly, under the autosomal dominant genetic model, i.e., if we suppose that all that matters is the presence and not the dosage of the 4G allele, we still found an association between the PAI-1-675 genotype and unexplained infertility in women. However, under the autosomal recessive genetic model, there is no indication of this association. Thus, our results do not support the idea that unexplained infertility in women is associated only with homozygosity for the 4G allele (4G/4G genotype), but rather with the presence of the 4G allele in general (both homozygous and heterozygous).

The PAI-1 4G/5G polymorphism has been linked to elevated PAI-1 levels8. In view of the association of this polymorphism with otherwise unexplained female infertility, we postulate that PAI-1 overexpression may be responsible for this unexplained infertility; however, this remains to be explored. Besides, there are also other factors triggering PAI-1 elevation, including hypoxia, fibroblast growth factor (FGF), epidermal growth factor (EGF), vascular endothelial growth factor (VEGF), and interleukin 1 (IL-1)9.

PAI-1 plasma levels have been strongly associated with multiple diseases, especially cardiovascular, such as (recurrent) myocardial infarction (MI), as well as atherosclerosis10. Moreover, it seems to play a significant role in cancer, insulin resistance, and diabetes, fibrosis and even in asthma11-14.Additionally, several studies have identified a correlation between PAI-1 and various reproductive disorders that could lead to infertility problems15.

Recurrent pregnancy loss (RPL)16, preeclampsia17, insulin resistance syndrome and especially polycystic ovary syndrome (PCOS)18 have all been associated with elevated plasma levels of PAI-1. Increased PAI-1 expression has been detected even at a more localized level, e.g., at the placenta of intrauterine growth restriction (IUGR) patients19 or endometriotic stromal cells20.

The underlying mechanism of most of these multiple actions of PAI-1 is based on its contradictory effect on cell invasion, since it can either promote or inhibit cell invasion, like another Dr Jekyll and Mr Hyde. Thus, on the one hand, PAI-1, which is expressed among others in the placenta and localized in cytotrophoblasts, intermediate and syncytiotrophoblasts21 reduces extravillous cytotrophoblast invasion to the maternal side in early pregnancy22, mainly due to inhibition of extracellular matrix degradation and the resulting fibrin accumulation23-24. The above-described mechanism, where elevated PAI-1 levels prevent trophoblast invasion, is likely to apply to preeclampsia25 and IUGR19.

Furthermore, PAI-1 can also be responsible for defective placental vascular remodeling of maternal spiral arteries and consequently for pregnancy complications, including preeclampsia, RPL, and IUGR26-28.

On the other hand, PAI-1 promotes tumor cell migration and invasion29. Indeed, it was shown that in a dose-dependent manner, PAI-1 low dose provokes tumor angiogenesis, whereas high dose suppresses it30. Similarly to cancer, it promotes endometriotic cell invasion, contributing to endometriosis20.

The PAI-1 4G/5G polymorphism is one of the factors contributing to PAI-1 elevation, although it is not the only one8. The PAI-1 4G/5G contribution to RPL remains controversial. Some studies suggest that it is related to unexplained RPL and defective implantation, particularly in Caucasians according to a meta-analysis31,32 or Asians and Africans, according to another meta-analysis33, while others suggest that multiple thrombophilic mutations are responsible, rather than a single polymorphism34.Similarly, some studies have demonstrated an association of the 5G/5G genotype with early-onset severe preeclampsia35, while other meta-analyses did not support such an association36. Infertility due to endometriosis has also been linked to 4G/5G polymorphism37, although there are studies with contradictory results. As for IUGR, no correlation to the PAI-1 4G/5G polymorphism has been demonstrated38. Nonetheless, an association seems likely as far as PCOS is concerned, in various populations (Asian, Turkish, and European)39.

Obviously, limitations in a study are inevitable. The present study enrolled a relatively small sample size and, as it is original, its sample size calculation was based on a preliminary pre-study of the first thirty samples. In the future larger studies are needed, comparing primary to secondary infertility, infertility before and after assisted reproduction methods, or groups of different infertility duration. Moreover, other potential infertility factors, that have not been tested cannot be ruled out, for example, smoking or other thrombophilic gene variants. Additionally, as already mentioned, this study has not examined PAI-1 levels.

Our study indicated an association between the PAI-1 4G/5G polymorphism and unexplained female infertility of unknown etiology, as far as the population of Northern Greece is concerned. In particular, this association refers to the presence of the 4G allele and is potentially due to defective implantation. However, our results should be interpreted with caution, since larger studies, on different populations, that will take into account multiple thrombophilic gene interactions, are required. Nonetheless, the PAI-1 4G/5G could be a promising screening test to be utilized in cases of otherwise unexplained female infertility. Further investigations are essential to demonstrate whether PAI-1 levels are indeed elevated in unexplained infertility and if PAI-1-related infertility could be addressed by anti-coagulation treatments.

There are no conflicts of interest.