A tracheal diverticulum is an uncommon benign condition consisting of minor air assortments at the paratracheal area, which is, at most cases, incidentally identified by imaging studies. Although it is usually associated with respiratory pathologies, it rarely necessitates therapy1.

We present the case of a 43-year-old woman complaining of chronic potent pain in her right neck that reflected on the ipsilateral shoulder. According to the patient’s medical history, she had been intubated seven times for cosmetic or non-life-threatening surgeries. As symptoms were considered of psychosomatic origin, the patient was administered antidepressant drug treatment by her physician, without symptom relief. Her initial examination, including electrocardiogram, chest X-ray and laboratory exams, revealed no pathological findings, therefore the patient underwent computed tomography (CT) of her chest, which depicted an air cyst on the posterior right wall of the trachea (Figure 1). The subsequent bronchoscopy under radioscopy revealed a small hole, with contrast agent leakage in the upper third of the trachea. Due to the persistent severe symptomatology, the patient underwent surgical treatment via a transcervical approach to facilitate sufficient surgical access. Following dissection of the surrounding structures, the diverticulum was identified, and the stalk connecting it with the trachea was resected, creating a 3mm in diameter, tracheal wall defect which was primarily sutured. Histopathology revealed a cyst composed primarily of respiratory mucosa with no cartilage or smooth muscle. The patient recovered uneventfully and remains asymptomatic with no recurrence after 3 years in follow-up, proving that her initial symptoms could be attributed to the presence of the diverticulum. 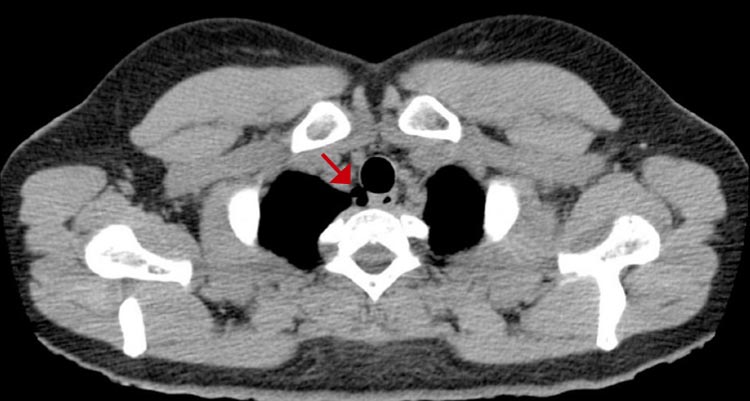 Figure 1: Axial computed tomography scan of the chest showing a tracheal diverticulum at the posterior right wall of the trachea.

The incidence of tracheal diverticula is estimated at 2.38 % of patients undergoing a chest CT for any reason2. They are commonly found in patients suffering from a chronic cough or chronic obstructive pulmonary disease and are believed to be caused by long-standing augmented pressure caused by those entities1. Other infrequent causes such as trauma, surgical complications, tracheomalacia, and Mounier-Kuhn disease (tracheobronchomegaly) have also been reported1,2.

Tracheal diverticula are typically asymptomatic and do not require treatment. The occasional local infections can be treated conservatively with antibiotics, mucolytics, and physiotherapy1. In the reported case, surgery was considered indispensable, due to persistent severe symptomatology. A transcervical approach can be utilized to avoid thoracotomy. Moreover, electrocoagulation or endoscopic laser excision may also be performed1.

At 97.1 % of the cases, tracheal diverticula are located at the right posterolateral region of the trachea2, as in the case presented, because this area is probably the most pliable place at the border of the intra- and extra-thoracic trachea3, making it more prone to injury in occasions such as intubation. Due to the absence of any other obvious pathology, the patient’s diverticulum was assumed to have been caused by the multiple preceded intubations, which is a rather infrequent cause.

Even though the responsible etiology is speculative, it seems to be the most probable one, a fact which highlights the dangers that emanate from