Alveolar soft-part sarcoma (ASPS) is one of the least common soft-tissue sarcomas. It is of particular clinical significance because of the high prevalence of metastases and its microscopic appearance, which may be mistaken for metastatic renal, adrenal, hepatocellular carcinoma, paraganglioma, or alveolar rhabdomyosarcoma1.

It accounts for approximately 0.5%-1% of all soft tissue sarcomas and affects mainly adolescents and young adults2.

The tumour is generally considered to be malignant and originate in soft tissue, most commonly in the deep tissues of the extremities3. Metastasis may be delayed but eventually occurs in virtually all cases and involves lung, bones, and brain in that order of frequency 3. Synchronous metastases are detected in 20% to 25% of cases4.

ASPS show a high incidence of around 30% of brain metastases, being at least3 times higher than that of other soft tissue sarcomas5.

We report a 39-year-old Caucasian woman who appeared with painless progressively enlarging tumour on the upper third of the right shin. The preoperative tissue diagnosis (incisional biopsy) was alveolar soft-part sarcoma. Magnetic resonance imaging of the whole body revealed a 7cm tumour lesion in the posterior compartment of the right calf and bone metastasis in the tibia (Figure 1). Above the knee amputation was performed. The patient recovered uneventfully and arranged for follow-up visits every three months. She is doing well 4 years after the intervention. ASPS are indolent but have a high propensity for metastases. Early diagnosis and complete excision of the small primary tumour are essential in the treatment of alveolar soft-part sarcomas, while adjuvant chemotherapy and /or radiotherapy are disputed. 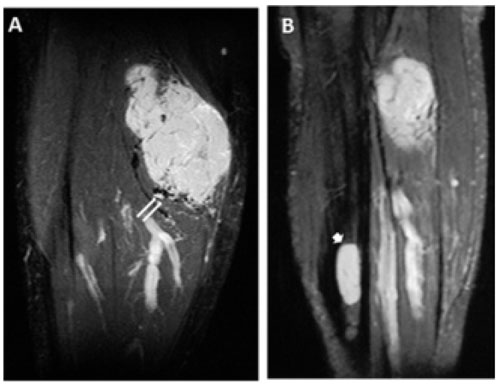 Figure1: Coronal (A) and sagittal oblique (B) T1 weighted images after intravenous gadolinium administration reveal a 7 cm tumour lesion (arrows) in the posterior compartment of the right calf and a bone metastasis in the tibia (arrowhead).

Conflict of interest
None declared.