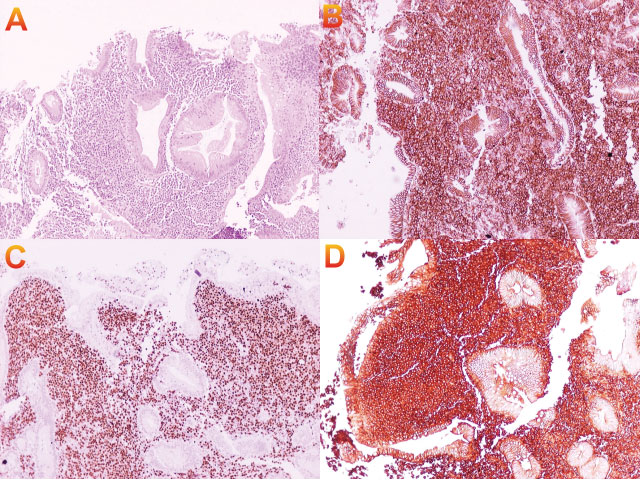 The patient underwent six cycles of bi-weekly chemotherapy with cyclophosphamide (750 mg/m2), doxorubicin (50 mg/m2), vincristine (1.4 mg/m2) and prednisolone (50 mg/m2/day) (CHOP). However, his symptoms deteriorated with massive mesenteric lymphadenopathy. He denied further treatment and died hospitalized in his country, after 4 months.

Middle East studies indicate decline in its incidence over the last 3 decades. This is explained by improved socioeconomic and hygienic conditions (vaccinations programs, decrease in malnutrition and intestinal infections), but also because of increased antibiotics use and decreased incidence of Campylobacter jejuni,which has been linked with IPSID, through chronic antigenic stimulation.Antimicrobial therapy with tetracycline, ampicillin or metronidazole is effective in early-stage IPSID, which may completely remit, showing the importance of early diagnosis. However, many patients experience transformation to diffuse large B-cell lymphoma (DLBCL), or distant metastases and fatal outcomes are frequent2. We conclude that IPSID transformed to DLBCL in our patient, because of his clinical course. Treatment with anthracycline regimens results in remission and longer survival2.