Introduction: Despite the major advances made in the diagnosis and management of ectopic pregnancies in the last two decades, an accurate diagnosis can sometimes still be quite challenging, since it relies on the combination of ultrasound findings and serial serum beta-human chorionic gonadotrophin (β-hCG) measurements.
Case presentation: This paper describes the case of a 36-year-old woman of Caucasian origin who was admitted to the emergency department of our clinic with clinical symptoms of hemorrhagic shock in combination with two negative pregnancy tests done by her at home and a negative urine test which was performed on her admission to the hospital. Quantitative measurement of β-hCG in the serum of the patient was 13 mIU/mL. On admission, right tubal pregnancy was diagnosed on ultrasound and she underwent an emergency laparotomy due to signs of hemodynamic shock.
Conclusion: It is sometimes a considerable challenge to identify a patient with an ectopic pregnancy at risk of rupture. This case of ectopic pregnancy which was followed by a negative pregnancy test illustrates the magnitude of the difficulties involved in the diagnosis of ectopic pregnancy. It also demonstrates the need to maintain a high clinical index of suspicion and to undertake careful clinical examination of the patient on the basis of the clinician’s diagnostic research.

A ruptured tubal ectopic pregnancy is likely to lead to hemorrhagic shock or even death if there is no timely diagnosis and treatment. In Britain it remains the fourth leading cause of maternal death1. Over the last decade, the incidence of ectopic pregnancies has been approximately 1/100 pregnancies, but this figure rises to as high as 2-3/100 in assisted conceptions techniques where the mortality rate is estimated at 0.4/1,000 births2. The diagnosis of ectopic pregnancy, which can be quite challenging, relies on the combination of ultrasound findings and serial serum beta-human chorionic gonadotrophin (β-hCG) measurements3. A pregnancy test carried out by measuring the β-hCG in serum, which is a glycoprotein hormone produced by the syncytiotrophoblast cells precisely at the time of implantation (6th day after fertilization), is a way of demonstrating the presence of a pregnancy while usually a negative value of this hormone in serum rules out any pregnancy4. Thanks to recent advances, transvaginal ultrasound (TVS) is providing ever increasing sensitivity in diagnosing a pregnancy sited outside the uterus, thus ectopic pregnancies are usually diagnosed at an early stage before rupturing. The etiology still remains under debate, although a certain number of risk factors have been identified5. It is of considerable interest that in about 5%-31% of women admitted to hospital with early pregnancy problems, while pregnancy cannot be located during the first assessment, ultimately only 6-9% of them prove to be ectopic pregnancies6. This is a case report of a patient who was admitted to the emergency department of our clinic with clinical signs and symptoms of hemorrhagic shock in combination with two negative pregnancy tests done by her at home and a negative urine test which was performed on her admission to the hospital. We also present a brief review of the literature on this rare event.

A 36-year-old nulliparous woman of Caucasian origin, with a past history of polycystic ovaries and a corpus luteum rupture in 2009 which was treated conservatively, was admitted via ambulance to the emergency department of our clinic with symptoms of acute lower abdominal pain and two episodes of blackouts within the last 12 hours at home, with a few minutes of unconsciousness in the second one. The patient reported 6 weeks of amenorrhea and spotting per vagina for 5 days and two negative urine pregnancy tests at home the day before.

On her admission to our hospital, there were clinical signs of hemodynamic compromise, with marked tenderness on superficial and deep abdominal palpation, rebound tenderness, sweating, pallor, palpitation (110/min) and low blood pressure (80/60 mm Hg). There was also intense reflex sensitivity in the right shoulder (Kerk-sign positive), the patient’s temperature was 36.2 C0, while ECG revealed only tachycardia with sinus rhythm. On pelvic examination, there was marked cervical excitation. Blood results were the following: Hematocrit: 27.1% with Hemoglobin: 9.3 g/dl, white blood cells: 21.3 m/ml with Neutrophils: 73.1%, and platelets: 260,000/mL. The urine pregnancy test which was conducted in our hospital was negative (UCG-Rapid ambotest devise, Croma test Linear Chemicals). The measurement of β-hCG in the serum of the patient was 13 IU/l, a result that was lower than the threshold that could be detected by the specific kit (Instant-View®) pregnancy test that is used in our hospital, with a limit of 40 IU/L β-hCG. At this point, an urgent transvaginal ultrasound was performed, which demonstrated no evidence of intrauterine pregnancy, a large amount of free liquid and blood clots in the pouch of Douglas, a corpus luteum ovarian cyst on the left ovary and a cystic mass suspicious for tubal pregnancy with hyper-echoic decidual reaction on the right adnexa (Figures 1 and 2). 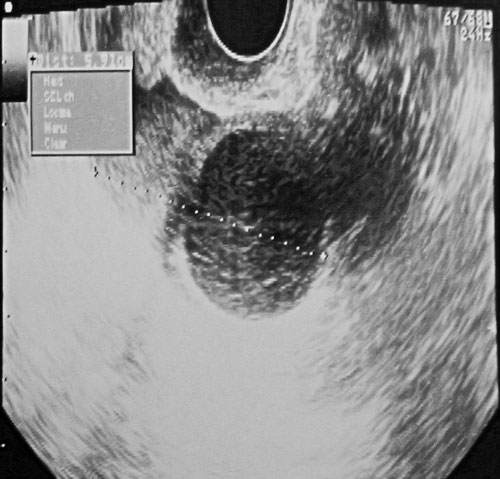 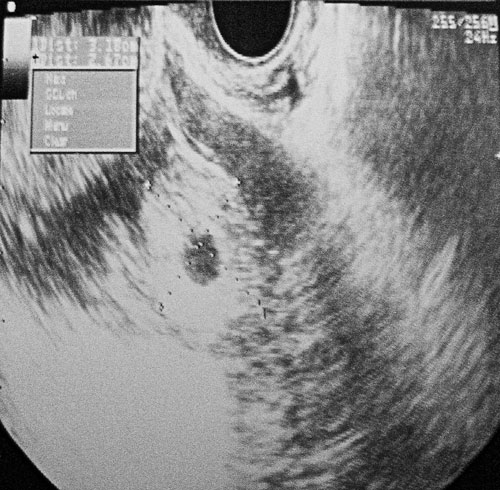 At that point, we suspected the possibility of tubal pregnancy and, due to the patient’s hemodynamic instability she was transferred urgently to the operating room where an exploratory Pfannenstiel incision was conducted. On laparotomy, a ruptured right tubal pregnancy, a left corpus luteum cyst, with a normal fallopian tube and a significant hemoperitoneum (of approximately 500-700 ml of blood) were confirmed. A right salpingectomy and peritoneal lavage were performed and the tissue section was sent for histological examination. During and post operation she was transfused with four units of packed red cells in total.

The postoperative course was uneventful and she was discharged after 3 days. The histological examination confirmed a case of right tubal pregnancy.

The diagnosis of ectopic pregnancy is based on the measurement of the beta subgroup of human chorionic gonadotrophin in blood (via immunological methods) as well as on ultrasonography and physical examination findings. This means that during pregnancy, the hormone concentration is increased to high rates, doubling every 48 hours, peaking at 60-90 days after conception and subsequently dropping and stabilizing at the lowest level. This increase is demonstrated in the 71% of pregnant women with normal pregnancies and the 15% of women with ectopic pregnancies3,7. According to the literature, a negative pregnancy test via urine or low β-hCG in serum of pregnant women is 3.1% and 2.6% respectively in ectopic pregnancies8-10. In addition, more than 1% of ectopic pregnancies are associated with undetectable levels of β-hCG. One hypothesized mechanism to account for the low β-hCG values is its reduction or cessation of production of the degenerate trophoblastic tissueand another likely explanation is the existence of low-mass chorionic villi which produce this hormone and their increased clearance from the circulation. The first author to report a case of burst ectopic pregnancy together with a negative pregnancy test was Lonky in 198711. Other cases mentioned in the literature are depicted in Table 19,10,12-15. One report showed that 88% of ectopic pregnancies with levels of β-hCG less than 200 IU/L have an automatic resolution, though when levels are more than 2000 IU/L β-hCG this percentage drops to 25% of cases12. Quantitative measurement of β-hCG in the serum of the patient in our case was 13 IU/L, a value that was less than the threshold that could be detected by the pregnancy test kit that is used in our hospital, with a limit of 40 IU/L β-hCG. The accuracy of TVS findings in ectopic pregnancies is variable. In 20-25% of cases a live ectopic pregnancy is found, while the bagel sign with a hyper-echoic tubal ring with or without hemorrhage, or presence of intrauterine pseudo-sac along with complex inhomogeneous mass next to the ovary and free fluid in the pouch of Douglas, are the most frequent findings16. According to the metanalysis of Brown et al17, any non cystic adnexal mass on TVS has a positive predictive value of 96.3%, negative predictive value of 94.8%, specificity of 98.9% and sensitivity of 84.4%. An interesting finding which in our case rendered the diagnosis by ultrasound even more difficult was the site of the ovarian corpus luteum (left ovary), which was on the opposite side of the right tubal ectopic, while in more than 80% of ectopic pregnancies it is situated on the same adnexa18.