Background: Severe liver dysfunction caused by acetylsalicylic acid (ASA) is quite rare. The purpose is to describe a patient with severe liver dysfunction due to excessive intake of ASA in a suicide attempt, who was successfully treated with living donor liver transplantation (LDLT).
Description of Case: We report a 20-year-old woman who took 66 g of ASA in a suicide attempt. She was admitted to our hospital and received forced alkaline diuresis. However, her liver and renal functions worsened after admission. On the 6th day after intake of ASA, she was transferred to the intensive care unit, and plasma exchange (PE) and continuous hemodiafiltration were performed. Since her liver function did not recover despite repeated PE, she was transferred to another hospital for LDLT on the 8th day. She underwent LDLT with a portion of the liver donated from her mother on the 11th day. After the operation, her renal dysfunction continued. Her renal parameters gradually improved, and she was discharged on the 44th post-operative day without renal dysfunction.
Conclusion: PE is effective in removing ASA from blood. Liver transplantation is the only effective treatment if liver function does not recover in spite of repeated PE.

A 20-year-old woman took 66 g of ASA orally in a suicide attempt. The patient reported that she had not taken other drugs. She was transported to the emergency department of our hospital by ambulance, complaining of nausea 3 hours after ingesting ASA. At arrival, she was able to walk unassisted. On initial physical examination, she had a Glasgow coma scale score of 15, blood pressure of 198/93 mmHg, heart rate of 140 beats/min, and body temperature of 37.2℃. Her body weight was 55 kg; therefore, she had taken 1200 mg/kg of ASA. Arterial blood gas analysis measured on arrival showed respiratory alkalosis and metabolic acidosis (pH: 7.495, PCO2: 20.6 mmHg, PO2: 107.5 mmHg, HCO3–: 15.5 mmol/l); however, her initial blood tests except for arterial blood gas analysis showed no significant abnormalities. Triage®, which is a simple kit to detect drugs in urine (Sysmex Corp., Kobe, Japan), revealed no reaction. Her ASA level, which was measured at an outside laboratory, was 1180 μg/ml. We immediately performed gastrolavage, and then started forced alkaline diuresis.

Figure 1 shows the changes in her laboratory data after admission and treatments that were administered. As shown in Figure 1, her renal and liver functions gradually worsened. On the 5th day after intake of ASA, she had a fever of about 40℃ and her aspartate aminotransferase (AST) and alanine aminotransferase (ALT) levels were both elevated at almost 1,000 IU/L; however, she was still alert. Her AST and ALT levels increased to more than 2,500 IU/L and the international normalized ratio of prothrombin time (PT-INR) increased to more than 5 on the 6th day. Her blood gas analysis measured on the 6th day showed worsening metabolic acidosis (pH: 7.359, HCO3–: 12.0 mmol/l). Computed tomography (CT) performed on the 6th day revealed that her liver resembled severe fatty liver (Figure 2). She was transferred to the intensive care unit, and plasma exchange (PE) and continuous hemodiafiltration (CHDF) were introduced on the 6th day. We explained to the patient’s family that it may be necessary to perform liver transplantation on the same day. Her mother was the only one who could be a donor candidate in the patient’s family, and her mother immediately decided to be a living liver donor if liver transplantation was necessary. Although her blood gas analysis measured on the 7th day showed improved metabolic acidosis (pH: 7.448, HCO3–: 21.3 mmol/l), her PT and total bilirubin did not improve and her liver function did not recover despite repeated PE (Figure 1). A transplant surgeon at another hospital came to our hospital on the 7th day, and determined that it was necessary to perform LDLT on that day. The patient was transferred to another university hospital in another prefecture for LDLT on the 8th day. Her consciousness fell due to hepatic encephalopathy on the 10th day; therefore, she underwent LDLT with a portion of the liver donated from her mother on the 11th day. The operation was successfully performed; however, she continued to have renal dysfunction. Her renal parameters gradually improved and she was discharged on the 55th day without renal dysfunction. She was ambulatory at discharge. The postoperative course of her mother was uneventful, and she was discharged from the hospital on the 11th postoperative day. 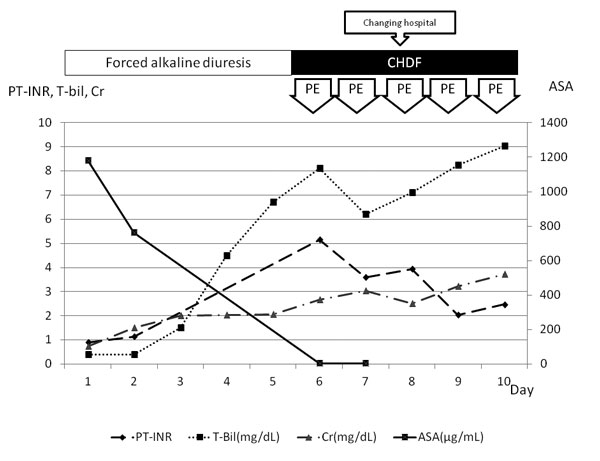 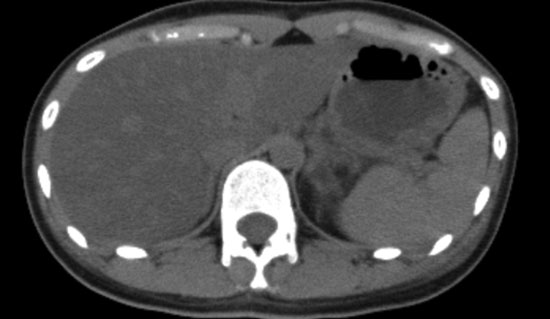 Figure 2. Computed tomography scan of the liver on the 6th day. There is a diffuse low-density area in her liver, and no evidence of a space-occupying lesion. These findings indi- cate severe fatty liver.

Pathological examination of the patient’s removed liver revealed remarkable defluxion of hepatocytes and invasion of neutrophils and mononuclear cells around the portal vein. The residual hepatocytes had become swollen and had small vesicles in the cytoplasm. These findings are consistent with severe drug-induced liver failure.

Non-steroidal anti-inflammatory drugs (NSAIDs) including ASA are widely used as analgesics and antipyretics for the management of traumas, infectional diseases, and rheumatological disorders1. A dose of ASA of greater than 150 mg/kg is toxic, and ASA intake of more than 500 mg/kg causes severe toxicosis2. Our patient took 1200 mg/kg of ASA, and she developed serious toxicosis. Pathological findings of her removed liver showed severe drug-induced liver failure.

Although concomitant overdose of ASA and acetaminophen was reported as a risk factor for the development of hepatic encephalopathy and death or need for liver transplantation3, there are few papers that mentioned liver dysfunction as a toxic effect of ASA alone. ASA reduces fatty acid oxidation in mitochondria, and reduces the activity of long-chain 3-hydroxyacyl-CoA dehydrogenase (LCHAD)4. If LCHAD activity decreases, disorder of catabolism of fatty acids occurs. A typical symptom of LCHAD deficiency is hypoketotic hypoglycemia; therefore, organs with much oxygen consumption (heart, brain, liver and muscle) become disordered5,6. This might be one of the mechanisms of liver dysfunction in this case. A multinational study with the aim of investigating the risk of acute liver failure leading to registration for transplantation in patients exposed to non-steroidal anti-inflammatory drugs is being planned to study the hepatic toxicity of NSAIDs7.

PE was performed before LDLT in our patient. As shown in Figure 1, the level of ASA in the blood decreased after the first PE although her liver function did not recover, and the reduced ASA level in the blood may have contributed to the success of liver transplantation.

In conclusion, severe liver dysfunction caused by toxicosis of ASA is rare. PE is effective in removing ASA from blood. If liver function does not recover in spite of repeated PE, liver transplantation is the only effective treatment.