A detailed clinical examination is considered to be the cornerstone of the diagnostic procedure. We report a case of an initial misdiagnosed exertional dyspnea and the essential contribution of echocardiography in the delayed myxoma diagnosis.

A 45-year-old woman presented with exertional dyspnea and low-grade fever of one-week duration. She had a two-year medical history of chronic obstructive pulmonary disease (COPD) under inhaled bronchodilators and corticosteroids. She reported a gradual worsening of dyspnea along with constitutional symptoms including low grade fever and weight loss during the preceding six months. During that period of time, her signs and symptoms were attributed to the COPD past medical history and treated accordingly.

Due to symptoms persistence, she was referred to our hospital. Cardiac examination revealed loud S1 heart sound and a late diastolic murmur audible at the cardiac apex. The remainder of physical examination was unremarkable. Chest X-ray did not revealed any pathological signs and electrocardiogram revealed bifid P wave. Finally, laboratory tests revealed a mild chronic iron deficiency anemia (Hct: 36%, Hgb: 11.4 g/dL) and an increased erythrocyte sedimentation rate of 64 mm/hour.

In order to exclude the cardiac origin of the symptoms, we conducted a transthoracic echocardiogram, which revealed a large mass attached by a thin stalk to the fossa of the left atrial septum prolapsing during diastole into the left ventricular inflow tract (Figure 1). Severe functional mitral valve stenosis (mean gradient 11.7 mmHg) and elevated pulmonary artery systolic pressure (50 mmHg) were also detected. A coronary angiography revealed normal coronary vessels, before she was referred to surgery and a 5.0 x 4.5 x 2.0cm gelatinous mass was successfully resected. Histology confirmed it to be cardiac myxoma with diffuse hemorrhagic foci. 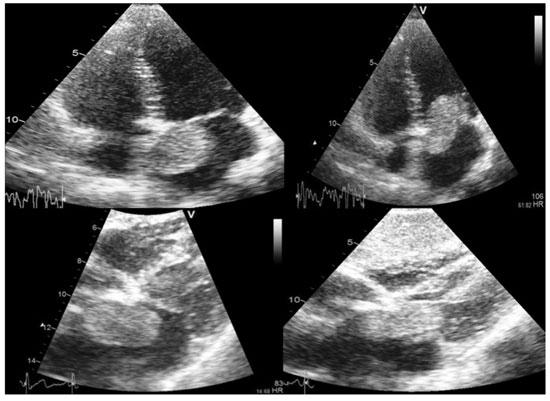 Figure 1: Transthoracic echocardiogram reveals a large mass in the left atrium attached to the interatrial septum which was prolapsing across the mitral annulus into the left ventricular inflow tract during diastole. Upper panel: 4-chamber view, Lower panel: sub-costal view.

Cardiac myxomas and especially those of the left atrial cavity, are the most common primary heart tumors. Although they are typically benign, local recurrence due to inadequate resection or malignant change has been reported. Because of nonspecific symptoms, early diagnosis may be a challenge. Unless the physician has a high index of suspicion, the clinical diagnosis of cardiac myxoma is missed due to the variety of presenting symptoms (fever, weight loss, night sweats, syncope, arrhythmias, peripheral embolization or rash)1.

In the reported case, the suspicion of a cardiac lesion was late risen, after a quite long period of COPD exaggeration misdiagnosis and treatment. Unexceptionably, thorough clinical examination constitutes the initial important step of myxoma diagnosis, while confirmation is easily obtained with echocardiography. Although transesophageal echocardiography is more sensitive, 2-dimensional study is usual adequate for diagnosis, like in the presented case.