Background and aim: Green tea and lotus hold several synergistic antioxidant compounds. This investigation aimed to assess the efficacy of green tea and green tea plus lotus vs. placebo multiple emulsions in healthy adults for controlling casual sebum secretions.
Participants and Methods: After signing informed consents, twenty-two participants were registered in a sin-gle-blinded, placebo-controlled, split-face comparative study. Group 1 participants applied a multiple emulsion formulation with green tea extract while group 2 applied a multiple emulsion with green tea plus lotus extract in a 60 days treatment course. A non-invasive photometric device (Sebumeter®) has been used for the measurement of casual sebum secretions on both sides of the face.
Results: Steady and statistically significant reductions in sebum secretions were noted for mono (green tea) and combined treatments (green tea plus lotus) compared to placebo treatment. However, irrespective of the concentration of extracts in active formulations, green tea plus lotus combined treatment produced statistically more sound results (two-tailed p value = 0.0002) than green tea alone (two-tailed p value = 0.0060) in a 60-days treatment course.
Conclusions: Results suggest that synergistic compounds in green tea and lotus could be a promising choice for cutaneous disorders where elevated sebum levels are involved in the pathophysiology of these disorders.

Sebaceous glands are responsible for the production of sebum, a product that is mixture of lipids composed mainly of triglycerides (TG), wax esters (WE), squalene, free fatty acids (FFA) and smaller amounts of cholesterol, cholesterol esters (ChoE) and diglycerides1-4. The intensity of the sebaceous glands activity is directly proportional to their size. The activity of the glands depends on hormones. Secretion of sebum is regulated by various hormones and excessive sebum secretion is caused by these hormones5. Along with increased sebum secretion rate, qualitative and quantitative modifications of sebum are likely to occur. Decreased concentration of linoleic acid has been observed in skin surface lipids of acne patients. In particular, its level has been found significantly reduced in wax esters making it reasonable to assume that linoleic acid is directly involved in the sebaceous lipid synthesis3. Elevated sebum excretion is involved in the pathophysiology of acne, as body parts rich in sebaceous glands are the areas where acne lesions are manifested5.

A hallmark of sebum in acne patients is the presence of lipoperoxides, mainly due to the peroxidation of squalene and a decrease in the level of the major sebum antioxidants6. Certain natural products contain components that are inhibitors of 5-alpha-reductase and green tea is one of them. These potential 5-alpha-reductase inhibitors may be useful for the prevention or treatment of androgen-dependent disorders7. Furthermore, the epigallocatechin-3-gallate (EGCG) polyphenol from green tea has also been suggested to be helpful in acne due anti-inflammatory and antioxidant activities8. Various phyto-constituents in lotus include alkaloids, steroids, triterpenoids, flavonoids, glycosides and polyphenols type this historic plant, a potent antioxidant, anti-inflammatory, immunomodulatory agent9. Lotus seeds are rich in protein, amino acids, unsaturated fatty acids and minerals such as zinc10,11, while flavonoids have been identified in the stamens of lotus. Leaves are rich source of alkaloids and rhizomes contain plenty of zinc9.

The present study aimed to describe the facial sebum control of green tea and lotus incorporated in novel multiple emulsions. Multifunctional benefits from the active constituents of green tea and lotus were also subjected to a comparative study, in order to better understand any synergistic / additive effects these molecules might have on facial sebum secretions. All these effects were measured with a non-invasive, photometric device (Sebumeter®).

In this single-blinded, monocentric study, twenty two non-smoker healthy male volunteers with ages between 22 and 28 years were enrolled. In green tea group mean age was 24.18 ± 0.98 and in green tea plus lotus group mean age was 24.18 ± 1.83. All participants were informed about the possible adverse reactions of the study and included in the study after signing informed consents. All subjects completed the study. Participants did not use any skin care products on the test sites throughout the study. Participants were instructed not to use any skin care products like moisturizers on the test sites 15 days before study and throughout the study period of 8 weeks. Moreover they were asked not to change their dietary habits during the study to nullify the effects of such changes on study results.

The products subjected to evaluation were two multiple emulsions with green tea (GT) and green tea plus lotus (GT-L). A placebo multiple emulsion was used to compare the effects of active formulations. The composition of the formulations has been shown in (Table 1). The formulations were subjected to single application closed patch test under semi-occlusion, before their application to the cheeks of healthy adults. Once found safe by a human skin irritation study, formulations were promoted in further studies. Results of the human skin irritation study are reported in our previous article12.

The study was a monocentric, single-blinded, placebo-controlled type study in which participants were divided into two groups each having 11 subjects. On one half of the face (cheek) subjects applied placebo and on the other they applied active treatment, either GT or GT-L. The participants were appropriately instructed about the application of the formulations at bed time over a 60 day trial. All the participants called for baseline sebumetric measurements and on day 15, 30, 45 and day 60. Before any measurements, all volunteers had to rest under constant environmental conditions of 22 ± 2°C and 50 ± 5% relative humidity, for at least 30 min. All the assessments were recorded by a single evaluator to nullify person-to-person differences particularly for objective assessments.

Sebum excretion levels on both cheeks were determined with a photometric device (MPA 5 system with built in Sebumeter® SM 815, Courage+ Khazaka, Germany). The measuring head of the cartridge exposes a 64 mm2 measuring section of an opaque plastic tape which is firmly pressed onto the cheeks for 30 s with a slight pressure to collect the sebum. The resulting increase in transparency of the tape was measured and the displayed values correspond to the sebum amount on the face in μg sebum/cm2.

This study was conducted during the months of December to February, and was approved by the Board of Advanced Studies and Research from the Islamia University of Bahawalpur (No. 942/Acad). The study was conducted in accordance with the ethics principles of the Declaration of Helsinki and was consistent with Good Clinical Practice Guidelines. All participants were included in this study after written informed consents.

They were informed about the possible adverse reactions, procedures, protocols and objectives of this study. They reserved the rights to quit the study without informing about the reasons.

The percentage changes in sebum secretion after every 15 days for each subject were calculated by using the following formula;

Regarding the composition of two the treatments, the GT-L formulation contained 2.5 % green tea and 2.5 % lotus extract, while the GT formulation contained 5 % green tea alone. It is evident from the statistical interpretation that GT-L with several active substances, reduced sebum levels more profoundly than mono active GT formulation. In this particular study, the concentration of the active ingredients did not matter in reducing the facial sebum levels; the results rather suggest synergistic / additive effects of the two extracts. Moreover, active ingredients in the formulations produced sustained effects in reducing the sebum secretions throughout 60 days, which may indicate the role of multiple emulsions usually used as vehicle for cosmetic agents where sustained effects are desired. Finally, the products showed an excellent safety profile without any sign of skin irritation and the products were well tolerated (data not shown but the safety profile of the formulations has been reported in our previous study)12. Figures 1 and 2 demonstrate the percentile changes in sebum production for both groups in a 60 day treatment course. 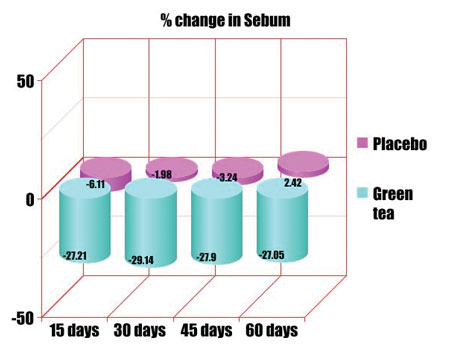 Figure 1: Changes (%) in sebum secretions after application of green tea over the 60 day treatment course, compared to placebo treatment. 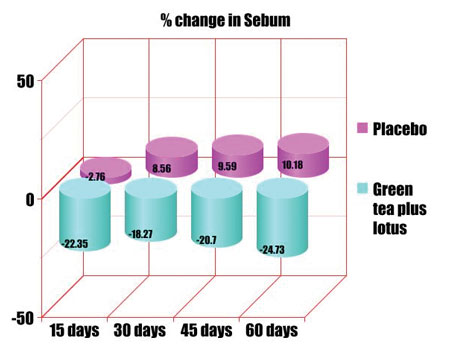 Figure 2: Changes (%) in sebum secretions after application of green tea plus lotus over the 60 day treatment course, compared to placebo treatment.

Considerable scientific evidence suggests that under situations of oxidative stress, reactive oxygen species (ROS) such as superoxide, hydroxyl and peroxyl radicals are generated, and the balance between anti-oxidation and oxidation is believed to be a critical concept for maintaining a healthy biological system. Consequently, the search for antioxidant principles from plants has been accelerated, and many plants with potential antioxidant activity have been identified13.

Green tea contains four major types of polyphenols:(-) -epicatechin (EC), (-)-epicatechin gallate (ECG), (-)-epigallocatechin (EGC), and (-)-epigallocatechin-3-gallate (EGCG). All of these polyphenols act as potent antioxidants and can scavenge ROS, such as lipid-free radicals, superoxide radicals, hydroxyl radicals, hydrogen peroxide, and singlet oxygen. EGCG, which is the most abundant polyphenol present in green tea, has been considered to be the main compound responsible for these effects, constituting approximately 40% of the total polyphenolic mixture14.

All parts of N. nucifera have been used for various medicinal purposes in oriental medicine13. Pharmacologically active constituents have been isolated from the seed, leaf, flower, and rhizome. The chemical constituents include alkaloids, steroids, triterpenoids, flavonoids, glycosides, and polyphenols, as well as a variety of minerals such as zinc9.

Sebum is produced by holocrine sebaceous glands which acts as lubricant and imparts waterproofing properties to the stratum corneum. Any excessive sebum secretion is associated with pore enlargement leading to undesirable pathophysiological condition called acne15.

Several factors have been postulated for the excessive sebum secretions and a few strategies to overcome the excessive sebum production are (a) treatment with polyunsaturated fatty acids, (b) use of zinc which pecifically inhibits 5α-R1 and (c) use of inhibitors like epicatechin-3-gallate and epigallocatechin-3-gallate (EGCG), which are major constituents of green tea15,16.

It has been postulated that polyunsaturated fatty acids, incorporation of zinc compounds and inhibitors of 5α-R1, all may contribute to the reduction of sebum secretions that are associated with pathophysiological conditions like acne. Some of the researchers have reported previously several studies in which they have topically applied various plant extracts having 5α-reductase inhibitory activity17,18.In our previous study, we have also reported a 5α-reductase inhibitory activity of the 3 % topical emulsion15.

Green tea and lotus contain potent antioxidant compounds. Furthermore, lotus contains zinc compounds and polyunsaturated fatty acids that have a direct influence on 5α-reductase inhibition. Previously Nelumbo nucifera extracts has been reported to contain several actives such as polyphenolics, flavonoids, tannic acid, plenty of zinc9,19 and linoleic acid as principal unsaturated fatty acid up to 50.4%20. Moreover the epigallocatechin-3-gallate (EGCG) polyphenol from green tea has also been suggested to be helpful in acne due to its well documented anti-inflammatory and antioxidant activity8, as well as topical application of both linoleic acid and EGCG in animal model has been shown to inhibit the sebum production and this activity thought due to selective inhibition of 5α-R21.

This study aimed at exploring whether green tea alone is superior in its 5 α – reductase inhibitory activity or several active compounds from lotus may add some synergistic / additive effects. We found that lotus may add synergistic / additive effects in combination with green tea. Results after statistical interpretation revealed that green tea and lotus in combination may produce better results than green tea alone. In our opinion, the synergistic effect of lotus was due to its constituents, which have a potentiation effect, together with the green tea, on 5α-R inhibitory activity.

Furthermore, the synergistic effect of the lotus appears due to its constituents which have a potentiation effect, together with the green tea, on 5α-R inhibitory activity. Thus, the anti-sebum secretion effects of the green tea and lotus in healthy adults suggests their promising potential for cutaneous disorders wherein elevated sebum excretion is involved in the pathophysiology.

Authors are highly thankful to Higher Education Commission of Pakistan for their support in accomplishing this study.

Authors declare no competitive interests for this research.