Background: High level of alpha-fetoprotein is usually associated with testis cancer or hepatocellular carcinoma a primary tumor of the liver.
Case: We report the case of a 72-year-old male patient with chronic renal failure who presented with a high alpha-fetoprotein (AFP) level and a retroperitoneal mass, which was subsequently diagnosed to be an extrahepatic hepatocellular carcinoma.
Conclusion: A retroperitoneal mass with elevated AFP level and no detected liver lesions is not always caused by a testicular cancer.

Alpha-fetoprotein (AFP) is the most abundant plasma protein in the fetus. It is secreted mainly by the fetal liver, yolk sac and gastrointestinal tract. Plasma levels of AFP decline rapidly after birth to reach levels below 5 ng/mL in normal healthy adults1.Measurements of AFP are used to screenpregnant women for fetal developmental disorders. Its physiological functions have not yet been determined. Its half-life is 4-5 days2. AFP was initially thought to be specifically elevated in hepatocellular carcinoma (HCC) and embryonal cell carcinoma3,4.However, AFP has also been found in patients with stomach, lung, pancreas, colon and gall bladder adenocarcinomas, and has been detected in patients with benign conditions such as hepatitis and liver cirrhosis5,6.Italian and American guidelines consider an AFP concentration ≥200 ng/mLdiagnostic for HCC7.

In the present report, we describe a patient with a retroperitoneal mass and an extrahepatic HCC who presented withelevated AFP levels.

A 72-year-old male patient presented to the nephrology outpatient clinic of Recep Tayyip Erdogan University Hospital with a complaint with intermittent abdominal pain in the epigastric region and tightness in the chest that was not associated with eating habits. The pain had been progressive over the last two months, but was not accompanied by nausea, vomiting or diarrhea. Over that period, his bodyweight had dropped approximately 4 kg. His medical history included 10 years of hemodialysis due to polycystic renal disease, but he had negative history for smoking and alcohol use.

Ultrasonography of the abdomen revealed a normal liver and spleen. However, two hypoechoic nodules were observed to the left from the midline in the paraaortic region extending posterior to the pancreas and stomach; the larger nodule measured 64 x 60 mm and the other nodule had a diameter of 22 mm, suggestive of metastatic lymphadenopathy. Endoscopic evaluation was recommended due to the increased gastric wall thickness. 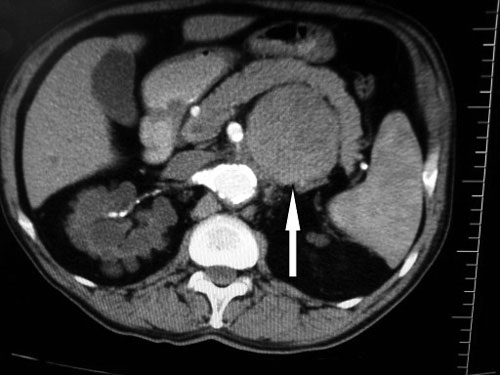 Since neither ultrasonography nor computerized tomography showed any evidence of a lesion in the liver, testicular cancer was suspected. Scrotal ultrasonography, however, revealed a normal testis, and the patient’s BHCG concentration was (5.19 mIU/ml). Pathological examination of a Tru-Cut biopsy of the retroperitoneal mass was consistent with HCC (Figures 2, 3). The neoplastic cells were immunoreactive for α-fetoprotein (AFP), Hep Par 1 (Figures 2, 3, 4), polyclonal carcinoembryonic antigen (pCEA) and negative for CK7, CK20. Consultations were requested from general surgeon and medical oncologist who evaluated the patient and even though he was a high-risk patient due to the renal and cardiac failure, they decided to operate him. However the patient refused to give consent to surgery or to any other intervention. He is currently continuing his hemodialysis program. 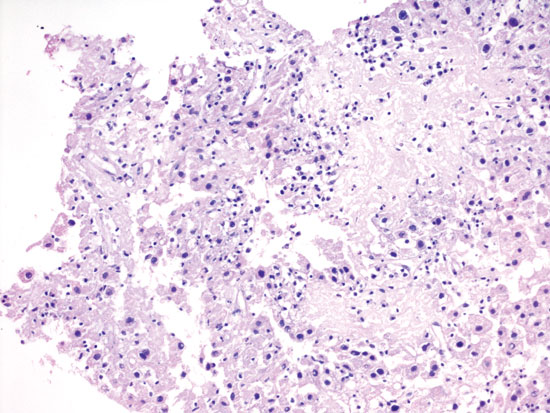 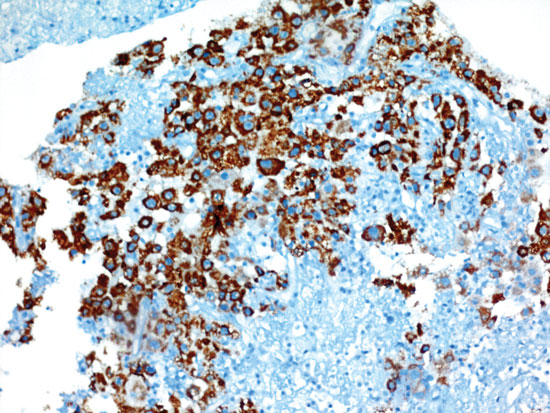 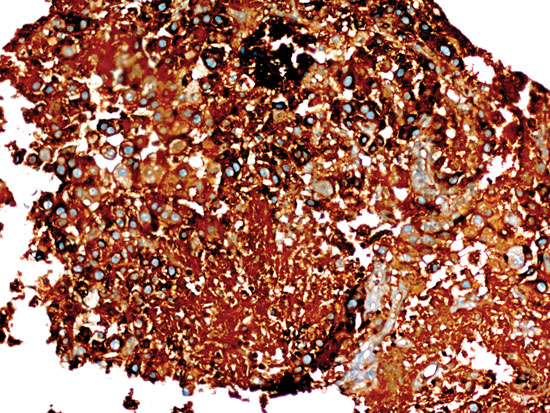 Figure 4. The neoplastic cells were immunoreactive for he- patocyte paraffin-1 (Hep Par 1, x 200).

A rare case of an extrahepatic HCC, present as a retroperitoneal mass, in a patient with a high serum AFP concentration is described. This tumor may have originated from ectopic liver tissue. Ectopic or heterotopic liver, defined as normal liver tissue found outside its normal location, is a rare developmental anomaly with an incidence below 0.5%8. Although most ectopic liver tissue has been found in the gallbladder, it has also been found in the diaphragm, hepatic ligaments, omentum, stomach, retroperitoneum and thorax9-11. Histopathological examination of ectopic liver tissue has revealed a liver lobule structure. However, HCC risk is higher in ectopic than in normal liver tissue12,13. A study of 93 patients with HCC found that 7 did not have primary liver lesions, with most lacking known HCC risk factors, includingchronic hepatitis and cirrhosis14.

Most patients with ectopic HCC reported to date have been from Asia12. Although the causes underlying the higher rates of HCC in ectopic than in normal liver tissue have not been determined, it may be associated with impairment of vascularization or chronic cholestasis. The life expectancy of patients with HCC is poor; removal of HCC surgically offers the best chance for possible cure. The resection of an ectopic HCC can be curative due to the carcinogenetic potential of these tumors and is usually limited to the ectopic liver itself12. Laparoscopic resection of HCC is a safe and suitable alternative to open surgery if the indications are appropriate.In a previous publication, complete cure has been reported after a resection of ectopic HCC in pancreas8.Whereas in another case report; following the resection of ectopic HCC that had local invasion to gastric mucosa, the patient died 15 month later due to multiple metastasis12. In the present report, the patient had left adrenal metastasis. Thus, if he had given consent to a surgery, it would not be curative.To our knowledge, systemic chemotherapy for HCC has been of limited value in clinical practice, because its toxicity often outweighs the benefits. In the current case, systemic chemotherapy was recommended to the patient, however he refused any intervention.

A retroperitoneal mass with high AFP level without a primary lesion in the liver may not represent a testicular cancer.