Background: Autologous vein or prosthetic materials are used as patch or tube graft for portal or caval vein reconstruction after trauma or tumor resection. Preparation of autologous veins requires extra incisions and is time consuming that is crucial especially in trauma patients. This condition adversely affects postoperative morbidity and mortality, particularly in trauma cases. Prosthetic materials may not be available in some centers, and their use is associated with an increased risk of infection.
Description of case: A 28-year-old hemodynamically unstable man presented to the emergency room with complete transection of main portal vein, right hepatic artery and common bile duct with tissue defect on hepatoduodenal ligament due to blunt thoracoabdominal trauma. Reconstructing of the portal vein was performed using an autologous peritoneal tube graft.
Conclusion: Autologous peritoneal graft is a very good option in the treatment of major vascular injuries which can not be repaired with primary suturing. It is also easy to prepare and use, safe, without a need of additional incision, as an alternative to autologous veins and prosthetic materials especially under emergency conditions. Hippokratia 2015; 19 (3): 260-262.

Autologous veins and prosthetic materials are used as patch or tube graft for portal vein or caval vein reconstruction after trauma or tumor resection. While using prosthetic material increases the risk of infection, preparation of autologous veins requires extra incisions and is time-consuming. These conditions adversely affect the postoperative morbidity and mortality. In such cases, without the need for additional time and experience, a peritoneal graft can be used in vascular reconstruction with relative ease of preparation. We performed reconstruction of a 6 cm in length tubular portal vein graft using peritoneum in an emergency condition.

A 28-year-old man presented to the emergency room with abdominal distension and hemodynamic instability due to blunt thoracoabdominal trauma. Focused assessment with sonography for trauma (FAST) examination revealed free peritoneal fluid. A chest tube was placed for left sided pneumothorax shown by chest X-ray. Hemopericardium was excluded by negative pericardial FAST. The patient underwent emergency laparotomy where two liters of blood was evacuated from the peritoneal cavity. Further exploration revealed complete transection of the main portal vein, right hepatic artey, and common bile duct with tissue defect on the hepatoduodenal ligament. Bleeding from the portal vein was noted after evacuation of blood clots from the hepatoduodenal ligament. Distal and proximal ends of hepatic artery and portal vein were clamped followed by exposure of the portal vein and hepatic artery. After control of bleeding proximal and distal ends of the portal vein were prepared for reconstruction. Due to the long duration of preparing autologous grafts and unavailability of a synthetic graft at the time, we decided quickly to provide the continuity of portal vein with peritoneum. For portal vein reconstruction, the required graft length was 6 cm. A 6 x 4 cm segment of peritoneum was excised from the right subcostal region. The peritoneum was rendered luminal by wrapping on a 2 ml syringe. A 6 cm in length peritoneal graft was created after the adjacent opposite edges were sutured using 6-0 continuous polypropylene (Prolene, Ethicon, Johnson and Johnson, New Brunswick, NJ, USA) (Figure 1). Peritoneal graft reconstruction was undertaken using with 6-0 continuous polypropylene and continuity of the portal vein was achieved. After removal of the clamps, restored blood flow to the liver and decreased intestinal congestion was observed (Figure 2). Blood loss was estimated at two liters. Due to hemodynamic instability, the hepatic artery was ligated, and it was decided early in the course of the operation to perform “damage control” surgery. The anastomosis of transected bile duct could not be performed due to the critical condition of the patient. We could only put an external biliary drainage catheter into his bile duct through the skin. The anastomosis was planned to be performed in next operation when the patient might be better. Jackson-Pratt drain was also placed in the subhepatic space and operation was terminated. The patient expired 12 hours after the operation.No identifiable cause of death was found at postmortem examination. The liver and bowel demonstrated no evidence of ischemia and congestion. Also, no evidence of portal venous thrombus or bleeding was revealed. We obtained permission from the patient’s family for the images of the manuscript. 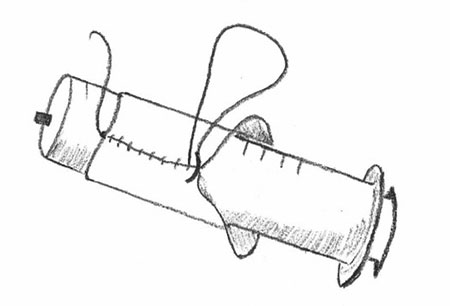 Figure 1: Drawing demonstrating the peritoneal graft preparation that was rendered luminal by wrapping on a syringe and suturing the adjacent opposite edges using 6-0 continuous polypropylene. 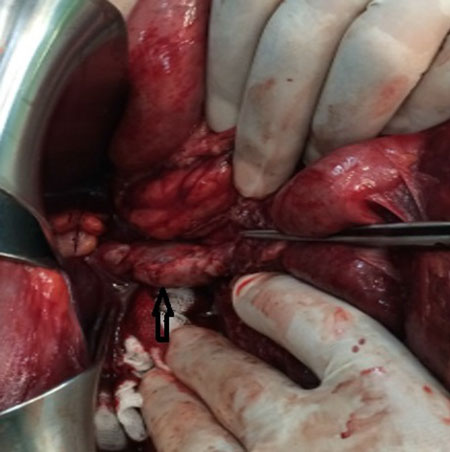 Figure 2: Intraoperative image of the portal reconstruction with the peritoneal graft pointed with arrow.

Major vascular injuries that may occur during malignant tumor resection or trauma have limited options for repair. In such cases, surgeon’s experience and availability of appropriate equipment provide an advantage. However, this may not be sufficient in the case of an emergency such as severe trauma. Rapid decision-making and practical solutions may be life-saving for the patients and provide great relief to the surgeon.

Autologous, allogeneic or synthetic grafts may be used in patients with major vascular injuries. In our case, considering patient’s hemodynamic status and the period after trauma, we decided to avoid spending valuable time preparing autologous graft. Surgeon’s experience in preparation of those grafts is of great importance to the success of the operation and affects the postoperative morbidity. Preparation of the peritoneal graft took about ten minutes. Also, no prosthetic or cryopreserved vascular graft was available in our center at the time of the surgery, in June 2014. Considering those factors in our case, it was decided to use peritoneal graft.

In this case, peritoneal tissue was quickly harvested from the subcostal region and reconstructed after forming luminal shape. Thus, portal blood flow to the liver was restored. We considered also the possibility of the saphenous vein graft. The saphenous vein harvesting and reconstruction can be performed easily and requires a short operative time, especially if the diameter is sufficient. But, especially in younger population, portal veins are larger in diameter than saphenous veins and the flow is high. Therefore, it requires to create an autogenous vascular composite graft, and this may probably take longer time. On the other hand, cryopreserved vascular grafts are at risk of thrombosis, aneurysmal dilatation, and late rejection.

Polytetrafluoroethylene (PTFE-Gore-Tex) is used as a vascular graft in patients with major vascular resections and injuries1. Previous studies have shown over 80% cumulative patency of those grafts especially in slow flow and low venous pressure settings1. However, compared with autologous materials, having relatively rigid structure may result in difficulties in implementation, especially in inexperienced hands. Otherwise, especially in patients with bleeding diathesis, bleeding may be in the form of leakage from the suture line. However, use of synthetic grafts should be avoided especially in penetrating injuries with a high risk of infection2.

Endothelial damage, fibrotic valves, atherosclerotic wall structure and development of varicose veins affect patency of the autologous graft. Compliance of the peritoneum is close to that of vascular structures and has positive features, such as the possibility of migration to the native cells3.

Carrel first described using peritoneum as vascular patch in 19014. Some experimental studies have shown that the peritoneum used in vascular bed gets lined by endothelial cells in one-two weeks5. Although experimentally, the peritoneum has thrombogenicity that could be overcome with the use of anticoagulants or antithrombotic drugs to maintain patency of the repaired portal vein, previous studies showed that, compared with synthetic grafts, the autologous grafts have less risk of infection and thrombosis6,7. However, in some studies, peritoneal vascular patches were shown to have a lower risk of infection and thrombosis8,9. In another case, thrombosis has not been observed for more than five years in a peritoneal patch that was used as a graft for left hepatic vein stenosis following donor hepatectomy10.

Yoshioka et al5 reported in his experimental animal study that no thrombosis developed in peritoneal grafts despite the lack of antithrombotic therapy and it was considered to be a good and safe alternative for reconstruction after partial resection of the portal vein in clinical surgery.

Dokmak et al11 first used tubular peritoneal grafts for reconstruction of the portal vein after vascular resection in hepatopancreatobiliary surgery for malignant tumors. They used autologous parietal peritoneum as lateral (n =28) or tubular (n =2) substitute for reconstruction of the mesentericoportal vein (n =24), vena cava (n =3), or hepatic vein (n =3) in thirty patients. No peritoneum related complication was observed. After a mean follow-up of 14 (7-33) months, all venous reconstructions were patent except for one tubular graft that obstructed with thrombosis.

To the best of our knowledge of English literature, this is the first case that tubular peritoneal graft was used for reconstruction of the portal vein in a patient with trauma.

An autologous peritoneal graft is a very good alternative in the treatment of major vascular injuries which can not be repaired with primary suturing and is easy to prepare and use, safe, without a need of additional incision, especially in emergency conditions. Also, it carries low risk of infection and thrombosis, is cheap and useful in centers where a vascular graft bank or synthetic grafts are not available.