Background: We report the case of a 35-year-old man with stroke related to infective endocarditis (IE) caused by Kocuria kristinae.
Case description: The patient with chronic hepatitis C virus infection and a former intravenous drug user developed a stroke suddenly, after three months duration of fever and malaise. Duplex ultrasonography of the carotid arteries (zero level diastolic flow, diastolic reversed flow) focused attention to cardiac valve pathology and endocarditis (definite confirmation was made by transesophageal echocardiography). Kocuria kristinae was grown from the blood culture and antibiotic therapy administered, according to the antibiogram, did not cure the infection and the patient underwent an aortic valve replacement with a mechanical prosthesis and debridement of the mitral valve. One year after the surgery, the patient had no subjective problems and neurological findings were normal.
Conclusion: To our knowledge, this is the first case of IE caused by Kocuria kristinae, which was diagnosed after the development of stroke, where IE was suspected based on Duplex ultrasonography of the carotid arteries. This is the second case of infection by this bacterium which could not be cured by antibiotics only and had to be submitted to surgical intervention. Hippokratia 2016, 20(3): 231-234

Infective endocarditis (IE) is usually caused by specific microorganisms, such as Staphylococcus aureus, Streptococci, and Enterococci1 and can rarely be caused by the bacteria of the normal skin and oral flora, such as Kocuria kristinae2. Kocuria kristinae is a gram positive bacteria and an unusual pathogen, most commonly isolated from the blood cultures of infants, immunocompromised patients, and patients with catheter-related bacteremia3-7. There are only five patients reported in the literature with IE caused by Kocuria kristinae (Table 1)8-12. Patients with IE are at high risk of developing neurological complications such as cardioembolic stroke13. According to the latest recommendations for prevention, diagnosis, and treatment of IE of the European Society of Cardiology, IE is diagnosed based on transthoracic and transesophageal echocardiography14. IE can be suspected based on Doppler ultrasonography of the carotid arteries, which demonstrate zero level of diastolic flow, retrograde diastolic flow, and high blood flow velocity that indicates possible changes in the valves that may be present in patients with endocarditis15. There are no guidelines for antibiotic treatment in IE related to Kocuria kristinae infection. Analysis of susceptibility to antibiotics of the bacteria of Micrococcaceae family, such as Kocuria kristinae, showed that are sensitive to Doxycycline, Ceftriaxone, Ampicillin, Cefuroxime, Amikacin, Trimethoprim/Sulfamethoxazole, Ciprofloxacin, Penicillin, and Erythromycin16.If there is no clinical improvement, or there is persistent fever for more than eight days despite antimicrobial therapy or involvement of microorganisms which are not usually cured by antimicrobial therapy, cardiac surgery is the only remaining therapeutic option for IE14.

To our knowledge, this is the first case of stroke related to IE caused by Kocuria kristinae. Also, the suspicion of IE was based on Doppler ultrasonography of the carotid arteries, which is very rare.

A 35-year-old man was admitted to the neurology department complaining of the weakness of the left side of the body, which developed suddenly during the night prior to his admission. He complained of malaise, intermittent fever (up to 39º C) and shivering, especially at nights, for the preceding three months. Antibiotic therapy was administered three times during that period (azithromycin 500 mg, once daily for three days), but was not effective. He was a former injection drug user, with chronic hepatitis C virus (HCV) infection for the previous three years. He reported no previous heart problems and no history of heart diseases in his family. Neurological examination showed central facial palsy, expressive dysphasia, and moderate left hemiparesis. 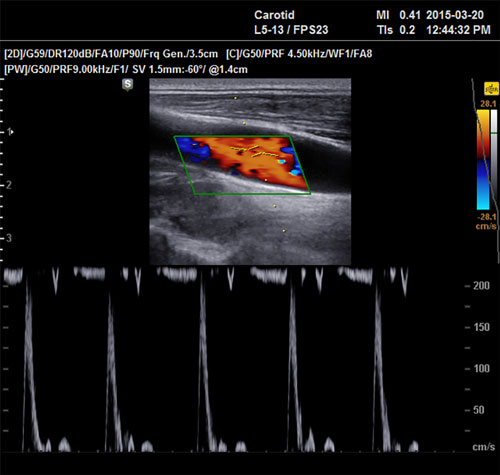 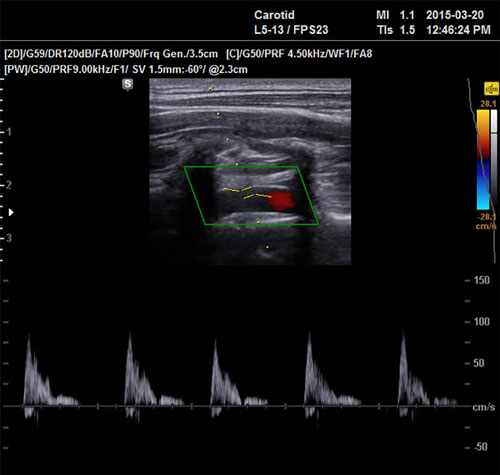 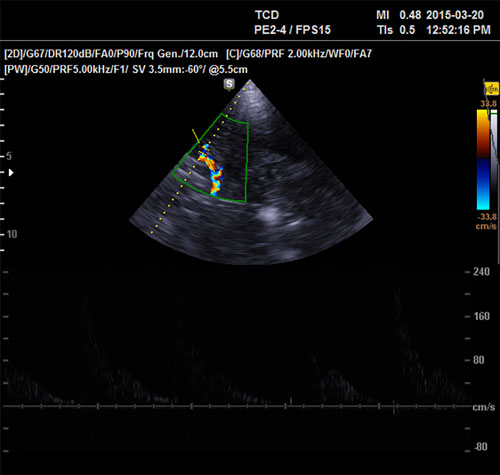 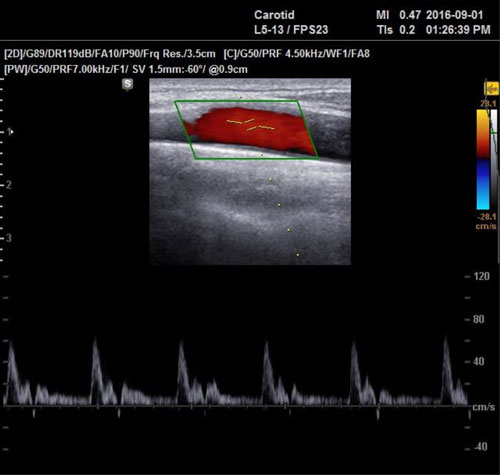 The patient was treated with the standard stroke therapy and symptomatic therapy (Aspirin, low molecular weight heparin, therapy for hypochromic anemia, physical therapy). The diagnosis of IE was suspected based on the findings of Duplex ultrasonography of the carotid arteries, and the fever that lasted for three months. Transthoracic ultrasound demonstrated aortic valve vegetation and aortic regurgitation 2-3+. Blood cultures grew positive for Kocuria kristinae. The microorganism isolated from the blood culture of our patient was sensitive to Vancomycin, Gentamicin, Ceftriaxone, Ampicillin + Sulbactam, Tazocin, Cefotaxime, Ceftazidime, Cefepime, Teicoplanin, Erythromycin, Ciprofloxacin, Trimethoprim + Sulfamethoxazole, Imipenem, Meropenem, Ertapenem. The bacterium was found not to be resistant to any antibiotic.

Transesophageal echocardiography was performed, and two echogenic vegetations (31 x 8 mm and 8 x 3 mm) were detected in the left ventricular tract, with very high embolic potential. The aortic valve was fibrous, with echogenic vegetations and aortic regurgitation that was 3+, which confirmed the diagnosis of bacterial IE.

Antibiotic therapy, which had been administered until that moment, did not cure the infection and the patient still suffered from fever and malaise. A vegetation sized 12 x 12 mm was detected on transthoracic ultrasound, at the aortic valve. The patient was classified as NYHA II class (New York Heart Association Functional Classification), and surgical treatment of IE was performed. An aortic valve replacement with a mechanical prosthesis and debridement of the mitral valve were performed. In the postoperative period, the antibiotic therapy administered was according to the protocol for the treatment of IE (Vancomycin 1 g IV every 12h for a total of 4 weeks with the addition of Gentamicin 0.08 g every 8h IV for a total of 2 weeks). The specific microorganism was not isolated in cultures of the perioperative microbiological material sent (valve swab, blood culture). There were no post-operative complications, transthoracic ultrasound demonstrated the mechanical prosthesis in the aortic position, and no pathological aortic regurgitation was seen. The patient was started on oral anticoagulant therapy.

One year after the surgery, the patient had no subjective problems, and neurological findings were normal. Duplex ultrasonography of the carotid arteries was normal (Figure 4). Transthoracic ultrasound demonstrated the mechanical prosthesis in the aortic position with optimal functions (aortic jet velocity: 2.15 m/s, aortic valve pressure gradient: 18.44 mm Hg).

Kocuria kristinae is a Gram-positive bacterium, and it is a part of the normal human skin and oral cavity microbial flora. Human infection is rarely caused by this microorganism2. The literature describes cases of infection caused by Kocuria kristinae in premature infants and immunocompromised patients with malignant diseases3-7. Our patient, besides chronic hepatitis C virus infection, had no other risk factors that would make him susceptible to this bacterium. In the literature there are five published cases of IE caused by Kocuria kristinae. Two patients were reported to have diabetes mellitus9,11, one of them with amputated and infected diabetic foot9. The third patient had short bowel syndrome and central venous catheter8, the fourth had chronic obstructive pulmonary disease12, and the fifth patient was an immunocompetent adult patient10.

The standard procedure for establishing a definitive diagnosis of IE is the transesophageal echocardiography. Transthoracic echocardiography can set the suspicion of IE when the images are of good quality. As far as our knowledge is concerned, IE is rarely suspected based on Duplex ultrasonographyof the carotid arteries, as was the case with our patient17. The findings on duplex ultrasonography of carotid arteries which may indicate valvular heart disease are a bisferious pulse, zero level diastolic ﬂow, and diastolic reversed ﬂow. Diastolic reversed ﬂow has been reported in the carotid arteries of patients with aortic regurgitation. Zero level diastolic ﬂow is always abnormal and has been reported in aortic stenosis.Duplex ultrasonography of carotids in our patient showed two signs (diastolic reversed flow, zero level diastolic flow) that have aroused the suspicion of valve disorder and when combined with the anamnesis regarding the three-month period of fever and malaise, it established the diagnostics of IE. This diagnosis was confirmed with transesophageal echocardiography14,17.

There are no guidelines for the treatment of IE caused by Kocuria kristinae, and analysis of the cases, for which data are available, showed that therapeutic approaches of all the authors were different (Table 1)8-12. There is a case reporting Kocuria kristinae to be resistant to a large number of antibiotics (Penicillin, Oxacillin, Tetracycline, Cotrimoxazole, Erythromycin, Ciprofloxacin, and Gentamicin)18. However, in our case, the bacterium was sensitive to all tested antibiotics. Most cases of infection with these bacteria showed that isolates of Kocuria kristinae were sensitive to Vancomycin. Resistance to a large number of antibiotics could be a great problem in the future in the treatment of such infections18. The majority of reported patients were treated using Vancomycin as monotherapy, or in combination with one or two other antibiotics5,7. The antibiotic therapy in all these cases led to cure, except for patients with fatal outcome due to poor general condition6,9, and one patient from Turkey who needed surgical replacement of both aortic and mitral valves11. Our patient was not cured despite the appropriate administered antibiotic therapy. The causes for this outcome are most likely the long duration of disease, the severe stroke, and chronic hepatitis C virus infection. After the aortic valve replacement and mitral valve revision, the patient recovered. The one year after surgical treatment the patient was without health problems.

To our knowledge, this is the first case of IE caused by Kocuria kristinae, which was diagnosed after the development of stroke, where IE was suspected based on Duplex ultrasonography of the carotid arteries. This is the second case of infection by this bacterium which could not be cured with antibiotics only and had to be submitted to surgical intervention. This case expands the clinical knowledge of this unusual pathogen and adds information to current diagnostic and therapeutic options.

The authors have no conflict of interest and no funding support.