A 67-year-old Caucasian female with 18-year-history of serum-positive Rheumatoid Arthritis (RA) presented with a disease flare. During her disease course, she had been treated with the entire spectrum of Disease Modifying Anti-Rheumatic Drugs (DMARDs). During the last two years, she had been treated with Etanercept 50 mg weekly, subcutaneous Methotrexate 15 mg weekly and 7.5 mg prednisone daily.

The flare started after demanding leather manual work. Joint stiffness was extremely prolonged and most inflicted joints were her shoulders that appeared swollen, tender, with a limited range of movements. All small joints had been affected and profoundly damaged by the long-standing RA, causing tenderness to almost all her joints. Adjustment of therapy was advised. Blood tests revealed anemia (Hematocrit: 34%), erythrocyte sedimentation rate: 32 mmHg, C-reactive protein: 0.6 mg/l, Rheumatoid factor: 239 IU/ml, and normal biochemical findings. The overall Disease Activity Score was 6.98.

Her shoulders were severely damaged by the prolonged course of RA and as a crucial point of her complaints, largely contributed to her visual analog scalescore(90 mm). We evaluated her shoulder joint by ultrasound (US). A Logiq P6 Pro US (General Electric, USA) equipped with a 10-13 MHz linear transducer was used according to the European League Against Rheumatism (EULAR) US guidelines. Left side US examination showed a posterior Humeral head (Hh) subluxation (Figure 1a)and tenosynovitis of the long head of the biceps tendon (LHB) (Figure 1b) while on the right side revealed the Hill-Sachs lesion (Figure 1c) which appeared as a shallow defect of the bony Hh, like a compression fracture located on its posterolateral aspect. The right LHB appeared dislocated from its groove (Figure 1d) and placed on top of the eroded lesser tuberosity. Synovial hypertrophy, inflammation or joint fluid were not detected. 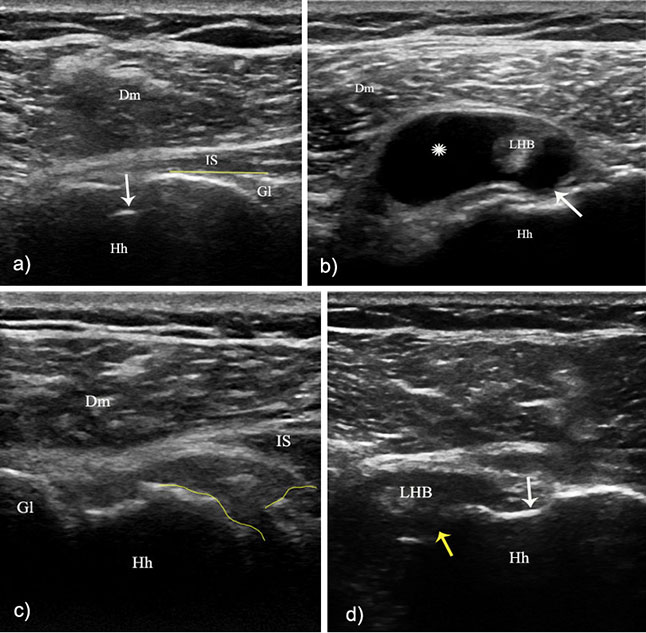 The late-stage RA is complicated by structural joint damages, so none of the DMARDs or change of their course could modify this patient’s current condition. The local cure procedures (local cortisone injections or physical therapy) were recommended along with a surgical repairing in advance.

US is a valuable and powerful modality for differentiation of joint’s damage origin in the clinical practice. It is more sensitive and accurate method compared to the clinical examination1, in synovitis and erosions’ evaluation2, and in the inflammation assessment3 using the Doppler mode. US is considered to be the gold standard for the overall RA evaluation.