In Figure 1 one can see the three main anatomical variations of the sphenopalatine region that might interfere with the classical cauterization procedure through the middle meatal approach. We found both the classical and “two-point” techniques to be similarly safe, wheras hospitalization time was lower in the two-point cauterization group. The failure rate of the procedure was similar to that previously reported3. 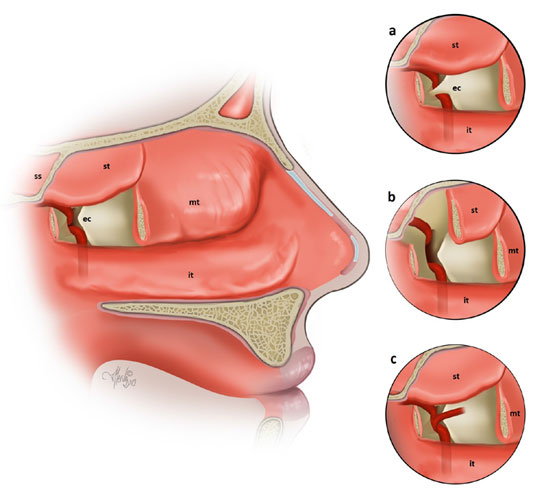 Even though the small sample size of the study and non-uniformity of groups are limitations for definitive conclusions, the two-point cauterization technique of the sphenopalatine artery is effective in controlling the bleeding and safe without any major complications. It is suitable for intractable recurrent epistaxis cases in order not to overlook any major branches of SPA where the bleeding vessel can not be visualized. Thus, the two-point technique seems to be more suitable when the site of bleeding is not known preoperatively, if the patient’s history is unreliable, if nasal packing was placed elsewhere, or when there is no evidence of bleeding at the time of surgery. Further prospective studies are warranted to determine the exact efficacy of the technique.