Prostate cancer (PCa) is the most common cancer in males in the Western World, while its incidence has a strong geographic variation within different countries and regions1. It usually grows slowly with no signs for many years. So, early control of the disease progression contributes significantly to survival rates and patient’s quality of life.

It has been reported that androgens and the functional status of androgen-receptor play an important role as mediators of prostate adenocarcinoma’s progression2. Metastatic PCa usually responds to androgen ablation therapy. However, it often turns into a hormone-resistant disease, with limited overall survival despite the adjuvant chemotherapy administration. The appearance of skeletal metastases in patients with PCa is the most common sign of disease progression. Almost 85 % of PCa patients who die from their disease have skeletal metastases3.

Until today, prostate-specific antigen (PSA) level represents the most sensitive tumor marker available for monitoring disease progression. However, during the last decade, studies have been focused on the action of osteoprotegerin (OPG) as a regulator of bone metabolism, indicating the possible involvement of OPG in the biological mechanisms of PCa4,5.

OPG is a dimeric glycoprotein, member of the tumor necrosis factor (TNF) – receptor family expressed by osteoblasts. It influences bone metabolism by regulating the biological activity of osteoclasts through a cytokine system, which includes the receptor activator of nuclear factor kappa-B ligand (RANKL), its receptor (RANK), and OPG. Therefore, OPG acts as a soluble receptor for RANKL, which inhibits RANKL-RANK binding. Thus, OPG competes with RANKL’s action and as a result, inhibits the activation of osteoclasts, suppresses osteoclastogenesis and protects the skeleton from excessive bone resorption6.

Indeed, in various studies including patients with different kinds of tumors, serum OPG levels have been associated with aggressive metastatic disease and poor prognosis7. In gastric carcinoma higher OPG levels are related to tumor aggressiveness, while in bladder carcinoma OPG appears to increase the survival of metastatic cancer cells8,9. In breast cancer, the role of OPG in the development of the disease is not clear. It has been found that OPG is expressed in primary non-invasive tumors and in metastatic tissues as well, while OPG serum levels have not been related to stage or disease prognosis7,10. On the other hand, lower serum OPG levels have been reported in multiple myeloma patients in comparison with controls11. In PCa, OPG may be a useful marker of advanced bone disease, and it is likely to have a potential role in early disease relapse12-14.

The present study evaluates the hypothesis of whether the elevated OPG concentration in the serum of PCa patients is associated with advanced disease and the occurrence of bone metastases, and therefore it could play a significant role in the follow-up of metastatic disease.

The current case-control study was performed according to the Aristotle University of Thessaloniki policy for investigative research and was approved by the local ethics committees of the participating hospitals (Ministry of Health and Social Solidarity, Γ.ΕΚΕΠΥ/5342, 29/09/2009). All 172 male subjects included in the study provided written informed consent. Blood samples were collected from all male subjects, who were divided into three groups: a group of 41 healthy men with no history of prostatic diseases, which served as the control group and two groups consisting of 131 patients with histologically proven PCa. At sampling time 65/131 PCa patients were newly diagnosed, while 66/131 PCa patients were already under hormonal therapy [luteinizing hormone-releasing hormone (LHRH) analogs and/or antiandrogens]. None of the patients with metastatic PCa was under bisphosphonate treatment, in order to avoid interfering with bone metabolism. Patients with metastatic PCa underwent further sampling during the 38-month follow-up period.

Group A consisted of 49 PCa patients (mean age 69.9 ± 6.9 years) with skeletal metastases confirmed by imaging techniques; Group B consisted of 82 patients with localized PCa (mean age 68.7 ± 7.3 years), and Group C of 41 healthy male controls (mean age 46.6 ± 12.5 years). Tumors were staged using TNM classification and were graded according to the Gleason score. The extent of bone metastases (EOD) was confirmed by bone scintigraphy and computed tomography (CT) or magnetic resonance imaging (MRI), before serum sampling. Radionuclide bone scans using 99mTc-MDP were performed to determine active foci of metastatic bone disease and they were classified into osseous metastasis-positive and osseous metastasis-negative scans. Clinical and pathologic data of the 172 PCa patients included in the study are shown in Table 1.

All samples were collected after an overnight fast. Blood samples were collected in sterile tubes without additives (heparin/EDTA). In order to prepare the serum samples, tubes remained at room temperature for sufficient time before centrifugation (3,000 rpm for 10 minutes). After separation, serum samples were divided into several aliquots to avoid repeated freezing and thawing, and kept in a freezer (-20 oC). For long term storage, samples were stored at deep freeze conditions (-80 oC). An instant enzyme-linked immunosorbent assay (ELISA) commercially available kit (Bender MedSystems, Vienna, Austria) was used for OPG measurements in serum. The procedure followed was in accordance with the manufacturer’s guidelines. There was not any cross-reaction observed. The calculated overall inter- and intra-assay coefficients of variation were 8.0 % and 7.0 %, respectively. Serum total PSA was determined by a “sandwich” type immunoradiometric assay (IRMA) (Immunotech, Prague, Czech Republic).

There was not observed any significant correlation between OPG concentrations and patients’ age (data not shown). Significantly elevated values of serum OPG were observed in group A compared to group B, and group C (as shown in Figure 1 and Table 2), while higher OPG values were reported in patients with advanced metastatic disease with multiple (EOD >5) metastatic lesions (p <0.001). 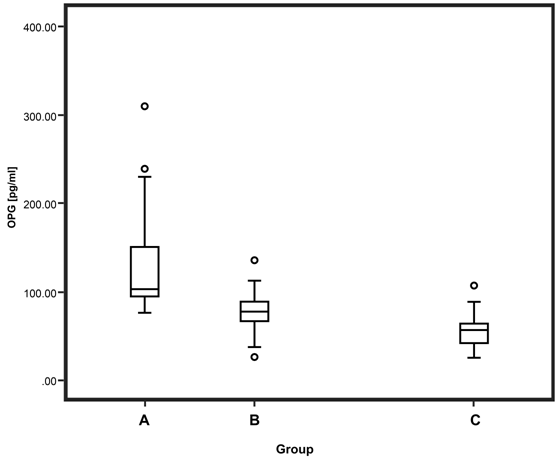 Among the 65/131 newly diagnosed hormone–dependent PCa patients there was observed statistically significant difference in OPG levels between the metastatic PCa patients and those with clinically localized disease (Table 3). Median OPG measurements in the untreated groups were significantly higher than in the healthy controls as well (p <0.001), whereas, there was not observed any statistically significant correlation between the 65 untreated metastatic PCa patients and those hormonally treated.

Moreover, statistical analysis was performed between Group A and B with receiver operating characteristics curves (ROC analysis). The ROC analysis concerning the state of the disease: metastatic (group A) and nonmetastatic, localized PCa (group B), gives the characteristics of the curve and the optimal cut-off point between them (Figure 2, Figure 3). 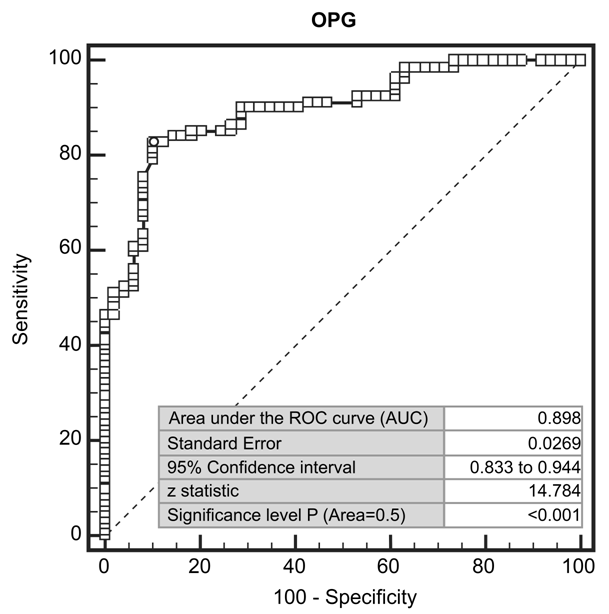 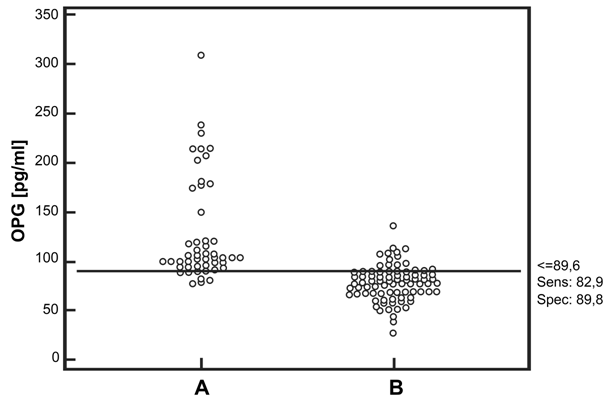 The shape and the position of the curve (Figure 2) provide information on the resolution of the test (visual assessment). The area below the curve represents the probability of proper classification of a pair of patients with metastatic and locally controlled PCa. Therefore, the closer the ROC curve is to the upper left corner, the higher is the overall accuracy of the test. However, in PCa screening, because benign enlargement of the prostate can lead to abnormal high PSA values, false positive results are common. In that case, maximizing the specificity is important (moving toward the lower left corner of the ROC curve).

By the end of our study, in 15.3 % of PCa patients in total, there was observed metastatic bone disease progression, while 20/131(15.3 %) PCa patients became hormone-resistant. OPG values in those patients were significantly increased compared with hormone-sensitive PCa (p <0.001) (Table 4).

In patients with advanced PCa, bone metastases usually result in severe pain and morbidity while stimulating mixed bone remodeling activities. Metastatic PCa cells often affect bone metabolism, in an indirect or direct way, including both bone resorption and formation processes15. However, their effect is expressed as predominating osteoblastic bone lesions.

It has been reported that the RANKL, OPG, and RANK axis plays a crucial role in bone turnover and their significance in the development of skeletal metastases has also been described in previous studies16-17. RANK is expressed by mature osteoclasts and their precursors, while RANKL and OPG expression has been detected in mature osteoblasts, in some stromal bone marrow cells and some lymphocytes in lymph nodes18. On the other hand, PCa cells probably secrete soluble factors in order to stimulate RANKL or OPG production by osteoblast/stromal cells, or directly produce and secrete RANKL and OPG16,18.

Thus, OPG by binding to RANKL prevents it from binding to RANK and, in that way it suppresses osteoclastogenesis and influences bone remodeling and metastatic bone lesions in PCa19.

OPG levels in the present study were statistically significantly elevated in PCa patients, while higher values (sensitivity: 82.9 % and specificity: 89.8 %, as proved by ROC analysis) were present in the serum of patients with metastatic bone disease, suggesting that OPG expression is associated with CaP progression to bone. As human PCa cells stimulate osteoblasts in vitro, OPG is produced not only by bone marrow stromal cells but by PCa cell lines as well14,20. So, in metastatic PCa patients, higher OPG levels may appear due to the predominated osteoblastic stimulation as a result of PCa cells in bone microenviroment12.

Previous clinical data support that advanced PCa patients with bone metastases exhibited increased serum levels of OPG compared to those with organ-confined disease and suggested that OPG could be an important survival factor for hormone-refractory PCa as well12-14,18,20. Furthermore, OPG over-expression appears to be associated with disease status in PCa (Table 5).

Ηigher PSA levels are predictive of metastatic bone disease among PCa patients22.In the current study PSA levels in metastatic PCa patients were significantly higher compared to non-metastatic and control groups (p <0.001). It seems that PSA promotes osteoblast differentiation through its protease activity and stimulates OPG production thus contributing to bone metastatic disease23. However, as Brown et al confirmed that ‘although PSA plays a superior role in recurrent PCa it is not indicative of bone metastatic spread’12. Moreover, in our study increased OPG concentrations were revealed in patients with higher bone metastatic spread. Indeed, according to Philips et al, increased expression of serum OPG reflects the extent of PCa metastatic bone disease and is predictive of biochemical failure24. Moreover, as Kamiya et al added ‘serum OPG and EOD >3 could be independent prognostic factors for PCa-related death’25.

According to the treatment provided, Tamada et al reported that androgen ablation affects bone metabolism and OPG levels as well26. Our results are in good agreement with the works of Jung et al and Brown et al who concluded that OPG levels did not differ among PCa metastatic patients with or without hormonal treatment12-13. It seems that in advanced PCa there is no significant change in OPG levels after hormonal treatment commencement among metastatic patients, though, as Holen et al reported, OPG’s expression is usually increased in hormone-refractory PCa compared with hormone-sensitive cell lines20.

Some limitations present in our study were a) the limited number of metastatic compared to non-metastatic patients and b) OPG’s increased values that may not reflect its actual activity in bone microenvironment, due to the variety of cytokine and hormones that regulate OPG’s production in many tissues27. However, in the present study, the elevated values of both PSA and OPG suggest the presence of advanced disease and correlate with radiologically proven bone metastases.

Our data suggest that elevated OPG serum levels appear to be a useful marker of metastatic bone spread in PCa patients and that OPG could indicate a significant role in the follow-up of patients with advanced metastatic disease.

In conclusion, our results demonstrate that serum OPG is a reliable marker of bone metastatic extends in PCa. It could play an important role in early disease progression, but further research is warrant to establish its full potential as a marker of treatment failure and tumor survival during metastatic bone progression.