Background: The diagnosis of acute abdomen in the emergency setting, still remains a challenging problem. In these cases timely diagnosis and management is of great importance, while the anesthetic risk is high. The combination of the risk of an open laparotomy and the relative high likelihood of negative findings when performed, creates the need for a better approach. The alternative actually exists since 1911 when Eruheim made the first gasless laparoscopy. The aim of this study is to put back into the spotlight, gasless laparoscopy in the differential diagnosis of acute abdomen and to underline the advantages of this simple, cheap and very useful technique, especially in patients that require prompt diagnosis and have relative or absolute contraindications to general anesthesia or pneumoperitoneum.

Methods: This study included 49 patients that were managed with gasless laparoscopy for the diagnosis of acute abdomen, from 2011 to 2013. Two techniques were used: the mechanical lift of the anterior abdominal wall and the LapVision device.

Results: From the 49 patients included in the study, 41 were diagnosed with gasless laparoscopy while in eight the results were uncertain or there wasn’t any pathology involved. With both techniques used, sample of the intraperitoneal fluid or biopsy could be obtained.

Conclusion: The gasless technique for laparoscopy is an extremely useful mean of diagnosis in emergency conditions, or for patients with contraindications to undergo laparoscopy by pneumoperitoneum. Requiring only local or regional anesthesia, this technique could easily find application in diagnosis and treatment, while avoiding unnecessary laparotomies. Hippokratia 2015, 19 (1): 69-72.

The differential diagnosis of acute abdomen remains a complex clinical issue because, on one hand the patient involved could be already compromised and the time available for diagnosis limited, and on the other hand due to frequent lack of diagnostic means [computed tomography (CT), magnetic resonance imaging (MRI), ultrasonography (US)]. In such cases, diagnostic laparoscopy may solve the differential diagnostic problem. There are, however, patients where pneumoperitoneum is contraindicated (head trauma, brain tumors, etc.). In these patients, gasless laparoscopy could be a valuable alternative.

Gasless laparoscopy is the laparoscopic procedure in which, instead of pneumoperitoneum, the operational space in the abdomen is created by various mechanical means that raise the abdominal wall.

The method is not novel, but is currently revalorized in the above described context, and used more frequently. The idea of gasless laparoscopy belongs to Eruheim who described it in 1911. In 1985 Muhe achieved the first laparoscopic cholecystectomy without pneumoperitoneum. Currently, this technique is used in emergency surgery, especially in debilitated patients and in gynecological cases with uncertain diagnosis.

Three hospitals were included in this study: Hospital of Obstetrics and Gynecology “I.A.Sbarcea” of Brasov, Children’s Hospital of Brasov and Emergency Hospital Roman, where 49 gasless laparoscopic procedures were performed during the period 2011-2013.

For these 49 procedures, two methods were used: the mechanical lift of the anterior abdominal wall (laparolift) and the LapVision system (Pajunk GmbH, Geisingen, Germany). Laparolift can be performed in many ways by instruments that, while fixed to the operating table, raise the abdominal wall1. We chose a sui-generis alternative, in which an incision is made about 2 cm from the base of the navel, the abdominal wall is afterwards raised with two Kocher clamps and the laparoscope is introduced in the abdominal cavity. The other method uses a trocar system with a balloon around the end of an “optical trocar” which is introduced into the peritoneal cavity. Then, the balloon is inflated and a 3.5 mm laparoscope is introduced through that trocar, obtaining a view window through the balloon in the abdomen. Regarding the anesthesia used in gasless laparoscopy, it can be either regional or local anesthesia. All our cases were performed solely under local anesthesia by injecting 1% solution of lidocaine (10 mg/ml, 20 mls), layer by layer, on the anterior abdominal wall, at the site of incision.

Final diagnoses were established in 41 patients and are presented in detail in Figure 1, while in eight patients no obvious cause was identified or existed. Of these eight cases without diagnosis, five involved multiple trauma with symptoms of acute abdomen, in which we could not identify any pathological findings by gasless laparoscopy. The other three cases involved intense abdominal pain, in older patients, with severe neurological and cardiological problems, in whom mesenteric ischemia was suspected, but was eventually excluded, without revealing though any obvious cause for the pain. 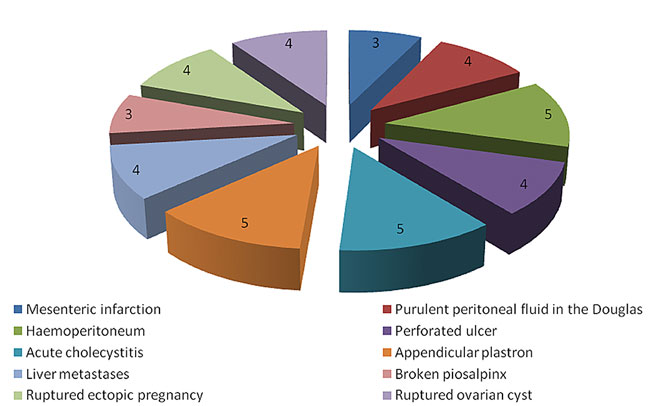 Figure 1. Number of cases diagnosed by gasless laparoscopy as distributed based on their diagnosis.

Treatment followed in each case, depended on the diagnosis and is presented on Table 2. Based on our experience and local guidelines applied, gasless laparoscopy is currently in use in our institutions only for diagnostic purposes and this results in managing these cases either with gas laparoscopy or with laparotomy. It is though under consideration, once our experience is advanced, to use this method for therapeutic applications in the future. Regarding the eight patients in which laparoscopy was inconclusive: three were managed conservatively and further investigations were performed, while in the five cases of multiple injury with abdominal pain, gasless laparoscopy established that the pain was not caused by internal trauma, needed to be treated surgically, allowing in this way conservative management, with good results, thus avoiding unnecessary exploratory laparotomy.

The use of gasless laparoscopy has a number of advantages resulting from the lack of side effects and complications caused by the creation of pneumoperitoneum by CO22.

Regarding the issue of gasless laparoscopic surgery, the available studies in the literature are relatively few and the largest series published are comparable to ours. In a larger study, Paolucci et al1 studied the gasless method in a group of 54 patients that underwent laparoscopic surgery achieving: 37 cholecystectomies, 5 diagnostic laparoscopies, 3 appendectomies, 5 cystectomy and 4 biopsies of liver metastases. This author and others1-6 used exclusively the laparolift method, with the LapVision variant not being mentioned. An interesting study by Koivusalo et al, showed that gasless versus classical laparoscopy offers advantages in terms of postoperative recovery: nausea and vomiting were decreased by 62%, pain by 50% and patients were discharged 7 hours earlier7. Also a study of Ge et al, in 100 cases of appendectomies performed by gasless laparoscopy showed significantly decreased hospital costs8.

Both gasless systems have the advantage of avoiding general anesthesia, requiring only local or regional anesthesia. Also, both allow the use of any ordinary tools for aspiration and drainage, making the technique cheap and easy to implement.

LapVision system has the additional advantage that it does not exert traction on the abdominal wall9 which results in reduced pain, its flexible trocar can be left in place for drainage, or for the possibility of an easy second look laparoscopy, and additionally the system allows the performance of biopsies through the biopsy channel attached to the trocar.

Gasless laparoscopy performed by both methods has some disadvantages as well. First of all, the view is somewhat inadequate, especially in the lateral and inferior quadrants. Distension of the abdominal wall with the laparolift method is in a pyramid like shape that creates the effect of a tent and most importantly, can be painful10. In the obese patients or those with a thick abdominal wall, achieving gasless laparoscopy is difficult.

Complications related to the blind insertion of the Veress needle and the first trocar can theoretically be avoided, since the open approach technique is used instead. It has to be mentioned though that neither this technique is free of complications. Thus in gasless laparoscopy, all described entry related complications can occur.

Post-operative complications are commonly related to the abdominal incision and are similar to the complications of classic surgery: parietal hematoma, infection at the incision site and dehiscence. In our study, there were five cases of infection at the site of the incision (three cases of pelviperitonitis and two of perforated ulcer) and one case of parietal hematoma. All cases with incision infections were managed by antibiotics and local treatment, while the hematoma was managed by drainage.

Also, in our study two intraoperative complications occurred, that involved bleeding after hepatic biopsy with the LapVision system. They were managed conservatively, with drainage and good post-operative outcomes.

Specific to the laparolift system, increased post-operative pain of the anterior abdominal wall was observed, caused by the mechanical lift. Especially in six cases treated this way, the postoperative pain was very intense and high doses of painkillers were required. In two of these patients, pain was reported at the trocar site 3 weeks after surgery.

The purpose of diagnostic gasless laparoscopy, as a last resort in an acute abdomen case, is to reveal a pathognomonic finding (hemoperitoneum, purulent peritoneal fluid, changes of color or size of the bowel) that would justify surgery, especially in patients with high anesthetic and / or surgical risks11.

Basically, the target patients for this type of investigation are:

1. Critical patients with major anesthetic risk,
2. Patients with contraindications to capnoperitoneum / pneumoperitoneum (absolute or relative)12:
• Intracranial hemorrhage13,14,
• Major cardiac decompensation,
• Septic shock,
3. Patients with acute abdomen, traumatic or not, where diagnosis is uncertain, in the setting of13,14:
• Critical general condition,
• Rapid deterioration of vital signs,
• Unavailability of other diagnostic means: CT, MRI, US.

In these patients, diagnostic gasless laparoscopy that identifies hemoperitoneum should be followed by laparotomy.

Gasless laparoscopy is a useful method for the differential diagnosis of acute abdomen causes in cases of extreme graveness and urgency. Use of this technique, allows clarification of the diagnosis and also acquisition of the necessary information to determine the appropriate therapeutic approach. In this way unnecessary laparotomies can be avoided. Another advantage is that this method uses only local or regional anesthesia, which makes it possible to be performed easily, even on the emergency department setting. In addition, the simplicity of the method makes it economically feasible.