Skip to content
hippokratia.gr > Volume 20 (2016) - Issue 3 > The results of molecular genetic testing for RET proto-oncogene mutations in patients with medullary thyroid carcinoma in a referral center after the two decade period

Abstract
Background: Medullary thyroid carcinoma (MTC) is a type of thyroid neoplasm which originates from parafollicular cells, and it is commonly diagnosed by calcitonin screening. Besides the sporadic form, the heritable form of MTC is characterized by constitutive activation of the RET (REarranged during Transfection) proto-oncogene caused by different mutations.
Method: We collected data regarding RET genetic screening performed in the Center for Endocrine Surgery in Belgrade during a 20-year-period. The study group included 249 MTC patients who were genetically tested for RET mutations by Sanger’s sequencing method.
Results: Genetic screening of the study population revealed nine different mutations of the RET gene in 42 carriers. The most common mutation was C634F, and it has been detected in 31 % (13/42) of individuals, while C618R, L790F, and S904S were present in only 2 % (1/42) each in the study group. Detected mutations were unequally distributed in different RET gene exons. Among MTC patients, 67 % (28/42) had mutation harbored in exon 11, while the rarest mutation was located in exons 10 and 15, each present in only 2 % (1/42) of patients.
Conclusions: The RET gene mutation profile has a unique distribution in this study population when compared with the other European populations. The mutations in codon 634 are most common; therefore the cost-reducing genetic screening should primarily target this codon, and if the negative outcome appears, then other codons should be examined in the order that depends on their occurrence. Hippokratia 2016, 20(3): 187-191.

Medullary thyroid carcinoma (MTC) is a type of thyroid neoplasm which originates from the parafollicular C-cells, which produce the hormone calcitonin. MTC accounts for about 5 % to 10 % of all thyroid carcinomas, and it is responsible for 8 % to 15 % of all thyroid cancer-related deaths1. The early diagnosis and the preoperative management of MTC are most frequently established by calcitonin screening2. On the molecular level, the key pathogenetic event of MTC initiation is constitutive activation of RET proto-oncogene. The RET (REarranged during Transfection) gene consists of 21 exons, and it encodes a 170 kDa tyrosine receptor protein. This protein has a transmembrane domain, an extracellular domain with a ligand binding site, and an intracellular tyrosine kinase (TK) domain3. The product of RET gene plays an important role in the cell signaling in the neural tissue, especially at the early stages of embryonic development. Mutations in the RET gene lead to abnormalities in cell proliferation and differentiation in neural crest-derived tissues, such as the C-cells and the adrenal medulla cells4. Medullary thyroid cancer appears in two distinct forms. The rare familial form is genetically determined, while the sporadic form is more common, but its etiology has not been clearly defined so far5. Germline mutations of RET gene lead to the development of heritable forms of MTC, while somatic mutations are discovered in a major quantity of sporadic MTC6. Mutations which activate TK receptor by ligand-independent dimerization and cross-phosphorylation are located in the codons 609, 611, 618, 620, 630, and 634 (exon 11) which encode the extracellular domain of the protein. The intracellular domain is affected when mutations are harbored in codons 768, 790, 791 (exon 13), 804 (exon 14), 883 and 891 (exon 15), and 918 (exon 16). These mutations create abnormalities in protein structure which interfere with the intracellular ATP binding for the TK receptor7. About 25 % of MTC cases represent a familial autosomal dominant form of the disease. The inherited forms appear as multiple endocrine neoplasia II (MENII) syndromes, which are characterized by the co-existence of MTC and pheochromocytoma (PHEO) together with primary hyperparathyroidism (PHP) in the case of MENIIa. In the case of MENIIb syndrome, mucocutaneous neuroma and muscular hypotonia are present8. The genetic screening of the RET gene mutations is a very important diagnostic tool for detection of inherited disease and identification of mutation carriers in families affected with MTC. Different human populations differ in the allelic frequencies of RET mutations, and therefore it is important to determine the mutation frequencies in each considerable population. In this study, we present the results of the RET genetic screening, which was performed at the Center for Endocrine Surgery of Clinical Center of Serbia in the past 20 years on all patients who were diagnosed with MTC based on the postoperative histopathological examination. Presently there are no published articles which describe the MTC’s genetic epidemiology in the Southeast Europe. We believe that these data will bring a greater light on the incidence, genetic structure and clinical characteristics of MTC patients from this region.

Over a period of 20 years (1995-2015), 3,244 patients underwent surgical treatment for different types of thyroid cancer, and 249 of them were diagnosed with MTC in our referral center for the Republic of Serbia. These patients were submitted to genetic testing for RET proto-oncogene mutations in exons 10, 11, 13, 14, 15, and 16. The genetic screening for RET mutations was routinely established in 2004, and the patients who were previously diagnosed with MTC, based on their pathohistological examination, were then retrospectively tested. They were genetically examined either they were diagnosed with MTC, or because they had a family member with the same disease. Before genetic testing was performed, all involved patients gave the informed consent. The study was approved by the ethical committee of the Clinical Center of Serbia (decision No: 1575/7, 21-5-2015).

Genetic screening in the study population revealed nine different mutations in the RET gene in 42 carriers. Of these 42 carriers of RET gene mutations, 19 individuals (7 men and 12 women) were not related, while 23 (10 men and 13 women) of them were related (cousins). The demographic data, molecular genetics and clinical characteristics of the 42 carriers of RET gene mutations, are presented in Table 1. Of the 42 MTC patients, 33 % (14/42) had MEN IIa syndrome, 29 % (12/42) had familial MTC, while the rest (38 %) of patients (16/42) had either sporadic MTC or C-cell hyperplasia. The proportion of familial MTCs in the total number of MTC patients was 4.8 % (12/249). The pedigrees of the eight families with FMTC are displayed in Figure 1. In the study population, the proportion of hereditary MTC was 17% (42/249). The most common prevalent mutation in the 42 carriers of RET gene mutations, was C634F detected in 31 % (13/42) of them, while C618R, L790F, and S904S were present in only 2 % (1/42) each in the study group. The clinical manifestation in the first family where the mutation Tyr791Phe was detected, was C-cell hyperplasia, as well as in the single sporadic case of the same mutation, where the C-cell hyperplasia was accompanied with PHP. The C-cell hyperplasia was also the clinical manifestation of a single sporadic case who carried Leu790Phe mutation. Detected mutations were not equally distributed in different exons of the RET gene. Among these MTC patients, 67 % (28/42) had mutation harbored in exon 11, while the rarest mutations were located in exons 10 and 15, each present in only 2 % (1/42) of patients. Figure 2 shows the percentage of mutation distribution in the different RET gene exons. 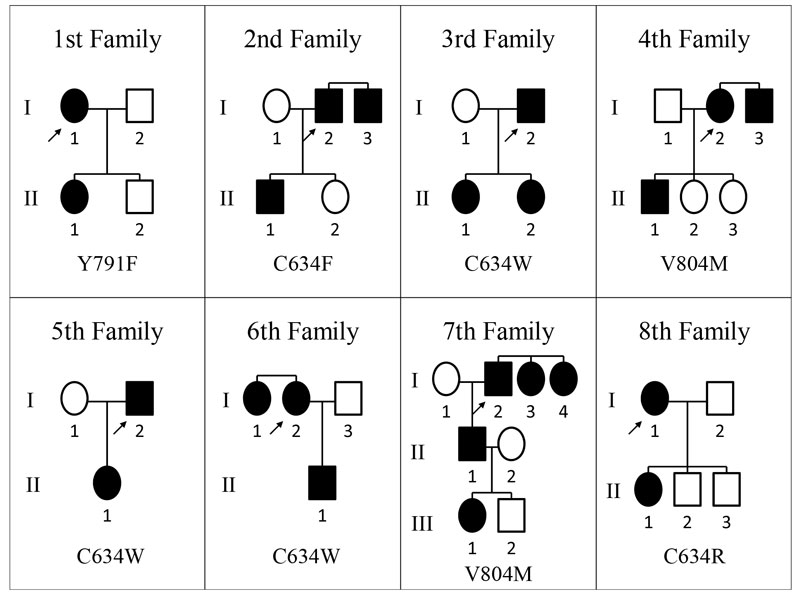 Figure 1: The pedigrees of the eight families with heritable form of medullary thyroid carcinoma treated in the Serbian Referral Center for endocrine surgery. The black color stands for the affected individual, while the arrows represent probands. The familial mutation is shown at the bottom of each box. 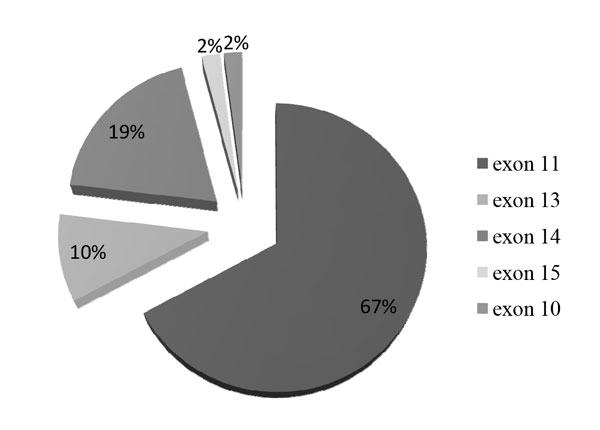 Figure 2: The percentage of the different RET (REarranged during Transfection) gene mutations presented by their localization in different RET gene exons.

Genetic screening for germline mutations of RET proto-oncogene has been widely used as a mean for diagnosing, preventing and treating cancer, having the greatest impact on patients with MTC. In families with identified germline mutations in the RET gene, testing of the family members is usually trouble-free, because a targeted approach focuses the specific codon which harbors the mutation11. In new families with familial MTC, the usual strategy for genetic testing is to sequence the most frequently affected exons. If no RET mutation is found, it is necessary to sequence the entire coding region of the RET gene, especially in kindred members of families where the heritable form of MTC has not been diagnosed based on the most often tested codons. The vast majority of laboratories that perform genetic testing for RET mutation sequence selected exons (most commonly 10, 11, 13, 14, 15, and 16, and in some laboratories, exon 8) or the entire coding region12. According to previous studies, 3-7 % of patients with presumed sporadic MTC, are confirmed as carriers of familial MTC, and therefore it is important to test new MTC patients for RET mutations in order to detect the increased risk at family members13,14. Genetic counselors and physicians require a considerable effort when they have to provide information to patients with MTC, regarding clinical expression, risks, and disease outcome. This results from the differences encountered in disease’s time of initiation, symptoms, prognosis, and response to therapy. Different human populations and ethnic groups display a considerable variability in the frequencies of RET mutations. Table 2 shows the comparison of RET mutation frequencies obtained in the Serbian population with other European cohorts15-19.

The characteristic of the Serbian ethnic group is the Cys634Phe mutation, which is prevalent in 31 % of genetically confirmed cases of MTC. Like in other cohort studies, the mutations in codon 634 predominate in all European populations. When mutations in codon 634 are considered, there is no pattern in the profile of clinical manifestations and the time of diagnosis, as it can be witnessed from the displayed results. The majority of MENIIa cases were carriers of this mutation. However, the mutations detected in codon 13 (Leu790Phe and Tyr791Phe) have a common clinical characteristic which is C-cell hyperplasia. The consensus document of the 7th international workshop on Multiple Endocrine Neoplasia and National Cancer Centers Network states that patients with mutations found in codons 790 and 791 have the relatively smaller risk for developing the aggressive form of MTC20,21. According to the American Thyroid Association, the highest risk is attributed to the carriers of Val804Met and mutations in codon 63422. Carriers of mutations in codon 618 hold a medium risk for developing aggressive MTC, based on the findings of the North American Neuroendocrine Tumor Society23. In accordance to the other studies, we detected only a single carrier of the Cys618Arg mutation, which is also only occasionally present in the other European cohort groups. Although the Ser904Ser mutation has a silent phenotype effect on protein structure, its role in MTC development remains controversial. In the current study, a single case of Ser904Ser carrier was found to have C-cell hyperplasia after pathohistological examination of the excised thyroid tissue. Other studies also describe this mutation among patients with MTC, but with inconclusive evidence regarding any genetic association, expressing the need for further studies to demonstrate the link between Ser904Ser mutation and MTC development24,25. The American Thyroid Association and European Thyroid Association recommend the genetic screening as a very useful diagnostic tool for all MTC patients22,26. Since the mutations in codon 634 are most common in Serbian and in other European populations, a cost-efficient genetic screening should primarily target this codon, and in case of negative findings, the other codons should be examined for mutations according the order of their prevalence. The mutations in the cysteine-rich codon 634 are most prevalent since they cause the early onset of disease, especially MENIIa syndrome, where they are present in about 85 % of cases7,27,28. There is a possibility that one could be a carrier of multiple RET gene mutations either in sporadic or familial cases, which was previously published in the paper of Jindrichiva et al, and therefore the testing of multiple exons is necessary for adequate genetic diagnosis29. Thyroid carcinoma is the most common endocrine malignancy worldwide with its diagnostic approach comprising of relevant imaging, clinical examination, and fine-needle aspiration biopsy. In approximately 25 % of patients with thyroid nodules, the diagnosis cannot be established by cytological examination30. The influence of molecular genetic and epigenetic biomarkers is expected to play a great role in the future diagnostic strategy for thyroid carcinoma31. The current whole-gene sequencing of the RET gene will imminently be replaced by the next-generation sequencing in the future, which will provide us with more conclusive evidence about the genetic features of the MTC and prediction of its evolution.