Background: This study investigated the relationship between the neutrophil-to-lymphocyte ratio (NLR) and platelet-to-lymphocyte ratio (PLR) values withoxidative stress in active Crohn’s disease (CD) patients. We investigated whether these parameters were useful for follow-up assessments of CD activity.
Methods: Forty-nine patients with a confirmed diagnosis of CD (24 active and 25 inactive) and 38 control subjects were enrolled in the study. We measured serum activity of superoxide dismutase (SOD) using an enzyme-linked immunosorbent assay (ELISA) and malondialdehyde (MDA) levels using a spectrophotometric method. Neutrophil, lymphocyte and platelet counts were recorded, and the NLR and PLR values were calculated from these parameters.
Results: Patients with active CD exhibited significantly higher serum levels of MDA (p =0.007), NLR (p =0.034), and PLR (p =0.026) than inactive CD patients. Receiver operating characteristic (ROC) curve analysis demonstrated that the optimum cut-off values of MDA, NLR, and PLR based on the differences between active and inactive patients were 0.14 µmol/L, 2.58, and 192.26, respectively. The NLR value increased in active patients with elevated MDA levels as a dependent variable (B: 0.422, p =0.029).
Conclusions: We suggest the use of MDA, PLR, and NLR values as a noninvasive test to evaluate disease activity in CD patients. NLR values may also reflect the presence of oxidative stress, and this value may be efficient and useful in determining CD activity. Hippokratia 2016, 20(4): 268-273

Crohn’s disease (CD) is characterized by a chronic uncontrolled inflammation that affects the gastrointestinal tract and exhibits periods of relapse and remission1,2. Various methods are used to evaluate CD activity, such as investigations based on endoscopic, clinical symptoms and laboratory results (e.g., C-reactive protein, fecal calprotectin, and lactoferrin). Evaluations of inflammation are crucial to follow-up of the disease and to prevent complications3. Endoscopic procedures are invasive and not widely available methods to establish a definitive diagnosis in determination of disease activity. Therefore, reliable and noninvasive markers to determine disease activity are required.

Activated and massively infiltrating leukocytes produce large quantities of reactive oxygen species (ROS). ROS are destructive and may contribute significantly to the pathogenesis of CD4. Oxidative stress plays a role as a potential etiologic and triggering factor in CD5,6. Oxidative stress is a condition in which the antioxidant mechanisms, such as superoxide dismutase (SOD), cannot neutralize the increase in ROS levels in the cell2,7. Oxidative stress8,9 or inflammatory biomarkers, such as the neutrophil-to-lymphocyte ratio (NLR)10,11 or platelet-to-lymphocyte ratio (PLR)12, are used as markers in the assessment of disease activity in inflammatory bowel disease (IBD). Malondialdehyde (MDA) is a lipid peroxidation (LPO) product that reflects the damage of reactive oxygen species to lipid membranes, and MDA is a biomarker of oxidative stress7.

Our study investigated the relationship between the oxidative stress markers MDA and SOD, which play a role in the etiopathogenesis of IBD, and NLR and PLR to assess inflammatory parameters and other routinely used inflammatory biomarkers, such as the erythrocyte sedimentation rate (ESR) and C-reactive protein (CRP). Our study evaluated the usability of these parameters as markers of disease activity in CD.

Forty-nine patients with CD and 38 healthy volunteers agreed to participate in this study. The ethics committee of the Medical Faculty of Kocaeli University [decision: KOU KAEK.2013/77] approved this cross-sectional study, which was performed between July 2013 and December 2013. Written informed consent was obtained from each participant. CD patients attended the Gastroenterology unit of our hospital for their follow-up visits. The diagnosis of CD was based on the standard clinical, radiological, endoscopic, and histological criteria at the initial diagnosis of their disease. The severity of disease activity was evaluated in each patient according to the CD Activity Index (CDAI). The CDAI is composed of a symptom-based scoring system, including the frequency of liquid stools, the severity of abdominal pain, general well-being, the presence of extra-intestinal manifestations, abdominal mass, current use of antidiarrheal treatment, hematocrit level, and body weight. Clinically inactive disease was defined as an estimated CDAI score of 150 or lower, and patients with CDAI scores higher than 150 were considered to have clinically active disease13. According to disease activity, the 49 CD patients were divided into two groups: 24 patients with active CD (ACDP) and 25 patients with inactive CD (ICDP). Most patients continued using their current medical treatments for CD during the study. CD patients who were smokers, diabetics, pregnant women, patients suffering from another chronic inflammatory disease or malignancy, patients with any evidence of an acute viral or bacterial infection and patients who were consuming antioxidant supplements within the preceding four weeks were excluded from the study. Healthy controls included volunteers with no history of CD. Thirty-eight age and sex matched healthy subjects over 18 years of age were recruited as controls from the hospital employees, who underwent their annual routine health screening. The healthy controls were volunteer non-smokers, without any prior medical diagnosis, who had not consumed any supplemental antioxidants or other drugs within the preceding four weeks. Disease duration, extra-intestinal manifestations, disease location and behavior, and drug intake were recorded.

Venous blood samples from all participants were drawn from the antecubital vein after an average fasting period of ten hours before noon and collected into anticoagulant-free tubes. Serum was obtained via centrifugation (3,000 rpm for 15 min) within 30 min and immediately frozen and stored at -40°C until analysis was performed for MDA and SOD.

Protocols were based on published methods or the manufacturer’s instructions. Complete blood count (CBC), CRP and ESR results were obtained from the laboratory database, which was requested during routine follow-ups. CBC, ESR, and CRP analyses were performed in the hematology and biochemistry laboratories of the hospital. CBC was analyzed using laser impedance technology in combination with flow-cytometric laser optical analysis and a Cell-Dyn 3700 analyzer (Abbott Diagnostics, Wiesbaden, Germany). The neutrophil, platelet, and lymphocyte counts were recorded from CBC parameters in laboratory tests, and the NLR and PLR values were calculated from these parameters. ESR was estimated using the Westergren method and an Alifax Test-1 THLAutomated Analyzer (Alifax, Italy). CRP was estimated using an immunoturbidimetric method in human serum and the Architect c16000 autoanalyzer (Abbott Diagnostic, USA).

Values are expressed as percentages (n), means ± standard deviation or medians (with 25th-75th percentiles). The Kolmogorov-Smirnov test was used to test the normality of data distribution. Variables that did not conform to a normal distribution were logarithmically transformed (base-10) to reduce the skewness of the data.

Comparisons of continuous variables between groups were performed using Student’s t-test, one-way analysis of variance and Tukey’s and Tamhane’s T2 posthoc tests. Comparisons of categorical variables between groups were performed using the Yates’ chi-square test.The relationship between parameters was defined as the dependent variable in ACDP, and NLR and PLR were evaluated using linear regression.

Receiver operating characteristic (ROC) curves were constructed for the MDA, NLR, PLR, ESR, and CRP variables, and the areas under the ROC curve values were calculated with 95 % confidence intervals (CIs) for comparison.

Optimal cut-off values for use in the diagnosis were calculated with 95 % CIs for sensitivity, specificity, and positive and negative predictive values. Analyses were performed using IBM SPSS Statistics software (IBM SPSS, IBM, Armonk, NY, USA) version 20.0, and p <0.05 was considered significantly significant. The power of the study was calculated as 97 % (α: 0.05, β: 0.20). 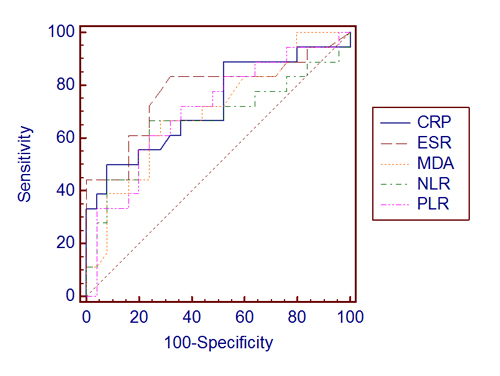 Neutrophils, lymphocytes, and platelets play important roles in the pathogenesis of mucosal tissue injury in CD14-16. Neutrophils play an essential function in the maintenance of intestinal homeostasis. Neutrophils also contribute to the inflammatory response via facilitating the recruitment of other immune cells and mucosal healing via the release of mediators that are necessary for inflammation resolution. Neutrophils are the most abundant white blood cells in the circulation, constitute approximately 50-70 % of all circulating leukocytes, and produce massive amounts of reactive oxygen species to destroy pathogens14.

MDA was the third-ranking marker for sensitivity (66.7 %) and specificity (72 %) values with a cut-off value of 0.14 µmol/L. Comparisons of the ROC curves of the investigated parameters demonstrated that serum values of NLR and PLR and serum levels of MDA could be as important as the serum levels of other routinely used inflammatory parameters, such as CRP and ESR, for disease follow-up. Many studies have demonstrated the association of chronic intestinal inflammation with increased oxidative stress7,9,17,18. Many studies investigated the use of LPO products, such as MDA, for determining disease activity in IBD due to the higher levels of oxidative stress, but this parameter was not meaningful8,9,19.

The antioxidant enzyme SOD was not important for CD activity in our study, which is consistent with Achitei et al9. However, Karp et al observed decreased SOD activity20. Antioxidant activity decreases in CD patients, and one of the drugs used in CD patients, 5-aminosalicylic acid (5-ASA), exerts an antioxidant effect21. Most of our patients, especially most of the ACDP group, were using 5-ASA, which may explain the absence of a significant difference in SOD levels between the groups as a result of the antioxidant activity of this treatment, which is consistent with Alzoghaibi et al21.

Patients’ use of various medications during the study and in long term, is one limitation of the current study. It might be possible to create subgroups comprised of patients using the same medication, to evaluate drug effects in the current study and provide an opportunity to observe differences in these subgroups attributed to these drugs. However, the number of subgroups was insufficient to evaluate the same drug in our cohort. Another limitation is the number of healthy controls. Finding healthy non-smoking men to enroll in the control group was difficult.

It might have been more suitable to perform such a study in newly diagnosed and treatment-naïve patients to exclude possible drug effect. However, we enrolled patients with ongoing treatment and in various stages of the disease. Our results suggest that these inflammatory parameters may be useful in the determination of CD activity as these parameters provide the attending physician with data regarding the increased oxidative stress in the patient (a reflection of LPO) and the ability to use a cheap and easy-to-use test in the routine follow-up of CD patients. Therefore, these features increase the clinical value of NLR. NLR may also be widely studied in routine laboratories because this measurement is clinically useful, cheaper and uses a simpler calculation than CBC. NLR may also reflect the present oxidative stress, which is more efficient and valuable compared to the other parameters investigated. We suggest that further studies should be performed with the inclusion of additional oxidant and antioxidant parameters.