Materials and Methods: This prospective study included 199 consecutive patients that were diagnosed with primary hypertension. According to ambulatory blood pressure monitoring measurements, non-dipper and dipper group were determined. PLR was determined based on the platelet count and lymphocyte count in the complete blood count.

Inflammation is thought to play an important role in the pathogenesis of atherosclerotic cardiovascular disease (CVD)7. Such markers as high-sensitivity C-reactive protein (CRP), cytokines, matrix metalloproteinase-9, myeloperoxidase, intercellular adhesion molecule 1 (ICAM-1), soluble cluster of differentiation 40 (CD40) ligand, etc. have been reported to be indicative of inflammatory status8. Indices derived from hemogram parameters have recently been defined as inflammatory markers, including the red cell distribution width (RDW), mean platelet volume (MPV), neutrophil-to-lymphocyte ratio (NLR), and platelet-to-lymphocyte ratio (PLR)9-13. PLR is the newest of these markers and was first studied in patients with malignancy14. Subsequent research suggests that higher PLR is related with worse outcome in patients with atherosclerosis-related diseases, such as coronary artery disease (CAD)12,15 heart valve diseases16 and peripheral arterial disease17. The present study aimed to determine the relationship between PLR (as a marker of inflammation), and dipper and non-dipper hypertension.

Renal failure was defined according to the glomerular filtration rate (GFR), which was calculated using the simplified version of the Modification of Diet in Renal Disease study prediction equation formula, GFR=186 x Creatinine-1.154 x Age-0.203 x 1.212 (if African-American) x 0.742 (if female)18.Patients diagnosed with chronic kidney disease were excluded according to the criteria defined by KDIGO (Kidney Disease Improving Global Outcomes) 2012 clinical practice guidelines for the evaluation and management of chronic kidney disease19.

Infection and acute illness were determined based on the anamnesis and physical examination. Among the few patients with elevated CRP, in those in which clinical findings and symptoms were not consistent with acute illness, CRP was not interpreted in favor of infection or acute inflammation.

The 24-hour ambulatory blood pressure monitoring (ABPM) was performed using a WatchBP 03 device (Microlife WatchBP AG, Switzerland); the cuff was placed on the non-dominant arm. The devices were programmed to perform measurements every 15 min between 07:00 and 23:00 (daytime) and every 20 min between 23:00 and 07:00 (nighttime). The method was considered reliable if >70% of measurements were valid. Patients with a drop in the mean systolic (SBP) and diastolic blood pressure (DBP) >10% during the night were grouped as dipper hypertension and those without such a drop were grouped as non-dipper hypertension. Blood samples were obtained between 08:00 and 10:00 following overnight fasting. Blood biochemistry and complete blood count (CBC) were determined. PLR was determined based on the platelet count and lymphocyte count in the CBC. Twenty-four hour urine was collected to measure 24 hour-urine protein and creatinine excretion. The study protocol was approved by the Ankara Numune Education and Research Hospital Ethics Committee (decision number: 614/2013, 10-04-2013) and was performed in accordance with the Declaration of Helsinki. All patients provided written informed consent in order to participate in the study.

Statistical analysis was performed using Statistical Package for the Social Sciences (SPSS) version 20.0 for Windows (IBM Corp., Armonk, NY, USA). The Kolmogorov-Smirnov test was used to determine if data were distributed normally. Numerical variables with normal distribution are shown as mean ± SD and those not normally distributed are shown as median (range). The independent samples t-test was used to analyze normally distributed parameters, whereas the Mann-Whitney U test was used to analyze parameters that were not normally distributed. The relationship between parameters was analyzed via Spearman’s correlation analysis. Multivariate logistic regression analysis was used to determine which factors were associated with non-dipper hypertension; variables that were significant based on univariate analysis (p <0.05) were included in multiple regression analysis. Receiver operating characteristic (ROC) curves were plotted to determine the optimal cutoff values for PLR for the prediction of non-dipper in hypertension and to establish optimal cutoff points for use in clinical practice. The true positive rate (sensitivity) and the false-positive rate (100-specificity) were plotted for each measurement, and the area under the curve (AUC) was determined. Cutoff values were determined based on the Youden index.

The study included 199 consecutive patients diagnosed with primary hypertension. Mean age of the patients was 50.93 ± 10.9 years and the median duration of hypertension was 3 years (1-20 years). The dipper group included 96 patients and the non-dipper group included 103 patients. There were not any differences in the demographic and clinical characteristics, or anti-hypertensive therapy between the two groups. In all, 184 of the 199 patients were taking antihypertensive agents; 112 were taking one drug, 61 were taking two drugs, and 11 were taking three drugs. All patients that were taking one pill (one drug or a fixed-dose combination of two drugs) took their pills in the morning; those that were taking two pills took one pill in the morning and the other 12 hours later at night. There were no patients on more than two pills. 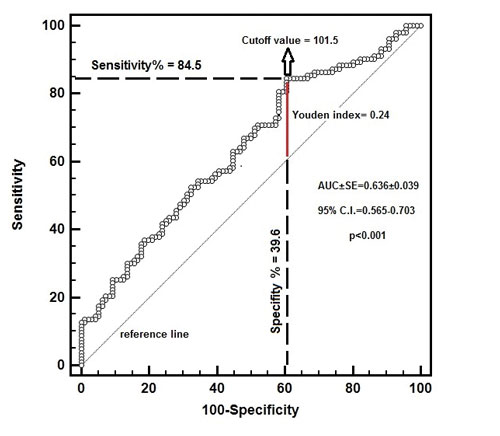 Inflammation plays a key role in most chronic diseases, particularly CVD, diabetes mellitus, connective tissue diseases, cancer, and chronic kidney disease7,27-31. Neutrophils, known as the primary cells that release inflammatory cytokines, closely interact with other blood cells – including platelets – during inflammation32. Increased platelet activity has been reported to correlate with an increase in the severity of inflammation33. Increases in the platelet count, MPV, and RDW are indicators of increased platelet activity34. Research has shown that a higher PLR in the absence of absolute thrombocytosis is associated with increased thrombosis and inflammation, which might be associated with an increase in platelet activity13,15,17. Additionally, it was posited that relative lymphopenia in the presence of a high PLR might be indicative of the effect of an elevated endogenous cortisol level due to inflammatory response35. Among a group of patients with obstructive peripheral artery disease, critical vascular stenosis and wounds due to vascular insufficiency were more common in those with a high PLR17. A study that examined the relationship between PLR and inflammation in cardiovascular diseases reported that a pre-procedural PLR >150, in patients diagnosed with ST segment elevation myocardial infarction that underwent primary percutaneous coronary stent placement, was predictive of no-reflow, with sensitivity of 75% and specificity of 74%15. A similar study that included patients diagnosed with non-ST segment elevation myocardial infarction reported a significantly higher mortality rate in the patients with a PLR >176 and a relative decrease in the mortality rate in response to double antiplatelet therapy36.

In the present study, the PLR (used as a marker of inflammation) was significantly higher in the non-dipper hypertension group than in the dipper hypertension group. Moreover, PLR was found to be an independent predictive factor. A PLR of 101.5 or higher predicted non-dipper status with 84.5 % sensitivity and 39.6 % specificity. The fact that both of the present study’s patient groups were similar in terms of smoking status, body mass index, cholesterol levels, duration of hypertension, medications used, and lack of other known chronic diseases strengthens the validity of the findings. Furthermore, the present findings are similar to those of an earlier relevant study that reported the PLR was significantly higher in non-dipper hypertensive patients, a PLR ≥107 was predictive of non-dipper hypertension (with sensitivity of 66.3 % and specificity of 68.7 %), and that NLR and hs-CRP levels were higher in non-dipper hypertension group37. Although specificity of PLR cut-off value was low our study, the values were similar37. Limitations of the present study include lack of evaluation of the relationship between markers of inflammation other than the PLR and signs of target organ damage, and the lack of follow-up to identify the effect of a high PLR level on the prognosis of hypertension. In conclusion, the present findings suggest that the PLR can be used in daily practice as a marker of inflammation because it is easy to calculate using hemogram parameters and is a cost-effective index. The present study also shows that a high PLR might be indicative of high atherosclerotic risk in hypertensive patients and a predictive value can be determined in the future.

The authors report no conflicts of interest, financial or otherwise.