Background: The SEDLine™ monitor derived patient state index (PSI) is used to follow the depth of sedation. The demand for propofol sedation by anesthesiologists or non-anesthesiologists is increasing, and there are only a few studies addressing the relationship between PSI and propofol sedation. We aimed to investigate the ability of PSI index to identify the correct level of sedation of our patients during induction to anesthesia with target-controlled infusions of propofol.
Methods: Twenty patients were enrolled in this study. The target effect site concentration of propofol was set at 1.5 μg/ml followed by increments of 0.5 μg/ml every five minutes. The PSI values and Modified Observer’s Assessment of Alertness/Sedation (MOAA/S) scale were recorded every twenty-five seconds during the infusion of propofol. Patients were considered losing verbal responsiveness at MOAA/S scale ≤ 2. Also, blood pressure, heart rate, and oxygen saturation were recorded every five minutes.
Results: The PSI values corresponding to the sedation of various depths (MOAA/S scales) and alertness with verbal response were significantly different (p <0.001). We observed a good correlation of the PSI values to the decreasing MOAA/S scale (r =0.87667).
Conclusions: The PSI index is well correlated with MOAA/S scale and effectively distinguishes the level of sedation during propofol infusion. Hippokratia 2015; 19 (3): 235-238.

The SEDLine™ (Masimo Corporation, Irvine, CA, USA) monitor is a four-channel processed electroencephalographic (EEG) monitor designed for intraoperative or intensive care use. The SEDLine™ uses a proprietary algorithm to analyze the raw EEG signal and displays the Patient State Index (PSI) values. The real-time computations of the PSI index are considered adequately competent to predict the depth of sedation during general anesthesia with various anesthetics regimens1.

The PSI monitor was launched in 2001 by PSA 4000 (Physiometrix, Inc., North Billerica, MA, USA) and SEDLine™ is the newest generation device. There are only a few studies examining the PSI in the clinical context. Although the PSI is less familiar to anesthesiologists than the Bispectral Index (BIS), Chen et al and White et al concluded that PSI is a suitable and cost-effective alternative to the BIS for evaluating consciousness during the induction of and emergence from general anesthesia2,3.

The performance of the PSI has been evaluated and found adequately concordant to the state of the patient under general inhalational anesthesia, total intravenous anesthesia, or nitrous oxide/narcotics anesthesia1. More than 88% of patients undergoing routine colonoscopy procedures under propofol sedation with a bolus technique are driven to deep levels of sedation or general anesthesia and are subsequently at risk for respiratory depression, airway obstruction, and hemodynamic compromise4.As the demand for propofol sedation services is ever increasing, we were interested in whether the SEDLine™ monitor is reliable in reflecting changes in our patient’s sedation status during escalating propofol concentrations.

The goal of this study was to investigate the ability of PSI to reflect the level of sedation during target-controlled propofol infusions.

This study was approved by the Institutional Review Board of Haeundae Paik Hospital (27-8-2013, 2013-063) and written informed consent was acquired from all study participants. Twenty patients, aged 18-55 years were enrolled in this study. Inclusion criteria were an American Society of Anesthesiologists physical status classification I-II for subjects undergoing elective orthopedic surgery under general anesthesia. Exclusion criteria were cardiac, pulmonary, renal or liver disease, and a previous allergic reaction to propofol. Patients with a history of long-term use of alcohol and those receiving medications acting on the central nervous system, such as benzodiazepines, opiates, or anti-depressants were excluded.

No premedication and opioids before induction to anesthesia were administered. All patients were monitored with electrocardiogram, non-invasive blood pressure (BP) measurements, and pulse oximetry. The forehead skin was prepared with alcohol to ensure low impedance (<10 kΩ) and good EEG signal quality. When the SEDLine™ sensor was attached, patients were instructed to close their eyes and relax their face. After obtaining a baseline reading from the Masimo monitor, patients were induced to anesthesia with a target controlled infusion of 2% propofol (Fresofol MCT 2% Inj.; Fresenius Kabi Austria GmbH, Graz, Austria). Propofol was administered according to the Schnider and colleagues model using an infusion pump (Orchestra® Base Primea, Fresenius Vial, Brezins, France)5,6. The initial effect site concentration (Ce) of propofol was set to 1.5 μg/ml and it was increased by 0.5 μg/ml at five-minute intervals. During propofol infusion, Modified Observer’s Assessment of Alertness/Sedation (MOAA/S) scale and PSI index values were recorded every twenty-five seconds. The assessment of MOAA/S scale was performed by one anesthesiologist who was blinded to the reading of PSI indices and the propofol pump settings. We defined the loss of verbal response according to the MOAA/S scales at values ≤2 (0-2) and presence of verbal response at values ≥3 (3-5). Mean BP, heart rate and oxygen saturation were also recorded at five-minute intervals. Hypotension and bradycardia (a 20% decrease from baseline) could be treated with ephedrine, phenylephrine, or atropine. Patients were encouraged to breathe deeply or were supported by manual bag ventilation if hemoglobin desaturation (SpO2 < 95%) was observed. The recording of data was concluded when MOAA/S scale reached 0. Then an intravenous dose of 0.6 mg/kg of rocuronium bromide was injected to the patients to facilitate airway management, and surgery started.

According to a previous study, a Spearman correlation coefficient between total intravenous anesthesia and arousal score was assumed to be 0.8051. Based on the internet site (http://department.obg.cuhk.edu.hk/researchsupport/Sample_size_Correlation.asp), a sample size of 20 was calculated to obtain a power of 99%, alpha of 0.05 and 10% of drop-out rate.

The ability of PSI to discriminate between the different levels of sedation corresponding to the MOAA/S scale was analyzed by Wilcoxon rank sum test and Kruskal-Wallis test. The correlation of the PSI value to the MOAA/S scale was determined by the Spearman test. p value <0.05 was considered statistically significant. The statistical analysis were performed by SAS 9.3 (SAS Institute Inc., USA) and R 3.0.0 (The R Foundation for Statistical Computing, Austria).

Eighteen patients completed the full protocol, and two patients were excluded because they kept their face grimace. The demographic characteristics of the patients are presented in Table 1. 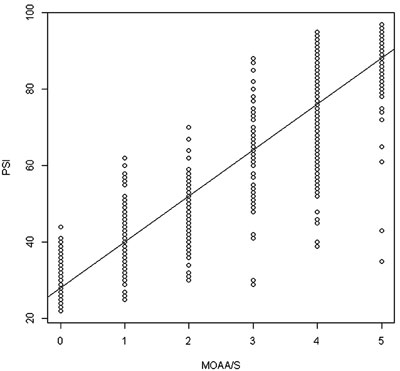 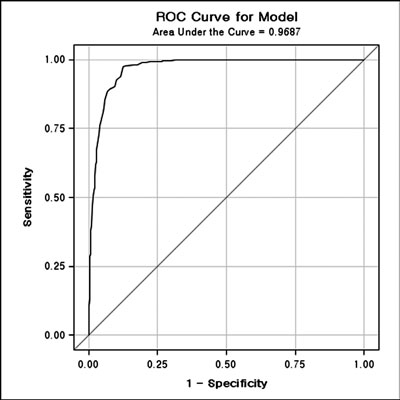 Figure 2: Receiver operating characteristic curve, which was obtained from Modified Observer’s Assessment of Alertness/Sedation (MOAA/S) scales and Patient State Index (PSI) relationship for the MOAA/S scale of ≤ 2. The calculated cutoff PSI value was 58 (sensitivity of 96%, specificity of 84% and area under the curve of 0.97).

There were no complications such as hemoglobin desaturation, hypotension or bradycardia.

This study verified that the PSI values can distinguish between different levels of sedation according to the MOAA/S scale. There was statistically significant correlation between the PSI values and MOAA/S scales. Various para-clinical EEG monitors tend to perform better under certain circumstances.

The SEDLine™ presents PSI values after advanced artifact rejection, in particular, electrocautery2,3. The PSI monitor has been designed to monitor patient sedation and residual drug effects both intra-operatively and in the intensive care unit7. The PSI monitor seems to be a more sensitive monitor for measuring small changes in the level of consciousness than the BIS monitors in un-sedated elderly patients8. Data from 4 EEG electrodes enables the PSI algorithm to simultaneously reflect global and regional brain changes7.

The PSI values range from 0 (total cortical silence) to 100 (awake state), and 25-50 indicates the optimal hypnotic state for surgical anesthesia. Sedation is a continuum from minimal sedation to general anesthesia, and sedation using propofol may lead to deep sedation and cardiorespiratory depression. Close monitoring of sedation facilitates the careful adjustment of drugs and prevents over or under-sedation. Drover et al reported that the use of the PSI significantly decreased propofol dosage and improved the recovery from propofol-alfentanil-nitrous oxide anesthesia9. However, use of the SEDLine™ to titrate sevoflurane did not improve the time to extubation or change the outcome of old (≥65 years) surgical patients receiving beta-adrenergic blockers10.

Electroencephalography as a predictor of depth of anesthesia is dependent on variable factors such as anesthetic agents, age, medication and physiology of the patients11.Also, frontalis muscular interference adjacent to the EEG leads alters the PSI values12. Caputo et al described that the relation between Ramsay Sedation Scale (RSS) and PSI became more significant (r = -0.49; p <0.001) when PSI values associated with >50% EMG were excluded because of interference from frontalis EMG12. The study of Chisholm et al shows that there was a great variation between BIS and PSI values of 61 and 8013. The correlation between two clinical sedation scales (Ramsay Sedation Scale and Observer’s Assessment of Alertness/Sedation scale) and 2 EEG-based monitors (BIS and PSI) were strongest only at the extremes of sedation states.

Although BIS is the most popular EEG monitor worldwide, the PSI monitor performed equally well in predicting the depth of sedation or anesthesia. The PSI values were lower than the BIS values by ~10-15 points at high propofol concentrations14. These findings are in close agreement with the results of our study, which demonstrated that the calculated cutoff PSI value of 58 (sensitivity 94.76%, specificity 81.02%, positive predictive value 88.44%, negative predictive value 90.89%) is lower than the calculated cutoff BIS value of 67 (sensitivity of 86%, specificity of 97%, and area under the curve of 0.98)15. The PSI values may be more sensitive to the effects of residual anesthetic drugs on the central nervous system than the BIS values3. PSI performed well in predicting the estimated effect site concentrations of propofol (Pk =0.87) and have a significant correlation with the BIS monitor (ρ2 = 0.866, p <0.001)15.

MOAA/S scale or Ramsay Sedation Scale grading is performed subjectively and has to inflict pain to determine responsiveness. So, there are needs in the utility of EEG monitors during procedures with sedative agents for evaluation of patient’s depth of sedation. Because poor correlation between RSS and PSI was revealed in previous literature, we used the MOAA/S scale for our study12. MOAA/S scale (Table 3), a conventional sedation scale has been widely used for the monitoring of depth of sedation and is frequently used at our institution16.

This study had some limitations. First, we had no way of grading and ameliorating the effect of patient’s preoperative anxiety because anxiety can influence EEG activity17. There is a possibility of contamination of the PSI index from the electromyography (EMG) signal due to frequent eye opening in anxious patients. Second, we did not evaluate the response of PSI was stopped after the end of the operation. Third, the PSI values corresponding to poor signal quality combined with elevated EMG (> 50%) was excluded because of possible artifact signal pollution. The confusing data created by EMG interference makes it difficult to use PSI as a guide for sedation12.Further studies about EMG interference for SEDLine™ monitor may be needed when external stimuli are applied.

In our study, the PSI value is reliable for the assessment of the MOAA/S scale level during infusion of propofol. The SEDLine™ monitor may be useful to provide a measure of sedation depth without the need to inflict the patients.

Authors declare no conflict of interest. There was no funding.

The statistical analysis was supported by Clinical Trial Center, Inje University Busan Paik Hospital. This study was presented as an e-poster presentation at Australian and New Zealand College of Anaesthetists and Faculty of Pain Medicine ASM 2014, May 5-9, 2014, the Sands convention center, Singapore.