Background: Diagnosis of membranoproliferative glomerulonephritis (MPGN) is based on kidney biopsy findings: unique glomerular injury pattern and characteristic changes on light, electron microscopy and immunohistochemical analysis. The purpose of this study was to identify possible etiology and incidence of glomerular injury among patients with a diagnosed MPGN. Materials and Methods: A retrospective analysis (years 2000-2014) of 81 clinical cases with a diagnosis of MPGN based on biopsy results was performed. Records were examined, and data about viral, bacterial infections, autoimmune and hematological diseases was collected. Test results of blood C3 and C4 factors of the complement system, and results of kidney biopsy immunohistochemical analysis were investigated. Statistical analysis was performed using Statistical Package for the Social Sciences and p-value less than 0.05 was considered statistically significant. Results: Study population consisted of 55 males (67.9%) and 26 females (32.1%). The average patients’ age was 48.53 (standard deviation ± 16.67) years. The identified etiology of MPGN was: idiopathic in 26 cases (32.10%), bacterial infections in 20 cases (24.69%), viral hepatitis in 16 cases (19.75%), autoimmune diseases in 11 cases (13.58%), and hematological diseases in eight cases (9.88%). Changes of the concentration of complement component C3 as well as component C4 were found; their concentration was decreased in 26 (32.1%) and 17 (20.99%) patients’ respectively while concentration was within the normal range in 11 (13.58%) and 19 (23.46%) patients respectively. Immunohistochemistry results revealed immunoglobulin (Ig) deposits: C3+/Ig+ was found in 47 (58.02%) cases, C3-/Ig+ was found in 16 (19.75%) cases and in six (7.41%) cases test was not performed. The total number of immunoglobulin positive biopsies (C3+/Ig+ and C3-/Ig+, also called immune-complex mediated MPGN) was 63 (77.78%). Complement-mediated MPGN (C3+/Ig-) was less common and was diagnosed only in seven cases (8.64%). C3-/Ig- was found in five cases (6.17%). Conclusions: The leading cause of MPGN was idiopathic as well as bacterial infections. Complement component C3 concentration was mostly decreased. The incidence of normal and decreased concentration of the complement component C4 was almost equal. Most immunohistochemical deposits in kidney biopsy appeared to be C3/Ig positive, and it was observed in more than half of the cases of each MPGN etiological group. Hippokratia 2015; 19 (4): 314-318.

MPGN clinical classification divides cases of the disease into idiopathic (primary) and secondary types. In case of secondary MPGN the cause of disease could be identified (infections, hematological or autoimmune diseases) while in primary MPGN no such direct etiology is present. Secondary type is more common and is diagnosed by reviewing clinical features, laboratory test results, and renal histopathological injury1-8.

Over the past decades, improved understanding of the pathogenesis of glomerular diseases has led to the progress in MPGN classification based on immunofluorescence microscopy. MPGN may be either immune complex or complement-mediated2-6.

If immunofluorescence staining is negative, chronic thrombotic microangiopathy may be the cause of MPGN3-4.

Even though the incidence of MPGN in Lithuania has decreased in the last decades (from 16.8% in 1994-1999 to 7.5% in 2007-2012), this entity still remains one of the four most common primary glomerulopathies in Lithuania22-25. As the new classification of MPGN based on immunofluorescence findings was proposed only several years ago, there are still very few studies analyzing MPGN data according to this classification. In our study, we present the incidence and clinical data of MPGN according to the new immunofluorescence findings-based classification.

The research was performed with the approval of Vilnius Regional Biomedical Research Ethics Committee (Nr. 158200-14-744-261). We retrospectively analyzed 81 clinical cases with renal biopsies performed from 2000 to 2014 in the Nephrology Department of Vilnius University Hospital Santariskiu Klinikos. Biopsies were evaluated at the National Center of Pathology, where the diagnosis of MPGN was confirmed according to histological and immunofluorescence findings. Data regarding the incidence of viral infections, probable acute or persistent bacterial infections, autoimmune diseases and hematological diseases were collected. Test results of C3 and C4 factors of the complement system, results of kidney biopsy immunohistochemistry were also thoroughly investigated. Statistical analysis was performed using Statistical Package for the Social Sciences(SPSS) version 20.0 software (IBM, Armonk, New York, USA), Student‘s t-test was used for continuous variables and the chi-square test was used for the categorical data. A p-value less than 0.05 was considered significant.

The analysis of clinical features and laboratory data showed that the most common type of MPGN appeared to be idiopathic which was present in 26 cases (32.10%). Twenty cases (24.69%) were caused by various bacterial infections: the most frequent of them was tonsillitis (n =6, 7.79%), followed by pneumonia (n =4, 5.19%), tuberculosis and skin infections (n =3, 3.90% in each group). Less common bacterial infections were dental infection and endocarditis that appeared each in the same number of cases (n =2, 2.60%). Viral infections manifested as viral hepatitis (n =16, 19.75%); hepatitis B (HBV) and hepatitis C (HCV) serology was positive in eight patients (9.88%) each. Autoimmune diseases were associated with MPGN in 11 cases (13.58%); eight (9.88%) of which were due to systemic lupus erythematosus (SLE) while the diagnosis of three cases (3.70%) was less specific and it was summarized as systemic vasculitis. Hematological malignancies were found in eight cases (9.88%), B-cell and T-cell lymphomas were generally diagnosed in three cases (3.70%), myelodysplastic syndrome occurred in two cases (2.47%), and multiple myeloma, hemolytic uremic syndrome and monoclonal gammopathy presented in one case (1.23%) each. All this data is summarized in Figure 1. 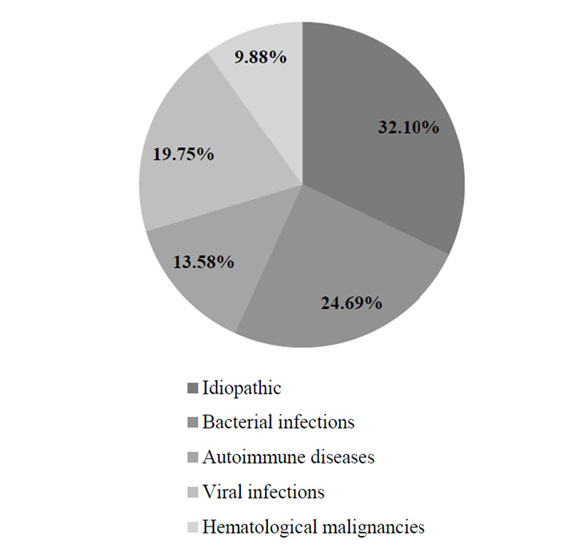 Figure 1: Main etiological causes of membranoproliferative, glomerulonephritis in the 81 clinical cases with renal, biopsies performed from 2000 to 2014; the most common type appeared to be idiopathic and due to bacterial infections. 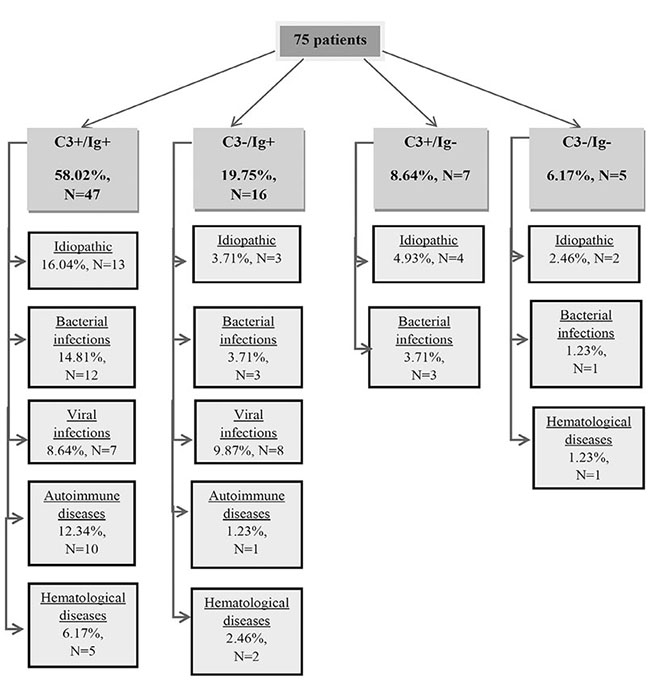 C3/Ig positive immunohistochemical results manifested in more than half of each MPGN etiological group. Relatively the most frequent incidence of C3 and Ig deposition in glomeruli was found in the group of autoimmune diseases, in 90.90% of cases (n =10). In the patients with hematological diseases and in the group of bacterial infections these positive immunohistochemical results appeared in 62.50% (n =5) and 60% (n =12) of cases respectively.

Complement-mediated MPGN C3+/Ig- findings were less common and were diagnosed in seven patients (8.64%). The remaining five cases (6.17%) were C3-/Ig-.

The comparison of MPGN types in male and female groups did not revealed any significant difference.

Patients were divided into three groups according to their age: patients aged 19-40 years were included in the young patient group, 41-60 years in the middle-aged group, and 61-83 years in the elderly group (Table 1). There were more MPGN caused by autoimmune diseases in the young group (63.64%, n =7) and more malignancy associated MPGN in the group of elderly patients (50%, n =4), the difference between these groups was statistically significant (p =0.004).

The most common type of MPGN appears to be the idiopathic. However, in some cases, this diagnosis could be revised and specified, as the understanding of the disease and the diagnostics improve over time. Current data considers MPGN as a characteristic pattern of glomerular injury but not a diagnosis itself. It is recognized that immunofluorescence findings in MPGN better reflect pathogenesis of the damage comparing to electron microscopy findings. Moreover, a better understanding of etiology and pathogenesis of the disease guides to a more appropriate diagnosis and treatment. Therefore, the diagnosis of real idiopathic MPGN becomes very rare.

In our study, HBV or HCV serology and auto-antibodies or complement factor mutations were not investigated in all patients. Routine dentist examination was missing in some patients. Thus, the diagnosis of idiopathic MPGN in some cases could be due to undiagnosed bacterial, viral infections or autoimmune diseases.

The biopsy findings demonstrated a characteristic pathogenesis of MPGN, which in most cases presented with an antigenemia and deposition of Ig or immune complexes, causing activation of the complement system and, as a result, damage of glomeruli. We found five cases (6.17%) with C3-/Ig-. According to other studies3-4, if immunofluorescence staining is negative, chronic thrombotic microangiopathy may be the cause of MPGN. In our study, only one patient was diagnosed with hemolytic uremic syndrome.

Complement-mediated MPGN C3+/Ig- was diagnosed in seven patients (8.64%). Isolated C3 deposition is characteristic for C3 glomerulopathy. This new disease entity includes rare types of GN, such as DDD and C3GN35. However, electron microscopy was not performed in all cases, so we could not differentiate this type of MPGN in more detail.

Cryoglobulinemia may also occur in MPGN, because of the chronic immune system stimulation, which presents in persistent bacterial or viral infections such as HCV or HBV. Furthermore, hematological malignancies may have the same stimulating effect on patient`s immune system8-15. Some data supports the link between the HCV infection and kidney injury15-21. Cryoglobulinemia has not been tested in all cases in our study. The association between cryoglobulins and MPGN could be analyzed more thoroughly in further prospective studies. However, we found MPGN-type kidney injury in patients with HCV or HBV hepatitis. This finding supports other data about viral infections in MPGN15-21.

The main cause of the MPGN in the study appeared to be idiopathic and due to bacterial infections. In patients with MPGN caused by autoimmune disease, lower complement component C4 concentration was found more often. The most frequent immunohistochemical findings in the kidney biopsy were both C3 and Ig positivity. The most frequent incidence of C3 and Ig deposition in glomeruli was in the group of autoimmune diseases. Ig positive biopsy results (C3+/Ig+ and C3-/Ig+) were diagnosed in 77.78% of cases, and these results could be defined as immune-complex mediated MPGN type. Complement-mediated MPGN C3+/Ig- findings were less common and were diagnosed only in 8.64% of cases.