Background: We evaluated the effects of tobacco smoking on functional outcomes of septoplasty and complication rates.
Methods: In total, 183 patients (127 males, 56 females) who had septum deviations and underwent septoplasties from January 2012 to December 2013 were evaluated. Subjects were divided into three groups: non‑smokers (Group A), light smokers (< 20 cigarettes/day, Group B), and heavy smokers (> 20 cigarettes/day Group C). Nasal Obstruction Symptom Evaluation (NOSE) scoring was used to evaluate the effects of tobacco smoking on septoplasty outcomes. Clinical evaluations were performed preoperatively and at one and six months postoperatively. Complications were evaluated during the clinical examinations.
Results: No significant differences were seen between the preoperative and 1-month postoperative NOSE scores, the 1- and 6-month postoperative NOSE scores, or the preoperative and 6-month postoperative NOSE scores among the groups (p =0.352, 0.737, and 0.344, respectively). The overall complication rate also did not differ among the three groups (p =0.860).
Conclusions: Active smoking status does not affect operation outcomes and does not increase the postoperative complication rate among patients undergoing septoplasty. Although we should advise our patients to stop smoking because of its known harmful effects, smoking may not be a selection criterion for septoplasty. Hippokratia 2015; 19 (3): 219-224.

Thousands of chemicals in tobacco smoke affect ciliary function in the respiratory tract. Previous studies have indicated that cigarette smoking negatively affects ciliary beat frequency, ciliogenesis, and the nasal mucociliary transport rate, and results in soft tissue thickening and an increased number of goblet cells2. Among these chemicals, aldehydes are irritants that damage respiratory defense mechanisms. As an example, acrolein (propenal) is toxic to cilia and weakens the clearance mechanism1.

Septoplasty is one of the most common and earliest-learned surgical procedures in otolaryngology practice. It has been estimated that one-third of the population has some nasal obstruction and 25% of them require a surgical operation3. Previous studies have shown that the surgery results are affected by many different factors. Age-related results have been studied previously. Subjects of younger ages demonstrate better quality of life (QOL) compared to older individuals4. Sedaghat et al claimed that clinical assessment of patients with nasal obstruction and deviated septum was needed after septoplasty5. Consequently, symptom scales and/or QOL questionnaires became more useful methods for postoperative evaluations than objective tests. Several studies have reported septoplasty outcomes, but no prospective study on the relationship between smoking and septoplasty outcomes has been reported in the English-language literature. In this study, we evaluated the effects of smoking on functional outcomes and complication rates in septoplasty.

A prospective study was performed at the department of Otolaryngology of Bakirköy Training and Research Hospital, between January 2012 and December 2013, a 24-month period. The study protocol was approved by the hospital’s ethics committee (No: 2012/16/03). Written informed consent was obtained from each patient.

All patients who were referred to the otolaryngology department with nasal obstruction and were diagnosed to have septal deviation underwent septoplasty and were enrolled in the study. Inclusion criteria were: age ≥ 18 years, presence of septal deviation resulting in chronic nasal obstruction, and the presence of persistent symptoms after at least one month of topical nasal steroid management. Exclusion criteria were: age < 18 years, cessation of smoking, self-reported asthma/allergic rhinitis symptoms, turbinate hypertrophy on physical examination, chronic sinusitis, chronic rhinitis, previous nasal surgery, and septal deviation that needed an additional procedure, such as a rhinoplasty/open technique septoplasty/nasal septal reconstruction or endoscopic sinus surgery. We also excluded patients who were ex-smokers, lost to follow-up, or changed their smoking habits (ceased, increased, or decreased) during the study period.

We used the Nasal Obstruction Symptom Evaluation (NOSE) scoring to evaluate the negative effects of smoking on septoplasty outcomes7. Our clinic nurses obtained the NOSE score for each patient preoperatively and also at one and six months postoperatively (Table 1). All physicians were blinded to patients’ NOSE scores. The patients underwent a complete ENT examination involving nasal endoscopy preoperatively and also at one and six months postoperatively. All patients were additionally evaluated for the following possible complications: hemorrhage, nasal septal hematoma, abscess formation, hyposmia, anosmia, palatal sensory impairment, columellar retraction, oronasal fistula, vestibulitis, nasal synechiae, and nasal septal perforation. Smokers who developed complications had a weekly follow-up. Topical antibiotic ointment was used for mucosal injuries. Systemic antibiotics were stopped when the nasal splint was taken off. Patients who had complications were advised again to quit smoking after the operation. When reporting the complication rates, the 6-month complications were reported as new complication events.

As no previous study had evaluated the effects of smoking on septoplasty outcomes with QOL questionnaires, we used for sample size calculation the closest study available, by Rudmik et al which evaluated the effects of smoking on endoscopic sinus surgery outcomes using the Rhinosinusitis Disability Index (RSDI) and Chronic Sinusitis Survey (CSS)8. When the difference in QOL scores was 15–30%, with α set at 0.05, the probability of type I error at 0.01, and powered at 0.8, a minimum sample size of 60 per group was needed.

For statistical analyses, the Number Cruncher Statistical System software was used (NCSS 2007, Statistical Software, UT, USA). The median values of total power were calculated from the filtered raw data for each of the three groups at each benchmark. Data were evaluated by descriptive statistical methods (mean, standard deviation, median, interquartile range). In addition to the multiple-group repeated-measures Friedman test, comparisons between groups used the Kruskal-Wallis test, subgroup comparisons were performed using Dunn’s multiple comparison test, qualitative comparisons of data were performed using the χ2 test, and qualitative data on recurrence were evaluated with McNemar’s test. Results with a p-value < 0.05 and appropriate 95% confidence intervals (CI) were considered statistically significant.

In total, 183 patients (127 male, 56 female) were enrolled. The study’s CONSORT flow diagram is presented in Table 2. No significant difference in age or gender was observed among the three groups (p =0.147 and p =0.451, respectively). 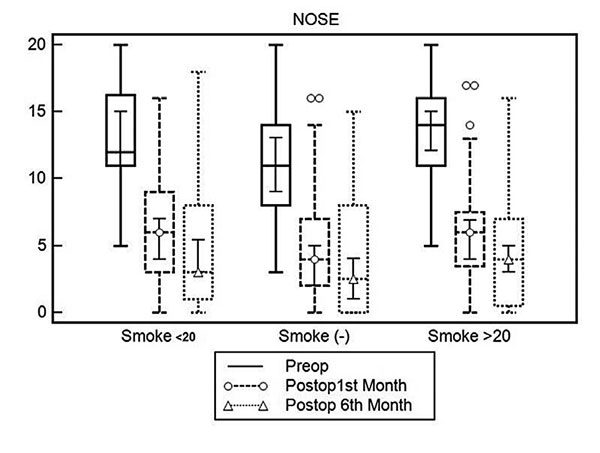 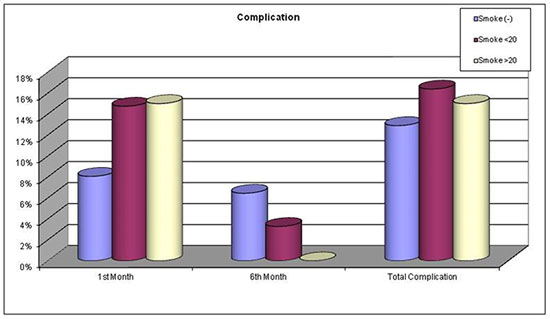 Smoking remains a worldwide public health problem. According to the Global Adult Tobacco Survey Turkey Report (2010) 31.2% of adults (~16 million people) aged ≥ 15 years were smoking in Turkey at that time8. Such a high rate requires us to consider the effects of smoking on the outcomes of upper respiratory system surgery.

We performed this prospective study to evaluate the effects of smoking on septoplasty outcomes. We did not find any significant differences between heavy or light smoking and non-smoking subjects in NOSE scores or complications.

We used the NOSE scale, first proposed by Stewart et al, to study the effects of smoking on septoplasty outcomes7. This scale is rapid, valid, and reliable and used mainly to evaluate nasal obstructions9. Previous studies have demonstrated that this scale correlates well with nasal examinations and computed tomography findings and is useful for the evaluation of septoplasty operations10.

Previous studies have focused mainly on the effects of smoking on the nasal mucosa and its structure and function. A recent study indicated that smoking significantly reduced nasal mucociliary clearance, the number of ciliated cells and goblet cells, ciliary motility, and time of ciliary movement in ciliated cells11. These changes were not permanent. Ex-smokers demonstrated similar properties as non-smokers, suggesting that ex-smokers recovered to normal function.

However, there are few data on the effects of smoking on septoplasty outcomes. Karaman et al. evaluated the effects of smoking on nasal mucociliary clearance (MMC) time with a saccharine test in 60 subjects (20 non-smoking subjects who underwent septoplasty, 20 smoking subjects who underwent septoplasty, and 20 normal subjects without nasal pathology)12. The test was performed one day before surgery and three months after surgery. Compared to the smoking group, both preoperative and postoperative nasal MCC time decreased significantly in the non-smoking group. The increase in MMC time reflects additional harm to the nasal ciliary mucosa from smoking. However, this study did not evaluate functional outcomes. Although an increase in MMC time in the smoking group was demonstrated, it remains unknown whether this increase resulted in functional impairment (e.g. whether this increase resulted in nasal obstruction).

In a more recent study, Hong et al investigated predictive factors that influenced septoplasty outcomes13. Forty-nine subjects were evaluated regarding age, gender, smoking, allergies, and degree of septal deviation. The degree of nasal obstruction was measured with a visual analog scale and NOSE scoring. Nasal volume was measured with acoustic rhinometry. Emotional factors were also assessed using a stress questionnaire and Beck’s depression index (BDI). The results indicated that subjective outcomes were not affected by smoking status. Only baseline NOSE scores were related to subjective improvement.

The effects of smoking on endoscopic sinus surgery have been assessed in previous studies. Rudmik et al .reported that active smoking status (500 non-smokers and 33 smoking subjects, who had similar preoperative Lund-Mackay scores) did not alter postoperative recovery in QOL after endoscopic sinus surgery6. To assess health-related QOL, they used the Rhinosinusitis Disability Index (RSDI) and Chronic Sinusitis Survey (CSS). Smokers and non-smokers both showed similar improvements in endoscopy scores and health-related QOL. However, another study found that cigarette smoking affected the long-term outcomes of endoscopic sinus surgery14. One previous study compared smokers with non-smoking men complaining of snoring and showed that there were no significant differences between smokers and non-smokers with regard to improvements in patient symptoms15.

In a 2012 review, Reh et al reported the results of a literature search on rhinosinusitis and smoking16. In total, 29 papers were reviewed to analyze the impact of smoking on surgical results. They reported that active smoking status was not a contraindication for ESS.

Operative success is difficult to assess because of discrepancies between objective tests, such as acoustic rhinometry, and postoperative QOL assessment/symptom scales. For this reason, some surgeons hesitate to advise patients regarding surgery despite the expected functional benefits. When harmful effects of smoking on the nasal portion of the upper respiratory tract are considered, similar hesitation regarding septoplasty in smoking patients may occur. In the present study, smokers who underwent septoplasty for septum deviation had similar improvements in NOSE scores and complication rates to non-smokers. Smoking status did not significantly affect the complication rates in our study. The most common complications were synechiae and septal perforation (Table 5). Previous reports indicate that synechiae formation is a common complication, detected in 7% of subjects. Septal peroration rates have been reported to be between 1% and 6.7%18.

We were unable to find any study in the English-language literature that evaluated the effects of septoplasty outcomes with a prospective design. The effects of smoking in our study were evaluated as smoking under or over 20 cigarettes per day. However, smoke exposure will be highly variable because of the differences in nicotine contents of cigarettes, the smoking environment, and mainstream versus sidestream smoke. We also advised our patients to quit smoking for its known harmful effects.

According to the current results, active smoking status does not affect septoplasty outcomes and does not increase postoperative complication rates. Thus, it may not be a patient selection criterion for septoplasty.

Authors report no conflicts of interest.

We would like to thank Rana Konyalıoğlu, ART Statistical Consultancy, Istanbul, Turkey, for performing the statistical analysis.