Background: Liver regeneration is vital for the survival of patients submitted to extensive liver resection as a treatment of hepatocellular carcinoma (HCC). Sorafenib is a multikinase inhibitor of angiogenesis and cell division, both of which are integral components of liver regeneration.We investigated the effect of preoperative treatment with sorafenib, a drug used for the treatment of HCC, on liver regeneration and angiogenesis in healthy rats, after two-thirds partial hepatectomy (PH2/3).
Methods: In total 48 Wistar rats received intragastric injections of sorafenib (30 mg/kg/d) or vehicle, underwent PH2/3, and were sacrificed at 48, 96 or 168 hours after that. The regenerative index of the liver remnant was studied, as well as the mitotic index. DNA synthesis and angiogenesis were estimated by immunohistochemistry for the Ki-67 and CD34 antigens, respectively.
Results: Sorafenib reduced significantly the regenerative index at all time points but not the mitotic index at 48, 96 or 168 hours. Deoxyribonucleic acid (DNA) synthesis and angiogenesis were not affected significantly either.
Conclusions: Sorafenib, when administered preoperatively, reduces incompletely and transiently the regeneration of the liver after PH2/3 in rats. This could mean that sorafenib can be used as neoadjuvant treatment of patients with HCC prior to liver resection, but further experimental and clinical studies are needed to establish the safety of this treatment. Hippokratia 2015; 19 (3): 249-255.

Liver has the unique ability to regenerate and thereby restore its original mass after tissue loss1. This regenerative capacity of the liver is considered to be vital for the survival of patients submitted to extensive liver resection for the treatment of malignant liver tumors. Hepatocellular carcinoma (HCC) is the most common primary malignant tumor of the liver, the fifth most common type of cancer worldwide, and the third cause of cancer mortality2,3. Treatment options for HCC are generally selected taking into account the tumor stage, liver function and patient performance status and include liver transplantation, liver resection, ablation, chemoembolization and systemic chemotherapy4. Liver transplantation and liver resection are considered as potentially curative treatments and are the standard of care for patients with early-stage HCC4. Patients with advanced HCC and Child–Pugh A liver disease, treatment with sorafenib, an orally active multikinase inhibitor with antiangiogenic and antiproliferative properties, resulted in a survival extension5. Additionally there is an increasing number of reports of patients with HCC treated with sorafenib, as neoadjuvant or adjuvant therapy before or after liver resection6. Therefore, the effect of sorafenib on liver regeneration could be crucial for the survival of these patients.

Sorafenib is an inhibitor of serine/threonine kinases as well as the tyrosine kinases of vascular endothelial growth factor receptor-2,-3 (VEGFR-2, VEGFR-3), platelet-derived growth factor receptor (PDGFR), FMS-related tyrosine kinase-3 (FLT-3), Proto-oncogene-tyrosine-protein-kinase-receptor RET, and proto-oncogene c-Kit7,8. The molecular pathways inhibited by sorafenib augment angiogenesis and cell division, both of which are integral components of liver regeneration1. This inhibition of vital processes by sorafenib could impair regeneration. The aim of the present study was to investigate how the preoperative treatment with sorafenib influences liver regeneration and angiogenesis in healthy rats, after two-thirds partial hepatectomy (PH2/3).

In total 48 specified pathogen free, adult, male Wistar rats, weighing 200–250g were obtained from the Department of Physiology, of the Veterinary Medicine School, of Aristotle University of Thessaloniki, Greece, and were housed in a 12-hour light-dark cycle where temperature, humidity and ventilation were controlled as per international standards. They were fed with standard pellet chow and water ad libitum. All animals were acclimated for two weeks prior to experimentation. This study was approved by the local committee for Care and Use of Laboratory Animals (Ref.No. 13/14276 (09/13/09) Veterinary Department of Perception, Medicines and Applications, Veterinary Division, Prefecture of Thessaloniki, Greece). All operations and postoperative care of animals were performed in the Division of Surgery, Companion Animal Clinic, School of Veterinary Medicine of the Aristotle University of Thessaloniki.

All animals were operated under inhalation anesthesia. Induction to anesthesia was performed in a plastic cylinder with isoflurane 4% concentration and maintenance to anesthesia was achieved with nasal mask with isoflurane 2% concentration. PH2/3 was performed as described by Higgins and Anderson9. A bilateral subcostal incision was performed and the median and left liver lobes were mobilized, ligated and excised. The abdominal wall was closed using a continuous absorbable suture and the skin with interrupted non-absorbable sutures. The excised liver lobes were weighed on an electronic scale. On reoperation, the previous surgical incision was opened, and the aorta was cannulated so as the animals were exsanguinated to death. Finally, the remaining hepatic attachments were divided, and the liver remnant was removed and weighed.

The rate of regeneration of the liver following hepatectomy was calculated according to the Kwon’s formula10 from the expression:

D: liver weight per 100g of body weight, on the day they were sacrificed

Liver tissue samples from the caudate lobe were obtained at the time of death. They were formalin-fixed and paraffin-embedded, then cut into 4 μm-thick sections and Hematoxylin and eosin stained. Hepatocyte proliferative activity was estimated by counting the mitosing hepatocytes in 50 consecutive high power fields (HPF: x400). Cells in prophase before the dissolution of nuclear membranes and late telophase were excluded.

The MVD was assessed using CD34 staining. Five areas of the most intensive neovascularization were selected at x40 magnification throughout all the sections. Microvessels of these areas were counted at x200 magnification. The MVD was evaluated based on the recommendation of Gasparini and Harris11. Any brown-stained endothelial cell or endothelial cell cluster clearly separated from neighboring microvessels, hepatocytes and connective elements were considered to be countable microvessels.

Statistical analysis was carried out using Statistical Package for the Social Sciences (SPSS) for Windows version 17.0 (SPSS Inc. Chicago, USA). All values were expressed as means ± standard deviation (SD). The statistical significance was determined either by the student two-tailed t-test (parametric values) or Mann–Whitney U test (nonparametric values) and p <0.05 was considered to be significant. 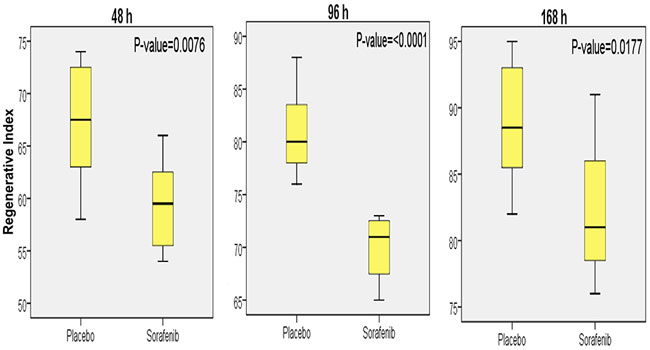 Figure 1: Mean regenerative rate ± standard deviation, and statistical analysis for the groups of animals that received either sorafenib or placebo (vehicle) and were sacrificed at 48, 96, or 168 hours after two-thirds partial hepatectomy (PH2/3).

Light microscopy of tissue specimens from all groups revealed the characteristic changes of liver regeneration such as hepatocyte swelling, microvesicular steatosis, dividing nuclei, visible nucleoli and bi-columnar hepatocyte sheets. These changes were more prominent in the animals that received only the vehicle (Figure 2). 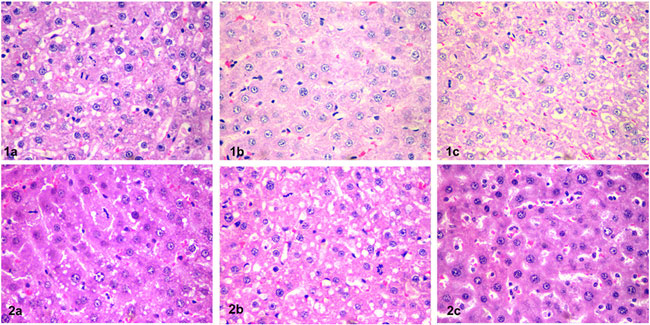 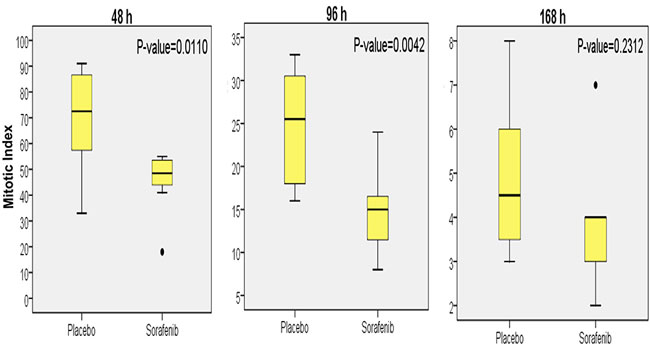 Figure 3: Mean mitotic index ± standard deviation, and statistical analysis for the groups of animals that received either sorafenib or placebo (vehicle) and were sacrificed at 48, 96, or 168 hours after two-thirds partial hepatectomy (PH2/3). 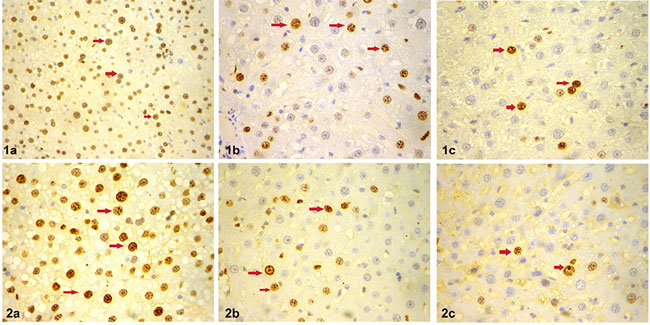 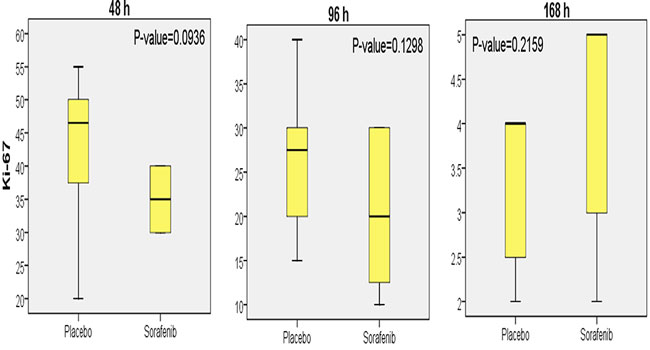 Figure 5: Mean Ki-67 labelling index ± standard deviation, and statistical analysis for the groups of animals that received either sorafenib or placebo (vehicle) and were sacrificed at 48, 96, or 168 hours.

Liver angiogenesis during regeneration is characterised by changes in the phenotype of sinusoidal endothelial cells, which assume the features of capillary endothelial cells. This process known as sinusoidal capillarization (SC) can be routinely assessed by CD34 immunostaining, resulting negative in normal liver sinusoids and positive in the capillarised ones14. 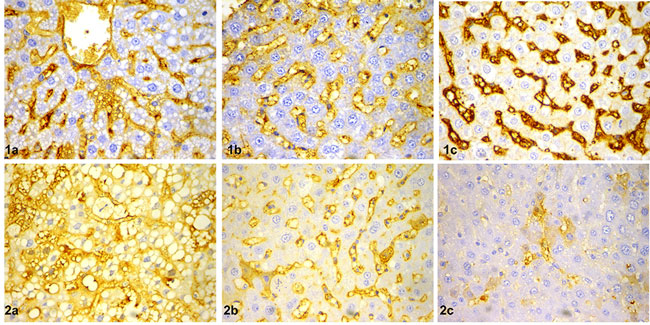 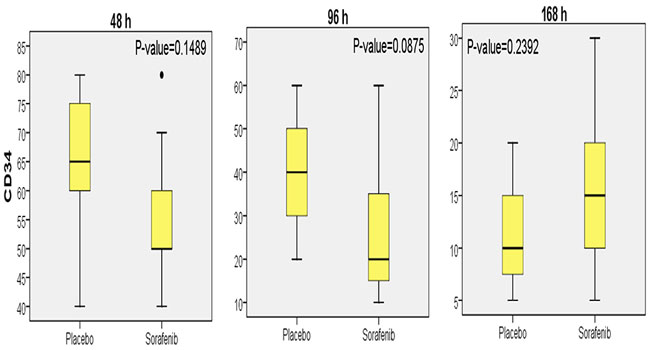 Figure 7: Mean CD34 labelling index ± standard deviation, and statistical analysis for the groups of animals that received either sorafenib or placebo (vehicle) and were sacrificed at 48, 96, or 168 hours.

The effect of sorafenib on liver regeneration has been previously studied with conflicting results. Hora et al15 demonstrated an inhibitory effect on liver regeneration in mice receiving sorafenib after PH2/3; while no effect was seen if the treatment was stopped one day before surgery. In contrast, Kurniali et al16 assessed cell proliferation by flow cytometry on isolated liver cells from perfused livers stained with anti-bromodeoxyuridine and antiKi-67; in sorafenib-treated mice at 48, 96, or 360 hours after PH. They found no inhibiting effect on liver weight, DNA synthesis, or cellular proliferation if sorafenib was given after liver resection. More recently, Andersen et al17 reported that the pre and postoperative administration of 15 mg/Kgr/day of sorafenib to rats after PH was associated with a significant impairment of liver weight gain, regeneration rates and hepatocyte proliferation. Also, Mollbrink et al18 studied the effect of sorafenib up to 14 days after PH in rats and reported a prolongation of liver regeneration characterized by an initial reduction and then by recovery of the regenerative and labelling indices with bromodeoxyuridine and Ki-67.

The major finding of this study is that sorafenib when administered at a dose of 30 mg/Kg/day preoperatively, reduces incompletely and transiently the regeneration of the liver after PH2/3. More specifically, sorafenib significantly reduces the restoration of the liver remnant at 48, 96, and 168 hours after PH2/3. This inhibitory effect is also found in the mitotic index but only at 48 and 96 hours and not at 168 hours after PH. DNA synthesis as assessed with the Ki-67 labelling index was not considerably reduced at 48, 96, and 168 hours after PH2/3. Similarly, sorafenib did not reduce the neoangiogenesis of liver regeneration as assessed by the CD34 labelling index, at any time-point after PH2/3.

Liver regeneration is a complex process, which depends on the activation of several complementary growth signal pathways. The RAS/RAF/mitogen-activated protein kinase (MAPK)/extracellular signal-regulated kinase (ERK) pathway, is activated during liver regeneration and in turn activates ERK1/219. Growth factors such as hepatocyte growth factor (HGF), endothelial growth factor (EGF), transforming growth factor-α (TGF-α) and different cytokines including interleukin-6 and tumor necrosis factor alpha (TNF-α), augment ERK1/2 activation20. Sorafenib inhibits the serine/threonine kinase activity of RAF in the RAF/MEK/ERK signalling pathway and the receptor tyrosine kinase activity of the VEGFR-28,21. The significance of ERK1/2 activation in hepatocyte proliferation is supported by previous reports22 while disputed by others23. More recently, in conditional Met-mutant mice only mild effects on liver regeneration after hepatectomy were found, despite low ERK1/2 levels24. Additionally, there are other signal transduction pathways involved in the activation of liver regeneration, such as c-Jun N-terminal protein kinases (JNK1/2), p38 mitogen-activated protein kinases and the phosphoinositide-3 kinase (PI3-kinase)23,25. This data suggests a redundancy of the activation mechanisms rather than exclusive roles of selected pathways and could explain the findings of our study that sorafenib reduces incompletely and transiently hepatocyte proliferation PH2/3.

Our finding that sorafenib, when administered at a dose of 30 mg/Kg preoperatively, reduces incompletely and transiently the regeneration and angiogenesis of the liver after PH2/3 cannot be translated into the clinical setting. In humans, such incomplete and transient inhibition could become dangerous. In a clinical setting, sorafenib could be used as a neoadjuvant treatment for an extended time period before resection or transplantation, which may compromise liver mass restoration to a higher degree than demonstrated in the present study; in which sorafenib was given for only two weeks before surgery.

Sorafenib is the only FDA-approved systemic chemotherapeutic agent for the treatment of advanced HCC at this time31. It appears to be safe if given after liver transplantation to prevent tumor recurrence32. Patients with HCC exceeding Milan criteria may benefit if treated with sorafenib as it delays tumor recurrence after liver transplantation and prolongs survival33. There are further ongoing Phase 2 clinical trials studying the safety and efficacy of the treatment34. However, when administered before transplantation, it was reported to increase the risk of postoperative biliary complications35. The clinical experience of treatment with sorafenib in patients with HCC, as neoadjuvant or adjuvant therapy before or after liver resection, is very limited. There are reports stating that sorafenib can downstage HCC, presenting a bridge to surgical treatment6, without compromising patients’ safety36.

In conclusion, our study shows that sorafenib reduces incompletely and transiently the regeneration and angiogenesis of the liver after PH2/3 in rats. This could mean that sorafenib can be used as neoadjuvant treatment in patients with HCC prior to liver resection. Nevertheless, to recommend such treatment as widespread application, further experimental and clinical studies with randomized trials have to verify their safety and determine their efficacy.