Background: Apelin has various effects on a lot of systems such as central nervous system and cardiovascular system. This study investigated the possible analgesic effects of apelin-13 using the hot-plate and the tail-flick thermal analgesia tests in rats. We also evaluated the mechanism underlying the analgesic effects of apelin-13 by pretreating with Nw-nitro-L-arginine methyl ester (L-NAME) or ondansetron. Material & Methods: Forty male rats were used. The rats were randomly assigned to five groups according to the treatment received: Group I: Control; Group II: Morphine; Group III: Apelin-13; Group IV: Apelin-13+L-NAME; Group V: Apelin-13+Ondansetron. Acute thermal pain was modeled using the hot-plate and the tail-flick tests. Results: During the hot-plate test, i.p. Morphine and apelin-13 administered at zero- and 30 min produced significantly greater analgesic effects compared to the control. When the nitric oxide pathway was inhibited by administration of L-NAME with apelin-13, the analgesic effect continued. When apelin-13 and ondansetron were co-administered, the analgesic effect of apelin-13 disappeared at zero- and 30 min. During the tail-flick test, at 30 min, significantly higher levels of analgesia were observed in both the morphine and apelin group (which did not differ from each other) compared to the control group. L-NAME co-administered with apelin-13 did not affect the degree of analgesia, but apelin-13 co-administered with ondansetron was associated with a greater reduction in analgesia compared to the other groups. Conclusion: Our results demonstrate that apelin-13 exerts an analgesic effect; co-administration of apelin-13 and ondansetron inhibits antinociception, an effect apparently mediated by five-hydroxytryptamine-three (5-HT3) receptors. Hippokratia 2015; 19 (4): 319-323.

Apelin is a preproprotein comprised of 77 amino acids (aa) that is synthesized by the APLN gene in humans1. After translocation into the endoplasmic reticulum, it is fragmented into different signal peptides. Recently, Mesmin et al2 reported that apelin-13 is a peptide consisting of 13 aa. The receptor of apelin is expressed in the cardiovascular system, gastrointestinal tract, lung, brain, and mammary gland among other regions3. It induces thirst, plays a role in the control of water and food intake4,5 and reduces acid secretion from the stomach into the digestive tract6 and the release of insulin from the pancreas7. Apelin also stimulates cardiac contraction and exerts inotropic effects8, which are important for the central mediation of blood pressure9, and it is also involved in the upregulation of vessel formation10.

Prevention of tianeptine-induced antinociception by pretreatment with parachlorophenylalanine (pCPA), a five-hydroxytryptamine (5-HT) inhibitory agent, suggests that increased serotonergic activity may be responsible for its analgesic effect12.Previous investigations support a role for the 5-HT3 receptor in the modulation of analgesia13.Therefore, we hypothesized that pharmacological interference with the biosynthesis of the 5-HT3 receptor might be reflected in changes in the nociceptive activity of apelin-13.

Nitric oxide (NO) is strongly associated with the activity of nociceptive pathways and NO synthesis inhibition relieves hyperalgesia in models of both acute and neuropathic pain14. Nw-nitro-L-arginine methyl ester (L-NAME) is an inhibitor of NO synthase widely used to reduce NO levels in rats15. Therefore, we also evaluated the mechanism underlying the possible antinociceptive effects of apelin-13 by pretreating with L-NAME.

In accordance with the above reports, apelin-13 may also exhibit antinociceptive activity. However, the mechanisms underlying its effects remain to be fully elucidated; it is not certain whether they are mediated by NO or serotonin. This study investigated the possible analgesic effects of apelin-13 using the hot-plate and tail-flick thermal analgesia tests in rats. We also evaluated the mechanism underlying the analgesic effect of apelin-13 by pretreating with L-NAME or ondansetron (a serotonin 5-HT3 receptor blocker).

This study was approved by the Animals Ethics Committee of Inonu University, Malatya, Turkey (Acceptance number: 2012 A-47).

Acute thermal pain was modeled using the hot-plate and tail-flick tests, both of which assess thermal analgesia in rodents.

a) Experimental procedures during the hot-plate test

This test was applied according to Eddy et al18 methods.Briefly, the surface of a hot-plate (Columbus Instruments, Columbus, Ohio, USA) was heated to 50 ± 0.5°C, with the temperature maintained using a built-in digital thermometer. The time (in seconds) between placement of rats on the plate and the onset of shaking, paw licking, and jumping off the plate denoted response latency. To avoid the tissue damage, a cut-off time of 60 sec was applied, after which the rats were returned to the cage, regardless of whether a response was observed. Mean reaction times zero and 30 min before the drug administration were used as baselines, defined as the normal reaction of animals to a temperature stimulus. Response latency in the hot-plate test was measured zero, 30, 60, and 120 min after the drug injection. We did not measured any further nociceptive thresholds until full recovery from the effects of general anesthetic.

b) Experimental procedures during the tail-flick test

We assessed antinociception and thermal analgesia using the radiant heat tail-flick test apparatus (Type 812; Columbus Instruments, Columbus, Ohio, USA) as described previously19. Briefly, the rats were placed in transparent, hard plastic tubes, with tests repeated three times (with 15-sec intervals between each test) at each time point. Mean tail-flick latency measurements obtained during three pre-drug trials indicated individual baseline latency; only those animals exhibiting tail-flick latencies between two-five sec before treatment were used in the experiments. Immediately after baseline assessment, drug or saline was injected according to the study protocol. Responses were measured zero, 30, 60, and 120 min after drug treatment by applying pressure from the analgesiometer to the tail (1 cm from the tip of the tail). The cut-off time was set at 10 sec to avoid tissue damage. The timing of injections was adjusted to accord with those used in previous rodent models20.

The sample size required to detect even minor effects was identified using statistical power analysis. The sample size necessary to achieve a power of 0.80 was estimated using the NCSS software package (NCSS, Kaysville, UT, USA). Data were analyzed using the Statistical Package for the Social Sciences (SPSS) for Windows (version 15.0; SPSS Inc., Chicago, IL, USA). Descriptive statistics are presented as median values (min-max). The normality of distribution was assessed using the Kolmogorov-Smirnov method. Kruskal-Wallis and Wilcoxon signed-rank tests were used for inter-group comparisons. When the Kruskal-Wallis test statistic was significant, multiple comparisons were made using the Mann-Whitney test with Bonferroni correction. A value of p <0.05 was considered statistically significant. 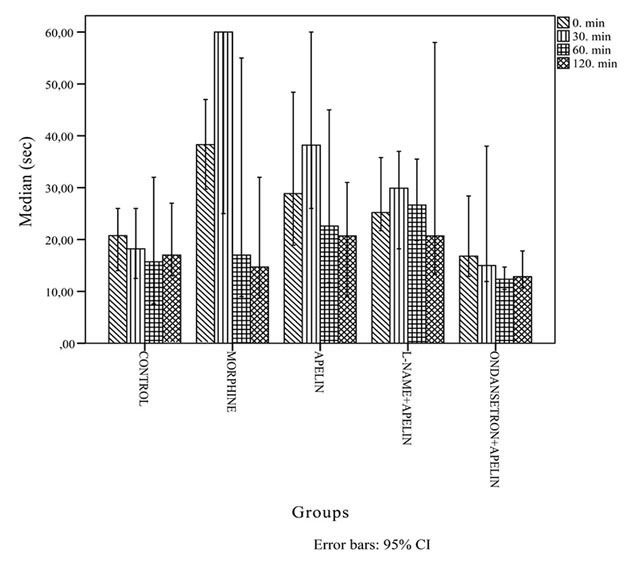 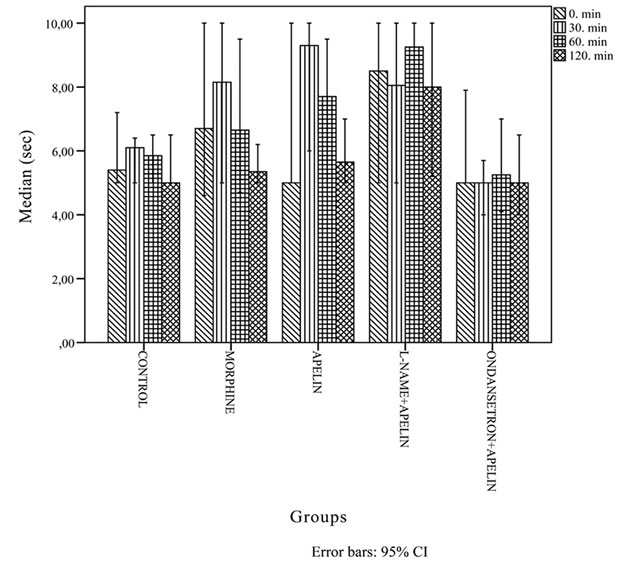 During the tail-flick test, medications administered at 0 min conferred no additional analgesic effects compared to control. With respect to the 100% bioavailability principle, parenteral drug administration typically exerts effects at zero min. Therefore, even though an agent is present in the body at zero min, the onset of drug action in central pathways commences after zero min. At 30 min, we observed significantly higher levels of analgesia in both the morphine and apelin group (which did not differ from each other) compared to the control group. L-NAME co-administered with apelin-13 did not affect the degree of analgesia, but apelin-13 co-administered with ondansetron was associated with a greater reduction in analgesia compared to the other groups. At 60 min the central analgesic effects of morphine disappeared, but those of apelin-13 persisted to a greater degree compared to control. In the L-NAME with apelin-13 group, analgesic effects began at 60 min and persisted until 120 min to a significantly greater degree compared to the control group. Compared to the control and apelin-13 groups, we observed a significantly greater hyperalgesic response at 30 min, which disappeared at 60 min, in the group co-administered apelin-13 and ondansetron. No difference was observed in analgesia among all groups at 120 min. During the tail-flick test, the analgesic effects of apelin-13 decreased after 60 min. Overall, our tail-flick and hot-plate test results were similar.

Our main finding was that apelin-13 treatment was associated with greater analgesic efficacy in both the hot-plate and tail-flick tests. Treatment with morphine was associated with a marked increase in response latency; morphine exerts its antinociceptive effects through opioid receptor-mediated mechanisms at doses that do not affect motor activity. Contrary to our expectations, there was no difference in the analgesic efficacy of morphine and apelin-13 during the hot-plate and tail-flick tests but analgesia duration was longer with apelin-13.

A second important finding was that apelin-13+ondansetron-injected rats exhibited decreased response latencies compared to morphine and control rats, whereas apelin-13+L-NAME treatment was not associated with differences in response latency, except at 60 min when compared to the apelin-13-only-treated rats in both the hot-plate and tail-flick tests. The attenuation of apelin-13-induced antinociception following ondansetron pretreatment observed herein suggests that increased serotonergic activity may be responsible for its analgesic effect rather than NO.

Apelin is an endogenous ligand that binds to G protein-coupled APJ receptors4. The apelinergic system is distributed extensively over both the peripheral and central nervous systems11. The effects of apelin in numerous systems have been described previously2, and include vasodilation and blood pressure lowering through the NO pathway21,22. In our study, apelin-13 exerted analgesic effects through the serotonin pathway, which accords with a study by Xu et al11 in which apelin activated the μ opioid receptor to produce analgesia. In another study, intrathecally administered apelin-13 induced hyperalgesia during the formalin test (tonic inflammatory pain model), but induced antinociceptive effects in an acute pain tail-flick model23. In mice, Canpolat et al24 more recently has reported that 100 mg/kg apelin-13 administration caused significant decreases in pain threshold in plantar analgesia meter.

The NO synthase inhibitor L-NAME reduces behavioral signs of mechanical allodynia and cold allodynia during the cold-stress test25. We demonstrated herein that co-administration of the NO synthesis inhibitor L-NAME and apelin-13 did not enhance analgesia; the NO pathway does not appear to contribute to the analgesic effects of apelin.

Serotonin is known to be involved in analgesic pathways. Recently, Loyd et al13 reported that serotonin increases the thermal hyperalgesia induced by transient receptor potential V1 (TRPV1), and is reduced by local pretreatment with serotonin receptor antagonists such as ketanserin and granisetron. Furthermore, the analgesic effects of tramadol, an opioid analgesic, are reduced by the antiemetic drug ondansetron, a potent and selective antagonist of the 5-HT3 receptor26. In the present study, during evaluation of the mechanisms underlying the analgesic effects of apelin, we also determined that co-administration of apelin-13 and ondansetron decreases the analgesic activity of apelin.

Although central and peripheral analgesics reduce the number of contractions in response to painful chemical stimuli, only central analgesics increase response latency in the hot-plate test, a specific central antinociceptive test in which opioid agents exert their analgesic effects via supraspinal and spinal receptors27. Therefore, we used morphine and the hot-plate test to assess central antinociception. In our study, the results of tail-flick test indicated that apelin-13 exerted analgesic effects through its effects on the serotonin pathway.

In conclusion, our results demonstrate that apelin-13 exerts an analgesic effect; co-administration of apelin-13 and ondansetron inhibits antinociception, an effect apparently mediated by 5-HT3 receptors.

We acknowledge the support of TUBITAK (The Scientific and Technological Research Council of Turkey) under grant 2209, Student Project.