Background: Serous adenocarcinoma is the most common subtype of ovarian carcinoma, while ovarian echinococcosis is a rare disease of the female genital system. The simultaneous presence of adenocarcinoma and echinococcosis in the same ovary is extremely rare and little data exist regarding diagnosis and treatment approach.

Materials and Methods: In the present paper, we report a rare case of a 66-year-old Greek Caucasian woman of rural origin, with an adnexal mass, ascitic and pleural fluid. The patient underwent exploratory laparotomy following neoadjuvant chemotherapy, based on positive for malignancy pleural and ascitic fluid cytology results.

Results: Histological examination of the surgical specimen indicated the synchronous presence of echinococcosis and adenocarcinoma in the same ovary.

Conclusions: Ovarian hydatid cyst is extremely rare, but should be suspected in patients with echinococcosis in other organs and those coming from endemic areas. Moreover, the disease could mimic ovarian cancer, as there are no specific symptoms and clinical signs. The coexistence of these two diseases in the same ovary, although rare, is possible. It seems that the presence of the hydatid cyst does not change the treatment approach of the malignancy so that surgery with neoadjuvant or adjuvant chemotherapy, according to the present guidelines, should be administered. Hippokratia 2015, 19 (1): 88-91.

Echinococcosis is an infectious disease affecting mainly liver and lung5,6. It is a cyclozoonosis caused by a parasite called echinococcus taenia, which is a cestode, helminth tapeworm5,7-9. Echinococcus granulosus and echinococcus alveolaris are the harmful types for human7. The former causes the most common type of echinococcosis, which is characterized by a big monolocular cyst named hydatid cyst. Rupture of the cyst leads to the development of new cysts and secondary dispersion of the disease8.

Herein, we describe a rare case of synchronous echinococcosis and adenocarcinoma in the same ovary.

A 66-year-old Greek Caucasian woman of rural origin, para 2, gravid 4, was referred from a district regional hospital to the gynecologic oncology department of Theagenio Cancer hospital, for further evaluation, due to the presence of a 10 x 12 x 12 cm, palpable, cystic mass found in the anatomical region of the left ovary. Her obstetrical and gynecological history included menarche at the age of thirteen and menopause in her fifties. The menstrual cycle was reported to have been normal, every 28-30 days, lasting for 4-5 days. There was no family history of malignancies. She reported having undergone surgery for echinococcosis of the right liver lobe and of the left lung, before five and three years respectively. There was no evidence of echinococcosis recurrence during her follow-up.

The patient presented with fever, abdominal pain and discomfort. Clinical examination showed a palpable mass at the anatomical site of the left ovary. Transvaginal ultrasound scan was not satisfactory due to the large size of the tumor, while abdominal ultrasound revealed the presence of a 12 cm diameter cystic mass with echogenic elements localized in the anatomical site of the left ovary. Thoracic radiography displayed pleural effusion in the left hemithorax while abdominal computed tomography (CT) scan indicated ascitic fluid. Tumor markers CA 125 and CA 15-3 were significantly elevated (946 IU/ml and 61 IU/mL respectively). Pleural fluid, as well as ascitic fluid obtained from diagnostic paracentesis, was centrifuged and the clot of cells was processed using Liquid Based Cytology (The Thin prep – pap test, Cytyc Corp., Marborough, Massachusetts, USA). Furthermore, Pap stain was carried out and the slides were evaluated using light-microscopy. Both pleural and ascitic fluid cytology indicated many malignant cells arranged mainly in papillary-like aggregates. Neoplastic cells were characterized by increased nuclear/cytoplasmic ratio and vacuolated cytoplasm. Additionally, immunocytochemical staining was positive for cytokeratin 7, Ca 125, Glut-1 and EMA.

Symptomatic treatment was quite effective by administering paracetamol and non-steroid anti-inflammatory medicines until imaging and laboratory studies were completed. A possible malignant tumor, arising from the left ovary was considered, based on the ultrasound findings, peritoneal and pleural fluid cytology results and tumor markers values. Thus, the patient underwent six cycles of neoadjuvant chemotherapy with carboplatin and paclitaxel1-3,10. Even though Ca 125 decreased and the ascitic fluid had radiologically disappeared, indicating response to chemotherapy, there was no evident tumor reduction on CT scan. An exploratory laparotomy and staging surgery followed1-3,10. During the operation a 10 x 12 x 12 cm white, smooth and soft cystic tumor was found (Figure 1, Figure 2). The tumor was tightly adherent to the small intestine and omentum. Adhesiolysis and successful surgical excision of the cystic tumor, without intraoperative rupture, were performed. Frozen sections of the cyst’s wall and cytological examination of the cyst’s fluid showed the cyst to be a hydatid cyst with no indication of malignancy in either the specimen or in the cyst’s fluid. However, due to patient’s age and especially due to the preoperative diagnosis which was based on the cytology results and considering the values of tumor markers, total hysterectomy with bilateral salpingoophorectomy was performed. No obvious macroscopic metastasis was found during the operation. Due to unexpected intraoperative hypertension and hemorrhage, the surgeons decided not to proceed to omentectomy for staging of the disease in order to reduce the duration of the operation. 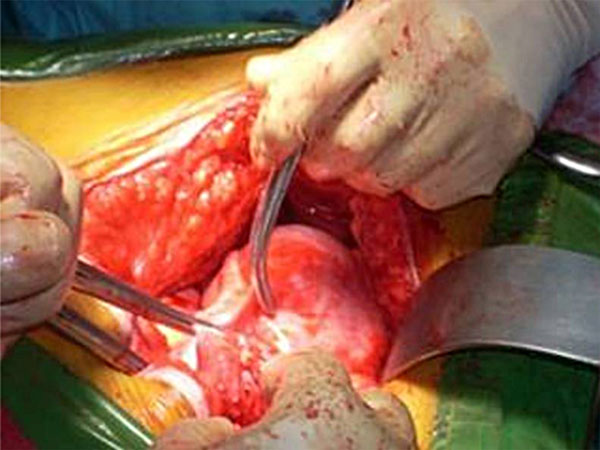 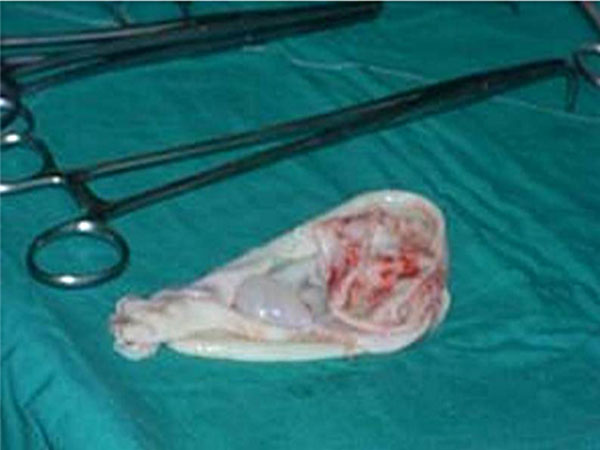 Figure 2. Surgical speciment of the cyst of the left ovary consisting of the synchronous echinococcossis and the adenocarcinoma.

Formalin fixed, paraffin embedded tissue sections from the entire specimen confirmed the presence of hydatid cyst in the left ovary, which consisted of an avascular, eosinophilic, chitinous, laminated membrane (Figure 3). In the same ovary, a synchronous, grade 3, serous adenocarcinoma was found, extending to the ovarian capsule and into the adjacent mesosalpinx (Figure 4). 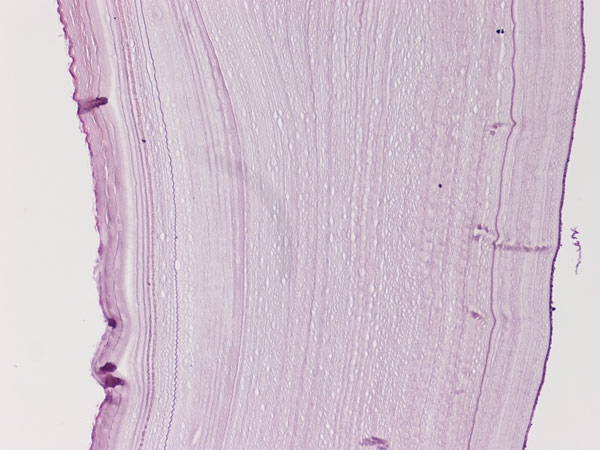 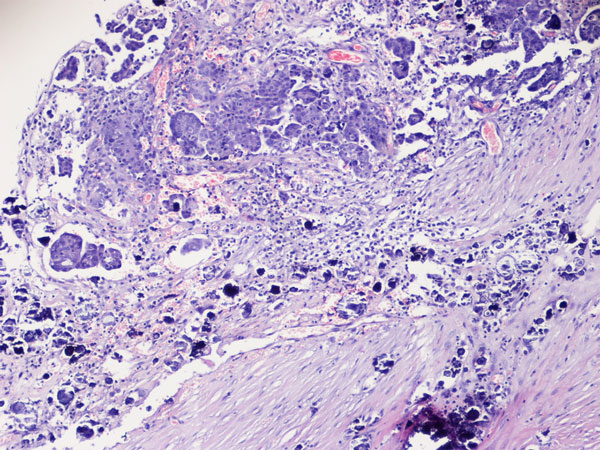 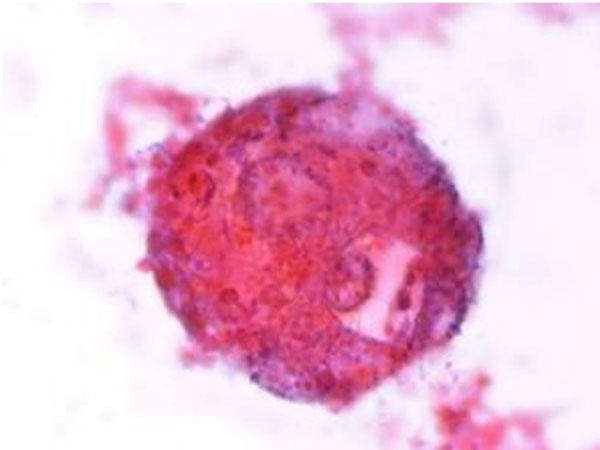 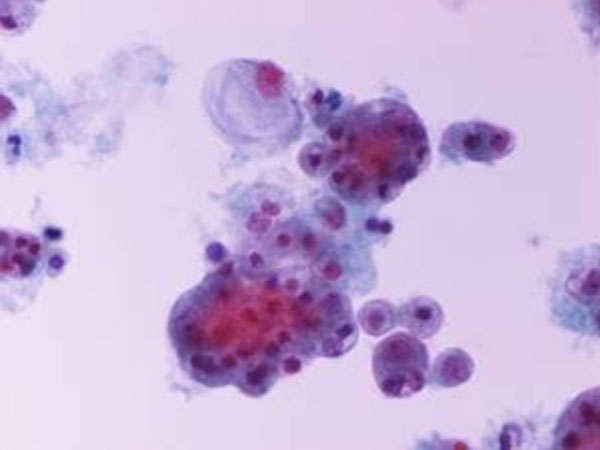 The patient was discharged home on the 12th postoperative day due to low hemoglobin serum levels. No other major postoperative complication appeared. She received 3 cycles of carboplatin and paclitaxel adjuvant chemotherapy. She remains well 26 months after the last chemotherapy and no indication of recurrent disease was observed through gynecological examination, magnetic resonance imaging and Ca-125 follow-up control.

In the reported case ovarian torsion, ovarian abscess and hydrosalpinx were considered less likely diagnosis based on the ultrasonographic scan (USS) findings. Specifically, USS showed normal vascularization of the solid parts of the ovary and smooth margins. Moreover, the typical allantoic image of hydrosalpinx was absent. Finally, the management of our case was adjusted to the imaging findings (USS, CT) as well as the laboratory tests, suggesting the mass to be an ovarian tumor. On the other hand, taking into account the patient’s history of echinococcosis, ovarian hydatid cyst should have been included in the differential diagnosis. Secondary ovarian echinococcosis could probably occur, especially in patients with a history of echinococcosis localized in other organs, like liver and lungs. However, primary ovarian echinococcosis is extremely rare, and only few papers concerning this rare condition have been published11-14.

The synchronous presence of a malignant tumor and echinococcosis, although rare, is possible; making both diagnosis and treatment management more challenging. Considering that histopathological examination of every suspicious ovarian tumor is mandatory, exploratory laparotomy was the most appropriate diagnostic and therapeutic approach. From the surgical point of view, attention should be given to prevent hydatid cyst’s rupture and echinococcosis intraperitoneal dissemination during laparotomy. The presence of the hydatid cyst does not change the approach of the malignancy. In addition to the surgical treatment, neoadjuvant or adjuvant chemotherapy, according to the present guidelines, should be performed. Chemotherapy-induced tumor size reduction is not considered typical due to the presence of the hydatid cyst.

The present case report highlights the fact that hydatid cyst disease, although rare, should be taken into consideration in the differential diagnosis of an adnexal cystic mass especially in endemic areas and in case of echinococcosis in the past medical history. Furthermore, a high index of suspicion for the presence of ovarian echinococcosis is justified, when the tumor size reduction is not consistent with clinical and biochemical (CA-125) remission of the disease in patients with history of hydatid cyst.