Description of case: We report a Tarlov cyst, located in the cervical spine, in a 44-year-old woman who presented with a 3-week history of radicular symptoms of the right C6 root. The perineural cyst was identified at the C5-C6 level following magnetic resonance imaging of the cervical spine. A conservative approach was chosen, with the use of a soft cervical collar for two weeks, a 15-day-course of oral non-steroidal anti-inflammatory medication and instructions concerning limitation of her activities. The outcome of this approach was 90% improvement of her symptoms 24 months after her diagnosis.

Conclusion: This is the first report of a cervical Tarlov cyst treated conservatively without the use of oral or injected steroids. The perineural cyst should be included in the differential diagnosis of patients presenting with radicular symptoms. Hippokratia 2015, 19 (1): 76-77.

Perineural cysts, also known as Tarlov cysts from the name of the first author who described them in 1938 as incidental findings during autopsy, are benign cerebrospinal fluid (CSF) filled cysts of the spinal cord1. Although these cysts are often multiple and appear on dorsal nerve roots almost along the entire spinal cord2, they are most often found in the sacral spine3. Most Tarlov cysts are asymptomatic and very rare some of them can be symptomatic. The treatment options for symptomatic perineural cysts include conservative (oral steroids, transforaminal epidural injections) and surgical approach4-6. Magnetic resonance imaging (MRI) is currently the gold standard imaging modality to detect sacral perineural cysts, to study their relationship with surrounding structures and to plan surgical treatment4.

A 44-year-old woman presented with a 3-week history of radicular symptoms of the right C6 root. She complained for pain in the lateral side of her right forearm, burning sensation and numbness of her right index finger, with no history of trauma. From her past medical history there were no previous chronic problems, no previous hospital admissions and no history of chronic use of any medication. The patient was a heavy smoker. On examination, all deep tendon reflexes were normal. Muscle strength of all upper extremity myotomes was 5/5. Pinprick sensation, light touch sensation, vibration sensation of C5-8, T1 distribution were intact. There was positive response of the Hoffmann’s reflex and aggravation of symptoms when tilting the head to the left (opposite direction of the affected nerve root). The patient did not report any other aggravating or relieving factors. The plain x-ray of the cervical spine was unremarkable. An MRI of the cervical spine revealed a small disc protrusion with no significant degree of stenosis of both foramina and the presence of a perineural cyst on the right on the C5-C6 level, near the dorsal ganglion (Figure 1). The patient was treated with two weeks course of NSAIDs, a soft collar and was asked to limit her activities, especially avoid extreme stretching of her arm and neck. The outcome after 24 months was 90% improvement of her symptoms. The patient was happy with the outcome of this approach and currently does not wish any further action to be taken. 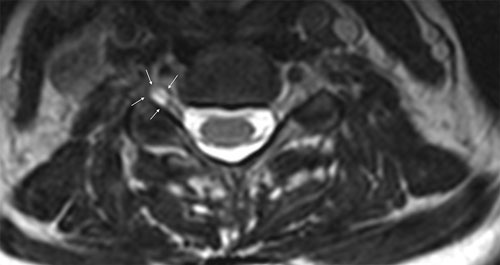 Perineural cysts originate in the perineural space, between the endoneurium derived from the pia matter and the perineurium formed by the arachnoidal matter8. They occur along the nerve roots, at or distal to the junction of the posterior root and the dorsal ganglion8. They are most often found in the sacral spine with a prevalence of 4.6% in the general population3. When Tarlov cysts compress the nerve root, they can be symptomatic8, and those symptoms depend on their location. For instance, the dominant symptom of a sacral perineural cyst is referable to the caudal nerve roots, either sciatica, sacral or buttock pain, vaginal or penile paraesthesia or sensory changes over the buttocks, perineal area and lower extremity8.

MRI is currently the method of choice for the diagnosis of perineural cysts. Findings suggestive of the diagnosis of a perineural cyst are the demonstration of low signal on T-1 weighted images and high signal on T-2 weighted images, similar to CSF4, its shape and the vicinity of its location to the dorsal ganglion6. Both Computed Tomography (CT) without contrast and MRI are considered to be excellent studies for detecting extradural spinal masses.

As Tarlov cysts are often incidental findings, three different diagnostic possibilities exist: 1) another pathology is causing the symptoms (the perineural cyst is not related to symptoms), 2) another pathology is probably causing symptoms, but the Tarlov cyst could be a secondary cause of the symptoms (double crush phenomenon), or 3) the Tarlov cyst is the only pathological finding that can explain the symptoms. Obviously, one should be careful when evaluating the correlation between clinical and radiological findings4.

Literature regarding conservative approach of cervical Tarlov cyst, symptomatic or not, is extremely limited. There are no definitive and specific criteria on whether to follow conservative or surgical approach to this controversial lesion, regardless of its location.

Mitra et al described a conservative approach for a symptomatic cervical Tarlov cyst using oral steroids, as well as epidural steroid injection for a symptomatic Tarlov cyst of the lumbosacral area. They mentioned that the case with the cervical perineural cyst had been treated with trials of NSAIDs and physical therapy without any relief of the pain. Subsequently, a six-day-course of oral steroids was given, leading to relief of symptoms, as far as, the upper extremity motor strength was concerned, but with a slight increase in the patient’s sense of pain5.

The current case is quite rare compared to those published in the literature, due to its location9 and the symptomatology raised. Symptoms were most probably caused solely from the nerve root irritation by the perineural cyst, making it exclusively responsible for the symptomatology of pseudoradiculopathy. Symptomatic perineural cysts usually respond well to steroid treatment, oral or injected. The significant clinical improvement, in the reported symptomatic cervical perineural cyst following the course of oral NSAIDs and usage of soft cervical collar, suggests that this could be another option to the conservative approach of symptomatic Tarlov cysts.

We would like to point out the clinical significance of initially attempting a conservative approach, including soft collar, oral NSAIDs, oral and injected steroids, to any symptomatic perineural cyst without any motor weakness, before advancing to surgical intervention. The need to visualize the clinical entity of “the perineural cyst” as a whole, considering the whole length of the spine, is becoming obvious in order to agree on specific criteria and guidelines of treatment.

The perineural (Tarlov) cyst should always be included in the differential diagnosis in patients presenting with radicular symptoms rising from the cervical spine, until proven otherwise by surgical or radiographical diagnostic means. Even when another cause has been identified along with the incidental finding of a perineural cyst, the cyst should always be considered as a secondary cause of the symptoms.

Authors report no conflict of interest in relation to this article.