Sarcoidosis is a multisystem granulomatous disease with a reported asymptomatic muscle involvement in 25-75 % of patients, while symptomatic involvement occurs in 0.5-5 %1,2.

A 48-year-old woman was admitted with a 6-month history of dyspnea, mild myalgia and weakness of both lower limbs. She had been diagnosed with biopsy-proven both pulmonary and muscle sarcoidosis five years before. She received prednisone for one year with marked improvement of her symptoms and then remained asymptomatic. Serum creatine kinase level was normal, and electromyography was inconclusive. Gallium-67-citrate scintigraphy (67GaS) (Figure 1A; 1B) showed the characteristic for sarcoidosis lambda and panda signs, and increased radiotracer activity in the muscles of the lower and upper extremities. Considering the mild symptoms, the long disease duration, and 67GaS imaging findings, the diagnosis of chronic sarcoid myopathy was made.

A 57-year-old woman was admitted with a 2-month history of dry cough, mild dyspnea on exertion, and myalgia in both lower extremities. 67GaS (Figure 1C; 1D) showed subtle tracer localization in the hilar and mediastinal lymph nodes, and marked nodular uptake in the lower extremities. The diagnosis of sarcoidosis associated with nodular myopathy was made based on 67GaS findings, chest computed tomography demonstrating enlargement of the aforementioned lymph nodes, raised angiotensin-converting enzyme levels, endobronchial ultrasound-guided transbronchial needle aspiration, and muscle biopsy from her left thigh revealing non-caseating granulomata. 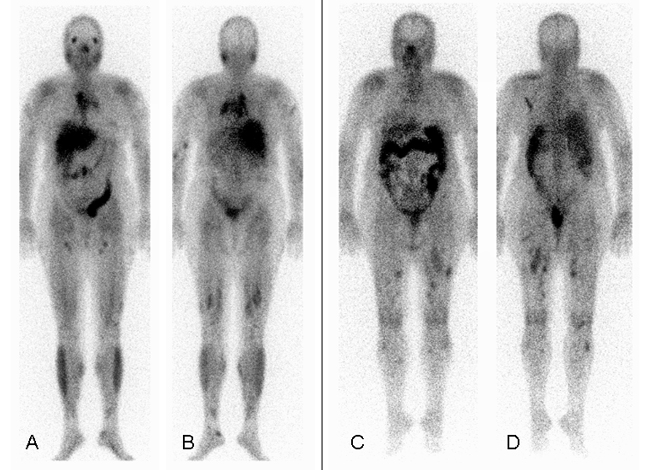 Figure 1: Gallium-67-citrate scintigraphy anterior (A) and posterior (B) images show paratracheal and bilateral hilar uptake, lacrimal and parotid glands uptake as well as inguinal lymph nodes uptake in the first reported case. Symmetrical increased activity is also seen in the muscles of thighs, calves and upper arms. Anterior (C) and posterior (D) images show subtle radiotracer accumulation in the hilar and mediastinal lymph nodes in the second reported case. Intensely nodular uptake of 67Ga is noted in the muscles of both lower limps and in the left back.