Thyroid gland cancer (TC) is considered a rare malignancy, accounting for up to 5% of all cancers in females and up to 2% in males, with an incidence that ranges from 1 to 8 per 100,000 residents1. Even so, it’s the most common cancer of the endocrine system, making up to 95% of estimated new endocrine cancer cases each year2. Although it is considered rare in comparison to other malignancies, there is a stable increase in its incidence, at a rate faster than for any other type of malignancy. This is even more intriguing when one takes into account that the overall cancer incidence rates for all sites have decreased2. TC represents the fifth most common cancer in women while in Italy it’s the second most common cancer in women younger than 453. A study from South Korea has ranked TC as the leading cancer for women; and the fifth most common cancer in men4. Apart from these extreme increases, the incidence of TC has shown a stable increase, for both sexes, in many parts of the world, including the USA, Canada, France, Great Britain, Italy, Israel, South Korea, China, Australia and many other countries3-11. So far, to the best of our knowledge, the incidence of TC in Serbia has not been reported in the literature. The aim of our study was to analyze and report the changes in TC incidence rates in Serbia over a ten year period. Also, we wanted to evaluate potential reasons for an increase in incidence and compare recorded rates to those reported from other European countries.

Data was obtained from “The Cancer Register for Serbia” for the period 1999 to 2008. In 1998, this register was admitted into the international agency for research on cancer (IACR) and European network of cancer registries (ENCR). With the aim of providing quality in the collection, entry, maintenance, processing and analysis of data in the register, the methodology of international associations has been applied (IARC and ENCR) for cancer registers. In order to achieve the best possible quality of data and their international comparability, international diagnostic criteria, classifications and codebooks were used for classification and coding of each entity and modality of the variables covered by the registry. The data we used in the current study included 82% of the population of Serbia, excluding parts of Serbia where data was incomplete for the studied ten-year period. Crude rates (CR), age-specific rates (ASR) and age-adjusted rates (AAR) of TC incidence were calculated. All rates were estimated on a ten-year age group interval for the variable of interest. AARs were calculated by the direct method, according to Segi’s world population12. For data analysis, we used CRs, ASRs, and AARs per 100,000 inhabitants that were calculated separately for each gender, age group and year. For calculation of CRs and ASRs, as the denominator, we used the assessment of the population of Serbia for each of the studied years by administrative districts from the Statistical office of Serbia. CRs and ASRs were calculated separately for each gender and both genders together; and for each of the age groups 0-19, 20-29, 30-39, 40-49, 50-59, 60-69 and 70+. We used a ten-year age group interval, because of the small numbers which would produce unstable rates for a five-year age group interval. For the same reason, the groups 0-19 and 70+ were formed. Regression analysis was performed using the linear trend equation. Changes in the annual AARs of TC incidence were examined by calculating the average annual percentage change (AAPC), by age group and gender, in the studied period. Analysis was performed using the statistical package for social sciences (SPSS) version 15.0 (SPSS Inc., Chicago, IL, USA). All tests were two-sided and p <0.05 was considered statistically significant, and p <0.001 highly statistically significant. 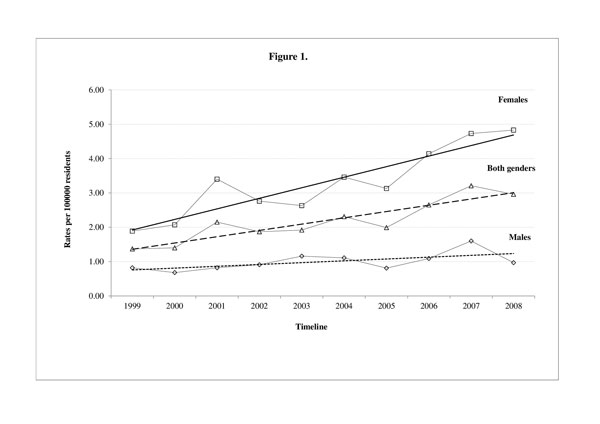 Figure 1: Thyroid cancer incidence trends in Serbia, subdivided by gender, for the period 1999-2008.

In our study, the incidence rates for women were much higher than for men. There was a 3.3 to 1 ratio in favor of women. This is in agreement to other studies which find a similar ratio of 3 to 1 for women and men respectively13,14. A recent study that encompassed 21 European countries reported average TC incidence rates of 1.8 and 5.0 for males and females respectively, for the period of 1995 to 200213. In our study we found that the average incidence of TC in women was roughly 3.3 per 100,000 inhabitants of Serbia, which is roughly one-third less than the highest reported incidence rate for Europe. This ranks Serbia as a country with an average incidence of TC for women in Europe. Men had an average incidence rate of 1.0 which is nearly two times less than the average incidence for European countries, which ranks Serbia as a country with a low incidence of TC for men. It is possible that this is the consequence of a gender-related detection bias where men reach medical attention at an older age; and accordingly women present earlier and are screened more thoroughly for disease15. The discrepancy between average incidence rates for women and low rates for men favors the possibility that the rising incidence is in fact due to a higher detection rate of TC, especially in women. TC incidence was highest in the 50-59 years age group for males, females and both genders combined. Olaleye et al report a high increase in incidence in this age group also16. They also found a significant increase in the 20-39 years age group; whereas we found the highest increase in incidence between the age groups 20-29 and 30-39, showing a twofold and fourfold increase for females and males respectively. Smailyte et al found a steep increase in incidence at the age of 30 for females, too17.

Risk factors for TC have been studied and reported extensively. The most important known exogenous risk factors for TC are iodine deficiency and exposure to nuclear radiation1,18. Even though iodine intake has been suggested as a possible factor affecting the incidence of TC, autopsy studies revealed that the prevalence of TC was not affected by iodine intake19. Nuclear radiation seems to have a more profound effect. Both external radiation and internal exposure to radioiodine through inhalation or ingestion carry an increased TC risk. The population of Serbia was exposed to radiation from depleted uranium ammunition during the NATO bombing campaign of Serbia in 1999. Although a significant radiological risk related to the possible depleted uranium contamination of water and air has not been proven in Serbia, there have been reports that it may have a mutagenic and carcinogenic effect20,21. This could somewhat contribute to the explanation of the steep increase of TC incidence in Serbia in 2007. Another explanation could be the increased use of sophisticated diagnostic imaging modalities that could be one of the factors contributing to the rise of incidence not only because of the detection of small tumors but also due to their actual use. One-third of all computed tomography scans are performed in the head and neck region; therefore the thyroid gland is particularly exposed to radiation. Moreover, the use of iodinated contrast agents increases radiation absorbed by the thyroid by up to 35%22,23. Endogenous risk factors for TC include, among others, obesity and diabetes. A recent study showed that the percentage of the overweight and obese persons is very high in regions of Serbia, being among the highest recorded in European populations24. Also, there has been evidence that the incidence of diabetes in Serbia is increasing25. The association between diabetes and TC is probably weak, but there is a moderate positive association between obesity in women and differentiated TC26. The risk increases among taller individuals of both sexes27. So, all these exogenous environmental factors could all contribute to the increased incidence of TC, particularly in individuals with a genetic predisposition to radiation-associated carcinogenesis. Furthermore, endogenous factors solely specific for the thyroid cannot be entirely excluded28. Apart from these etiological factors the rising incidence of TC is more and more credited to the increase in TC detection. Several studies link the increase of TC with an evolution in clinical practice and enhanced medical diagnosis by the increased use of diagnostic imaging modalities, radio-isotope thyroid scanning and fine needle aspiration biopsy, resulting in more frequent detection of small, subclinical tumors. Furthermore, the indications for removal of solitary nodules are broader, consequently leading to an increase in detection of incidental TC5,29. Grodski et al reported an increase in TC incidence, but link it to an increased sampling of resected specimens by pathologists, leading to an increase in the diagnosis of micropapillary TC; and thus raising the possibility that such a dramatic increase in incidence rates are in fact largely manmade30. On the contrary, Cramer et al, in their study, found that the increasing incidence of TC cannot be fully accounted for by an increased detection of small TC31. Most authors agree that the increased diagnostic scrutiny is the most likely explanation for the evident increase in the incidence of TC, especially since mortality rates haven’t increased5. Nowadays, although we are witnesses to an alarming increase in the incidence of TC all around the world, the mortality rates have remained stable. This pattern of increasing incidence rates while mortality rates remain stable inclines us towards believing that the rising incidence is largely due to discovering small TC, mainly microcarcinoma. This also proves that TC has still good prognosis. Since the increasing incidence of TC in Serbia does not differ much compared to other European countries, it seems that the changes in incidence are mainly due to improved TC diagnosis. TC incidence should be evaluated in a future study when data will be available for a longer period.