Background: Sandfly-transmitted phleboviruses cause to humans an asymptomatic or mild infection to severe meningitis or encephalitis. Phleovirus infections are common in the Mediterranean countries during the summertime when sandflies are active. It is estimated that several cases remain undiagnosed.

Description of case: In July 2013, a 45-year-old Greek male, was admitted to the General Hospital of Florina in northwestern Greece with two-day history of fever, myalgia, arthralgia, mild headache, and hemorrhagic exanthema. A serum sample obtained from the patient on the 6th day of illness was tested negative for West Nile virus infection. Instead, high titers of IgM and IgG antibodies against Toscana virus (TOSV) were detected, with low titers against sandfly fever Naples virus and no reactivity against sandfly fever Sicilian and Cyprus viruses, suggesting that the causative agent was TOSV or other phlebovirus with antigenic similarity to TOSV.

Conclusion: Phleboviruses have to be included in the differential diagnosis of acute summer febrile cases, accompanied or not by neurological symptoms. Effort has to be paid to test clinical samples during the first days of the disease when the virus is detectable by molecular or isolation methods, in order to elucidate the complex epidemiology of phleboviruses in the Mediterranean area.

Sandfly-transmitted phleboviruses (genus Phlebovirus, family Bunyaviridae) are endemic in the Mediterranean countries causing to humans an asymptomatic or mild infection with flu-like symptoms, like fever, myalgia, arthralgia, and malaise. The disease is known as sandfly fever or phlebotomus fever. Toscana phlebovirus (TOSV) has the potential for neuroinvasion, causing meningitis or meningoencephalitis1. Although the outcome is usually favorable, a few severe and even fatal cases have been reported2,3.

A high prevalence (up to 50%) of IgG antibodies against TOSV (or other phleboviruses with antigenic similarities to TOSV) has been reported in Greece, with the highest rates being detected in the islands and the coastal areas4-6. However, the number of reported cases of phlebovirus infection is limited: one case with TOSV seroconversion was described in a German traveler returning from Greece7, and four cases were diagnosed in Greece (in Thessaloniki, Serres and Trikala prefectures). The first Greek case was an 8-year-old boy with meningoencephalitis in whom TOSV IgG seroconversion was observed8. The second, was a febrile child in whom a novel phlebovirus (Adria virus) was detected9, while the third case was a patient with fever and lethargy in whom IgM and IgG antibodies against TOSV were detected in serum and cerebrospinal fluid10. The fourth was a severe encephalitis case caused by TOSV lineage C11. Here we report a case of phleboviral infection observed in Florina prefecture, northwestern Greece.

In July 2013, a previously healthy 45-year-old male, resident of Agios Germanos village, near the Prespes Lake in Florina prefecture (Figure 1), was admitted to the General Hospital of Florina with two-day history of fever (38οC), myalgia, arthralgia, mild headache, and hemorrhagic exanthema. The patient did not present any focal neurological signs or neck stiffness. He reported that five days before onset of the symptoms, he travelled from Germany back to Greece, driving through Austria, Hungary, Serbia and FYROM, and that he stayed overnight in Serbia. 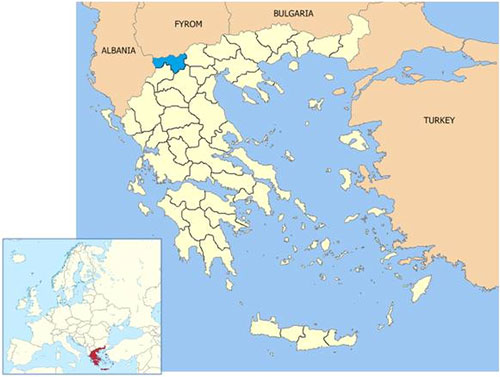 Figure 1: Map of Greece: Florina prefecture is marked. The location of Greece in Europe is seen in the inset.

Given that an outbreak of West Nile virus (WNV) infections was ongoing in northern Greece (although not in Florina prefecture), patient’s serum sample obtained on the 6th day of illness was sent to the National Reference Centre for Arboviruses in Thessaloniki for testing for probable WNV infection. Since there was no laboratory evidence of WNV infection, the sample was further tested by indirect immunofluorescent assay (IFA) for the detection of IgM and IgG antibodies against four phleboviruses: TOSV, sandfly fever Naples virus (SFNV), sandfly fever Sicilian virus (SFSV) and sandfly fever Cyprus virus (SFCV). A commercially available kit was used (Sandfly fever virus Mosaic 1, Euroimmun, Lübeck, Germany). Viral RNA was extracted from patient’s sample, and a reverse transcriptase (RT)-nested polymerase chain reaction (PCR) was applied using phlebovirus generic primers12.

High titers (serum dilution 1:1000) of IgM and IgG antibodies against TOSV were detected in patient’s serum; the respective titers against SFNV were 10-fold lower (Figure 2), while no reactivity was detected against SFSV and SFCV, suggesting that the causative virus was TOSV or other phlebovirus with antigenic similarity to TOSV. Due to the negative PCR result, the exact phlebovirus strain could not be identified. This was most probably due to the low and short viremia seen in phleboviral infections (RNA is usually detectable during the first 1-2 days after symptoms’ onset).

Phleboviruses, including TOSV, are endemic in the Mediterranean countries where sporadic cases, or even outbreaks, are reported every year1. Also, several cases have been reported in travelers returning from Mediterranean endemic areas13-16. In the present case, it cannot be concluded whether the phlebovirus infection was acquired during the patient’s travel through the Balkans or upon his arrival in Greece, since the incubation period of phleboviral infections is 3-6 days, and the patient presented the first symptoms four days after his return to Greece.

Previous studies showed that although the seroprevalence is high in the islands and coastal regions of Greece, it is low in the mountainous areas of the mainland, and specifically in Florina prefecture the TOSV seroprevalence is 0%4-6. However, the area near the Prespes Lake was not checked. Phleboviruses are endemic also in the Balkan countries17-22. Actually, the role of phlebotomine sandflies as vectors of phleboviruses was first demonstrated in 1909 in Dalmatia by an Austrian military commission23, while large outbreaks with several thousands of cases were observed after World War II in Serbia24.

The patient of the present report had highest titers of IgM and IgG antibodies against TOSV, and lower titers against SFNV (which belongs to the same serocomplex), with no reactivity against SFSV and CYPV (which belong to a different serocomplex). Phleboviruses in the same serocomplex exhibit close antigenic relationships resulting in cross-reactivity in serology. Neutralization assays enable the discrimination among phleboviruses within a serocomplex; however, for accurate results, a panel of phleboviruses (including several novel strains) has to be used. In the present case, based on the IFA results it can be suggested that a phlebovirus of the SFNV serocomplex, most probably TOSV, was the causative agent of the disease.

Regardless whether the infection was acquired in Greece or any other Balkan country, the present study suggests that phleboviruses have to be included in the differential diagnosis of acute summer febrile cases, accompanied or not by neurological symptoms. Testing of clinical samples obtained during the first days of the disease will enable the molecular detection, the genetic characterization and the isolation of the virus in cell culture. These data, combined with field studies on sandfly collections, will elucidate the complex epidemiology of phleboviruses in the Mediterranean area.

None reported by authors.