Background/Aim: We report a case of a 54-year-old male patient with background history of hypertension, which suffered a Stanford type A thoraco-abdominal aortic dissection with extension to the visceral arteries.
Description of case: The patient initially underwent surgical repair with replacement of the ascending aorta and of the hemiarch in the acute phase of the dissection. Postoperatively, he developed non-specific abdominal pain that was not related to meals but led to weight loss of 20 kg within the first five post-operative months. Follow-up computerized tomography scan revealed a chronic subphrenic aortic dissection extending to the celiac axis (with involvement of the left gastric and the splenic artery), the left renal artery and the superior mesenteric artery (SMA). The hepatic artery took origin from the SMA and received blood from the true lumen of the vessel, and the right renal artery was entirely supplied from the true aortic lumen. After exclusion of other causes of abdominal pain, the patient was treated with percutaneous stent placement in the dissected SMA with significant improvement of his symptoms.
Conclusion: This case report emphasizes the role of visceral artery endovascular techniques in the management of patients with complicated chronic aortic dissection. Hippokratia 2015; 19 (3): 270-273.

Aortic dissection is a rather common medical condition that may be life-threatening, particularly in the acute setting; the dissection may extend from the aortic lumen to the visceral and iliac arteries leading to complications in regions distally to the chest. Distal vascular ischemic symptoms arising from aortic dissection occur in approximately 30% of these patients1. Involvement of the mesenteric branches can lead to mesenteric ischemia that is clinically evident with hepatic and pancreatic enzyme levels increase, nausea, vomiting, abdomi­nal pain, hemorrhagic diarrhea or even sepsis2. Postprandial abdominal pain has been documented in 97% of all reported large series as the most characteristic symptom of chronic mesenteric ischemia3.

We present a case of a 54-year-old man suffering from chronic mesenteric ischemia without typical postprandial pain but correlated to unintended weight loss of 20 kg within 5 months after surgical repair of a Stanford type A thoraco-abdominal aortic dissection. Patient’s celiac, left renal and superior mesenteric arteries were supplied by both true and false aortic lumen while common hepatic artery took origin from the true lumen segment of the superior mesenteric artery (SMA). He was successfully treated by percutaneous stent deployment within the main trunk of the dissected SMA.

A 54-year-old ex-smoker male patient, with medical history of hypercholesterolemia, chronic constipation, and hypertension, suffered an acute Stanford type A thoraco-abdominal aortic dissection. The preoperative computerized tomography (CT) scan, at that time, showed an extensive dissection involving the whole thoracic and abdominal aorta extending into the origin of the celiac trunk, the left renal artery, and the SMA, while the right renal artery was entirely supplied from the true lumen of the aorta. The common hepatic artery took origin from the true lumen portion of the SMA due to a normal anatomy variant. The proximal entry point of the dissection was detected in the ascending thoracic aorta while a re-entry point was confirmed in the subdiaphragmatic part of the upper abdominal aorta.

Emergency surgical repair consisted in the replacement of the ascending aorta and the hemiarch and the bypass of the right coronary artery, but without any procedure for the visceral branches. Since then, the patient had been complaining of lower abdominal pain, nausea, weakness, that was deteriorating after light exercise or even walking. Although the patient refused correlation of these symptoms with meals, he lost his appetite resulting in weight loss of 20 kg in five months. Clinical examination showed mild tenderness on palpation in the lower abdomen and a slight rebound pain.

The initial follow-up CT scan documented a mild aneurysmal dilatation of upper abdominal aorta with most of the false lumen portion thrombosed, showing remaining flow just above the level of the old re-entry point until the left renal artery ostium (Figure 1a). Right renal artery was still supplied from the true lumen, while celiac artery (supplying left gastric and splenic artery), SMA and left renal artery, received supply from both, the true and false lumens. The common hepatic artery took origin, as mentioned, directly from the SMA, and was supplied from the vessel’s true lumen (Figure 1b). Almost complete occlusion of the dissected aorta lumen was seen until the subdiaphragmatic level. Between the subdiaphragmatic aorta and the left renal artery, there was still patency in the dissected false lumen. 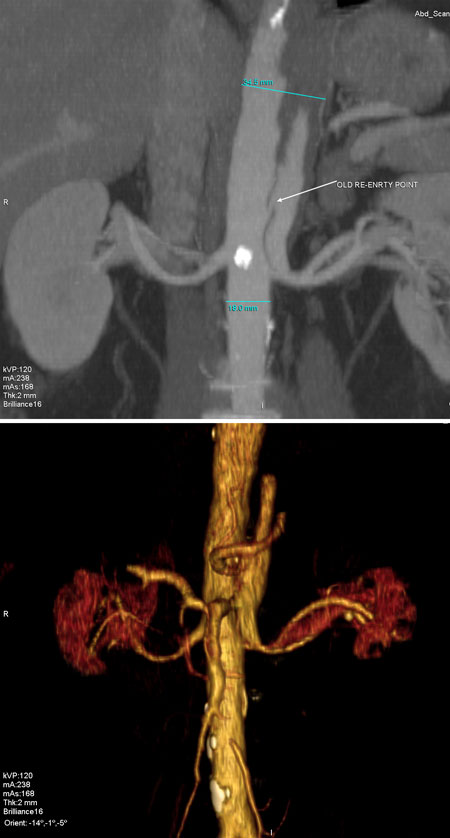 Figure 1: a) Computerized tomography scan reconstruction image showing the distal part of the chronic dissection with one entry point above the left renal artery ostium (dissection’s old-re-entry point) (arrow), the left renal artery supply from both lumens and the almost complete occlusion of the dissected aorta until the subdiaphragmatic level. b) Same computerized tomography scan 3D-reconstruction showing the renal and visceral vessel origin: right renal completely from the true lumen, left renal, superior mesenteric and celiac artery (including splenic and left gastric arteries) from both, true and false lumens, and common hepatic artery from the true lumen of the superior mesenteric artery.

According to the CT findings all the main intestine branches through SMA were enhanced by contrast, therefore, intestinal ischemia was excluded. Nevertheless, due to patient’s symptoms and the underlying clinical problem, we concluded that the blood supplied from the SMA true lumen was not sufficient for required demand, firstly because the common hepatic artery was “stealing” blood through the anatomic variant and secondly because the SMA was also receiving blood from the same false lumen area as the left renal artery. So, we decided that percutaneous stent placement in the first segment of the SMA was required, in order to fix the dissection flap and increase the lumen of the vessel, aiming to provide better blood supply into the SMA region. We measured the length and width of the area of interest, in order to choose the appropriate stent size (Figure 2a). The use of a bare stent was required, so that the common hepatic artery would stay patent.

Figure 2: a) Computerized tomography image of the superior mesenteric artery (SMA) origin, showing measurement of the dissected part of the vessel in order to decide about the stent size. b) Digital subtraction angiography (DSA) image of the aorta at the SMA hight, showing SMA supply through one true and one false lumen (arrows). c) DSA-image of the SMA origin, showing exact stent placement at the dissected part of the vessel and still patent common hepatic artery.

A right brachial puncture was made and after insertion of a long 6 French gauge (Fr) sheath, a 5 French pigtail catheter with radiopaque markers was used for the initial aortography, which confirmed aortic dissection (Figure 2b). Selective catheterization of the true lumen of SMA followed, using a 5 Fr hydrophilic multipurpose catheter. After exact measurement of the SMA diameter, a self-expandable metallic endoprostheses 6 x 40 mm (Luminexx, Bard peripheral vascular, Tempe, AZ, USA) was successfully deployed (Figure 2c). Control angiogram showed patent common hepatic artery and SMA, both from the true lumen and occlusion of the dissection. Post-stenting CT angiography revealed precise expansion of the metallic stent with obliteration of the false lumen and a patent common hepatic artery. As a positive side effect, decrease of the aortic false lumen due to more distal expansion of the thrombus was noticed (Figure 3a). At the same CT scan, celiac and left renal artery were still receiving blood from both lumens (Figure 3b). 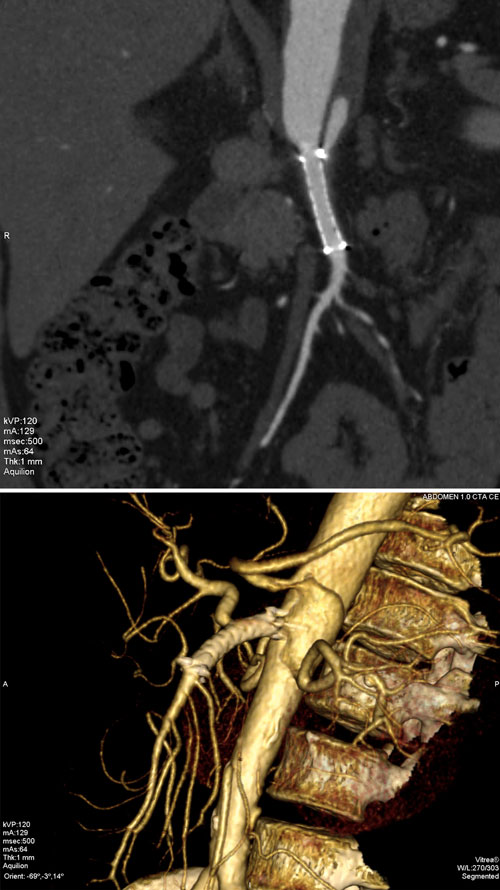 Acute aortic dissection is a severe life-threatening medical condition as the mortality in type A is 5%-45%4 and it can rise up to 85% if dissection involves the SMA1. Hypertension is by far the most common risk factor, as it seems to be present in ~75% of individuals with this condition5. Besides hypertension, our patient had no other significant predisposing factors for aortic dissection; however he suffered an extensive type A aortic dissection, involving the SMA, celiac trunk and left renal artery. Although the incidence of acute dissection leading to mesenteric ischemia or infarction is relatively small (3-5%)1,6,7 our patient was admitted with weight loss and abdominal pain, without the typical clinical manifestation of postprandial pain. However, a diagnosis of symptomatic mesenteric ischemia was established. Unfortunately, optimal therapeutic approach is still not clearly demonstrated for cases of acute dissection complicated with malperfusion, especially when concerning bowel ischemia. Satoshi et al, reported successful management in a case of mesenteric ischemia complicated with acute type A dissection, consisting of arch replacement with cardiopulmonary bypass and saphenous vein bypass, from the common iliac artery to the SMA8. Nevertheless, the survival rate of patients with aortic dissection complicated by blood flow disorder in the SMA is disappointingly low, regardless of surgical tactics or medical treatment1,6,9. Despite the technical improvement of surgical procedures, most of the patients die because of metabolic abnormalities and end organ failure10.

Our case indicated that stent placement into the affected SMA constituted a beneficial supplementary treatment in a patient with a previous surgical repair of a Stanford type A complicated dissection. Yamakado et al, reported a similar relief of mesenteric ischemia by a stent placement into the SMA compressed by the false lumen of an aortic dissection, showing that endovascular repair in such cases can improve the prognosis, provided that mesenteric ischemia is early diagnosed11. Higher morbidity associated with general anesthesia and complicated procedures to place a bypass in cases of open surgery, makes endoluminal treatment a useful option for the treatment of mesenteric ischemia caused by aortic dissection. One serious disadvantage of such a non-operative approach is the risk of misdiagnosing intestinal infarction, which would require resection.

In our case, the CT scan was of great importance, since we firstly confirmed intestinal perfusion and secondly we were aware of the anatomical variations concerning the visceral arteries origins. The variation of the common hepatic artery origin probably led to “blood-steal” from the main mesenteric supply, so clinical deterioration and weight loss occurred. Taking this information into account, we decided that the appropriate solution was stent placement into the SMA in order to restore proper perfusion. Post-procedural clinical improvement confirmed this rationale.