Parachute mitral valve (PMV) is a congenital valvular anomaly in which all the chordae tendineae of the mitral valve are attached to a single papillary muscle. Cardiac imaging with transoesophageal echocardiogram (TOE) and cardiac magnetic resonance imaging (CMR) can be used to clarify the complex left sided structural cardiac abnormalities and provide a precise estimation of the mechanism and severity of mitral valve dysfunction1.

A 41-year-old asymptomatic female was referred to our department due to echocardiographic findings of PMV morphology and significant mitral valve regurgitation. Her personal medical history involved a surgical repair of aortic coarctation (ACoA) with end-to-end anastomosis at the age of six years. TOE showed a single papillary muscle centrally placed receiving chordae from both the anterior and posterior mitral valve leaflets (Figure 1A). The mitral valve orifice was mildly stenotic, and a moderate to severe mitral valve regurgitation due to the prolapse of the elongated chordae tendinae was noted (Figure 1B). The aortic valve was bicuspid with mild stenosis and regurgitation. Left ventricular outflow tract had a tunnel-like morphology with a subaortic membrane (Figure 1C) but without obstruction. A CMR showed normal left ventricular volumes and preserved systolic function. A hypertrophied anterolateral papillary muscle receiving chordae from both mitral valve leaflets (Figure 1D) and a hypoplastic posteromedial papillary muscle were identified (Figure 1E). The mitral valve regurgitation was assessed as moderate (regurgitation fraction 23%). Finally, only mild restenosis at the aortic isthmus was noted (Figure 1F). A decision was made to follow-up the patient closely for symptomatic decline as well as worsening of valvular function. 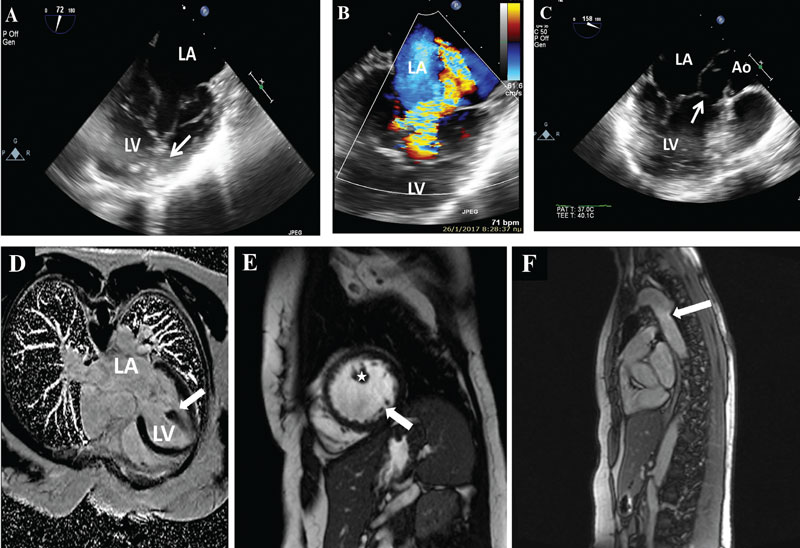 PMV is an extremely rare congenital cardiac defect and in the majority of patients constitutes part of the Shone’s complex. This complex was described more than 50 years ago, and it can be found in 0.6 % of all congenital heart defects. The components of the complex include subaortic stenosis, ACoA, supravalvular mitral ring and PMV2. The patient in this case report can be classified as an incomplete form of the complex, which is combined with a bicuspid aortic valve and subaortic membrane. The incomplete forms of Shone’s complex constitute the majority of case reports encountered in the literature. In adulthood, Shone’s complex displays a relatively low mortality but also a considerable morbidity which is related to repeated hospitalizations for heart failure and interventions for the left-sided cardiac valves3.

Another important issue is that the patient did not report any symptoms. It is known that adults with congenital heart disease may underestimate the degree of their functional limitation, as this is present since infancy10. Exercise testing is especially useful in these cases to unmask the objective occurrence of symptoms in patients who claim to be asymptomatic or have doubtful symptoms11.

In conclusion, a comprehensive assessment should include the combination of thorough clinical assessment of the exercise capacity along with advanced imaging (TOE and CMR) in order to reliably define the mechanism and severity of the mitral valve dysfunction and guide the decision for surgical intervention.