Background/Aim: This report aims to present a rare case of ovarian carcinosarcoma and its current, optimal diagnosis and therapy strategy.
Description of case: We report the case of a 70-year-old patient, who presented at the Obstetrics and Gynecology Department of the University Hospital of Mainz, with a short history of increased abdominal circumference.
Conclusion: The symptoms, diagnosis, and therapy of carcinosarcoma follow the pattern of a high grade epithelial ovarian cancer, fallopian cancer and primary peritoneal cancer. The rarity of this disease is a barrier to conducting prospective trials and establishing guidelines for high-quality evidence data. Hippokratia 2015; 19 (3): 256-259.

Ovarian carcinosarcoma is responsible for 1-4% of all ovarian tumors1. Carcinosarcoma is found not only in the ovary but also in other organs of the genito-urinary tract, including uterus2, fallopian tubes3, breast4, and urethra5. The particularity of this rare malignancy is that it involves both cellular components of epithelium and mesenchyme of the affected organ. The contribution of each element in the development of the malignancy is in different extent and for this reason, the preoperative diagnosis of the disease cannot be reliably made by core biopsy or FNA. Carcinosarcoma can only be diagnosed with the final histological report. Histologically, it is composed of both the epithelial component and the sarcomatoid component. Specifically in the ovary, the epithelial component may be endometrioid, clear cell, serous or squamous epithelium. The mesenchymal component may be homologous: fibrosarcoma and leiomyosarcoma, or heterologous: osteosarcoma, rhabdomyosarcoma, liposarcoma or chondrosarcoma.

The average age of onset of the typical female patient with ovarian carcinosarcoma is between sixty to seventy years. At the time of diagnosis, the International Federation of Gynecology and Obstetrics (FIGO) stage is III-IV. About half the patients have ascites, which will be the cause of turnout. Also, one in two patients will already have pelvic and para-aortic lymph node metastasis6 while almost all patients will be expressing the antigen CA-125, at a value above 75 U/ml7. The median survival of patients is less than two years. Negative prognostic factors8, in the course of the disease, are: overriding sarcomatoid element more than 25% and especially the heterologous one, disease stage, tumor grade9, large size of the initial tumor, residual disease after surgery, age under 65 years, the mutation of p5310, the expression of VEGF and the long-term tamoxifen11 use. The treatment of newly diagnosed and relapsed ovarian carcinosarcoma is following the model of epithelial ovarian cancer. The prognosis is poor and the median overall survival is around 20 months. There are reports in the literature with survival over 46 months12.

We report the case of a female patient, who presented at the Obstetrics and Gynecology Department of the University Hospital of Mainz, with a short history of increased abdominal circumference. The 70-year-old postmenopausal woman presented with two-month-history of abdominal distension. She reported no vaginal bleeding or abdominal pain and had no relevant history of urogenital malignancy. She reported having a stable weight, and her vital signs were within normal range. In her medical history, she underwent, three years before her presentation, a lumpectomy in her right breast and ipsilateral axillary lymphadenectomy due to invasive lobular breast cancer. TNM classification was pT2N1M0 G3 R0 L0 and her receptor status was ER/PR: positive, and HER2/neu: negative. She received adjuvant chemotherapy with six cycles of TAC Schema (Docetaxel, Doxorubicin, and Cyclophosphamide), and supplementary radiotherapy to the right axilla and right anterior chest wall. Due to the positive estrogen and progesterone receptors status, she received daily a maintenance phase treatment with 20 mg tab per os tamoxifen.

Clinical examination demonstrated a sizable abdominal mass and abdominal computed tomography (CT) (Figure 1) showed a mass of maximum diameter 10 cm, composed of mixed solid and nonsolid elements that seemed to emerge through the right ovary. Besides ascites, no other visceral metastases were present. The chest X-ray showed no pleural effusion or other suspicious findings from the pulmonary parenchyma. The mammogram and ultrasound of both breasts and axillary cavities showed no signs of local recurrence of the breast cancer while colonoscopy and gastroscopy showed no suspicion of malignancy. Tumor markers showed increased expression of CA-125 at 3043 U/l and CEA at 13ng/ml. Under the suspicion of ovarian malignancy, it was decided to conduct an explorative laparotomy. 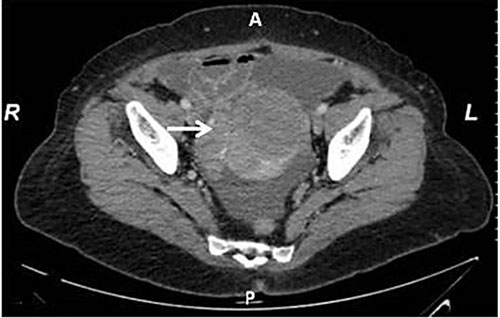 Figure 1: Axial computed tomography scan of the lower abdomen demonstrated a sizable abdominal mass (arrow) in a 70-year-old postmenopausal woman who was diagnosed with carcinosarcoma.

Surgery undertaken included ascitic fluid cytology, hysterectomy, bilateral oophorectomy, omentectomy, appendectomy, para-aortic and pelvic lymphadenectomy, peritoneal, subdiaphragmatic, paracolic and minor pelvis biopsies (Figure 2). Intraoperatively, the omentum showed minimal focal thickenings, and besides the mass, no other macroscopically visible metastatic foci were noticed. The resection was described as R0, and her postoperative course was uncomplicated except for lymphocele. The histological examination showed heterologous malignant mixed mullerian tumor of the ovary, measuring 10 x 9 x 8 cm. The Oncology Board decided adjuvant treatment with chemotherapy. On the fifth postoperative week, the patient was fit to commence treatment which consisted of six cycles, every three weeks (q3w), with Carboplatin 5 AUC and Paclitaxel 175 mg/m2. Treatment was completed within the specified time periods, and the major adverse event was peripheral neuropathy. 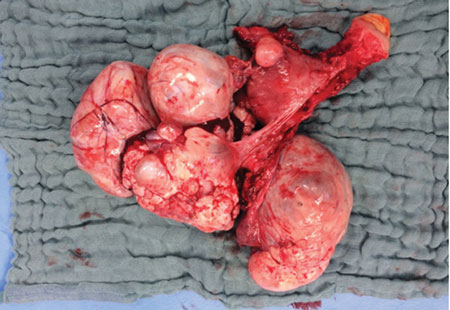 Figure 2: Surgical specimen of the excised ovarian carcinosarcoma, including uterus with bilateral ovaries and fallopian tubes. The compact and cystic morphology of carcinosarcoma is shown.

Subsequently, the patient was monitored by clinical examination and tumor markers every three months for the first year after the initial diagnosis. She came earlier than the fourth scheduled clinical appointment, due to atypical abdominal pain and heaviness in the pelvis. Clinical evaluation and CT scan of the abdomen and pelvis revealed intraperitoneal disease recurrence. Tumor markers were markedly elevated: CA-125 at 1800 U/ml and CEA at 12 ng/ml. It was decided to perform six cycles of chemotherapy with Carboplatin 5 AUC day 1/Gemcitabine 1000 mg/m2 days 1, 8 every three weeks. After the third cycle, she was assessed clinically and by tumor marker measurement, and after the sixth cycle, a CT of the abdomen and pelvis was also performed. According to the Response Evaluation Criteria In Solid Tumors (RECIST), the CT scan showed partial response while the tumor markers despite declining, did not return to normal values (CA-125: 53 U/ml, CEA: 7.8 ng/ml). She underwent three additional cycles of the same chemotherapy regimen, after which, imaging findings and tumor markers remained almost unchanged and was decided to introduce her to scheduled regular checks every three months with clinical examination, tumor markers, and CT scans. The patient presented with disease progress, five months after the last cycle with Carboplatin/Gemcitabine, and she was given new chemotherapy with Topotecan. She passed away three months later.

The recommendations of the national oncology board of the U.S. for the treatment of carcinosarcoma of any stage, are to follow the guidelines for the group of epithelial ovarian cancer, fallopian tube cancer and primary peritoneal cancer (briefly ovarian cancer, version 2.2015). In the same mode are the guidelines of the European Oncology Community13 and the German Society of Gynecological Oncology. The staging of the disease was performed according to the criteria of TNM or FIGO as revised in 2009. The initial approach to diagnosis includes patient’s history, physical examination, blood tests, tumor markers (CEA, CA-125) and additionally in the presence of previous histological confirmation: chest radiography, mammography, gastroscopy and colonoscopy, ultrasound and/or CT scan of the abdomen.

The initial management of the patient with carcinosarcoma is surgical resection of the disease, when possible. The cytoreductive surgery includes the removal of all visible disease masses and complete surgical staging: obtaining ascitic fluid cytology, hysterectomy, bilateral salpingo-oophorectomy, omentectomy, and appendectomy, para-aortic and pelvic lymphadenectomy to the left renal vein, peritoneal, paracolic, subdiaphragmatic and minor pelvis biopsies. Of particular value is the careful and detailed recording of surgery. Carcinosarcoma patients may not be suitable candidates for surgical techniques for preserving fertility. In advanced disease, stage FIGO III-IV, cytoreduction is also necessary. Also, in individual cases may be given preoperatively three or six cycles of chemotherapy in order to achieve an optimal surgical result.

Complementary adjuvant chemotherapy is always administered, even in stage I disease. The necessity for additional radiation therapy has not been established, despite the existence of sarcomatoid element. Perhaps future multicenter studies may give more information on the value of radiotherapy in this disease. The standard chemotherapy regimen is the use of a platinum-based agent and taxane, such as intravenous Carboplatin 5AUC or 6AUC/Cisplatin/Oxaliplatin alone or in combination with Paclitaxel 175 mg/m2 for three to nine cycles q3w. Under consideration is the role of intraperitoneal chemotherapy with Cisplatin and hyperthermia (HIPEC). HIPEC is an acceptable treatment option for ovarian cancer, but there are no published data specifically for carcinosarcoma14. The combination of intravenous (iv) and intraperitoneal (ip) chemotherapy administration is also possible. In any case, patient participation in clinical studies is strongly recommended.

The proposed strategy for monitoring these patients is physical examination and tumor marker assessment, CEA and CA-125 every three months, if initially elevated. Additionally, a radiological examination can be performed on clinical indication. When there is residual disease after surgery or when the disease is initially FIGO IV, then the patient’s monitoring needs additionally regular imaging, usually CT of the chest, abdomen and pelvis. In relapse of the disease, an actual restaging with CT or magnetic resonance imaging, or positron emission tomography scan and determination of tumor markers, mainly CA-125 and CEA, is needed. In the management of recurrence a repetition of cytoreductive surgery, chemotherapy and when indicated, targeted radiotherapy, e.g., for abdominal wall or bone metastasis, are acceptable. Chemotherapy could be once again platinum-based. In platinum resistant tumors there are alternative regimens preferred, combined or not. Mainly are administered Gemcitabine, Topotecan, Etoposide, Ifosfamide or an Anthracycline such as Doxorubicin. In literature reviews, however, the superiority of a particular chemotherapy regimen has not yet been demonstrated15.

In the field of carcinosarcoma, there are no available final results from new prospective randomized studies to support specific guidelines for diagnosis and treatment of the disease15. Clinical phase III trials specifically for carcinosarcoma of the ovary are not currently conducted, according to clinicaltrials.gov. In several studies, however, carcinosarcoma patients can also be included. Α phase 3 clinical study including cases with ovarian carcinosarcoma is the GOG-0261. The study compares the effectiveness of combination with Paclitaxel Carboplatin versus the combination of Paclitaxel with Ifosfamide in all stages of the disease. The results of this study have not yet been published; according to the clinicaltrials.gov website, the primary completion month for this study was November 2015. There are several clinical phase 1 and 2 studies that may recruit patients with ovarian carcinosarcoma. These studies either look for the optimal combination of classical chemotherapy e.g., Carboplatin/Paclitaxel Gemcitabine, Paclitaxel/ pegylated liposomal Doxorubicin, Carboplatin/pegylated liposomal Doxorubicin, Trabectedin, or the optimal route of administration iv or ip Docetaxel/Paclitaxel/Carboplatin. And also, there are other trials, phase 1 or 2, investigating the effect of new targeted agents including inhibitors of mTOR: temsirolimus, neoangiogenesis inhibitors (anti-VEGF): bevacizumab, zif-aflibercept, sorafenib, sunitinib, inhibitors of PARP, eg olaparib, verliparib, Aurora kinase inhibitors, e.g. alisertib and tyrosine kinase inhibitors, e.g. imatinib. However, in the near future, there will be no new factors in daily practice treatment of ovarian carcinosarcoma.

The carcinosarcoma is an extremely rare tumor and associated with poor prognosis6. The optimal surgical removal of tumor mass and when possible macroscopically disease-free postoperative peritoneal cavity seems to have an important role in improving survival of these patients. Unfortunately, the existence of the sarcomatoid element limits the treatment options and prognosis of these patients. The need to improve poor prognosis of these patients must give the motivation to conduct further multicenter studies and introduce new and experimental therapies. Nevertheless in various carcinosarcoma histological reports, there are identified many targets, such as EGFR, c-Kit, Cox-2, Her-2-neu16 and VEGF17. Those molecules are currently under investigation and could offer future therapy perspectives. Probably, targeted therapies could obtain their place in the future treatment options of this aggressive tumor, at least in the field of disease recurrence and conservation without chemotherapy regimen. The ongoing research efforts and clinical studies suggest a new therapeutic direction, despite the poor results so far.