Background: Heroin use by non-injecting routes of administration (snorting, swallowing, “chasing the dragon”) is considered to be safer but is not risk-free for fatal overdose or serious side effects. We report the case of an adolescent who was transferred unconscious to the emergency department after heroin inhalation. Description of the case: A 17-year-old male was transferred to the emergency department unconscious (Glasgow coma scale: 6/15) after heroin inhalation. He was treated with non-rebreather mask and intravenous infusion of naloxone with gradual improvement of consciousness and arterial blood gasses. The chest computed tomography showed signs of acute respiratory distress syndrome. Laboratory exams on the second day of hospitalization showed elevated creatine kinase (CK) and troponin-I levels while his electrocardiography (ECG) showed J-point elevation in V1, V2, and V3 precordial leads. On the second day of hospitalization the pulmonary infiltrates were not present in his chest X-ray while on the eighth day, troponin-I and CK levels were normalized without dynamic ECG changes and the patient was discharged uneventfully. Conclusion: Heroin inhalation may cause severe complications, such as non-cardiogenic pulmonary edema, rhabdomyolysis or myocardial injury. Hippokratia 2016, 20(1): 84-87

Illegal drugs are a major social problem worldwide. The economic crisis has led the illegal drug users to search for cheaper but potentially more harmful substances. Although heroin use by non-injecting routes of administration (“chasing the dragon”, snorting, swallowing) is considered to be safer, it is not risk-free for fatal overdose1. At least 7.5 % of all heroin-related deaths in the Stockholm area involved non-parenteral administration2. The first heroin smoking originated in the 1920s in Shanghai while “chasing the dragon” originated in the 1950s in or near Hong Kong3. Regarding chasing, the heroin is put on an aluminum foil, heated from below and the user inhales the fumes with a straw. Although infections like hepatitis B, C, and HIV are more likely to be transmitted by intravenous drug use, it was found in a cross-sectional study that hepatitis C infection is higher in non-injecting drug users compared to the general population and is more likely among older drug users, those with tattoos and among crack cocaine users that share the inhalation implements4. Besides the lesions of heroin snorting on the orofacial region5, heroin inhalation has been related to numerous side effects from the respiratory, nervous, and circulatory systems. We report the case of an adolescent using heroin by inhalation who presented with non-cardiogenic pulmonary edema, rhabdomyolysis and myocardial injury.

An unconscious 17-year-old male Roma was transferred to the emergency department of our hospital. On presentation his vital signs were: blood pressure 110/60 mmHg, heart rate 130 beats/min, SPO2 71 % and body temperature 36.1 °C. The Glasgow coma scale (GCS) was 6/15 (flexion withdrawal to pain). Lung auscultation revealed end-inspiratory crackles while all other clinical examination was normal. No past medical history was reported while his relatives reported suspicion of illegal drug use. His initial arterial blood gasses (ABGs) showed pH 7.33, pO2 40.5 mmHg, pCO2 43.3 mmHg, lactate 4.1 mmol/L, and HCO3– 23.0 mmol/L. His electrocardiography (ECG) showed sinus rhythm tachycardia (130 beats/min) (Figure 1). The patient was treated with non-rebreather mask and intravenous infusion of naloxone 1.2 mg with gradual improvement of his consciousness. His ABGs under the non-rebreather mask were pH 7.38, pO2 78.8 mmHg, pCO2 36.1 mmHg, lactate 1.2 mmol/L, HCO3– 21.8 mmol/L. His chest X-ray revealed bilateral diffuse infiltrates (Figure 2) while a chest computed tomography (CT) showed signs of acute respiratory distress syndrome (Figure 3). His laboratory exams showed hematocrit 44.6 %, hemoglobin 14.1 g/dl, white blood cells 32,500/μL (neutrophils 25,600/μL), platelets 374,000/μL, aspartate aminotransferase 93 U/l (normal range: 5-37), alanine aminotransferase 60 U/l (12-78), lactate dehydrogenase 381 U/l (81-225), creatine kinase (CK) 1,603 U/l (39-308), troponin-I 0.667 ng/ml (normal value <0.06), and C-reactive protein (CRP) 2.80 mg/dl (normal value <0.30). A brain CT did not reveal any pathological findings while the remaining laboratory exams were within normal range. During the first hours of hospitalization, the patient was treated with continuous intravenous infusion of naloxone at a rate of 0.05 mg/h with gradual improvement of his consciousness and ABGs without necessitating diuretics administration. Due to the rapid improvement of his arterial PO2 with the non-rebreather mask and the gradual improvement of his level of consciousness, the attending anesthesiologist did not recommend invasive mechanical ventilation. 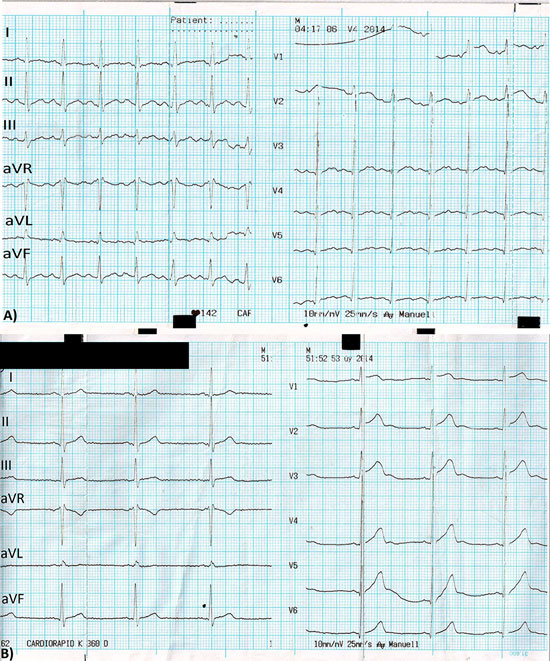 Figure 1: Electrocardiography of the 17-year-old patient who was transferred unconscious after heroin inhalation, A) at the time of admission showing sinus tachycardia at a rate of 130 beats/min, B) on the second day after treatment with non-rebreather mask and intravenous infusion of naloxone, showing sinus rhythm at a rate of 65 beats/min with J-point elevation of 0.2 mV in V1, V2, and V3 precordial leads.

On the second day of his hospitalization, the patient had GCS of 15/15, oxygen supplementation was provided with Venturi mask 50 %, and the naloxone infusion was discontinued. Low molecular weight heparin at a prophylactic dose was initiated. In a repeat chest X-ray, the pulmonary infiltrates were not present (Figure 2) while the patient’s ABGs were within normal ranges in the room air. His ECG showed sinus rhythm at a rate of 65 beats/min with J- point elevation of 0.2 mV in V1, V2, and V3 precordial leads (Figure 1). His laboratory exams showed an increase of the CK (7,505 U/l) and troponin-I (5,287 ng/ml) levels. The patient reported mild myalgia at his thighs while he did not report any chest pain. Cardiac examination and echocardiogram showed no pathological findings. The patient was treated with intravenous (IV) infusion of normal saline for preventing complications of rhabdomyolysis while a daily monitoring of his troponin-I levels was planned. At the same day, the patient developed fever (38.5 °C) that was attributed to possible aspiration and dual antibiotic therapy with piperacillin/tazobactam 4.5 g IV every 8 hours and linezolid 600 mg IV every 12 hours was initiated. Blood and urine cultures were negative, and the patient became afebrile from day five of his hospitalization. When detailed history was obtained from the patient himself, he reported heroin inhalation few hours before his admission to the hospital. He also reported that this was the third time that he used heroin by inhalation. He did not report any other illegal drug use or injecting heroin and the physical examination did not reveal track marks.

Figure 2: Chest X-rays of the 17-year-old patient who was transferred unconscious after heroin inhalation, A) at the time of admission showing bilateral diffuse infiltrates, B) on the second day after treatment with non-rebreather mask and intravenous infusion of naloxone, showing the disappearance of the pulmonary infiltrates. 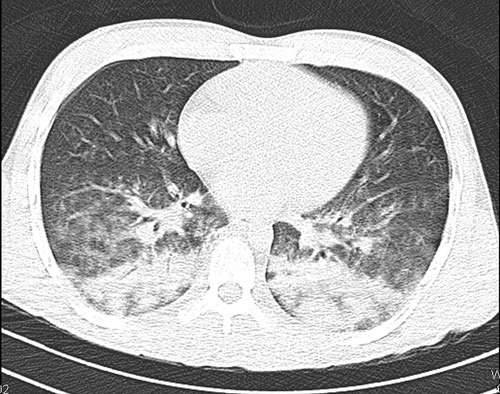 Figure 3: Chest computed tomography of the 17-year-old patient at the time of admission showing signs of acute respiratory distress syndrome.

During the following days his troponin-I and CK levels gradually decreased and were normalized on the eighth day of his hospitalization and he remained well. The serial ECGs did not reveal any changes, so the J- point elevation was attributed to possible early repolarization. A heart magnetic resonance imaging was recommended. The patient and his relatives denied further investigation and the patient was discharged on day nine of hospitalization.

Illegal drugs consumption is increasing worldwide and for that reason, clinicians should be aware of the possible adverse manifestations for administering early and appropriate treatment. The respiratory system is commonly affected by heroin inhalation. In particular, cases of asthma or eosinophilic pneumonia6,7, acute interstitial pneumonia8, pneumothorax or pneumomediastinum9, pulmonary edema, and early onset emphysema10 following acute or chronic heroin inhalation have been described. Patients who inhale heroin mix with cocaine vaporized on aluminum foil (known as “rebujo”) are at increased risk of bronchial hyperreactivity11. Non-cardiogenic pulmonary edema is an infrequent complication of heroin overdose, and only 33 % of these patients require mechanical ventilation12. The pulmonary fluid analysis in cases of heroin-induced pulmonary edema showed a higher concentration of proteins as compared to cardiogenic pulmonary edema patients12. Possible mechanisms of heroin-induced pulmonary edema are attempted inspiration against closed glottis, neurogenic pulmonary edema due to sympathetic vasoactive responses after reversal of opiate overdose, hypoxemic myocardial dysfunction, damage to alveolar integrity from pneumocyte hypoxia and morphine-induced anaphylactoid mechanism9.

Interestingly, the opioid antagonist, naloxone, has been implicated in provoking pulmonary edema but in many of these cases, it was hard to differentiate if the cause was the action of naloxone or the effect of the underlying disease process or other drugs that have been administered13. The possible mechanism of naloxone-induced pulmonary edema in overdosed heroin users is myocardial stunning due to catecholamine excess resulting in pulmonary edema, but this hypothesis was not supported by experimental and human data9. Moreover, it has been suggested that naloxone simply reveals the opioid-induced pulmonary edema13.

The heart is another organ which is usually affected in the illegal drug users either as a direct target of the drug (myocardial infarction, myocarditis) or as a consequence of the repeated injections (endocarditis)14,15. A case of acute myocardial injury after heroin inhalation has also been reported16. Additionally, a case of heroin withdrawal precipitating Takotsubo cardiomyopathy was reported in a patient who was on methadone maintenance17. A possible mechanism is the abrupt interruption of high dose of opiates which put the myocardium in stress secondary to adrenergic surge17. Except the possible myotoxic effect on the myocardium, the skeletal muscles are another target of heroin toxicity. Melandri et al, published a case of rhabdomyolysis and myocardial injury caused by acute heroin intoxication18, while Otero et al, a case of rhabdomyolysis and acute renal failure as a consequence of heroin inhalation19.

In regards to the reported case, we speculate that heroin inhalation caused non-cardiogenic pulmonary edema as the direct toxic effect of heroin leading to leaky pulmonary capillaries. By excluding other traumatic and nontraumatic causes of rhabdomyolysis20, a direct toxic effect of heroin on the skeletal muscle cells is considered as the possible mechanism. The myocardial injury could be attributed to the direct toxic effects of heroin on the myocardium while hypoxia, vasoconstrictive substances released by muscle necrosis or hypersensitivity reactions associated with heroin or its adulterants cannot be excluded. Myocarditis is another possible diagnosis for the reported patient, which could not be excluded as he denied further exams.

The heroin abuse was not confirmed by toxicological exams regarding the major metabolites of heroin (6-monoacetylmorphine and morphine) and this is a limitation of the current report. Moreover, the potential concomitant use of other illegal substances (alcohol, benzodiazepines, cocaine, amphetamines etc) was excluded based on his personal report without toxicological confirmation. Thus, the potential impact of other illegal substances on his clinical presentation cannot be excluded.