Background: Cat-scratch disease is caused by Bartonella henselae and transmitted to humans via the cats. Patients usually present with cutaneous lesions, regional lymphadenopathy and a brief period of fever.
Case Report: We report a rare case of an isolated splenic cat-scratch disease in an immunocompetent 27-year-old woman who presented with prolonged fever and multifocal splenic lesions. The patient was treated successfully with a long course of antibiotics.
Conclusion: Isolated splenic lesions and fever is a rare manifestation of the cat-scratch disease. There is need of high suspicion index by the physicians to diagnose the disease promptly without invasive methods. Hippokratia 2016, 20(4): 306-308

Cat-scratch disease (CSD) is an infection caused by the gram-negative bacillus Bartonella henselae and is transmitted to humans via animal scratches or bites, especially from cats. The disease is commonly seen in children and young adults with a variety of clinical manifestations which depend on the immune response of the host. The infection is usually presented with regional lymphadenopathy and is self-limited. In rare cases, it can present as disseminated disease and affect almost every organ of the body. In this report, we present the case of an immunocompetent adult female with isolated splenic CSD, who was admitted to our hospital with prolonged fever without any obvious source of infection.

A 27-year-old woman was admitted to hospital with a 15-day history of fever (up to 39,5°C), night sweats, generalized weakness, and headache. She had a past medical history of chronic hepatitis B, and she was on tenofovir. She had no history of excessive alcohol consumption or illicit drugs. There was no history of a recent travel abroad. She reported having few cats residing in her garden but no indoor pets. On examination, the patient appeared clinically well. Her temperature was 38.5 °C, heart rate was 80 beats/min, blood pressure was 120/70 mmHg, and oxygen saturation was 98 % breathing room air. The physical examination was unremarkable. Lymph nodes, liver, and spleen, were not enlarged.

The patient continued to be febrile without any symptoms suggestive of the site of infection. A computed tomography (CT) scan of thorax-abdomen-pelvis revealed multiple hypodense areas within the splenic parenchyma. A transthoracic echocardiogram did not reveal any valve vegetations or any structural abnormalities. A magnetic resonance imaging (MRI) scan of the upper abdomen confirmed three splenic lesions consistent with abscesses (Figure 1). 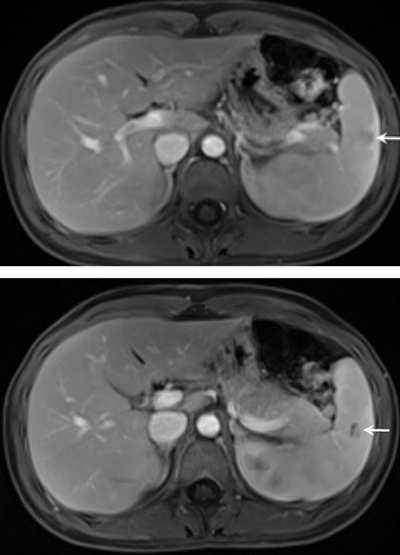 Figure 1: Axial images of magnetic resonance imaging scan of the upper abdomen showing two of the three detected splenic lesions consistent with abscesses, before the initiation of antibiotics.

The patient was treated with oral azithromycin (500 mg on day one, followed by 250 mg/day) for four days and rifampicin (600 mg/day, per os) for fifteen days. She then continued with doxycycline (200 mg/day, per os) for two months. Her pyrexia resolved after three days of treatment. An MRI scan of the abdomen on week four of treatment showed complete resolution of one splenic lesion and size reduction in the rest of them. C-reactive protein normalized 40 days after treatment initiation. A repeat MRI scan in two months after the end of treatment revealed complete resolution of the splenic lesions (Figure 2). 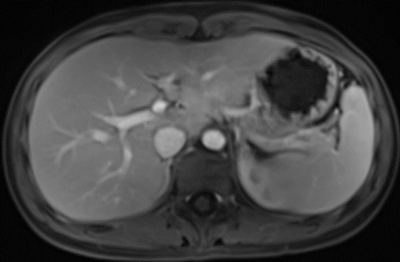 Figure 2: Axial image of magnetic resonance imaging scan of the upper abdomen after the end of treatment showing complete resolution of the splenic lesions.

The genus Bartonella includes facultative intracellular bacteria that cause long-standing intraerythrocytic bacteremia in their host1. Cats, especially kittens, are the natural reservoirs of Bartonella henselae, and its transmission is reported to occur through scratches or bites. A remarkable feature of all Bartonella spp. is the ability to cause acute or chronic infections and vascular proliferative or suppurative manifestations. The clinical spectrum is determined mainly by the status of the immune system of the infected human2. The majority of patients (85-90 %) present with localized cutaneous lesions and self-limited lymphadenitis of one or more regional lymph nodes that drain the primary inoculation site, with or without a brief period of fever. Atypical CSD occurs in 5-14 % of patients, and almost any organ can be involved. Isolated involvement of the spleen without lymph node or liver involvement is extremely rare and is a diagnostic and therapeutic challenge3.

There is no definitive test for the diagnosis of CSD. Blood cultures should be held for more than 21 days because Bartonella henselae is a slow-growing bacterium and there are cases with proven, by PCR, bacteremia with negative blood cultures. It is suggested that at least three of the four following criteria should be present in order to establish the diagnosis of CSD in patients with typical findings: i) cat or flea contact regardless of the identification of an inoculation site lesion, ii) negative serology for other causes of adenopathy; sterile pus aspirated from a node; a positive Bartonella polymerase chain reaction (PCR)assay; and/or liver or spleen lesions seen on CT scan, iii) positive serology for Bartonella henselae with IgG titer ≥1:64, and iv) biopsy showing granulomatous inflammation4,5.

The main differential diagnosis should be from lymphoproliferative diseases, such as lymphoma, infiltrative processes (sarcoidosis, rheumatological diseases), and infectious causes, such as tuberculosis, fungal or pyogenic abscesses, and septic emboli from culture-negative endocarditis6,7.

Treatment of disseminated CSD is still empirical. The clinical situations are extremely different, and the database of existing clinical studies is very limited. Case reports and expert opinion primarily guide the antibiotic treatment. In the recommendations published in 2004 the combination of doxycycline (100 mg per os or intravenous twice a day) with rifampicin (300 mg per os twice a day) is proposed for treatment of the complicated CSD (American Society of Microbiology, June 2004)8. The optimum duration of the antibiotic treatment for immunocompetent patients with complicated CSD has not been determined yet and is guided by the clinical response of each patient.

In cases of isolated splenic abscess that have been reported to date in literature, splenectomy was performed in two out of five occasions. They also used multiple antibiotics as azithromycin, doxycycline, rifampicin, and clarithromycin7,9-11. In our case, we prescribed a short course of azithromycin and rifampicin, followed by a 2-month course of doxycycline. The patient had been clinically improved after the first week of treatment, and there was complete resolution of the splenic lesions after eight weeks of antibiotics. The antibiotic choice was guided by our patient’s history of chronic HBV infection and the fact that she had mildly elevated liver enzymes on admission; finding which appeared to be chronic and was noticed on serial pre-admission blood results.

To our knowledge, this is the first case of complicated CSD with multifocal splenic abscesses in a young immunocompetent adult which was successfully treated without splenectomy, with an initial short course of a dual oral antibiotic regime (Azithromycin, Rifampicin), and then with Doxycycline as a monotherapy for two months.