Background: Gaucher disease (GD) is a lysosomal storage disorder characterized by severe skeletal complications. Bone complications are an important cause of morbidity of GD and are thought to result from imbalance in bone remodeling.The objective of this case series was to analyze the long-term effect of enzyme replacement therapy on chemokines MIP-1a and MIP-1b, cytokines IL-3, IL-6, IL-10, and IL-12, osteoprotegerin (OPG) and osteocalcin (BGP), chitotriosidase, quantitative ultrasound sonography (QUS), bone magnetic resonance imaging (MRI) and dual-energy X-ray absorptiometry (DXA) in patients with GD in Northern Greece. In addition, the study aimed in investigating possible relationship between the above mentioned parameters.
Patients and Methods: Seven patients with GD type I (three males and four females) were included in the study. Mean age was 26.29 ± 15.34 years (range 7-47 years). Six patients were receiving enzyme replacement therapy (ERT), with 40-60 IU/kg of imiglucerase weekly, for a mean period of 36 months prior to study initiation. One patient started ERT after his inclusion in the study. The levels of MIP-1a, MIP-1b, IL-3, IL-6, IL-10, IL-12, OPG, BGP, chitotriosidase, bone imaging parameters assessed with two different techniques (QUS and DXA) and MRI data were estimated at baseline (T0) and after two years on ERT.
Results: Chitotriosidase, MIP-1a, and IL-6 levels decreased in all patients after two years of ERT (p =0.05). In contrast, OPG and BGP levels increased (p =0.04 and p =0.02, respectively). Bone mineral density (BMD) demonstrated a progressive improvement with regards to the Z-score in all patients (p =0.05). The decrease in the plasma levels of MIP-1a strongly correlated with a decrease in the plasma levels of chitotriosidase. Additionally, decreased plasma levels of IL-6 were correlated with increased Z-score both at baseline (T0) as well as two years later, in all patients. There was no correlation between MRI findings and any inflammatory biomarker.
Conclusions: Measurement of serum markers in patients with GD under ERT could be used as an auxiliary tool in the monitoring of bone involvement, in combination with MRI imaging and BMD. However, larger studies involving higher numbers of GD patients are needed to confirm these conclusions. Hippokratia 2016, 20(2): 153-159

Gaucher disease (GD) is the most common lysosomal storage disorder, known to be inherited in the autosomal recessive way1,2.It is caused by the deficiency of glucocerebrosidase leading to accumulation of glucosylceramide3-5.

Common clinical symptoms and manifestations include hepatomegaly, splenomegaly, hematological and various skeletal complications, whereas in the neuronopathic forms neurological complications of different severity and rate are also present. Almost all GD patients develop skeletal complications, consisting mainly of bone remodeling failure, osteopenia, osteoporosis, osteolytic lesions of various size, Ehrlenmeyer’s flask deformity, marrow infiltration and avascular necrosis. Substantial progress has been performed the last decade on the pathogenesis of bone changes in GD, which is currently attributed to multiple factors. Such factors include vascular compression due to increased intraosseous pressure, metabolic disturbance with increased bone resorption, cytokine and chemokine enhancement of osteoclast function, macrophage-derived factors’ effects, as well as interactions between Gaucher cells, osteoclasts, osteoblasts and mesenchymal cells6-9. Imaging methodologies for the evaluation of skeletal involvement are currently employed and provide accurate evaluation and staging of bone lesions in GD10. Practical limitations and increased costs of these imaging procedures have initiated the investigation of the use of biochemical markers for evaluation of osseous involvement11.

Because Gaucher cells release proinflammatory cytokines and tartrate-resistant acid phosphatase, it has been hypothesized that complications result from a high turnover rate combined with high macrophage-mediated osteoclastic bone resorption8. However, reports studying biochemical markers of bone turnover have given variable results so far.

We performed a prospective study in a case-series of GD patients from Northern Greece under long-term ERT to investigate treatment effects on bone mineral density (BMD), biochemical marker levels and magnetic resonance imaging (MRI) findings, as well as possible relationships between them.

Seven GD type I patients (three males and four females) on ERT were enrolled in this prospective study. The diagnosis of GD was confirmed by demonstration of deficient glucocerebrosidase activity and genotyping. Mean age was 26.29 ± 15.34 years (range 7–47 years). Six patients were receiving ERT with 40-60 IU/kg of imiglucerase weekly for a mean period of 36 months prior to their enrollment in the study, while one patient started ERT after his inclusion.

BMD was measured using a dual-energy X-ray absorptiometry (DXA), technique using Cronos® bone densitometer (DMS, France) at two sites: the lumbar spine vertebrae (L2–L4) and the left proximal femur. For adult patients (older than 20 years) Z-score values were directly acquired from the scanner output, while for those aged 7 to 20 years the parameter was calculated normalizing crude BMD using the standard population proposed by Kelly et al15.According to the guidelines of the International Society of Clinical Densitometry (I.S.C.D.) a Z-score ≤2.0 was considered abnormal16,17. At the lumbar site, BMD was measured at the second, third and fourth lumbar vertebrae and the mean value expressed as grams per square centimeter (BMDs, g/cm2). At the proximal femur, BMD was measured at the femoral neck and the total hip. Results were also expressed as grams per square centimeter square (g/cm2). Z-scores were calculated based on BMD measurements of a normal age- and sex-matched Caucasian population18.

Quantitative ultrasound (QUS) is a bone health assessment technique, grown popular in recent years since its introduction in 1984. Compared to DXA, QUS is more widely accessible because of a portable device, low cost, and absence of ionizing radiation19. This technology has been used to determine the bone health status of women, men, children and, in certain cases, infants8. The ultrasound is a type of sound wave with a frequency exceeding the normal auditory range of humans (>20 kHz), while the frequency used in QUS usually lies between 200 kHz and 1.5 MHz19,20.

QUS measurements were performed using Omnisense® 7000 P (Sunlight Medical Ltd, Tel Aviv, Israel), equipped with a handheld probe, specifically designed to assess the axial speed of sound (SOS) along the surface of peripheral bones. Two sites on the non-dominant side were assessed: the distal third of the radius (SOSR) and the midshaft of the tibia (SOST). Calibration of the device was carried out on a daily basis using the manufacturer’s verification phantom, whereas repeatable positioning of the probe was achieved by the use of simple measuring gauges as instructed by the manufacturer of the device. Z-scores for SOS values were calculated according to normative data derived from a normal sex- and age-matched Greek population20.

Measures of QUS, as well as MRI of bones -representing bone marrow infiltration-, were investigated in this group of patients at baseline (T0) and subsequently two years later, and so was the relationship between these parameters.

The authors obtained ethical approval from hospital’s Bioethics Committee (protocol number 91, 1/6/2010). In addition, consent was obtained from all study subjects or their parents/legal representatives before study entry.

All seven patients in this case series presented with a GD1 phenotype and were free of neurological signs. However, only five of them carried the common “neuroprotective” N370S mutation in homozygosity. One patient carried two heterozygous disease-causing mutations (N409S/L483P), and the seventh patient carried the L444P mutation in homozygosity – presenting, however, with a GD1 neurological-free phenotype. All patients had developed skeletal complications, consisting mainly of osteopenia and marrow infiltration. These changes predominantly affected long bones and the vertebrae. Failing of remodeling of the distal femora producing the characteristic “Erlenmeyer flask” appearance, a common skeletal abnormality in patients with GD, was already present in four patients of the cohort before initiation of ERT, while none of them developed additional skeletal complications while on ERT. 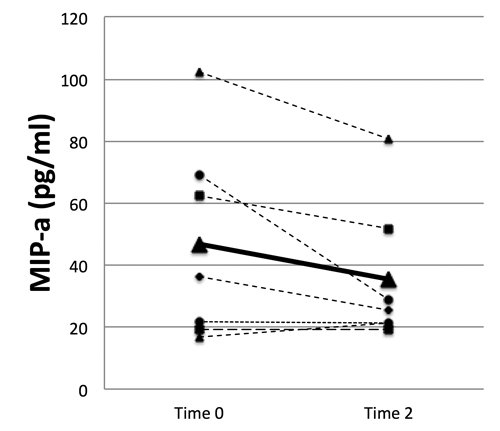 Figure 1: Plasma levels of macrophage inflammatory protein (MIP)-1a were decreased in all patients after two years of enzyme replacement therapy. 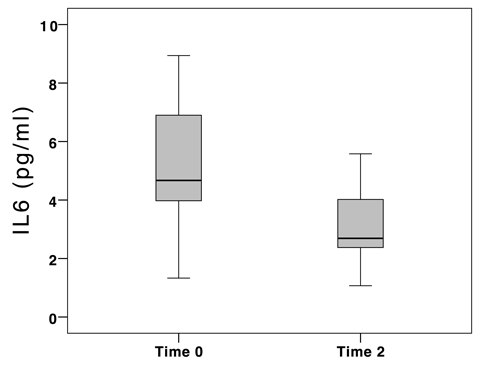 Figure 2: Plasma levels of Interleukin-6 were decreased in all patients after two years of enzyme replacement therapy. 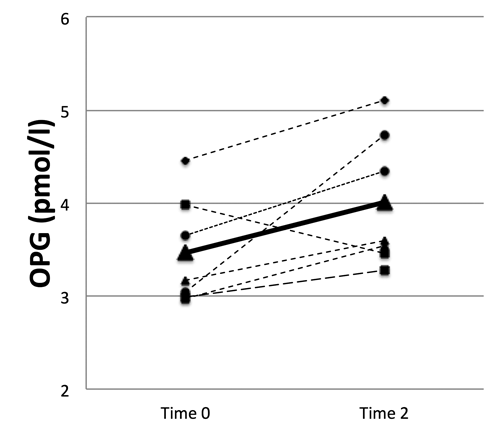 Figure 3: Plasma levels of Osteoprotegerin (OPG) were increased in all patients after two years of enzyme replacement therapy. 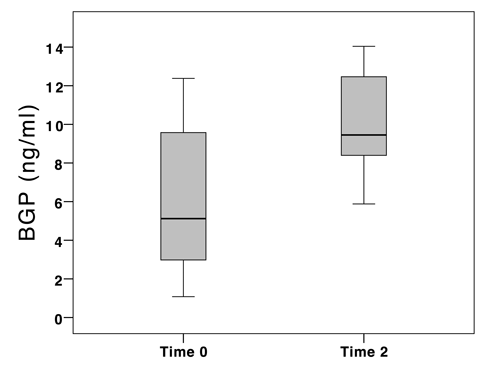 Figure 4: Plasma levels of Osteocalcin (BGP) were increased in all patients after two years of enzyme replacement therapy. 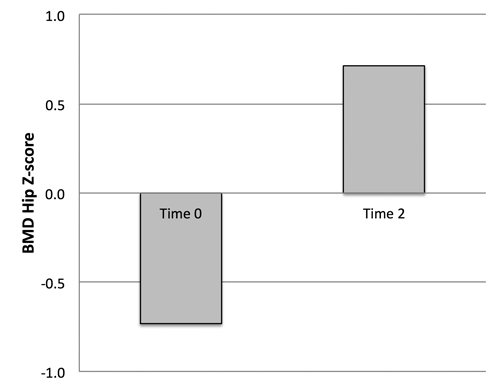 Figure 5: Bone mineral density (based on Z-score) showed a progressive improvement in all patients after two years of enzyme replacement therapy. 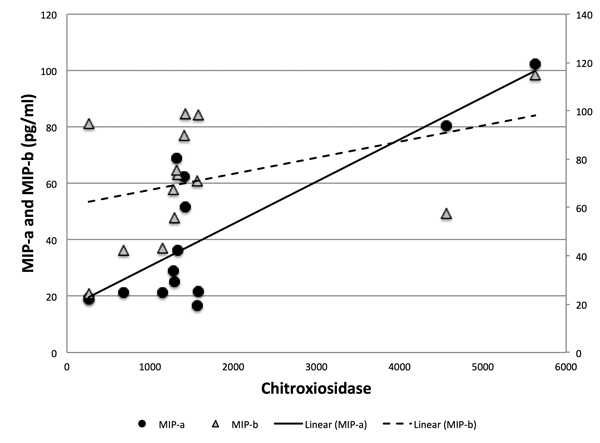 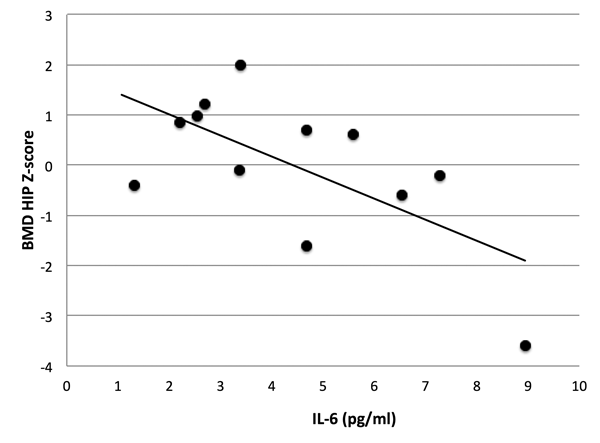 Figure 7: Decreased plasma levels of Interleukin-6 were strongly correlated with increased Z-score, in all patients, after two years of enzyme replacement therapy.

GD is a lysosomal storage disorder affecting multiple organ systems1,2. Bone involvement in GD is known to be frequent. According to existing literature, it occurs in approximately 75 % of GD type 1 patients21,22.Pathophysiologically, bone marrow is infiltrated by lipid-laden macrophages, called Gaucher cells21,22.The skeletal manifestations of GD include a variety of bone pathologies due to the progressive glucocerebroside storage, changes of vascularity, and impaired bone remodeling. Bone manifestations in GD include bone infarcts, avascular bone necrosis, cortical thinning, lytic bone lesions, osteosclerosis, fractures due to osteopenia or osteoporosis22. Under ERT these pathologies are, at least, partly reversible22-24.Evaluation of response to enzyme replacement requires accurate, rapid and non-invasive monitoring of disease activity11,22,25-26. Changes in osteoclast and osteoblast activity can be measured by markers of bone metabolism. Different markers of bone turnover have been evaluated in patients on ERT11,22,25-26. These changes seem to be reversible after initiation of ERT due to an increase in bone formation and a decrease of bone resorption26,27.

With regards to the underlying pathology, GD is regarded as a chronic inflammatory disorder, with macrophages producing proinflammatory cytokines that could promote bone resorption. Several clinical manifestations, such as gammopathies, predisposition to infections, and lymphoid malignancies, suggest a more diverse dysregulation of the immune system, lying beyond the macrophage6,7,29-30.Previous studies have evaluated changes in several enzymatic biomarkers and newly-described chemokines6,7,29-30. These changes may explain the chronic inflammatory reaction and the increased incidence of lymphoid malignancies that have been repeatedly reported among GD patients, and seem to be reversible after initiation of ERT6,7,29-30.In particular, variable elevations of proinflammatory cytokines IL-6, IL-8, IL-1, osteoclast-activating cytokines such as macrophage inflammatory protein-1, and anti-inflammatory cytokines and factors such as IL-10 have been reported. Various investigations revealed that plasma levels of the chemokines MIP-1a and MIP-1b are markedly increased in GD patients. Particularly plasma MIP-1b levels tend to be higher in untreated patients with skeletal disease compared to untreated patients without skeletal disease8,31.In patients under ERT therapy, the plasma levels of MIP-1b have been reported to be lower after some years of therapy31. The most consistent finding is a difference in osteocalcin levels between patients who experienced bone complications and those who did not8.

In the present study, serum chitotriosidase activity, MIP-a and IL-6 levels were decreased in all GD patients. Other biochemical markers such as OPG and BGP levels were increased in all patients after two years of ERT therapy. Decreased plasma levels of both MIP-1a and chitotriosidase were strongly correlated. Additionally, decreased plasma levels of IL-6 were strongly correlated with increased Z-score, in all GD patients. Bone mineral density showed a progressive improvement in all patients after two years of ERT based on the Z-score. No correlation was found between QUS measurements and studied markers in GD patients under ERT.

Limitations of the current study are the small number of patients, as well as the fact that six out of the seven patients were already on ERT at baseline – probably not allowing the observation of most prominent alterations of the biomarkers studied. Future research should be addressed at larger GD cohorts and focus on the applications and usefulness of biomarkers in the evaluation of osseous tissue response to specific treatments in patients with GD.

The present study was funded by Genzyme. In addition, EV, ME and DIZ have received travel and research grants from Genzyme.