Background: Carotid artery stenting (CAS) is an alternative to carotid endarterectomy for the prevention of stroke and transient ischemic attack (TIA). The high long-term mortality among patients who underwent CAS seems to be related to the high comorbidity burden, including coronary and peripheral artery disease. However, limited data on very long-term mortality (over four years) and predictors of death are available.
Aim: We sought to investigate the very long-term survival after CAS and the impact of comorbidities on mortality at follow-up.
Methods: Data of 194 symptomatic and asymptomatic patients who underwent CAS with cerebral protection systems from December 2002 to March 2014 were analyzed. All cause mortality during long-term follow-up was assessed. Univariate and multivariate Cox regression analysis was used to find independent predictors of death.
Results: The median age of patients was 66 [interquartile range (IQR): 60-73] years and 78.9 % of patients were male. The median follow-up was 7.6 (IQR: 4.4-10.2) years. The all-cause mortality rate after 30 days, one year, four years, and at maximum follow-up was 0 %, 5.1 %, 17.5 % and 31.4 %, respectively. Out of 61 deaths, 37 (60 %) were cardio-cerebral vascular related deaths, 15 (25 %) non-cardiovascular deaths, and 9 (15 %) due to unknown reasons. Among cardio-cerebral vascular deaths, there were 12 fatal strokes, 18 fatal myocardial infarctions and seven other cardiac related deaths. Non-cardiac deaths were due mainly to cancer (9/15). Age and diabetes mellitus were independent predictors of all-cause death during long-term follow-up.
Conclusions: The mortality rate during short and long-term follow-up after CAS was lower than reported in the literature. Age and diabetes mellitus were independent predictors of all-cause death. Further research is needed to confirm the potential association between those risk factors and decreased survival. Hippokratia 2016, 20(3): 204-208.

Carotid artery atherosclerosis is associated with around 10-20 % of all ischemic strokes1,2. Other major risk factors for stroke include advanced age, arterial hypertension, hyperlipidemia, diabetes, tobacco use, atrial fibrillation, coronary artery disease (CAD) and other heart and cerebrovascular diseases3.

Previous trials showed benefits of carotid endarterectomy (CEA) over medical therapy4. Carotid artery stenting (CAS) has evolved to be an alternative to CEA for the treatment of carotid stenosis in high-volume centers with low rates of stroke or death.

In long-term follow-up, high mortality among patients who underwent CAS seems to be related to the high comorbidity burden, including pulmonary and heart diseases5. However, still limited data are available on long-term mortality (over four years) and predictors of death after CAS.

This study aimed to assess the survival rate after CAS and the impact of risk factors on mortality during long-term follow-up.

We retrospectively collected data of 194 consecutive patients with symptomatic and asymptomatic carotid artery stenosis who underwent CAS from December 2002 to March 2014 at the department of Cardiology and Cardiovascular Interventions, of the University Hospital, at Krakow, Poland. Symptomatic patients were defined by either recent (within the last six months) ischemic stroke or transient ischemic attack (TIA). Duplex ultrasound was performed in all patients to evaluate the significance of carotid artery stenosis. CAS was performed in symptomatic and asymptomatic carotid stenosis according to the guidelines valid at the time of procedure3. All patients had been qualified for CAS after vascular surgeon’s and neurologist’s consultations, due to the high surgical risk and/or the absence of patient’s consent to CEA. The study excluded patients with restenosis after previous carotid interventions. Ethics approval was not necessary due to the retrospective observational character of the study, with patients receiving the standard therapy as recommended by national guidelines.

All patients underwent coronary angiography before CAS to identify the possible presence of CAD. In the case of critical lesions, percutaneous coronary revascularization was performed. Embolic protection devices (EPD) for cerebral protection have been used in all patients during CAS.

Clinical follow-up as control visits at the outpatient clinic or as telephone consultation was carried out at one, six, and 12 months, and yearly from hospital discharge. All-cause mortality during long-term follow-up was assessed. Information on date of death was obtained from the Polish National Health Fund.

Results were presented as percentages of patients or medians (interquartile ranges in brackets) where applicable. Differences between patients alive or dead (all causes) at follow-up were assessed using Chi-square test and Fisher’s exact test for dichotomous variables and Mann–Whitney U test for continuous variables. Survival analyses were performed using Kaplan-Meier method and univariate and multivariate Cox regression analysis was used to find independent predictors of all-cause mortality at follow-up. All baseline characteristics variables (Table 1) were tested as possible covariates. Results are presented as hazard ratios (HR) with 95 % confidence intervals (CI). All tests were two-tailed and a p-value <0.05 was considered statistically significant. All analyses were performed with the Statistical Package for Social Sciences (SPSS) statistical software, version 15.0 (SPSS Inc., Chicago, IL, USA).

Out of 61 deaths, 37 (60 %) were cardio-cerebral vascular related deaths, 15 (25 %) non-cardiovascular deaths, and 9 (15 %) due to unknown reasons. Among cardio-cerebral vascular deaths, there were 12 fatal strokes, 18 fatal myocardial infarctions, and seven other cardiac related deaths. Non-cardiac deaths were due mainly to cancer (9/15) (Table 2).

In Cox regression analysis, both age and diabetes mellitus were identified as independent predictors of all-cause death during follow-up (Table 3). Kaplan-Meier curve for survival is shown in Figure 1. 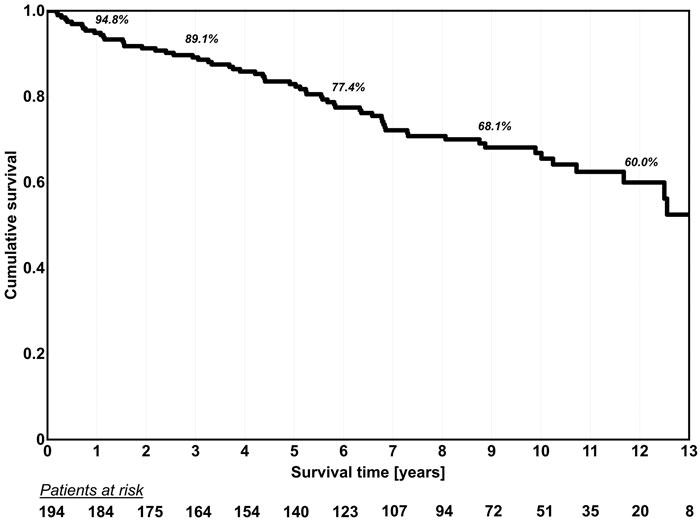 The mortality rate during long-term follow-up indicates that patients undergoing CAS are high-risk patients with high comorbidity burden. The coexistence of carotid and coronary artery disease adds complexity to the treatment decision and aggravates the prognosis6,7. This study reports 12.9 % (18+7/194) cardiac related deaths and 5.7 % (12/194) cerebral related deaths, which confirm the unfavorable prognostic influence of CAD during the follow-up.

The 30-days all-cause mortality rate after CAS in previous studies varies, with the values ranging between 0.65 and 1.9 %5,8-12. On the contrary, no deaths within 30 days from CAS were noted in this study.

During long-term follow-up, the SAPPHIRE trial reported all-cause death to be 18.6 %, of which cardiac 9.0 % and neurological 1.8 % at three years, whereas the CREST trial reported to be 11.3% at four years study period in both symptomatic and asymptomatic patients8,13. In another big registry, the mortality rate was 1.9 % during the periprocedural period, 7.4 % at one year and 17.3 % at a median follow-up of 2.4 years5. The three leading causes of deaths were infections, cardiovascular diseases, including myocardial infarction and heart failure, and ischemic cerebral vascular disease in the third position. The same registry found that advanced age, diabetes mellitus, malignancy and heart failure are significant risk factors for mortality5.

The current study revealed a mortality rate of 5.1 %, 17.5 %, and 31.4 % at one year, four years, and maximum follow-up time (median 7.6 years), respectively. Cardio-cerebral vascular causes accounted for the majority of deaths (19.1 %). Non-cardiac deaths were caused mainly by cancer and pulmonary diseases. Between 30 days and one year, myocardial infarction was the most frequent cause of death, accounting for mortality 3.1 % (6/194), whereas stroke-related death occurred in only 1% (2/194).

Other large trials, like the EVA-3S, ICSS, and SPACE including only symptomatic patients reported higher mortality rates11,14,15. A large retrospective study reported 1.7 % mortality rate within 30 days and 32 % at a mean follow-up of two years. High mortality rate was observed especially in elderly, symptomatic, and in high surgical risk patients16.

A large number of single and multi-center registries had analyzed the outcomes after carotid revascularization. However, these registries have many limitations, such as the variable levels of operator experience, and various definitions of adverse events17.

Other smaller registries with similar cohort size reported a 3.7 % death rate after a median follow-up of one year and 25 % after four years18,19.

Previous studies showed that advanced age (>75 years) is an independent predictor of death after CAS20-22. The analysis of a prospective multicenter registry after CAS showed that age and diabetes were predictors of the 30-day incidence of any stroke and death23. The current study also identified age and diabetes mellitus as independent predictors of all-cause death during long-term follow-up.

The results of meta-analyses of randomized trials on CAS versus CEA indicate that the risk of mortality during short and long-term follow-up is still significant. However, the results of these trials are conflicting, probably due to the differences in patients’ populations, the variability of the use of EPD, the use of different endpoints and the variation of operator’s experience17.

New strategies and ongoing management of risk factors should be considered for reducing late mortality in patients after CAS.

The current study has some limitations. Firstly, it has all the limitations inherent to single-centre registries. Secondly, between 2002 and 2010, the CAS procedures were performed according to previous guidelines. Thirdly, despite huge efforts and access to the database of the Polish National Health Fund, the cause of death for nine patients remained unknown.

The mortality rate during short and long-term follow-up after CAS was lower than reported in the literature. We found a mortality rate of 5.2 % at one year and 31.4% at 7.6 years of follow-up in 194 consecutive patients after CAS. Myocardial infarction was the most frequent cause of death and malignancy was the main cause of non-cardiac deaths during the follow-up. Age and diabetes mellitus were the only independent predictors of all-cause death. Further research is needed to confirm the potential association between those risk factors and decreased survival.