Background: Intravesical migration represents an uncommon complication of intrauterine device (IUD) insertion. We present the case of an IUD that migrated to the urinary bladder, causing significant sexual complaints. Case report: A 38-year-old woman presented with complaints of gradually evolving dyspareunia and recurrent urinary tract infections during the past 12 months. She reported an IUD insertion 18 months before. Further detailed evaluation revealed disorders in all sexual domains. Imaging and cystoscopy detected the presence of IUD in the urinary bladder. Under anesthesia, the IUD was removed out of the bladder without any complications. In her follow-up evaluation after six months, her sexual function was significantly improved and she had no urinary symptoms. Conclusion: Sexual difficulties in a woman with an IUD should raise the suspicion of device dislodgement or dislocation. Hippokratia 2016, 20(1): 70-72

Intrauterine device (IUD) is the most widely used reversible way of contraception worldwide1. However, a vast variety of complications associated with IUD use has been encountered, ranging from discomfort after device placement to severe allergic reactions and death1. In the literature, at least 40 cases of IUD migration to the urinary bladder have been reported during the last ten years2-8. We report a case of intravesical migration of a Copper IUD, causing significant sexual complaints.

A 38-year-old married woman presented to the outpatient clinic, complaining of gradually evolving dyspareunia during the past 12 months. She also reported episodes of lower urinary tract infection (UTI), with severe suprapubic pain, urge, and mild macroscopic hematuria as main symptoms, treated with antibiotics. Nothing remarkable was noted in her past medical history. According to her medical records, a Copper IUD had been inserted 18 months before as contraceptive method, due to her husband’s latex allergy.

In her sexual history, she complained of significant pain during penetration that ceased at the end of coitus while further evaluation showed low sexual desire and reduced lubrication, orgasms, and satisfaction. A decrease in frequency of sexual intercourses was also noted. Compared to 10 to 15 monthly intercourses one year earlier, she reported two sexual intercourses during the previous 30 days. When we evaluated her sexual functioning using the Female Sexual Function Index (FSFI)9, she had a total FSFI score of 19.5, with a score below 26.55 indicating sexual dysfunction. FSFI results showed a complete pattern of sexual dysfunction, as all domains were pathological, further confirming her complaints.

The physical and pelvic examination did not reveal any significant findings, except for a mild tenderness at the deep palpation of the suprapubic area. Urine analysis showed 6-7 leukocytes and 10-12 erythrocytes per high power field. A plain frontal supine radiograph of the abdomen confirmed the presence of the IUD in the lesser pelvis. Pelvic ultrasonography demonstrated an elongated echogenic mass, with size 1.5 cm inside the urinary bladder (Figure 1). During cystoscopy under anesthesia, the IUD was found embedded in the posterior bladder wall and was removed with endoscopic forceps (Figure 1). Careful inspection of the bladder revealed a small perforation at the posterior wall, where IUD was found embedded. In order to manage the bladder perforation, an indwelling, transurethral Foley catheter was placed. The postoperative period was uneventful, and the patient was discharged on the third postoperative day. In her follow up evaluation after six months, she remained asymptomatic with no further UTI episodes. A significant improvement of sexual functioning was reported, confirmed by normal FSFI scores. 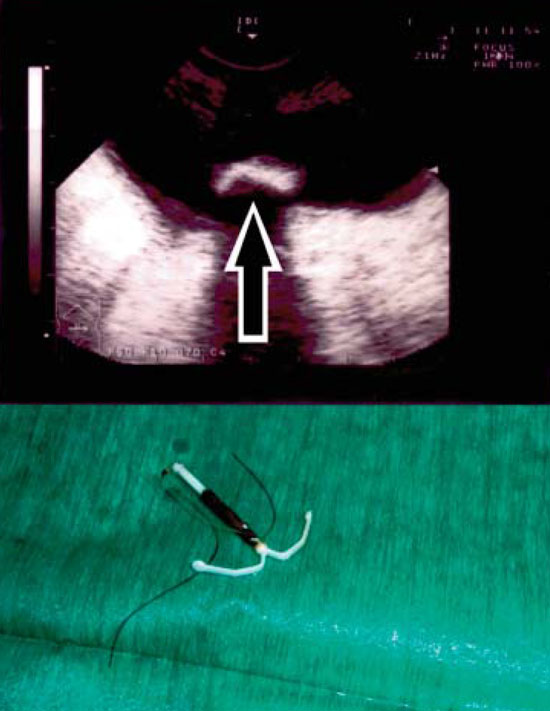 Figure 1: Top: pelvic ultrasonography revealing an echogenic foreign object (arrow) in the bladder, Bottom: the intrauterine device after its endoscopic removal from the bladder.

The usual symptoms of intravesical migration of an IUD comprise pelvic or loin pain, hematuria, dysuria, frequency and recurrent UTIs10. Perforations are diagnosed at the time of, or long after the insertion of the device1, with their frequency ranging from 0.003 to 0.87 %11. However, there is a significant number of asymptomatic and thus, undiagnosed perforations12. The mechanisms and causes of these perforations also vary. Type of the device, false inserting technique, inexperience, anatomic issues of the female reproductive system (such as an extreme posterior uterine position) and slow migration of the IUD through the wall of the uterus may be responsible for the dislodgment1. Whatever the reasons may be, migrated IUDs that are symptomatic, and all Copper IUDs (due to inflammation they produce)12 that have perforated the uterine wall, must be removed1,12. Migrated IUDs can be removed either endoscopically, laparoscopically or with open surgery, depending on specific findings and patient’s general condition.

In the reported case, sexual complaints in the form of severe dyspareunia were the main symptoms that she developed few months following the insertion of the device. Interestingly further sexual evaluation revealed an impairment of all sexual domains and significantly reduced frequency of sexual attempts. Dyspareunia has been reported as a symptom of IUD migration to the bladder in the literature7,8, but in our case, it represented the leading symptom, possibly due to its severity.

There is insufficient literature available regarding the pathogenesis of dyspareunia caused by intravesical IUD migration, but one could assume that the inflammatory mechanisms implicated in chronic pelvic pain syndrome could also participate in the development of sexual pain disorders. Nevertheless, sexual pain disorders, such as dyspareunia and/or vaginismus have been proved to secondarily reduce sexual desire, impair arousal, and orgasm and cause sexual dissatisfaction in female sufferers13.

Urinary tract symptoms usually dominate the clinical presentation of a female patient with an IUD migrated to the bladder. However, sexual history can reveal sexual complaints that are usually undetected as women are embarrassed to report them or do not consider them clinically significant. At the same time, physicians do not routinely screen for sexual disorders. The link between recurrent urinary tract infections and dyspareunia has been recently shown by Salonia et al, mainly in the form of provoked vestibulodynia14. In the presented case, the patient clearly reported dyspareunia apart from the recurrent UTIs, however, the detailed sexual evaluation and use of a validated questionnaire revealed the impairment in all sexual domains.

Thus, physicians treating women with migrated IUDs that cause pelvic pain and lower urinary tract symptoms should further assess their sexual health status. A simple question screening for dyspareunia/vaginismus can reveal the presence of these easy-to-recognize symptoms. A more detailed sexual evaluation should then follow to determine whether secondary disorders of sexual desire and arousal, orgasm, and satisfaction co-exist. To further assist physicians in approaching and evaluating sexual function, several models, and various tools have been developed, such as the ALLOW and PLISSIT models, and the FSFI and Female Sexual Distress Scale (FSDS) questionnaires15,16.

In the reported case, dyspareunia and lower urinary tract symptoms were the leading complaints of an intravesical migration of an IUD. Dyspareunia is caused by various organic and psychological factors. Along with all the already known symptoms, a rapid or progressive development of sexual disorders in a woman with an IUD should raise the suspicion of dislodgement or dislocation of the device that requires careful evaluation.

This paper was presented in the 17th Congress of The European Society for Sexual Medicine (ESSM) and was awarded the 2nd Best Case in “Cases that Matter” session sponsored by Eli-Lilly, in February 2015, in Copenhagen, Denmark.