Case description: A 24-year-old male patient, diagnosed with pre-B ALL, was admitted in our hospital due to severe lumbar pain. After reviewing laboratory, radiological and clinical findings, the patient was diagnosed as having relapse of a mixed phenotype acute leukemia, according to bone marrow aspiration (9% blasts) and cytogenetic analysis, with multiple osteolytic lesions in all lumbar vertebrae, sacrum and ilium and severe hypercalcemia (13.3 mg/dL). Thus, FLAG-IDA rescue therapy and hydration plus furosemide, corticoids and bisphosphonates were administered. Despite initial amelioration, his hematological condition deteriorated and he died due to severe sepsis as a result of severe immunosuppression.

Conclusion: Two possible mechanisms have been suggested for hypercalcemia in hematological malignancy, either the leukemic infiltration or the paraneoplastic production of a variety of humoral factors and proinflammatory cytokines. However, hypercalcemia and severe osteolytic lesions are rare features in ALL adult patients and their combination may be indicator of poor prognosis. Hippokratia 2015, 19 (1): 78-81.

Acute lymphoblastic leukemia (ALL), being the most common malignancy in children, is a relatively rare neoplasm in adults. ALL is more common in men than in women and about 10,000 new cases are diagnosed in Europe each year, which represents about 15% of leukemias in adults. Its diagnosis can be established when the bone marrow examination reveals a lymphoid blast cell content in excess of 20% of total cellularity. Precursor B ALL (pre-B ALL) is defined by the positive reaction (>20%) for any two of the earliest B-lineage markers (CD19, CD79a, CD22) or plus CD10 antigen with additional identification of cytoplasmatic IgM (cytIgM)1.

Hypercalcemia and severe osteolytic lesions are rare complications of ALL in childhood and adolescence and these cases are suggested to share similar clinical features, such as age (10-20 years) and normal white cell count with absent or rare circulating blasts2. In contrast, hypercalcemia in adults is often presented in hematological malignancies, such as multiple myeloma or adult T-cell lymphoma/leukemia but it is a rare feature in adult ALL. Paraneoplastic production of a variety of humoral factors and proinflammatory cytokines have been shown to be involved in osteoclastic bone resorption causing hypercalcemia in malignant disorders, such as parathyroid hormone related protein (PTHrP), prostaglandin E2, tumor necrosis factor (TNF)-a, TNF-b, interleukin (IL)-1b and IL-63.

We report the case of a 24-year-old male patient with relapsed pre-B ALL who developed multiple osteolytic lesions and hypercalcemia and we discuss their possible underlying mechanisms.

A 24-year-old male patient, who had been diagnosed with pre-B ALL (May 2010), was admitted in our hospital due to severe lumbar pain (December 2012). During his initial diagnosis, the patient had undergone 8 cycles of the intensive chemotherapy regimen Hyper-CVAD (cyclophosphamide, vincristine, adriamycin, and dexamethasone, alternately with methotrexate and cytarabine) and intrathecal infusions of alternately methotrexate and cytarabine. Since an HLA-compatible donor could not be found, maintenance chemotherapy was administered [mercaptopurine per os 75 mg/m2 daily, vincristine Intravenous (iv) 2 mg monthly, prednisolone iv 4 mg for five days per month, methotrexate iv 20 mg/m2 per week], followed by complete remission for twenty three months (January 2011 to December 2012). His medical history, was also remarkable for bilateral avascular necrosis of the femoral head (May 2011) detected by computed tomography scan and resulting in discontinuation of corticosteroids and for hospitalization (May 2012) for lower respiratory tract infection (Table1). 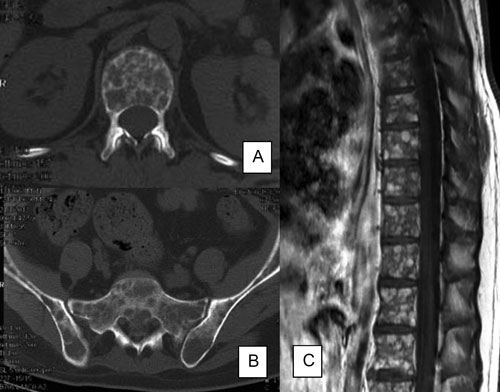 After reviewing laboratory, radiological and clinical findings, we diagnosed our patient as having relapse of mixed phenotype acute leukemia with multiple osteolytic lesions, hypercalcemia and mild renal function deterioration. The patient had neither lymphadenopathy nor organomegaly, but only severe lumbar pain. Thus, FLAG-IDA (fludarabine, aracytin, G-CSF, idarubicin) rescue therapy due to relapse and the phenotypical conversion of ALL, and hydration plus furosemide, corticoids and bisphosphonates for hypercalcemia, were administered. After six days, the calcium level was normalized and accompanied with amelioration of his renal function and alleviation of the painful symptoms. One month after the first cycle of FLAG-IDA, he exhibited a second event of hypercalcemia and relapse of ALL with the same features as previously described, and he received the same treatment (second cycle of FLAG-IDA) (Figure 2). Nonetheless, his general condition was deteriorated by developing bilateral meralgia paresthetica and he died soon after the episode due to severe sepsis.

Figure 2. Calcium and serum creatinine levels of the 24-year old male patient, with relapsed precursor B acute lymphoblastic leukaemia, during his hospitalization.

Osteopathy, including bone pain and pathologic fracture, is certainly one of the most common initial symptoms of ALL mainly in children and adolescents, but multiple osteolytic lesions are limited2,4. Generally, hypercalcemia is a common complication of adult patients with cancer and two possible mechanisms for the elevated serum calcium levels have been suggested.

The first mechanism is local osteolytic hypercalcemia due to osteolytic skeletal metastases and possible cytokine involvement. In multiple myeloma or adult T cell leukemia/lymphoma, the primary mechanism of hypercalcemia is increased osteoclastic bone resorption by tumor cells (leukemic infiltration) in combination with local bleeding and osteonecrosis of the adjacent bone structures5.

The second suggested mechanism in hematological malignancy is the paraneoplastic production of humoral factors, mainly PTHrP6, vitamin-D-like sterols7, prostaglandin E28, TNF-α9, and IL-610. In the reported case, serum PTH and 1,25(OH)2D were below the normal ranges due to hypercalcemia but also PTHrP level was normal. Cytokines were not determined because of the aforementioned reports, and the lack of a specific and reliable bioassay for their detection. Therefore, the cause of hypercalcemia in our case remains unexplained.

However, cause and result of hypercalcemia could be renal failure. In hypercalcemia in malignancy, hypercalciuria is caused by increased calcium in the glomerular filtrate, although renal calcium’s reabsorption is increased. Since kidney is the major excretory organ for calcium, it could inappropriately retain the large calcium load, which results from accelerated bone resorption11. Our patient developed hypercalcemia accompanied by mild hyperphosphatemia. A possible mechanism of induced renal failure could be the deposition of calcium in the kidney secondary, because of an increase in the calcium-phosphorus product.

Besides hypercalcemia, cytogenetic abnormalities and expression of myeloid antigens (CD11b, CD13, and iMPO) by blast cells were evident at relapse of pre B-ALL. This phenotypical conversion from pre B-ALL to leukemia with myeloid features is known as a lineage switch. This condition is now defined as mixed phenotype acute leukemia (MPAL), according to WHO Classification of Tumors of Hematopoietic and Lymphoid Tissues, 200812. Very early hemopoietic progenitor cells are possibly involved in the origin of MPAL with the potential to undergo either on myeloid or on lymphoid differentiation. MPAL is more frequent in adults. Although, the prognosis of ALL with multiple osteolytic lesions or hypercalcemia alone is debatable, when combined with adulthood, aberrant cytogenetics, and MPAL it is undoubtedly poor.