Hypopharyngeal fibrovascular polyps are rare and usually indolent benign tumors until reaching a large size with possible aspiration and asphyxia in extreme cases. Only four such tumors larger than 15 cm originating in the hypopharynx and just one regurgitated in the oral cavity without any previous specific symptoms are reported1-3.

The diagnosis is made by clinical examination, endoscopy, and computed tomography or magnetic resonance imaging scans for determining the origin, content of the mass, and feeding vessels. Surgical removal can be achieved using a transoral, transcervical, or endoscopic approach, depending on the size, location, and structure of the tumor. Endoscopic removal of giant polyps is now feasible1-3.

We present a case of oligosymptomatic hypopharyngeal fibrovascular polyp protruding from the mouth, which is the largest reported such tumor. A 66-year-old man was admitted to the Otolaryngology department with a pendulous mass protruding four cm from his mouth that appeared during a forced cough episode. The patient did not report any previous significant respiratory distress, except for slight swallowing difficulty. Computed tomography showed a well-circumscribed mass, with fat density in the center, which started from the posterolateral left hypopharyngeal wall, filling hypopharynx, oropharynx and oral cavity. Under general anesthesia, the tumor was removed completely endoscopically. The mass measured 17 x 3 x 3 cm, and the stalk was 1.5 cm in length (Figure 1). The histopathological diagnosis was a fibrovascular polyp. The postoperative course was uneventful. 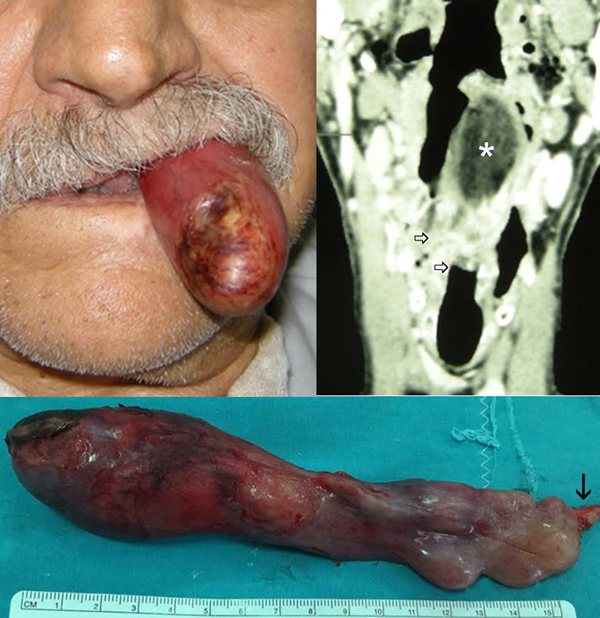 Giant fibrovascular polyps are extremely rare, with only a few cases described. It is crucial to estimate the size of the airway and to perform adequate preoperative investigations to identify the pedicle’s origin before planning the surgical approach and treatment.