Objectives: Capsule endoscopy (CE) remains the examination of choice for the investigation of obscure gastrointestinal bleeding. Although the factors predicting positive CE findings in the overall obscure gastrointestinal bleeding have been investigated, the clinical characteristics that predict a positive CE in patients with past overt obscure gastrointestinal bleeding (OOGIB) have notbeensystematically studied.
Methods: Between September 2004 and December 2013, 262 patients underwent CE for evaluation of past OOGIB after negative upper and lower endoscopy, and other diagnostic modalities. Patients’ records were retrospectively reviewed to assess the factors that could possibly predict positive CE findings.
Results: Two hundred and twenty four patients with a median age of 70 years (range: 17-87) were enrolled in the final analysis and were divided into two groups; those who had positive (group A: 118 patients) and those who had negative CE findings (group B: 106 patients). The overall diagnostic yield of CE was 52.68 %. Multivariate analysis demonstrated that age >65 years, anticoagulant use, antiplatelet use, and non-steroidal anti-inflammatory drugs use were independent predictive factors for positive findings on CE. Of the 118 patients with positive CE, therapeutic interventions were performed in 56 patients (47.46 %). Recurrence of bleeding presented in nine patients of group B compared with 39 patients of group A (p <0.001).
Conclusions: Certain clinical characteristics predict a positive CE in patients with past OOGIB. Patients with OOGIB and negative CE had a considerably lower rebleeding rate, and further invasive investigational procedures may be adjourned or may not be required, though such recommendation warrants further validation. Hippokratia 2016, 20(2): 127-132

Past overt obscure gastrointestinal bleeding (OOGIB) comprises about 5 % of all obscure gastrointestinal bleeds. It represents a significant economic burden with multiple studies attempting to optimize investigational algorithms through cost-effectiveness analyses. Moreover, it is a diagnostic challenge for all clinicians1. OOGIB has been defined as the passage of visible blood (melena or hematochezia) that recurs or persists despite negative initial endoscopic and radiologic estimations and is classified as active (ongoing) and past (inactive) gastrointestinal bleeding2,3. Recently4, the former term referred to as obscure gastrointestinal bleeding (OGIB) was reclassified as small bowel bleeding. This change in terminology mainly reflects the decisive effect of advances in small bowel imaging [including capsule endoscopy (CE), deep enteroscopy, and radiographic imaging] on the identification of the origin of bleeding in the majority of patients. In the more recent definition, the term OGIB is reserved for cases in which bleeding’s origincannot be identified in the gastrointestinal(GI) tract and may represent a cause of bleeding outside the small bowel. However, in the present study, the term OOGIB also includes small bowel bleeding being designed to investigate factors predicting a positive CE in patients with past OOGIB.

Several studies have investigated the factors predicting positive CE findings in the overall OGIB5-9. However, to the best of our knowledge, the clinical characteristics that predict a positive CE in patients with past OOGIB have notbeensystematically studied.

All patients presenting with the first episode of past OOGIB between September 2004 and December 2013, who underwent CE to identify the cause of bleeding at six centers of Northern (three), Central (one), and North-Eastern (two) Greece were included in the study.

According to the guidelines of the American Gastroenterological Association (AGA)10,patients were defined as having past OOGIB when they had a history of visible bleeding episode (melena, hematochezia), followed by nondiagnostic upper and lower endoscopy.

CE was performed on an outpatient/inpatient basis after bowel preparation with oral administration of four liters of polyethylene glycol solution. Patients were allowed to drink clear fluid two hours after ingestion and were instructed to maintain their normal activities during CE examination. Outpatients returned to the hospital eight hours after capsule ingestion and the registration device and the antennas were collected.

The interpretation of lesions responsible for OOGIB was made according to CE structured terminology (CEST) described previously11. The findings were considered clinically significant if they could be the cause of gastrointestinal bleeding: angiodysplasias, ulcers, neoplasms, multiple erosions, Dieulafoy’s lesion, hemangiomas, varices and aortoenteric fistulas. Findings such as small erosions, red spots, nonbleeding diverticula and nodules without mucosal breaks were inconsistent to potential bleeding and to record the CE as positive.

In the study only patients with excellent visualization (no debris, complete visualization of the mucosa) of whole small intestine were included. The recordings of CE were independently reviewed by six experienced endoscopists/gastroenterologists.

The patients were followed in the outpatient clinics or by telephone contact until the end of December 2013 to record rebleeding rate and clinical course. In cases of bleeding recurrence, CE was offered again when the cause of OOGIB had not been identified during the previous episode of bleeding. If upper gastrointestinal endoscopy and colonoscopy were performed in other centers [not participating in this study] and the etiology of the bleeding was identified, the diagnostic assessment was considered sufficient.

Categorical variables were analyzed with chi-square and Fisher’s exact tests, as appropriate, while continuous variables were expressed as their median and ranges and analyzed using the Mann-Whitney U test. Possible predictive factors for positive CE were examined by univariate and multivariate analyses and acalculated with odds ratio (OR) with 95 % confidence interval (CI), using a logistic regression method. Statistical significance was set at p <0.05. Statistical analysis was performed using the Statistical Package for Social Sciences (SPSS), version 19.0 (SPSS Inc., Chicago, IL, USA).

Between September 2004 and December 2013, 262 patients underwent CE examination for investigation of past OOGIB. Of these, 224 patients (118 men, 106 women; median age 70 years, range 17-86) fulfilled the inclusion criteria and were included in the final analysis. The remaining 38 patients were excluded because 23 had incomplete CE examination and in 15 patients the data of their files were insufficient. CE was completed uneventfully in all patients without any capsule retention.

The patient population was divided into two groups; those who had positive (group A: 118 patients) and those who had negative (group B: 106 patients) CE findings (Table 1). Demographic characteristics of patients in both groups are presented in Table 1. There was a significant difference in the median age between group A and group B (p =0.001) (Table 1). Thirty-two patients (14.29 %) were under anticoagulant (warfarin) treatment with a significant difference between the two groups (group A: 25 patients vs. group B: seven patients, p =0.009) (Table 1). Fifty-three patients (23.7 %) were under antiplatelet treatment (clopidogrel and/or aspirin) with 43 patients being in group A and 10 patients in group B (p =0.007) (Table 1). Forty patients (17.86 %) were under NSAIDs with a significant difference between the two groups (p =0.015) (Table 1). There was no difference on hemoglobin at the time of CE examination and units of blood transfused. Time of CE examination and other imaging modalities used between the two groups were also studied (Table 1).

Of the 118 patients with positive CE findings, therapeutic interventions were performed in 56 patients (47.46 %) (Argon plasma coagulation in 16 patients, surgery in 19 patients, cessation of NSAIDs in 20 patients, and TIPSs application in one patient with Budd-Chiari syndrome and portal enteropathy).

With a median follow-up of 16 months, recurrence of bleeding was observed in 39 patients (33.05 %, 35 with angiodysplasias, one with radiation enteritis, three with portal enteropathy) with positive CE and in only nine patients (8.5 %) with negative CE (group B) (p <0.001) (Figure 1). In the latter group, of the nine patients that re-bled, only two accepted to undergo another capsule endoscopy after negative upper and lower GI endoscopy. In both patients, multiple small erosions were identified, in both cases related to NSAIDs use. 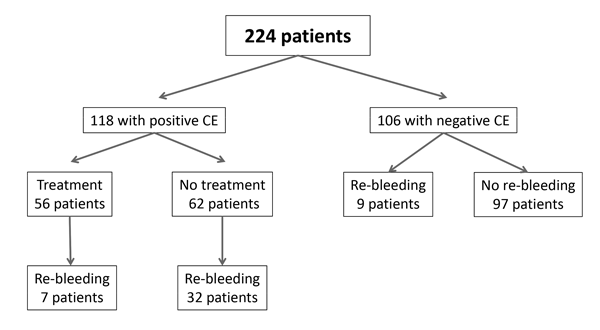 Figure 1: Flowchart showing patients’ re-bleeding rate for the 262 patients in this study that underwent capsule endoscopy between September 2004 and December 2013 for investigation of past overt obscure gastrointestinal bleeding.
CE: capsule endoscopy.

The present multicenter retrospective study is the largest one that investigates the impact of clinical characteristics on the diagnostic yield of CE in patients with past OOGIB. The overall positive diagnosis of CE in our series was 52.68 %, lower than in other studies with OOGIB12,13. This is not surprising because most experts in CE have found that the maximized yield of CE is achieved when the examination is performed as close to the bleeding episode as possible14,15. In our study, the median time interval from the latest bleeding episode until CE examination was ten days, a time not too close to bleeding episode. Furthermore, a statistically significant difference of median time interval from the latest bleeding episode until CE between the two groups was observed (positive findings group vs. negative findings group, 8 vs. 12 days respectively, p =0.032).

In this study, patients under treatment with anticoagulants, NSAIDs and antiplatelets had a higher rate of positive CE (Table 1). Multivariate analysis showed that age>65 years and treatment with these drugs are the clinical characteristics that predict positive CE in patients with past OOGIB. Clinical characteristics including medications relevant to the diagnostic yield of CE in OOGIB have rarely been investigated to date. The correlation of angiodysplasias, the leading cause of bleeding in our and other reported studies, with advanced age is well-known16; moreover, anticoagulants are well-recognized risk factors for gastroduodenal ulcers, postpolypectomy and postsphincterotomy bleeding and they probably have the same effect in patients with small intestine lesions17-20. Additionally, NSAIDs and aspirin are well-known causes of small intestine ulcers and multiple erosions which resolve upon withdrawal of the medications in most cases21.In our study angiodysplasias (54.24 %) were the leading cause of bleeding, followed by ulcers or multiple erosions and tumors, results which are comparable with other published studies22.Furthermore, we found a statistically significant difference in the re-bleeding rates between positive (33.05 %) and negative (8.5 %) CE findings (p <0.001) (Figure 1), which is in accordance with the reports by Lai et al23 and by Riccioni et al24.Our findings underscore the specificity of the negative predictive value of negative CE in patients with past OOGIB and are valid in the long-term follow-up.

Taking into account that a significant number of patients with past OOGIB were under treatment with NSAIDs and the low re-bleeding rate in negative CE after a long-term follow-up we can limit the recommendations to perform CE in these patients and reduce the financial cost per patient. Nevertheless, before such recommendations become an established step in the management of patients with OOGIB and negative CE, sufficient evidence should be provided by future large-scale relative studies.

The main advantages of the current study are the large number of patients included and the long duration of follow-up. The main limitations are the retrospective design of the study and the inter-observer variability in the interpretation of CE findings of the centers involved. We also acknowledge that there is new AGA guideline4 changing the classical term obscure GI bleeding; small bowel bleeding is not included anymore. In contrast, the term includes every GI bleeding that cannot be characterized as upper GI, colon or small bowel bleeding after performing extensively upper/lower GI endoscopy and CE. However this manuscript reports our clinical data from the period that CE had not yet been established as the gold standard method for assessing small bowel, therefore we used the older definition for OOGIB.

In conclusion, CE remains the leading examination in the investigation of past OOGIB. However, the selection of patients with high probability for positive CE could reduce the financial cost. Patients with OOGIB and negative CE had a considerably lower re-bleeding rate, thus further invasive procedures might be adjourned or might not be required in these patients, though such strategy requires further validation.