Background: Chronic myelogenous leukemia (CML) is a hematological malignancy that originates in an abnormal pluripotent bone marrow stem cell. CML is consistently associated with the expression of the BCR-ABL1 fusion gene, generated by the t(9;22) chromosomal translocation, thus creating the Philadelphia chromosome, a target for protein tyrosine kinase inhibitor (TKI) therapy. There is no published data, demonstrating increased risk for development of second cancers, associated with the exposure to TKIs.
Case report: We report a case of a primary extranodal marginal zone B-cell lymphoma (EMZBCL), diagnosed in a 53-year-old woman with CML receiving treatment with TKI the preceding seven years. Both diagnoses were confirmed by cytological/histological examination. Regarding CML, complete hematological, cytogenetic, and molecular remission was achieved by imatinib therapy. Regarding EMZBCL complete remission with an anthracycline-based polychemotherapy was achieved, while the patient was on continuous treatment with imatinib. Currently, the patient is in major molecular response for CML (151 months) and also in complete remission for EMZBCL (60 months).
Conclusion: We report this case as we consider that any secondary neoplasia developing in patients treated with TKIs should be reported for assessment and further detailed analyzes. Hippokratia 2016, 20(3): 241-243

Isaacson and Wright were the first who described certain extranodal lymphomas related to mucosa-associated lymphoid tissue (MALT), as a new separate entity rather than that of peripheral lymph nodes in 19831. These observations were extended later to include other extranodal low-grade B-cell lymphomas, especially those of salivary gland, lung, and thyroid2. At present, they were recently included both in the WHO-classification3 in the Mature (peripheral) B-cell neoplasms with the general term of marginal zone lymphoma (MZL), that includes the three closely related lymphoma subtypes: i) nodal, ii) primary splenic, and iii) extranodal lymphomas of MALT type.

Completely different is the chronic myelogenous leukemia (CML) which belongs to the myeloproliferative neoplasms (MPN) that originates in an abnormal pluripotent bone marrow (BM) stem cell. CML is consistently associated with the BCR-ABL1 fusion gene located in the Philadelphia (Ph) chromosome4. The BCR-ABL fusion protein mediates the development and maintenance of CML through interaction with multiple downstream signaling partners which result in altered cellular adhesion, activation of mitogenic signaling, and inhibition of apoptosis that lead to the transformation of hematopoietic stem cells. BCR-ABL-mediated signaling is also associated with defective DNA repair, resulting in additional chromosomal alterations and mutations, which may partly explain the aggressive nature of advanced CML5.Thereby, BCR-ABL1 fusion gene provides a target for tyrosine kinase inhibitor (TKI) therapy6. Imatinib mesylate, a TKI, is now standard therapy for patients with CML, and more than 80 % of patients accomplish a complete cytogenetic response (CCyR) and ≤ 70 % may attain a major molecular response (MMR) by five years of therapy6. Newer therapies with other TKIs (e.g. bosutinib, dasatinib, nilotinib) are effective after the failure of imatinib mesylate. More recently these TKIs as frontline therapy have shown superiority compared with imatinib mesylate7-9. However, with the success of TKIs in CML treatment and prolonged survival, questions arise regarding the possibility of late effects of TKI treatment, and especially about the possibility of developing other malignancies. Some data from case-reported studies show incidence of secondary malignancies during TKIs therapy where most of the patients had solid cancer and others had lymphoma10-12. Verma et al, reported a study of 1,445 patients with CML/MPN13. They found5 % cumulative incidence of non-Hodgkin lymphoma (NHL), i.e. chronic lymphoid leukemia, diffuse large B-cell lymphoma and myeloproliferative lymphoma, but the standardized incidence ratios (SIRs) did not reach statistical significance13. Additionally epidemiological analysis of Novartis suggested that exposure to TKIs increases the risk of developing second NHL14. The etiology of secondary neoplasias in patients treated with imatinib is unknown. In vitro studies have shown that imatinib inhibits CD4+ or CD8+ T-cell proliferation and activation, as well as it downregulates the antigen-presenting function of dendric cells (DC)15. In contrast, other studies have shown that imatinib enhances the antigen-presenting function of DC and fosters DC-natural killer (NK) cells reciprocal activation, thus promoting the antitumoral function of NK cells16. Therefore, it is still uncertain whether the subsequent tumor results from imatinib therapy, previous antitumor treatment or from other independent risk factors (e.g. age). For this reasons we consider that any secondary neoplasia developing in patients treated with TKIs should be reported for assessment and further detailed analyses. We report the case of myeloproliferative and lymphoproliferative neoplastic disorders, which occurred in the same patient. 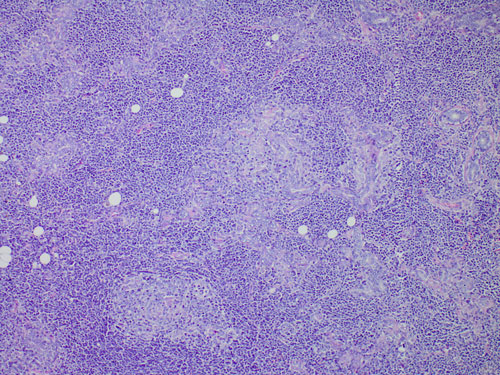 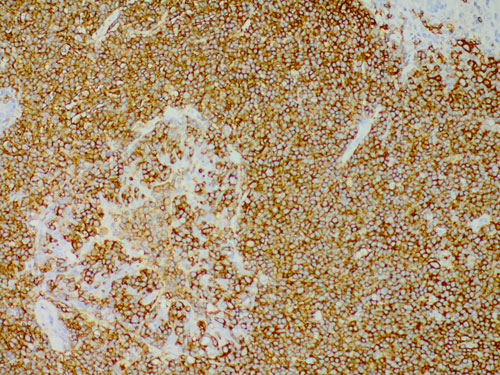 The first malignancy, CML Ph positive, the chronic phase was diagnosed by bone-marrow aspirate (hypercellular bone marrow aspirate smears) with a maturation pattern similar to that observed in the peripheral blood. There was a prominent increase of neutrophil myelocytes (“myelocyte bulge”) and segmented neutrophils. Dyserythropoiesis was absent or minimal. The number of megakaryocytes varied considerably. Moderate to marked megakaryocytic proliferation was observed. Blood film showed leucocytosis (WBC: 22 x103/µl) and this increase in the WBC count was largely due to neutrophils in different stages of maturation, with peaks in the percentages of myelocytes, and segmented neutrophils. The neutrophils were normal and there was no significant dysplasia. Blasts accounted for less than 2 % of WBCs. Absolute basophilia was observed. Red cells showed mild anisocytosis, platelets revealed no significant abnormalities, except for a single giant form. Cytogenetic examination conformed t(9;22) (M-BCR-ABL-b3a2 transcripts). Therapy with TKI (imatinib) was started in a standard dose of 400 mg daily. A complete hematological response was achieved one year after initiation of the therapy. On the eighteenth month CCyR and MMR were reported. Since the CML diagnosis was established imatinib has been given permanently.

Currently, the patient is disease free survival both for CML (151 months) and EMZBCL MALT-type (60 months).

EMZBCL account for approximately 9 % of all NHL with a frequency of primary origin in the salivary gland 26 %2. Like with other malignancies, etiopathogenesis remains unclear. Some findings suggest that MALT lymphoma is an antigen driven neoplasm associated with chronic antigenic stimulation by autoantigens17 and/or microbial pathogens18, inducing an accumulation of lymphoid tissue in the typical sites of involvement for each lymphoma entity. Less is known about the gene translocations which result to protein dysregulation, playing a role in the pathogenesis of MALT lymphomas. However, the mechanism of action of the protein products for the most frequent chromosome translocation in MALT lymphoma t(11;18)(q21;q21) and t(1;14)(p22;q32), was established. The fusion proteins (API2-MALT1 and over-expressed Bcl10), by synergism, lead to a block of the inhibitory IκB proteins which activate the NF-κB resulting in transcription of a number of different genes involved in inflammation, cell viability, immune response, and unregulated cell proliferation19. There is no evidence that imatinib used in the treatment of CML could promote certain steps in the described pathological pathways. Moreover, imatinib inhibits specifically the kinase activity of proteins that contain ABL, ABL-related gene (ARG) protein, or platelet-derived growth factor receptor, or KIT receptor20 for which there are no data to participate in NHL lymphoma pathogenesis or chronic autoimmune inflammation. Additionally, Verma et al13,after following-up 1,445 patients (CML/MPN or other hematologic malignancies) treated with TKIs for up to two years, concluded that exposure to TKIs did not increase the risk of developing secondary malignancies. This observation was in accordance with another independent study on 9,500 patients treated with TKIs14.

In conclusion, the described clinical case assumes with a high probability that the two hematological neoplasms could occur independently of each other.

We acknowledge the contribution of Petrov Y who helped in manuscript preparation.